View Results
Go to previous image Go to next image

Federal's Hydra-Shok JHP ammo is an excellent ammunition trusted by law enforcement agencies and carry-permit holders alike. This round features Federal's Hydra-Shok jacketed hollow points which utilize a unique center-post design that delivers controlled expansion. The notched jacket provides efficient energy transfer to penetrate barriers while retaining stopping power. The deep penetration of this jacketed bullet satisfies even the FBI's stringent testing requirements making this an ideal round for self-defense!

This is top of the line, American-made defense ammo made by ATK (same company that makes Speer Lawman, CCI, Blazer Brass, etc)

- it doesn't get any better.
Ballistic Gel Test 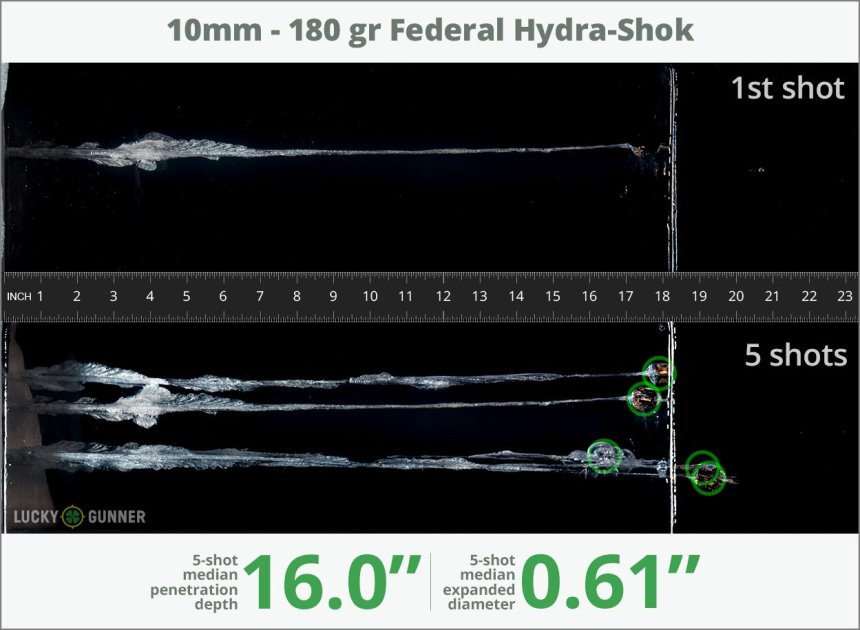 In order to find out how different self-defense handgun loads perform, we decided to do some ballistics gelatin testing of our own. The chart below is a compilation of expansion and penetration data for Federal 180 gr Hydra-Shok fired from 10 feet, through four layers of fabric (to simulate clothing), using a Glock 20 pistol.

The photo slider provides a close-up view of the bullets we recovered from the gelatin, and the video shows this load entering the gel in extreme slow motion.

The diagrams at the bottom of the page can give you an idea of how this load compares to other 10mm Auto self-defense loads that we tested.

We did a lot more of this ballistic gelatin testing, including over 100 different loads in a variety of calibers, so check out Lucky Gunner Labs for all the details.

How do the results for this Federal 10mm Auto compare to other Federal Ammo?

The most helpful favorable review

This round is doing exactly what Federal designed it to. There are a lot of full power loads and a lot of medium loads, ...
Read More

Please click here for our current in stock specials on 10mm Auto!

You may also be interested in these 10mm Auto products: