In the mid 1950s, still during the early years of the Cold War, the M1 Garand was showing its age.

First adopted as the standard issue rifle of the US Military in 1936, the Garand was more technologically advanced than any other widely issued service rifle on the battlefield at the time. But then WWII came along, leading to countless innovations in the field of small arms. After two decades in service, the M1 offered few advantages over the weapons being issued to rivals of the US.

After much debate, the controversial replacement for the M1 was finally announced in 1957 — the Garand-based M14 rifle. Along with this change also came the end of the .30-06 Springfield as the US military’s primary rifle cartridge, first introduced in 1906 with the Springfield 1903 bolt action rifle. The M14 was chambered in the new 7.62×51 NATO cartridge, which shortly thereafter would be re-branded and introduced commercially as the nearly identical .308 Winchester.

The new .30 caliber round had a short-lived role as the standard cartridge issued to the American infantryman. After only five years, the M14 was ditched in favor of the M16 using the intermediate 5.56×45 NATO cartridge. Despite its metric counterpart being snubbed by the military, .308 Winchester meanwhile steadily gained popularity on the commercial market where it was frequently compared to the venerable .30-06.

A rivalry was born and ever since, competition shooters, hunters, and keyboard commandos from every corner of the country have argued over which cartridge is “better” in the great .308 Win versus .30-06 Springfield debate. 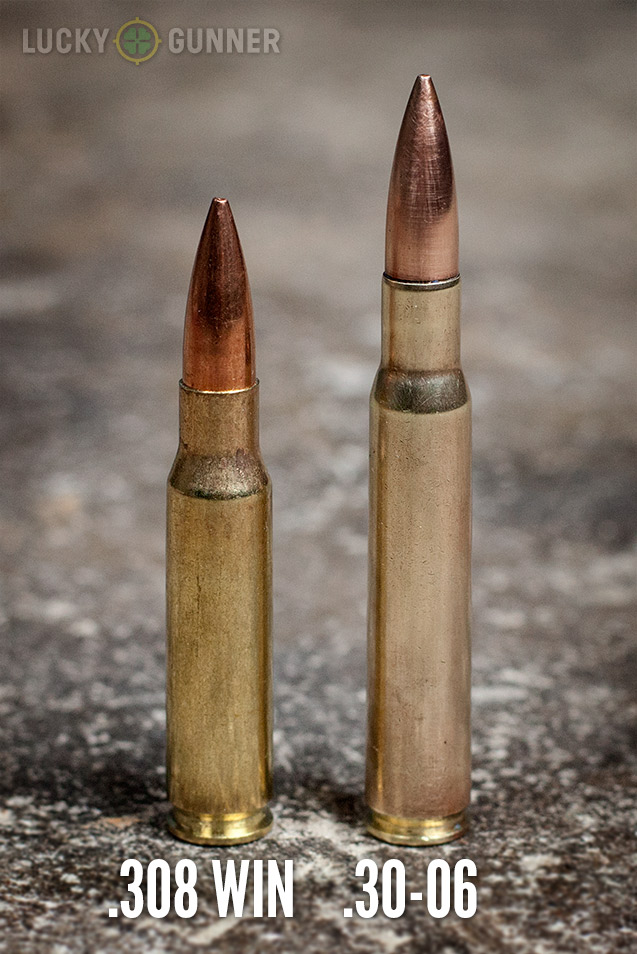 On the surface, .308 and .30-06 share many common traits. They both use bullets of identical .308-inch diameter in a weight range typically around 140-180 grains. Both are respected for their accuracy, moderate recoil, and impressive effective range (nominally 1000 yards, depending on who you ask). Either cartridge is suitable for hunting nearly any medium or large game on the North American continent, with the possible exception of some of the bigger bears. Military snipers and marksmen continued to use rifles chambered in both .30-06 and 7.62×51 for decades after their respective service rifles were dropped from general issue. With so much in common, what actually distinguishes these cartridges?

The most apparent distinction between the two is case length, which is nearly a half inch longer for the .30-06 than the .308 Win (2.48” versus 2.015”). This shorter case length is what the military was after when they were searching for a replacement for the .30-06. New and more efficient propellants that had been developed since the advent of the .30-06 in 1906 were able to push a bullet to the same velocities with a smaller case capacity. Shorter cases meant shorter bolts and actions for the rifles firing them, which in turn would mean savings in weight and production costs. At least in theory.

This difference is still evident in today’s bolt action rifles. Most major manufacturers of bolt actions offer several calibers, but only two different action sizes: long and short. Short actions are slightly more compact, lighter, and have shorter bolts, which can be quicker to operate. Long actions can accommodate larger cartridges at the expense of greater size and weight. The .308 Win cartridge is usually found in short actions, while the extra case length of the .30-06 requires a long action rifle.

In many ways, the .308 versus .30-06 revolves around the issue of accuracy. When .308 was first offered to the public, .30-06 was the dominant cartridge for marksmen and competitive rifle shooters. However, shooters quickly found that .308 offered a slight accuracy advantage, and the old “aught six” was de-throned as the favorite precision cartridge of the country’s top marksmen. In fact, the increase in accuracy was so significant that competition organizers eventually had to shrink the size of the standard bullseye in order to avoid ties between .308 shooters.

Since that time several decades ago, both .308 and .30-06 have been well surpassed by still more accurate cartridges that now dominate the precision shooting sports. But for us “Average Joe” shooters, the wide availability and (relative) lower cost of .308 and .30-06 keeps the debate raging.

Developments in cartridge technology have more or less leveled the playing field between the two cartridges, and today .30-06 loads are not so easily outshone by .308 as they were in the 60s. Comparing similar bullets from either cartridge fired in similar rifles, .30-06 may have a slight edge in terms of velocity, but .308 will have slightly less recoil. The difference in bullet drop between the two will be negligible.

Hardcore accuracy geeks will probably keep the race going for some time, but for all practical purposes, both cartridges are extremely accurate out to 600-800 yards with the right rifle in the hands of a skilled shooter.

With similar bullet weights, similar trajectory, and next to no difference in accuracy, it would stand to reason that .308 and .30-06 are also equals for hunting game. Hunters’ opinions on the matter will usually come down to anecdotal evidence and a critique of the available factory hunting loads for the two calibers, but that, of course, only tells part of the story.

While it would seem that performance is very similar for factory ammo, the .30-06 still has a bit more case capacity than the .308. You’ll find plenty of hand loaders who swear by .30-06, because they can add more powder and load them slightly hotter, giving a little extra punch over the .308. The success of these experimental loads, of course, depends on the rifle being able to handle these higher pressures and the hand loader knowing what he’s doing. But again, if we assume factory ammo and the shooting skill of the “average” hunter, distinguishing between the effectiveness of these two rounds is splitting hairs.

Looking at the selection of rifles available in these two calibers, its not hard to figure out that fans of .308 Win have far more to choose from than devotees of .30-06.

Because of its origins as the primary NATO cartridge for much of the 20th century, there have been many automatic and semi-automatic military rifles designed around the 7.62×51. As a result, there are a plethora of magazine-fed semi-auto derivatives of these rifles commercially available in .308 Win like the various clones and offspring of the HK G3, FN FAL, M14, and of course, the AR-10.

.30-06 was used almost exclusively by the US military, so If you want a semi-auto chambered in the older cartridge, you’re limited to the M1 Garand and a tiny handful of obscure commercial offerings. And although .30-06 once dominated the hunting rifle market, most of today’s bolt action rifle makers offer a wider selection of products chambered for .308 Win.

Ammo shopping tells a similar story. .30-06 is still one of the most readily available rifle calibers in the country, but most loads are designed for hunting with few choices for super accurate match ammo. Deserved or not, .308 has developed a stronger reputation as a well-rounded cartridge that’s great for hunting and precision shooting. As a result, you’re just as likely to find premium match ammo in .308 as you are to see .308 hunting loads that rival the .30-06 offerings. On the other hand, those interested in rifle cartridge hand loading may prefer the versatility offered by the additional case capacity of the .30-06.

I can’t really pretend to be unbiased here. I’m more a fan of .308, but purely because of the wider selection of rifles and factory ammo. When it comes to actually putting lead down range or in the field, I can’t think of anything I would do with a .308 that could not also be accomplished just as efficiently with a .30-06. So to anyone trying to choose between the two calibers, my advice would be to not worry about which caliber is more lethal or more accurate. Take a look at the practical and logistical factors, find the rifle you like in either caliber, and be confident that no matter which you choose, it will perform.

Goodbye Low and Left: 8 Ways to Cure a Flinch

Recoil anticipation. Pre-ignition push. Heeling. It goes by lots of names. If you want to improve your handgun shooting, at some point...