6 Features of a Home-Defense Shotgun

In the last installment of our shotgun series, Kyle talked about how the defensive shotgun has evolved through history. Today, I’m picking up where he left off with a video that takes a more detailed look at some of the specific features to look for in a shotgun that’s going to be used for home defense. Although I used a Remington 870 as an example in the video, I’m not addressing specific shotgun models — at least not today. I’m assuming that you’re starting with a pump-action or semi-auto shotgun from a reputable manufacturer. Beyond that, most common shotgun models can be easily modified and accessorized to have the features I’m suggesting.

Video: 6 Features of a Home-Defense Shotgun

Because this is the Internet, someone is bound to be dismayed that I left out their favorite shotgun accessory. Here are a few other features commonly found on defensive shotguns and the reasons I didn’t include them in the video.

There is some debate as to whether a sling is a good idea on a home defense shotgun. On one hand, a sling allows the user to go “hands free” while still maintaining quick access to the shotgun. Detractors say that slings only get in the way on a home defense shotgun. While I can see the potential utility for a sling in some extreme circumstances, I lean heavily toward the “they’re in the way” camp. This is particularly true with a pump-action shotgun where the sling can actually prevent the slide from moving if you accidentally grab a handful of sling when you grip the forend.

If you need a hand free to do something like open a door or dial a phone, simply hold the shotgun with the other hand. One of the reasons I like to keep my shotgun relatively light and clutter-free is because that makes it easier to handle and use one-handed, if necessary. For a home defense gun, the odds of the sling being necessary in order for me to perform some non-shooting two-handed task are incredibly slim, but the chance the sling will impede the accessibility or usability of the gun seems far more likely.

There are two main reasons for a choke tube on a defensive shotgun. The first is to control the spread of buckshot. As we saw in the Buckshot for Home Defense video, some buckshot loads will throw an extremely wide pattern, even at moderate distances that could be encountered inside the home. A choke tube could be used to attempt to narrow the spread to a more manageable level, but I believe careful ammo selection would be a more effective method. There’s nothing wrong with experimenting with a choke if your shotgun barrel is already threaded for one, but with ammo like Federal Flite Control available, a choke is probably not necessary if a tight pattern is what you’re after. 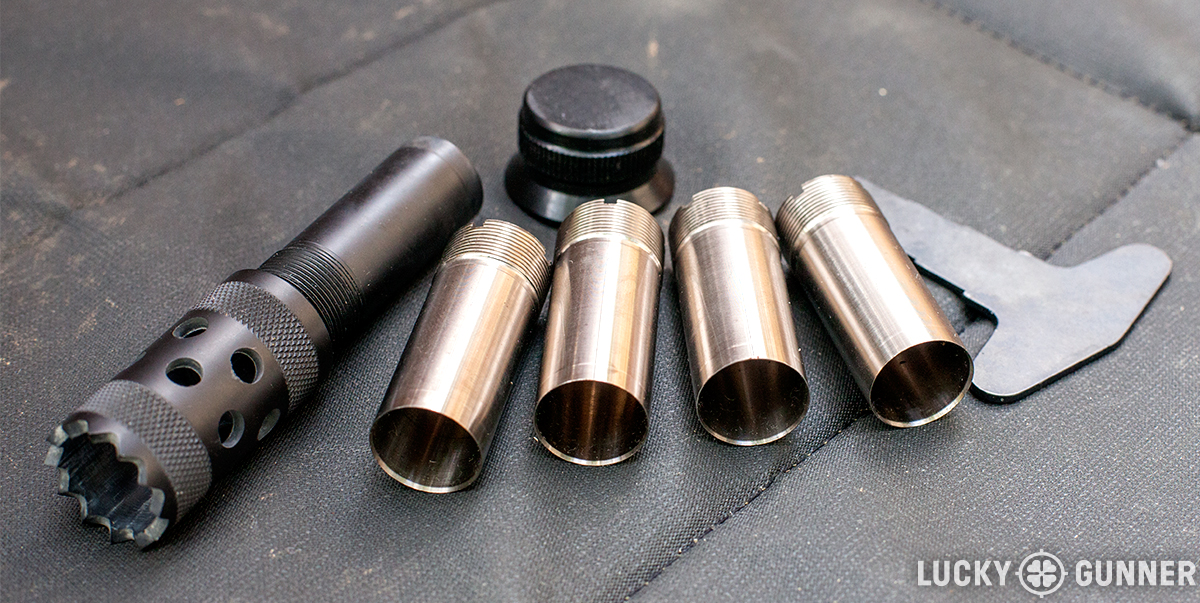 Another reason to use a barrel threaded for chokes on a defensive shotgun is to take advantage a choke with additional features beyond regulating the shot pattern. It’s common to see defensive shotguns sold with mean-looking ported breaching chokes. These devices add “teeth” to the muzzle so that the designated breacher in a tactical entry team can brace the barrel when shooting door locks or hinges. For the average citizen, they serve absolutely no purpose other than to make your shotgun look neat. If that’s your thing, then go for it, but it’s not something I’d consider a critical feature on a home defense gun.

Pistol grip stocks (the kind with the shoulder stock attached, not the dreadful stock-less pistol grip only) on defensive shotguns were all the rage not too long ago, but they seem to have faded in popularity in recent years. I can’t account for the change in public opinion, but in my personal experience, they don’t really add much utility to the shotgun, and they really get in the way with certain reloading techniques. Some shooters report that a pistol grip reduces felt recoil and offers better control. I’ve found that a correct stance and a stock with a shorter length of pull have a far greater effect on recoil mitigation, and none of the pistol grip stocks I’ve tried have had a short enough LOP to fit me well.

The one thing I’ve found a pistol grip does well is to make the shotgun much easier to manage one-handed. Fortunately, the Magpul stock offers the same benefit without any of the drawbacks of a dangling pistol grip, so I’m pretty sold on that design. I wouldn’t necessarily discourage anyone from using a pistol grip stock if they found that it had some specific benefits, but it’s not something I’d generally consider to be a huge advantage on a home-defense gun.

Fighting with the Glock 43

There's only one reason to carry a small gun like the Glock 43 instead of a larger and more effective...