The week before last, I posted some thoughts about the age old question of whether revolvers are still relevant for self-defense in a world with dependable and affordable semi-autos. I ended with the promise to dig deeper into the topic over the coming months, and that’s going to take the form of Wheel Gun Wednesdays. Every Wednesday from now until… well, whenever I feel like stopping, our topic on the Lounge will be revolvers in the role of personal protection. If you’re not a fan of revolvers, then you’ll have to wait until I do Glocktober or something. For now, watch Dirty Harry a couple of times and try to enjoy the ride.

This year’s SHOT Show did not have a particularly impressive showing in the concealed carry department. There were a few worthwhile variants of old releases (some of which we’ll get to later this week), but almost nothing in terms of truly new compact handgun designs. One of the sole exceptions came from an unexpected source; the German handgun manufacturer Korth. They’re known for their series of high-end revolvers with price tags typically no lower than $3000 and often much, much higher. 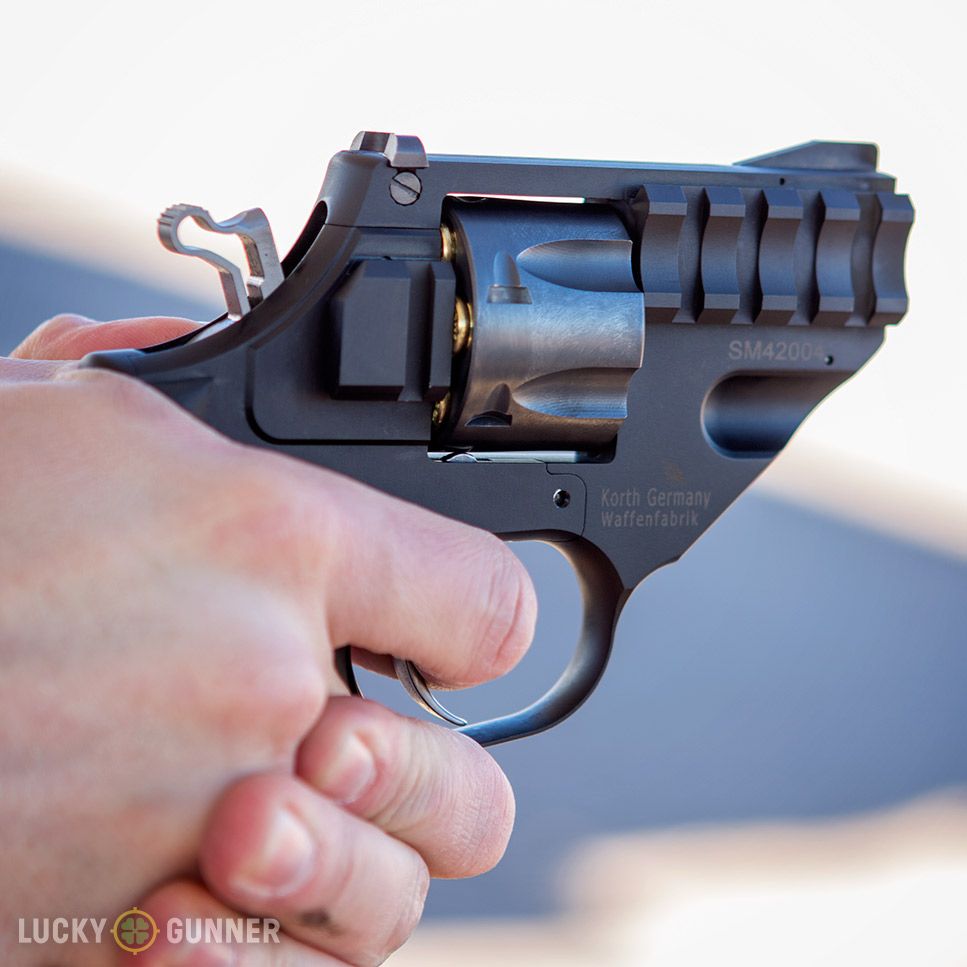 The week before SHOT kicked off, Korth announced a new revolver with a more accessible price predicted to be in the $900-1000 range. The Korth Sky Marshal is a 6-shot 9mm revolver that, unlike most 9mm revolvers, does not require moon clips.

The 9mm cartridge is designed for semi-autos, so it lacks the large rim that’s found at the base of revolver calibers like .38 special. Without this rim, a 9mm cartridge needs a little outside help if it’s going to be used in a revolver. To properly chamber the cartridge, most 9mm revolvers include a “ledge” inside the chambers of the cylinder. This ledge catches on the front or “mouth” of the 9mm shell casing to hold it in place — the same principle used in the chamber of most 9mm semi-auto pistols.

The other challenge is extraction, and this is where the Korth is a little different. The traditional solution for most revolvers firing semi-auto cartridges is to use moon clips — thin circular pieces of sheet metal with holes cut out to clip the cartridges together at the base. They work pretty well most of the time, but if the clips become warped or bent even slightly, they can prevent the cylinder from rotating. It also tends to be a major pain to remove the spent shell casings from the clips and insert fresh rounds.

Instead of moon clips, the Korth has small extractor tabs built into the ejector rod. These spring-loaded tabs snap into the groove at the base of the cartridge case when the chamber is loaded. When it’s time to unload the spent casings, the little tabs force the casings to come out of the chamber when the shooter presses the ejector rod.

The Sky Marshal is not the first revolver to operate this way. Smith & Wesson came up with a very similar solution in the 1980s with their model 547. Unfortunately, the Smith was expensive to make, and never sold very well so they discontinued it after only five years.

More recently, budget revolver maker Charter Arms has released the 9mm Pitbull with the same kind of extraction tabs on the ejector rod. Based on the scattered reports and reviews that I’ve seen, the Pitbull does not seem to have particularly reliable extraction.

So what makes Korth think they’ll be any more successful with this concept than S&W or Charter Arms? I’m not entirely sure, but one thing they’ve done differently with the Sky Marshal is to build a revolver from the ground up with the 9mm cartridge in mind.

To my knowledge all other revolvers designed to fire semi-auto cartridges — either with or without moon clips — have been based on existing designs. There’s not necessarily any problem with this from a functional standpoint, but it does mean that these revolvers tend to be larger than they actually need to be. 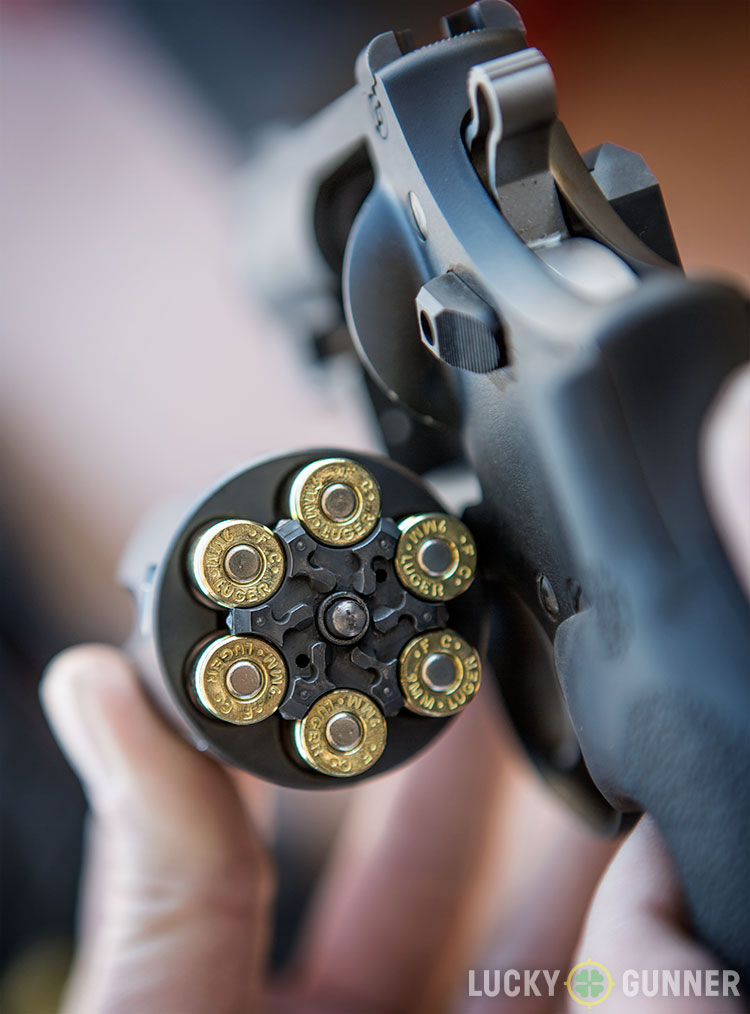 The overall length of a 9mm cartridge is about .4 inches shorter than a .38 special and nearly half an inch shorter than a .357 magnum. With a shorter cartridge, you could theoretically use a shorter cylinder and therefore a shorter frame. In the past, gun makers have not deemed it cost effective to go back to the drawing board and re-engineer the whole thing from scratch just to take a chance on a 9mm revolver that may or may not sell.

But if you’re Korth, you can get away with charging $1000 for a wheel gun to recoup some of that R&D cost. And that’s exactly what they’ve done. The Sky Marshal is roughly the same size as a S&W K-frame that’s been compressed in the middle to make it significantly shorter. The end result looks a bit odd, but should theoretically make the Sky Marshal more comfortable to carry than a more traditional revolver with equal ammo capacity and barrel length.

I like this approach to making a 9mm revolver in theory, but I’m not ready to plop down ten Benjamins for one just yet. First, I want to know if the thing actually works. I got to fire a couple of cylinders through the Korth at the SHOT range day and it extracted those 12 rounds just fine, but I’ve heard that the same wasn’t true for everyone who stopped by to try out the Sky Marshal. Was the gun being properly cleaned and maintained by the Korth reps at the booth? Did the shooters know what they were doing? I’m not sure, but some further testing seems warranted.

Beyond the functional issues, the Sky Marshal isn’t exactly set up to be ideal for concealed carry. For starters, there are two picatinny rails machined into the right side of the frame. Yes, they are part of the frame, not detachable. So unless you’re really good with a hacksaw or Korth has a rail-less variant they aren’t showing us, your Sky Marshal is coming with extra built in pointy bits to snag on your cover garment. 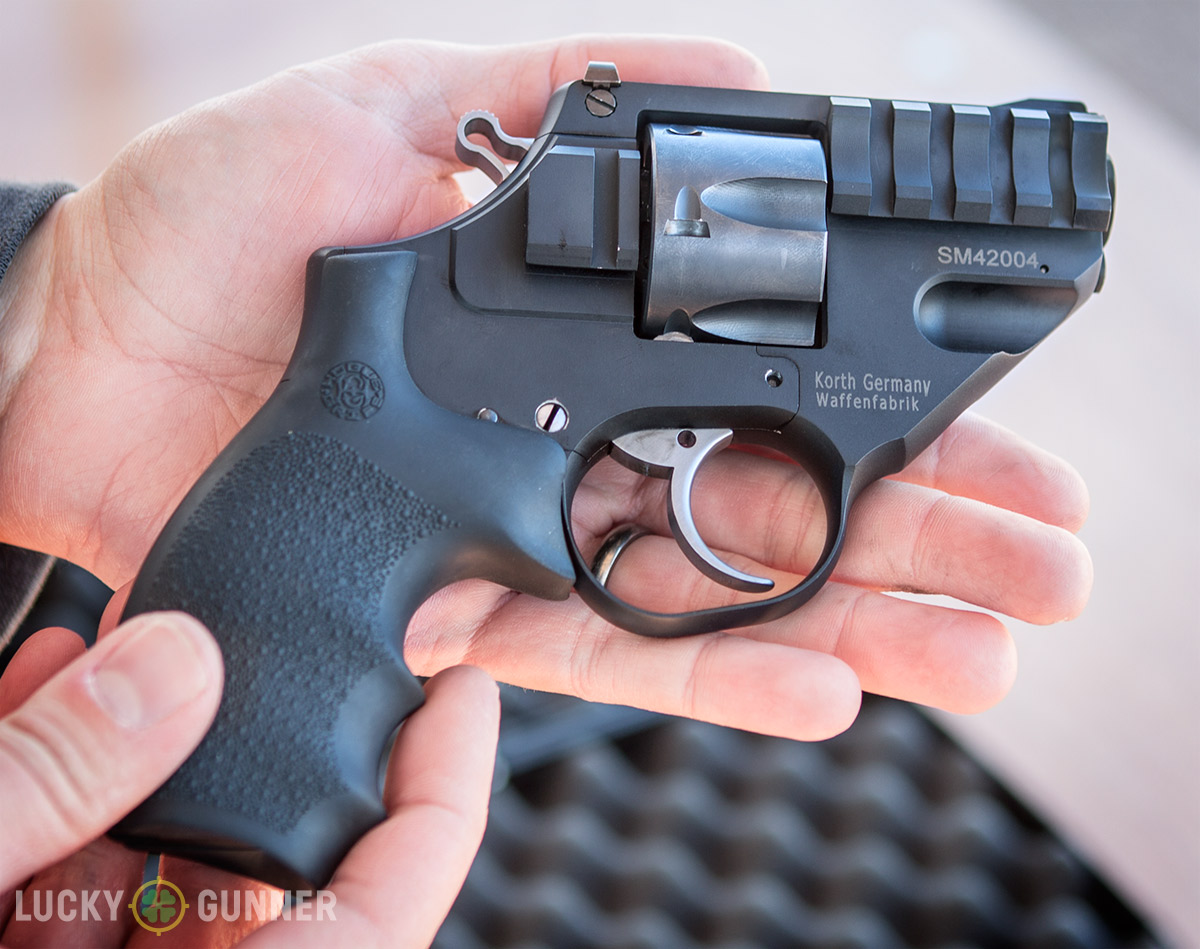 And speaking of snagging, there’s also an exposed hammer. There’s no good reason for an exposed hammer on a self-defense revolver and especially not one with a trigger as light and smooth as the Sky Marshal’s. On the other hand, Korth is certainly not the only revolver maker who insists on this practice, and they at least had the courtesy to round off the hammer spur.

Then there’s the issue of the grip. It’s huge. I’m not even talking about the abominable finger grooves on the rubber Hogue grip panels. You can always hack those off with a Dremel if it comes to that. But the actual grip portion of the frame is another matter. Designing the gun to be shorter overall was a great move, but they’ve done nothing to minimize the bulk of the part of the gun that’s most difficult to conceal. 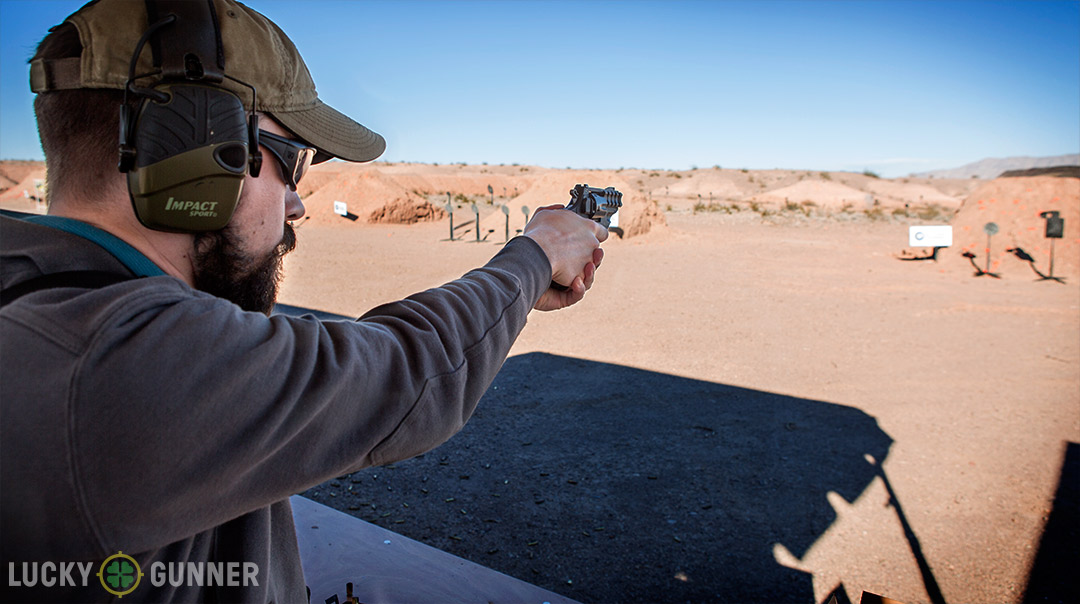 All of these issues I attribute to the very real possibility that no one in the Korth company has ever actually carried a handgun concealed and may not know anyone who has. I don’t mean that as a cruel jab at their product — I just think it’s probably true. None of the Korth reps at SHOT seemed to speak English very well and I’d say it’s unlikely that any of them have a firm understanding of the American concealed carry market.

And that’s a shame, because there’s a lot here to like. At just under 20 oz, the Korth would be a breeze to carry all day. The recoil is very managable. The double action trigger is fantastic. The sights aren’t my favorite style, but they are plenty large enough, and easy to use in good light. With the shortened frame length in a 6-shot revolver, the Sky Marshal has the potential to give me a reason to want a 9mm wheel gun for something other than the marginal ballistic benefit the caliber provides over .38 +P. But with the Sky Marshal in its current form, it’s doubtful that potential will be realized.

When I first heard about the new Leupold D-EVO optic, the first thing that came to mind was, of course,...