It’s time for another edition of Stuff John and Chris Wanna Know! This time, we’re looking at what pistol ammo does at 100 yards. Calibers tested were 9mm, .40 S&W, .45 ACP, and .357 Sig. We compared bullet velocity at the muzzle and 100 yards and also fired some rounds into ballistic gelatin. The results were a bit unexpected (especially for .357 Sig…). Details in the video below or scroll  down to read the full transcript!

CHRIS: Hey guys, Chris here from LuckyGunner.com with John Johnston from Citizen’s Defense Research and it’s time for another episode of “Stuff John and Chris Wanna Know“. John, what is it we wanna know today?

JOHN: What we want to know today is how handgun bullets perform at longer distances. Specifically, at 100 yards. And this kinda stems from the last time we were doing stuff, we happened to have gel with us and…

CHRIS: We did the shotgun stuff and we threw a couple rounds pistol to see what happened.

JOHN: Yeah, and it was like, “Oh, wow, maybe that’s something we want to know.” And here we are.

CHRIS: So, what we’re looking at is velocity change over that distance and then we shot it into gel to see what it would do in ballistics gel. There’s not anything specially, really, about 100 yards. It’s the same as just shooting the gun out of a shorter barrel or something like that — anything you would do that would slow down the bullet, but now we get to find out not only what it does at those lower velocities but how much velocity it loses over 100 yards.

The way we were able to get the velocity at 100 yards is with the Lab Radar chronograph. It’s not actually a chronograph, it uses Doppler radar to measure the bullet from the muzzle to the berm so it can give you velocity readings at various increments. I had it measure the velocity at the muzzle at right at 100 yards, so that’s how we were able to get that. Otherwise, we would have a shot-up chronograph sitting at the 100-yard line. 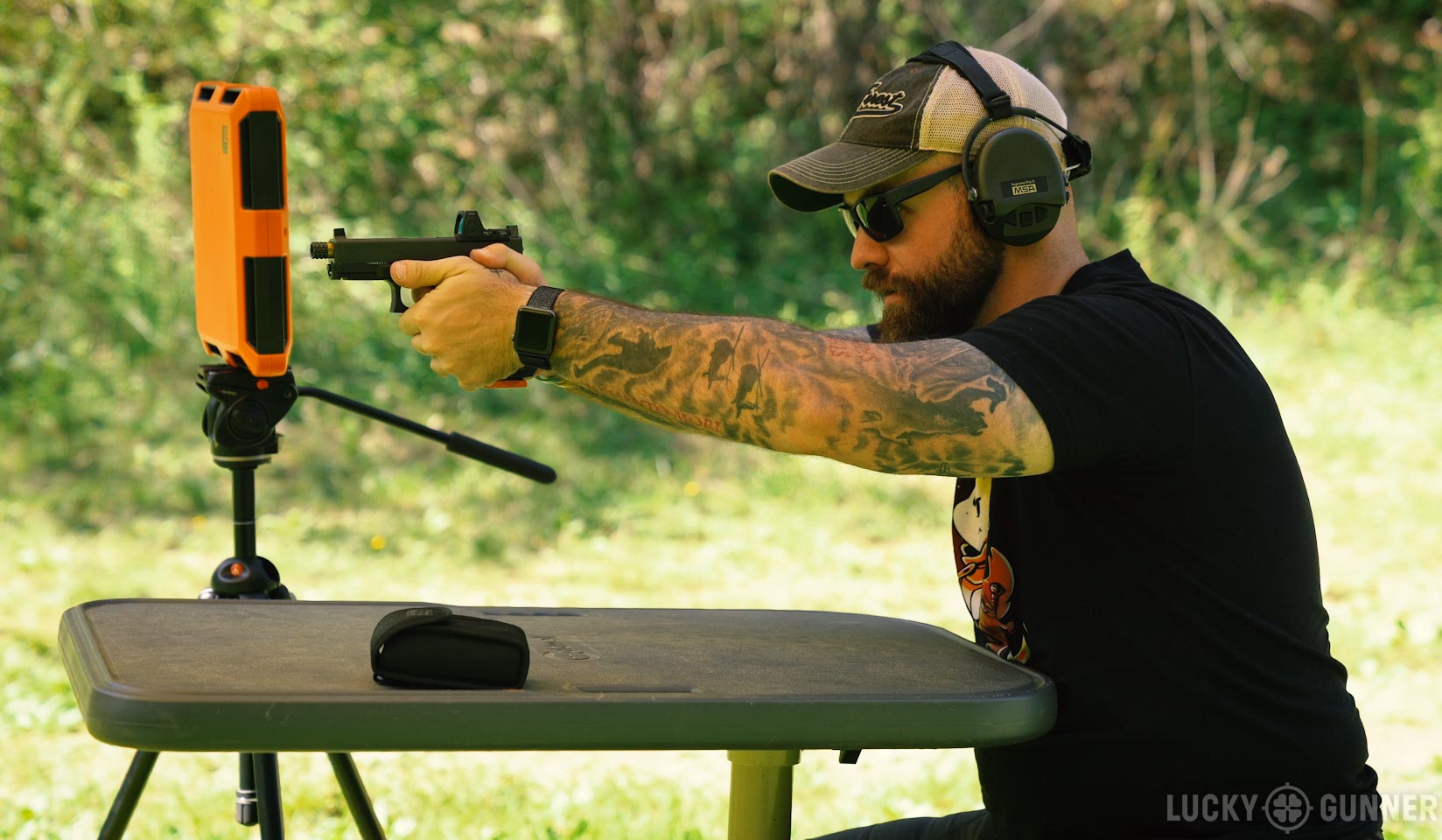 JOHN: For whatever reason, we forgot the basic tenets of physics and were super surprised when the lighter, faster stuff did not retain velocity or momentum as well as the heavier stuff. Going into this — and I don’t know why this is, because I’m trying to think back to where I got this idea — going into this, I expected .357 Sig to be like the king of the heap and it’s like, “well, if I’ve got to shoot something at long distance, I want to do it with the .357 Sig.” And the .357 Sig, out of everything, did the worst.

CHRIS: Right, so there’s this long standing reputation, for whatever reason, that .357 Sig has as being a great bullet for longer range, both in terms of ballistics and the lack of bullet drop. It supposedly has a flatter trajectory than other pistol bullets. But we did not find that to be the case. The lighter and faster bullets not only lost more velocity but lost a larger percentage of their velocity. And we’ll put up a chart for you guys to see with the magic of editing. 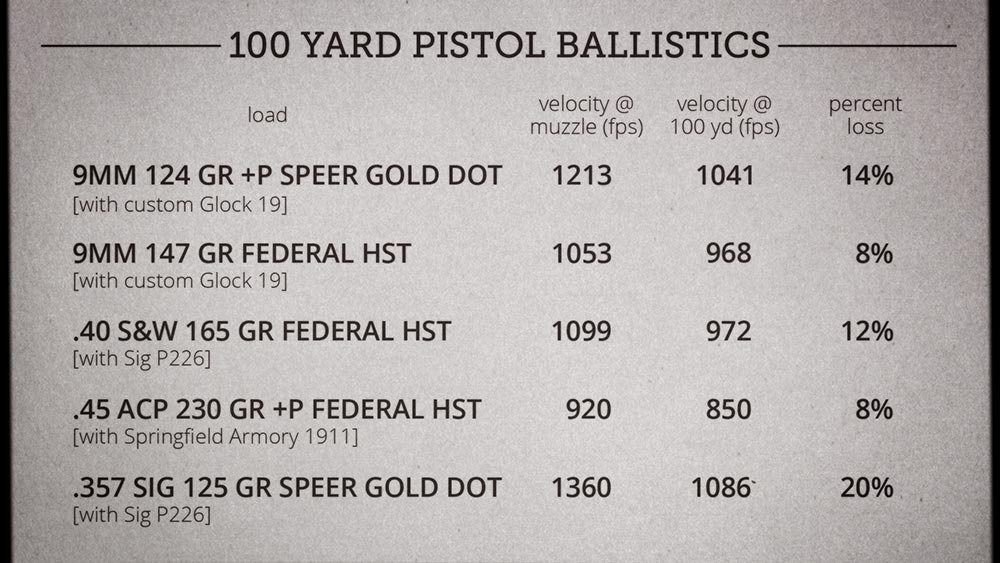 The heavier bullets are losing less velocity but they’re also losing a smaller percentage of that original velocity. It was 8% for those heavier bullets — the 230-grain .45 and the 147 HST. The others lost a lot more. The .357 Sig lost 20% of its velocity — something like 2-300 feet per second between the muzzle and 100 yards. So, John, why don’t you talk about what effect that had in the gelatin.

JOHN: So, what people need to understand about handgun bullets — well, about all bullets, but handgun bullets, specifically — is that they are designed around a certain velocity window. Too fast, you overdrive the bullet, they open up and don’t penetrate deeply enough because they expand too much or they start shearing petals off, which will decrease the frontal surface area and create a smaller wound track. Too slow, and they don’t expand at all and they act just like a full metal jacket.

If we assume that the muzzle velocity is firmly inside the projectile’s operating window — which is a safe assumption with all of the jacketed hollow points — if we assume that, then the further the deviation from muzzle velocity, the less effective the round is going to be. And the other thing that you’re running into is that the rounds that are designed to be a higher velocity round — so we’ll use .357 Sig as an example — cannot have as low of an operating window because if it did, it wouldn’t work at the muzzle velocity. It would be over-driven and would not function well. So that bullet is designed to be launched from a handgun around 1350 feet per second… 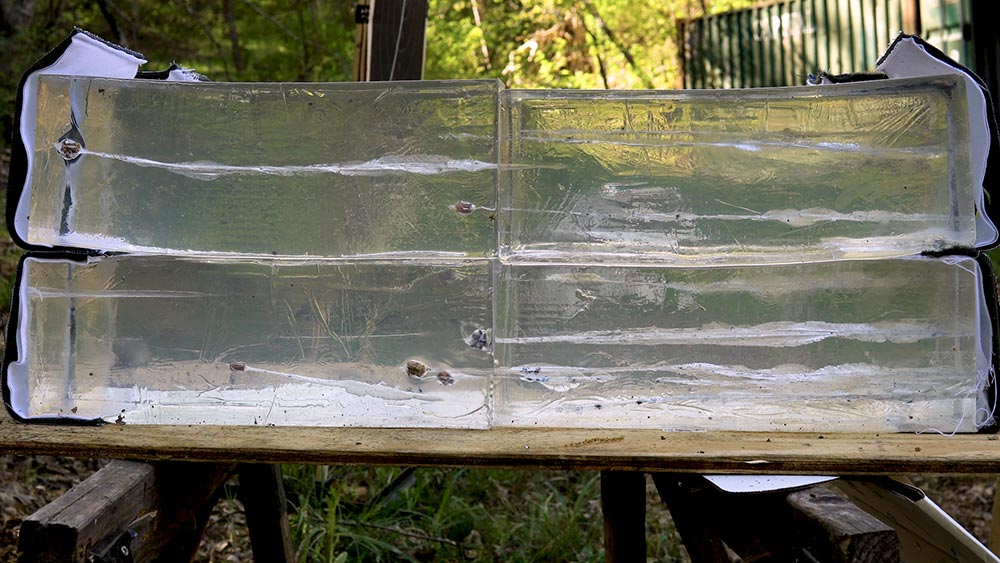 These are all loads that perform well in a typical 10-foot ballistic gel test with a fabric barrier — they will penetrate 12 to 18 inches and expand to at least 1.5 times their initial diameter, so we’re looking to see if they still do that at these reduced velocities. Looking at the penetration first, the 9mm Gold Dot is doing well. The 9mm HST, also. The first of those HSTs actually entered from the side of the block at an angle and missed the fabric barrier. It penetrated about 15 inches, not the whole length of both blocks like it might seem on camera.

The .40 S&W HST is over penetrating by a few inches. We only caught one of the .45 HSTs but its penetration depth looks pretty good. And the .357 Sig — the first one that hit the blocks sailed all the way through and into the berm, so we put some extra fabric on the back to catch the next one. And then we got a third round into the block that stopped at about 25 inches. 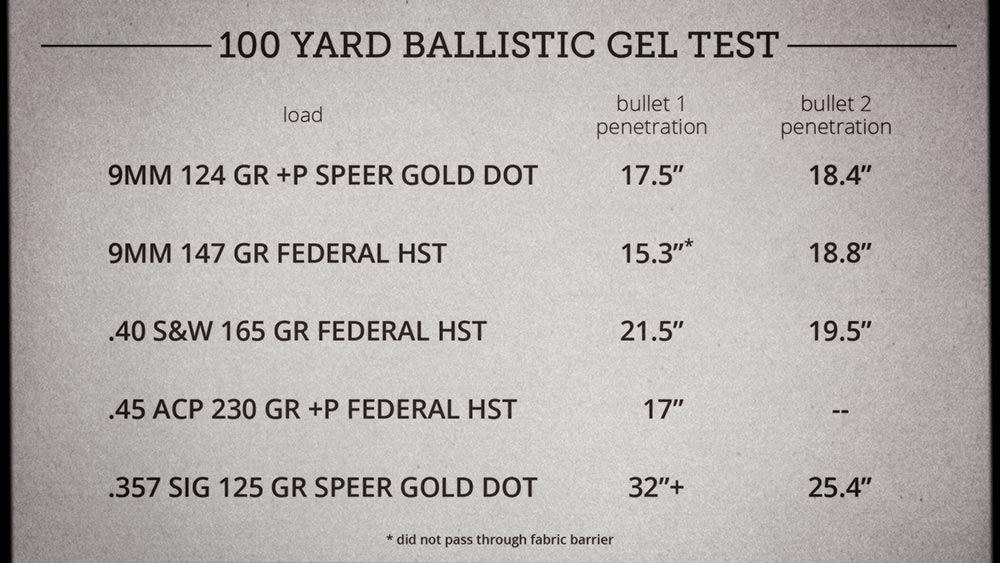 Here are the expanded bullets and you can see neither of the .357 Sig rounds we recovered expanded at all, which is why they over-penetrated. They were just moving too slow for that bullet design at 100 yards. The .40 S&W HST and the 9mm Gold Dot had uneven expansion and were starting to fail. The heavy-for-caliber 9mm and .45 Federal HSTs expanded very nicely, even at the reduced velocities. 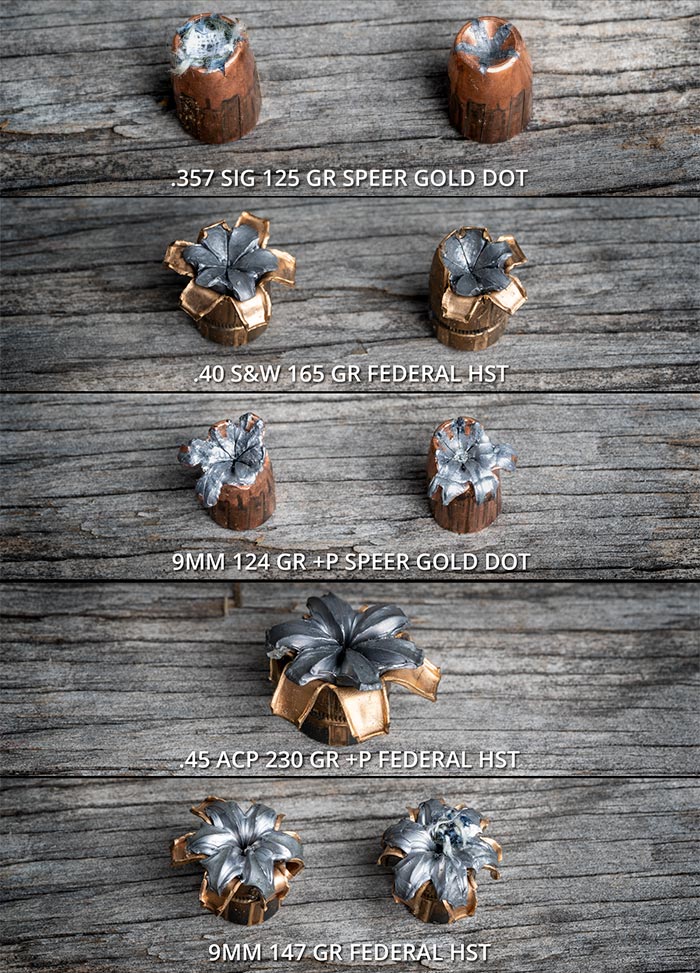 So with the .357 Sig, it was losing a lot of velocity, and it kind of looked like the bullet was dropping a lot. Now, we didn’t zero it at close range, so we don’t know for sure, but of the rounds we shot, that’s the only one where I was having to aim over the block in order to hit the block. So my guess would be, the bullet was dropping — if it’s losing 300 feet per second, it’s probably dropping.

JOHN: Yeah, if it’s losing 20% of its muzzle velocity in that short of a time period, it’s hard to imagine that it wasn’t just arcing in. Because it was literally like, for me at least — and I shot it, too — I was holding well over the target.

CHRIS: And that’s really the big takeaway here: it’s really hard to hit stuff at 100 yards with a pistol. And more than ballistics, what matters more is probably what you can actually hit with. If that’s something you’re concerned about — for example, we were using a Glock 19, kind of a custom Glock 19-type gun for the 9mm and John was able to hit the gel with the first couple of shots with the Gold Dot and then we went through two magazines with the HST, probably because that gun just doesn’t like HST, and that happens.

JOHN: And the other thing to keep in mind as well, if you are concerned about this sort of distance with a handgun, we weren’t shooting on something that was registering any feedback as far as, you know, a piece of steel or something is relatively easy to hit because you can — one: it’s larger. Two: you can sort of tell what’s happening.

CHRIS: You know if you’re hitting it.

JOHN: Yeah, you know if you’re hitting it very clearly. Making a 100-yard shot with a handgun on that target, with those guns, with that ammo, not knowing which ammo which gun liked is where it becomes problematic. And sort of like you said, with my gun with 124-grain +P Gold Dot — I have zeroed that gun for something that’s close enough that it didn’t matter that much — I hit the block pretty easily the first three out of five.

So, if you’re watching this video and you’re like, “that round performed way better than that round…” let me just pause you right there and say that I would rather have a round that doesn’t perform as well at 100 yards but is more accurate in my gun than I would a round that performs really well but I can’t hit anything with or place good shots on the target.

CHRIS: Setting aside the fact that this was not a huge sample size — we didn’t get a ton of rounds into these blocks — but the tentative takeaway would be that heavier-for-caliber bullets seem to work better ballistically at long distance than the faster, lighter bullets. But accuracy first: make sure you can hit the target before anything else.

JOHN: Yeah, and — man, I’m sad because between some of the stuff that you’ve posted and this — I’m like a die-hard .357 Sig guy and it’s like my kid is going to a meet or something and I’m in the stands jumping up and down and cheering and like, “oh, I don’t — my kid’s not so good.”

How does a pint-sized semi-auto pea shooter stack up against a stumpy snubnose wheel gun? In Part 16 of our...