How to Practice Your Drawstroke

So you want to be able to draw a pistol faster and more efficiently, but how do you actually go about doing that? You could, like most people, simply attempt the full draw stroke repeatedly at full speed. But that’s not usually the quickest way to improve, and you’ll probably pick up a lot of bad habits in the process.

One very effective method for refining the draw is to break it down into pieces and build speed gradually (both in live fire and dry practice). The exercise in the video below offers one way to work through that process at the range. As always, you can also scroll down and read the full transcript, but in this case, I’d recommend watching the video so you can see everything demonstrated.

Hey guys, Chris here from LuckyGunner.com. I’ve been traveling this week so I haven’t had a chance to sit down and edit the next big installment of our pocket pistol series. So instead of leaving you guys with nothing this week, I thought I would come out here to the range and show you a quick drill that I came up with. This is a pocket pistol specific drill. You can shoot it with any handgun but I’ve kind of designed it with a small compact handgun with a limited round count in mind.

What we’re going to be working on is the drawstroke and it’s really going to help if you have an understanding of the four countdraw stroke. I’ve got a video I did on that a couple of years ago, I’ll leave a link to that if you want to watch it refresh your memory. But just real quick, basically four steps: Clear the cover garment and grab the gun. That’s one. Two, bring the gun up here [just outside the strong-side pectoral muscle]. Three, bring the hands together. Press out and fire, that’s four.

That’s for an appendix carry draw, but it’s pretty much the same thing whether you’re carrying in a pocket or behind the hip.

The idea [with this drill] is to get repetitions with the drawstroke and to break it down into pieces so that we can smooth out any kinks and maybe make it a little faster. This isn’t a real flashy drill. It’s not real sexy to watch or anything but this is the kind of thing that we need to do at the range to build repetitions and build that muscle memory (for lack of a better term) in order to make the draw as smooth and as fast as we can make it.

All you’re really going to need for targets are three 3×5 index cards. You can put them on a target backer pretty much anywhere. Just make sure they’re oriented horizontally and there’s a good amount of space in between them. We’re going to do 10 shots on the first one, 10 on the second one, and 10 on the third one.

What we’re going to do on this first one is start at the number three position of our draw stroke. From here, we’re going to press out and do one perfect shot. We’re going to do that five times in a row, slow fire, no time limit. Just make it as perfect as you can and get a good solid hit right in the center of that index card.

Now, if you hit it with all five of those first shots — if you don’t have any outside the index card — for the next five we’re going to do it again but we’re going to add a time limit. On the first card, it’s going to be one second. That’s just kind of based on [my performance and what I would consider possible but difficult]. If you do miss any, for the second five shots you’re going to do it again but with no time limit. So 10 shots [total] slow fire, right into the center so you can make those shots as perfect as possible.

On the second card it’s going to be the same thing except instead of starting here at three we’re going to start at number one position of the draw stroke. So, cover garment is out of the way, hand is on the gun already [but still in the holster]. Draw, fire one good shot. Then go back into the holster and do it again. One good shot, five times right into this center of this index card. If you get all five of those, we’re going to do it again with a time limit. The time limit here is going to be one and a half seconds. So again, if you miss one of [the first five] you’ll do five more with no time limit.

For the last card here, we’re going to do the full draw stroke just starting in the holster [with hands relaxed at your sides]. Clear the cover garment, draw and fire a perfect shot. Five times [on card number three]. If you get all five of them in there, we’ll do it again with a time limit. The time limit for this one is going to be two seconds. 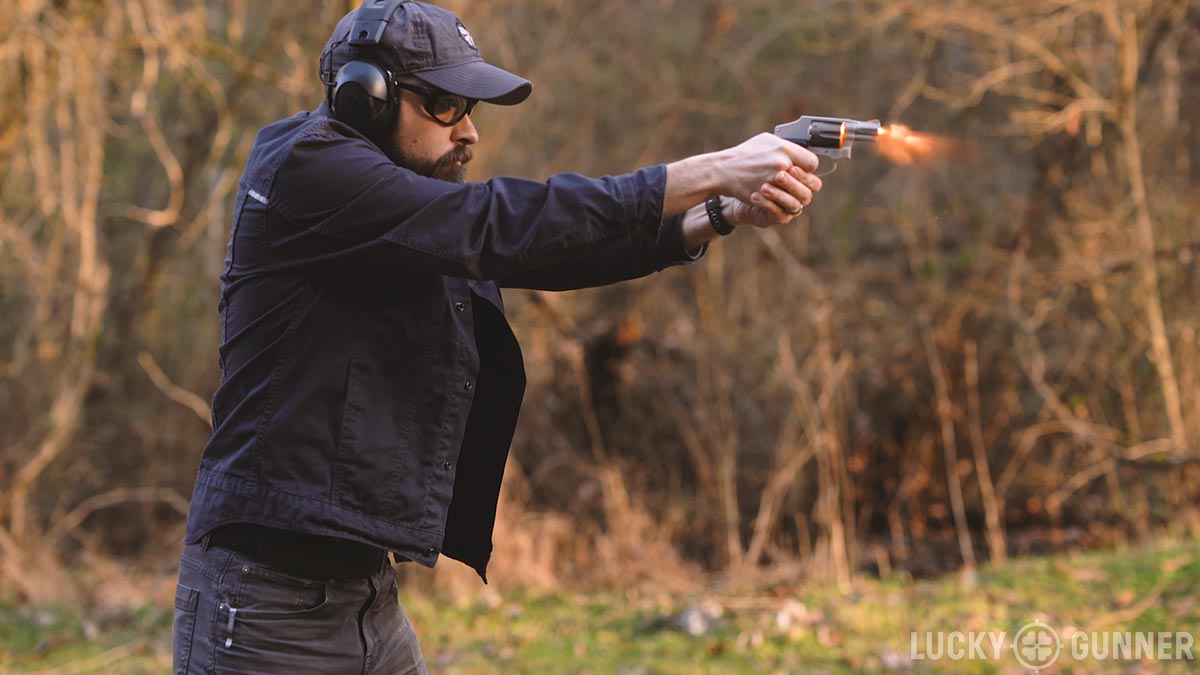 Alright, so one second [on the first card], one and a half seconds [on the second card], two seconds [on the third card]. That’s going to be fairly challenging but not outside of the realm of reason, depending on what kind of pocket gun you’re using and what method of carry you’re using. If you need to adjust those par times based on your skill level, feel free to do that. If you’re carrying in a pocket, you’re pretty much going to need to add at least a half a second to that because pocket draw is just inherently slower. Otherwise, I would suggest pushing the limit. Don’t give yourself something that’s going to be too easy. Make it difficult.

I’m going to demo that and hopefully that’ll clear up anything that didn’t make sense. In honor of our upcoming video on .32 caliber revolvers, I’m going to be using a Smith and Wesson Model 332 chambered in .32 H&R Magnum. Today, I’m actually using it with .32 Long ammo because that’s what I had in the ammo box.

I don’t think I mentioned this earlier — I’m at five yards. That’s where I’d suggest shooting this drill. Again, if you’re more of a novice shooter, you might want to bring it in to three yards but I think five yards is reasonably challenging enough.

Okay, first five shots, were going to be starting from number three position and it’s going to be slow fire, five rounds.

Alright, let’s take a look at the target. Looks like I got all five of them in there. A little over to the left but nice little group. I’m pretty happy with that. So now I’m going to do it again but I’m going to add the timer and see if I can get it under that one second time limit.

So I only made that one second time limit on one [of the five attempts]. I was really close on the rest of them. Let’s look at the target. I missed one — this was number four. So this is telling me that a one second par time is pretty good for me. This is where I need to be practicing because it’s not something I can do perfectly every time. I’m not hitting that time limit every time. But it’s challenging enough to give me something to work on.

Okay, we’re going to do our second 10. I’m going to start with my hand on the gun, my support hand and at centerline. In this case I’ve got my hand on my cover garment. If you’re doing behind the hip you’ll just have your hand right here on your chest. So starting here, five shots slow fire.

So, I threw two shots low, there. I was probably overthinking my trigger press a little bit. If I was doing this drill for real, I would do five more shots slow fire. But just for the purposes of the demo, I’ll do five more on the clock.

I got all five of them under the one and a half second time limit. But that might have been a little too fast. I should have been a little more careful on that trigger press because I missed — looks like two more. Another one almost missed, but it’s just barely in there. I’ll give that to myself. So two out of five misses. That’s probably one that I need to practice a little more.

For the last 10 shots, I’m going to do the full draw stroke. This might be a little tricky for me because I’ve basically got two cover garments to deal with and it’s easy to get tied up with that when you’re doing an appendix draw. We’ll see what happens. Five shots slow fire.

Okay looks like I’ve got all five in here. It’s not as clean as that first five I had on the first card, but I’m happy with this. And now I’m going to do it with the time limit.

I didn’t hit my two second time limit but I still missed a couple of them anyway. For my first shot, I had a really bad grip on the gun so I ended up with a funky trigger press and pulled one way down here. Second shot, I was still was rushing a little bit. Then I decided to just take my time and do what I needed to do in order to get a good hit which resulted in better hits. But I was a little slow on the clock so I probably need to work on clearing my cover garment a little more quickly. That might be where I’m losing some time there. But this is a good good place for me to be. It’s a good, challenging time limit. If you need to change the par times, again, feel free to do that. Give this drill a shot and let me know how it works out for you.

The par times I suggest in the video are assuming you’re using a subcompact or pocket pistol or small-frame snub nose revolver. If you’re using a full size or compact pistol instead, you might not find these times to be all that challenging. It’s easier to establish a solid grip on a larger gun and the longer sight radius often aides in acquiring an acceptable sight picture more quickly. For those guns, I would still suggest using a 1 second par time for the first string of fire, but try 1.25 for the second string, and 1.5 for the full drawstroke. Alternately, you can use the original par times, but back the target up to 7 yards.

Over the last few years, there have been some huge strides in the low power variable optics (LPVO) market, both...