Last week, I covered the importance of having some standards for shooting and measuring groups when doing accuracy testing. Group size is the closest thing we have to a universal standard for measuring accuracy, but there is no universally accepted method for performing these mini-science experiments. I suggested a few criteria that should always be considered when shooting groups with the qualifier that there may be many other relevant variables depending on the application. Now let’s take a look at a few of the specifics I skipped over in last week’s post.

How to Measure Groups

The way groups should actually be measured is not 100% agreed upon, but there does seem to be a general consensus among shooters on a correct method. In order to determine group size, identify the two hits that are farthest from one another and then measure the distance between them. Distance is measured from the center of one hole to the center of the other. Since it’s often difficult to identify the exact center of the bullet hole, the measurement can also be taken from the far edge of one hole to the far edge of the other, and then subtract one full bullet width from the total. 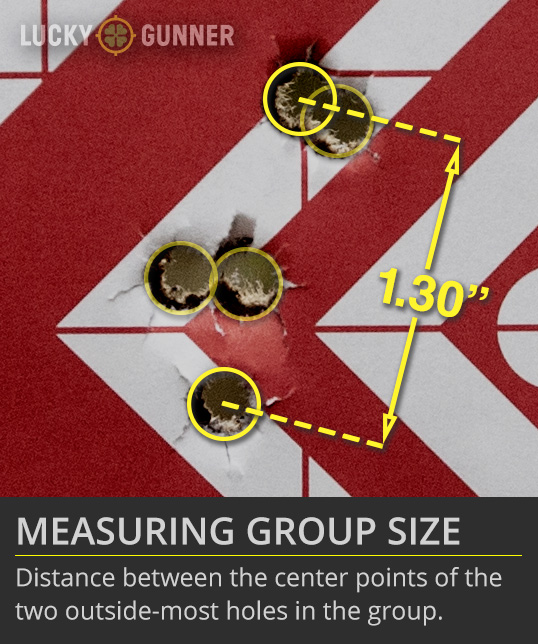 Here again, there is no set standard, and the number of shots necessary really depends on the circumstances. For most situations, I like five or ten shot groups. Ten shot groups provide a lot of data points, and they’re especially good if you only plan to fire one group. I often do this for testing handguns. Five shot groups can provide a lot of information too, and I like to fire no fewer than two or three groups to make any solid determinations about mechanical accuracy. If I have enough ammo, five groups of five shots is close what I’d consider ideal. There are a few times when I might shoot fewer than five shots in a group like in the process of sighting in a gun, or to confirm zero on a gun I’ve previously sighted in. Otherwise, I don’t consider a three shot group to provide much useful information on the inherent accuracy of a firearm. This is all personal preference, and you’ll have to determine an appropriate number of shots based on your own needs and willingness to fire ammo.

I once heard a veteran gun magazine writer say that the editorial standard of the publication he had worked for many years earlier was to fire ten groups of ten shots each for every firearm reviewed. Now that’s data. Unfortunately, not everyone has the time to do this, nor do they want to spend the money on 100 extra rounds of ammo just in the name of “good data”. But if you are inclined to do it, and set up everything properly, the information gathered could be an invaluable resource for others.

When your group looks pretty good except for one lonely shot that strays well outside the group, that round is referred to as a “flyer”. Sometimes shooters treat flyers like they would a Mulligan in golf and casually dismiss the errant round as a fluke. Whether a flyer should be counted when measuring a group depends on how the flyer ended up outside of the average. The flyer can probably be dismissed if there is an easily identifiable outside force affecting the shot. If the shooter jerks the trigger at the last minute and “calls” the bad shot before even seeing it on target, that’s an easy one to exclude from the data. Or maybe the shooting rest slips on the bench at the last second, pulling the rifle off target.

Usually, however, the source of flyers is harder to identify. When the barrel of the gun starts heating up after a few shots, the point of impact can change. Ammo is not always manufactured with great consistency. Fouling in the bore can cause errant shots and gradual degradation of accuracy. These causes are often difficult to uncover, so when flyers occur, the safest thing to do is simply shoot more groups. If there’s one flyer after shooting 50 rounds, then it’s probably safe to assume that it was some kind of fluke or shooter-induced error. One flyer in five rounds could be the sign of a problem, but there’s not enough data at that point to know for sure.

I put together the sample range report below after doing some accuracy testing with a Savage MkII FV-SR. At a recent shooting event, I switched ammo to a brand I hadn’t used in this gun before, and noticed I was getting much wider groups than when I last sighted it in. So I took the Savage to the bench to shoot a few groups with different brands of ammo to determine if my issues really were caused by the ammo, or if there was something else going on. Here’s what I got:

That’s all there is to it. From these results, it is probably safe to conclude that in this particular rifle under these conditions, the Wolf match ammo groups about 40% tighter than Remington bulk pack ammo. All this information is now in a notebook I keep in my range bag, and photos of the groups are saved on my phone so I can easily refer back to them whenever I take the Savage to the range. With this info posted online, it also serves as a reference for other shooters who are looking for information on the Savage Mark II FV-SR, the ammo I used, or any of the accessories like the stock, optic, and shooting rest. Shooting tiny groups is gratifying, but the real value is in recording as much information as possible about how those groups were achieved for future reference.

The problem with testing the accuracy of our guns is that even when we physically remove ourselves as variables with a nice shooting rest, it’s even harder to disregard the desire for our guns to be accurate. It’s exciting to see a perfect three-shot clover leaf group on target, and the temptation is to just quit while we’re ahead or, even worse, cling to that one group as the standard when subsequent testing indicates that it was the exception instead of the rule. Fortunately, even mass produced guns are far more accurate today than they ever have been and most of them are plenty accurate for any practical purposes. But as the bar for accuracy is raised, so are our hopes and expectations, and everyone wants to be the owner of the proverbial “tack driver”. There’s certainly nothing wrong with that, except when it leads us to avoid the cold hard truth as delivered by the holes on paper. Don’t lie to yourself; read what the target is telling you, believe the data, and consider all the variables involved.