A red dot that was working fine on my Sig P365XL suddenly decided to be not fine. Today, we’re taking a look at what happened and some lessons we can learn from it.

Details are in the video below, or scroll down to read the transcript.

Hey everybody, I am Chris Baker from LuckyGunner.com where you can get all your ammo with lightning fast shipping.

This is a broken red dot optic. I try not to ever let broken equipment go to waste. An equipment failure is always a chance to learn something or demonstrate something. I know the die-hard iron sights guys are probably going to love this. But my goal here is not to make an argument for or against optics. I think the pros generally outweigh the cons. But we have to acknowledge that optics add a layer of complexity to the firearm. They can be much easier to use than iron sights, but they’re more administratively complicated.

Problems with optics can be especially difficult to diagnose. This optic failed in a way I have never seen an optic fail before. So today I’m just going to talk about what happened and some things we might be able to learn from it.

The optic is a Holosun HS507K. Until a couple of days ago, I had it mounted on the Sig P365 XL. I’ve got the Swamp Fox Sentinel back on there for the time being. I had the Holosun on the Sig for more than a year and several hundred rounds and it was working just fine. 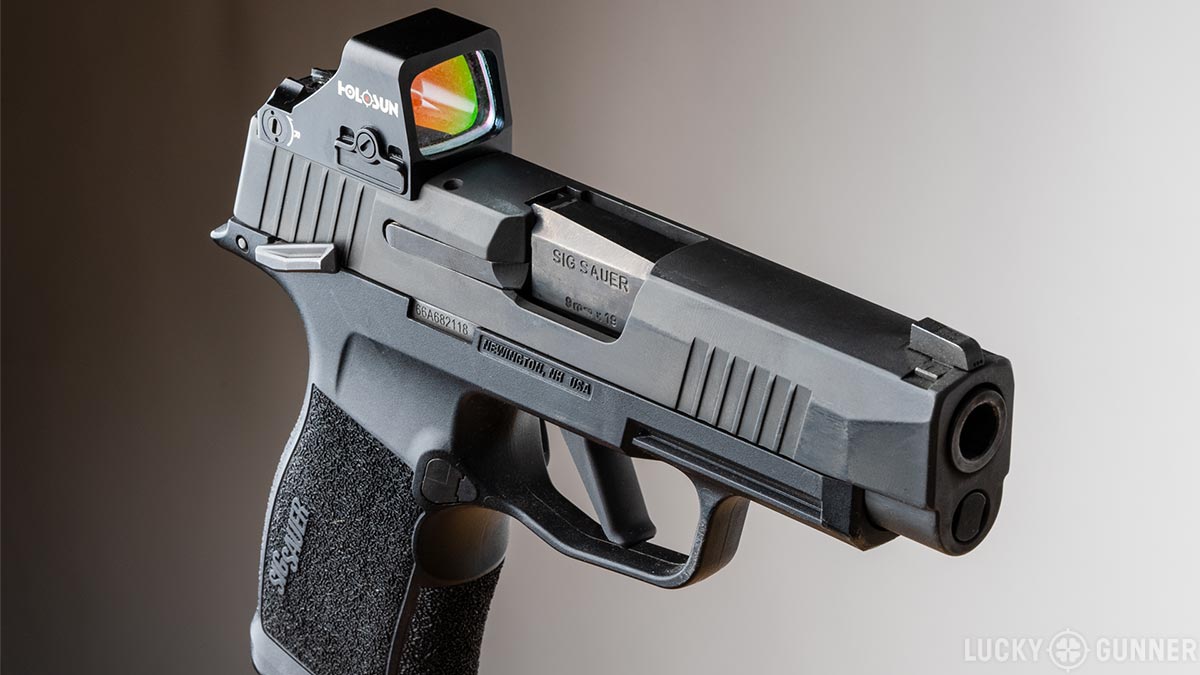 Then a few weeks ago, I went to a class called Cognitive Pistol and Tactical Anatomy taught by John Hearne. Excellent class. I’ll have some details from that trip in a future video. This class involved a lot of shooting at small target areas. I noticed pretty early on that my shots were hitting a few inches low. At first, I just figured the optic maybe had a little more offset than I remembered. So I started compensating for that, but I was still getting a lot of shots lower than I would have expected.

Usually, this just means bad trigger control on my part. But when I have bad trigger control, I tend to get some left and right deviation as well. During the class, most of my low shots were right down the middle. Aiming a little high got me through most of the class okay.

At the very end, we did an exercise with a steel spinner target. I could not hit that thing to save my life. But I was still halfway between thinking I had a hardware issue and thinking I just forgot how to shoot. Most optic problems turn out to actually be shooter problems, so I was reluctant to blame the equipment.

When there is a legitimate problem with an optic, nine times out of ten, it’s related to the interface between the optic and the gun. Either the mounting hardware has an issue, or there are loose screws or something like that. After class, I checked my optic screws. They were still nice and snug. The optic wasn’t moving or rattling. So I had plenty of time on my drive home to ponder how I had become such an incompetent pistol shooter.

The next day, I went out to the range to see if I could figure out what was going on. Here’s a five-shot group at five yards. 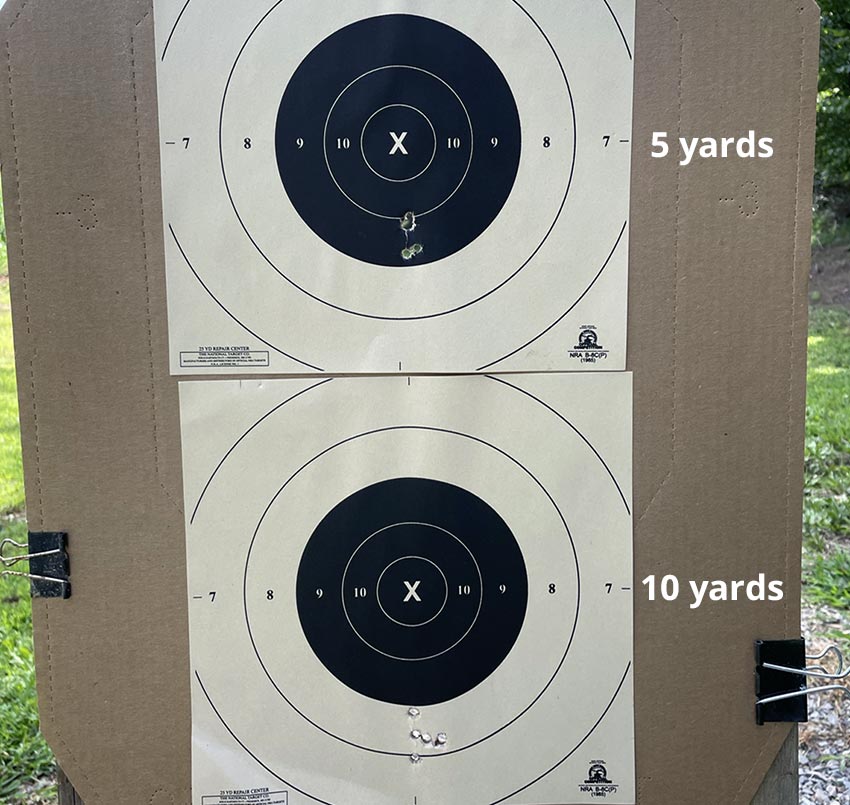 With a properly zeroed pistol optic, you will have some offset at close range, but that’s a little more than what’s ideal. That offset should have disappeared by the time I moved to about 15 yards, which is the distance I had last zeroed the gun. But here’s a five-shot group at 10 yards and it’s even lower than the five yard group. At 15 yards, my group was not only low, one of the rounds was off the target completely. 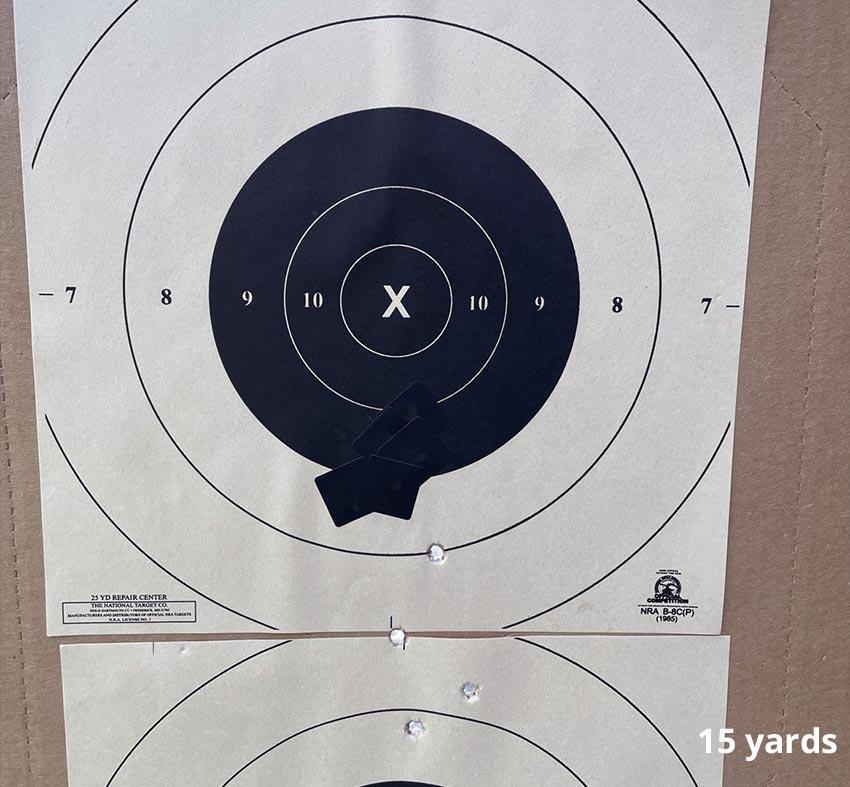 That was odd. So I cranked the elevation adjustment up several clicks. Shot another group at 15 with this nice cluster in the X and one guy way down here in the 8-ring. I was shooting these all from the bench, so I knew for sure it wasn’t me this time. Something was definitely up. 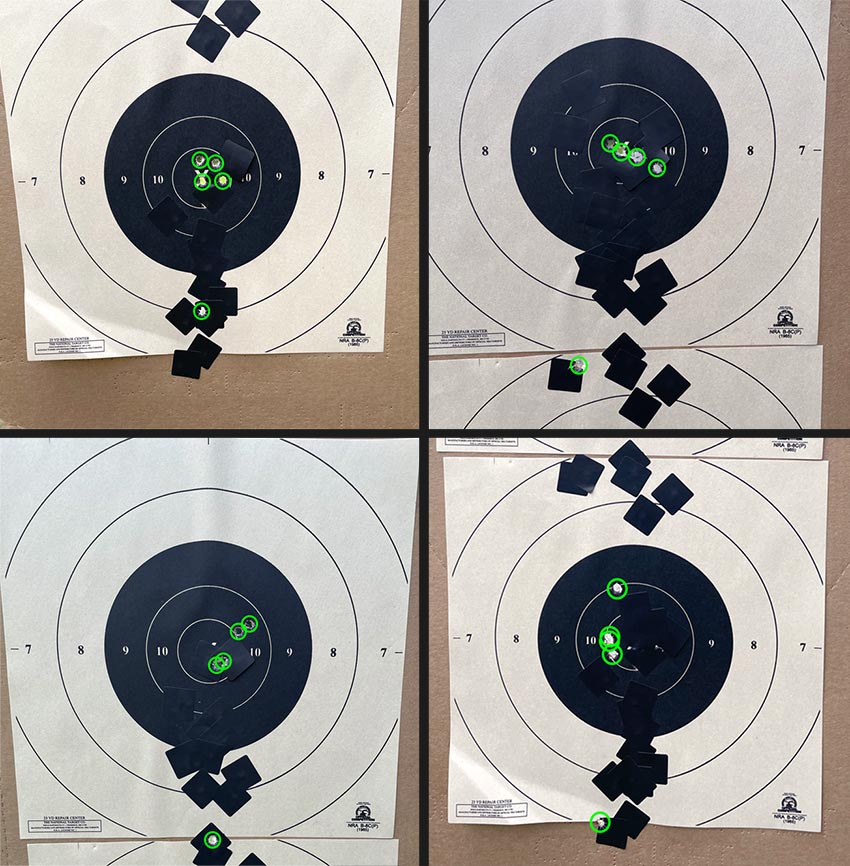 I shot several more groups and every time it was the same story. The first shot would be six or more inches low, and the rest would be grouped pretty close to the point of aim. I tried switching ammo. I tried a few rounds of HST, which I know this gun has grouped well with in the past. Same thing.

I would not have shot so many groups, but the fact that I was consistently getting just one low shot out of every five rounds was really perplexing. And I’m still not quite sure why that was the case. This is the first time I’ve had an optic behave like that. I was beginning to wonder if there was something wrong with the gun itself and not the optic.

I checked my optic screws one more time and I snaked the barrel a couple of times. Tried a few more rounds and got this train wreck. This is a lot more erratic than before, and it’s more like what I would expect from a malfunctioning optic. 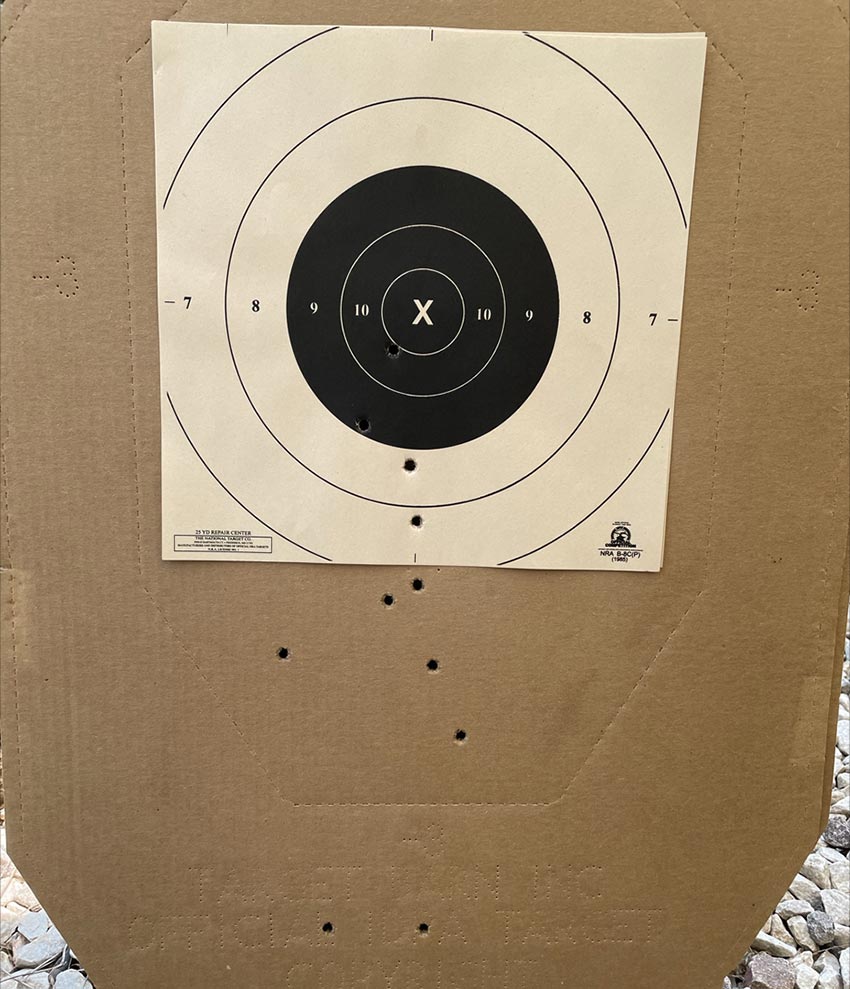 But I still wasn’t sure if the problem was the optic itself or the way the optic was mounted. Maybe it was moving around on the slide and I just couldn’t tell. So I removed the optic and put the original iron sights back on the gun. It grouped fine at 15. I took the Holosun and mounted it to the Sig P322 that I reviewed a few weeks ago. That gun had some reliability issues, but it was very accurate. And the slide is cut for the same optic footprint as the P365, so it made a good test platform.

Six rounds of .22 told me everything I needed to know. Crazy vertical stringing. 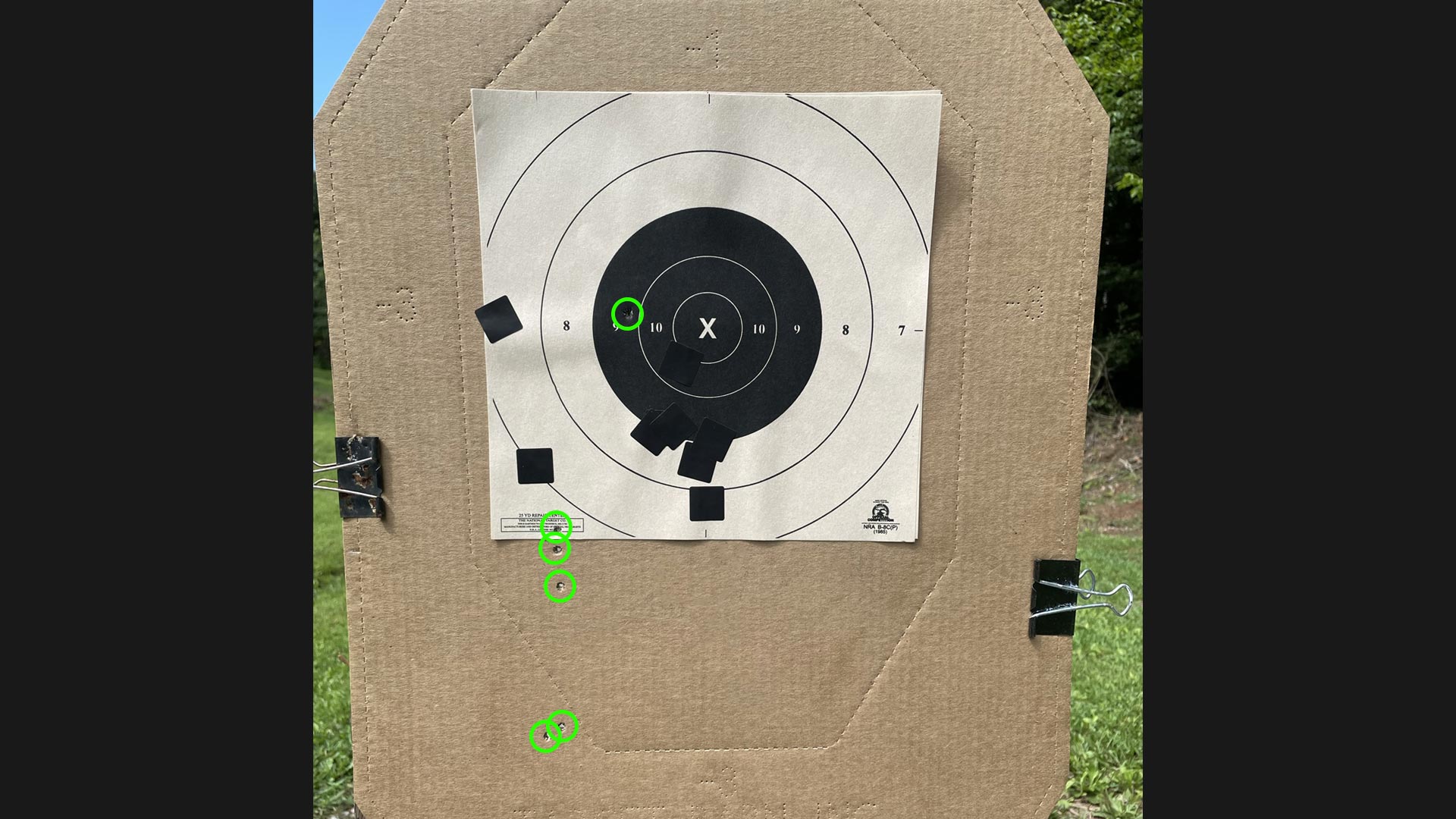 Without the recoil of the 9mm, I could actually see the dot moving in the window. After every shot, it would jump to a different spot relative to the iron sights. Apparently, whatever is supposed to hold the emitter in place on the vertical axis inside the optic is not doing its job, so the dot is just moving up and down freely.

I filled out the warranty form on Holosun’s website last Friday. On Monday, they sent me a shipping label and by the time you watch this, the optic will be on its way back and hopefully will be repaired or replaced.

My purpose here is not to drag Holosun’s name through the mud. We have six or seven of their optics here and this is the first time we’ve run into an issue. I have no reason to believe this is a common problem. I plan to keep using Holosun optics for the time being. There are a couple of things we can learn here that are not specific to this optic.

The first one is that sometimes optics fail in unexpected ways. The number one concern people tend to have with pistol optics is that the electronics will fail and the dot will just not be there when they draw the gun. Based on the popularity of optic torture tests, the second most common concern seems to be that the gun will somehow fall ten feet and land optic-first onto pavement. So everybody wants a super rugged optic with long battery life. Okay, I get that. Those are good features.

But an optic spontaneously losing zero? That’s not a problem I hear people talk about too often. In this case, I was still able to get hits, even with the failing optic. They weren’t as good as the hits I wanted to get, but they were acceptable. The optic would not have gotten me killed in the street this time. If the windage adjustment had been wandering rather than the elevation, I might have had a much bigger problem.

Again, I’m sure the iron sight guys are enjoying some schadenfreude right now. So I have to remind everyone that iron sights fail, too. I’ve had front sights launch themselves off of guns more than once, and I’ve lost count of the number of times I’ve had a rear sight wander around in the dovetail. However, I will say that when there’s a problem with iron sights, it’s usually evident pretty quickly. You can look at a rear sight and tell if it’s way off center. I had no way of knowing this optic was failing except seeing where my shots were going and there are a lot of other variables that can cause the point of impact to be off besides a failing optic.

So another good lesson to learn from this is that backup iron sights are very good to have. To mount an optic on the P365 XL, you have to remove the rear sight. That leaves you with just a front sight, which really doesn’t help much. That’s one of the biggest disadvantages of this model. 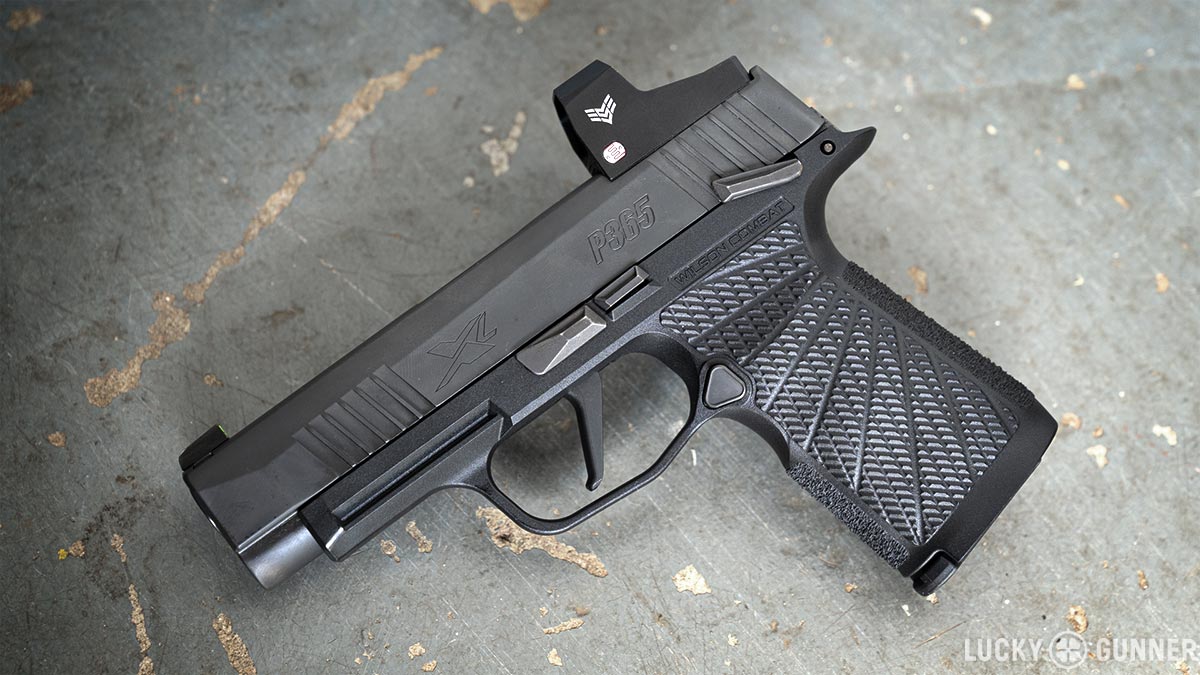 Some of the newer Sig models are not set up this way. This is a new P365 in .380. This one came with the optic. You can see that it’s a little farther forward on the slide so there’s room for a rear sight behind it. And this version has sights that are tall enough to see through the optic window. That’s an ideal setup. 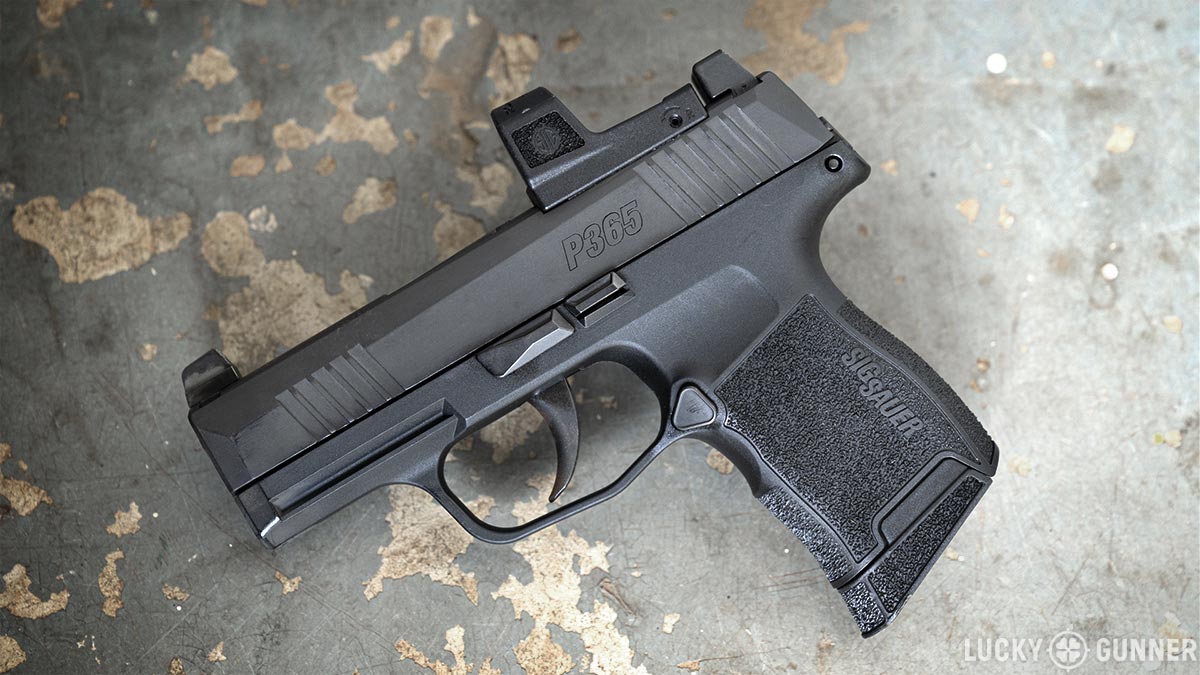 If I had had a setup like that on the XL, I could have figured out that I was having an optic issue at the beginning of that class instead of the next day on the range.

We tend to think of backup sights as an emergency failsafe in case the optic shuts off unexpectedly. They could also be useful for diagnosing other problems with the optic.

Okay guys, that’s all I’ve got for now. I hope you found some of that helpful. If not, here’s another tip for you: never eat yellow snow. But do buy some ammo from us with lightning fast shipping at LuckyGunner.com.

After our disappointing range time with the Sig P322, we decided to try out one of its more humble competitors...