Buying a concealed carry pistol is a very personal, often confusing decision. What caliber to use, how to carry it, whether to choose a semi-automatic handgun or a revolver. Personally, the smallest caliber I feel comfortable carrying is .380ACP, but I’ll take 9mm parabellum over that any day. The problem with 9mm handguns is they often tend to be too large for my favorite method of concealment: pocket carry.

Carrying a diminutive wheel gun is nearly effortless thanks to its lightweight, slim-profile design. Though doing so brought about its own unique set of challenges. Reloading a revolver is slower for most people than replacing an empty magazine with a full one. Additionally, the long, heavy trigger pull on double action revolvers combined with their lack of grip real estate means the normally mild .38 rounds become very punishing. 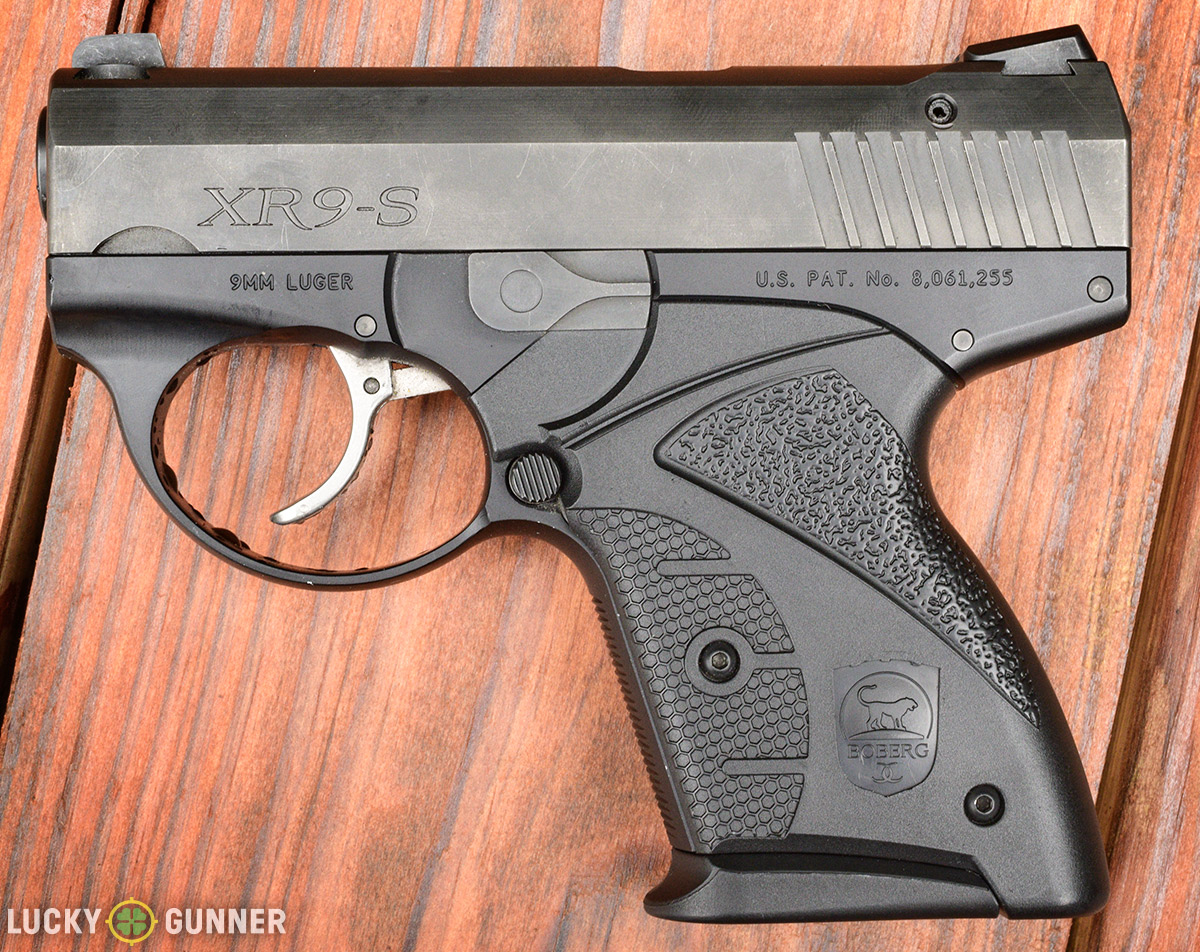 Back in 2012, after scouring the internet for months for a suitable 9mm pocket pistol, I was about to give up until I laid eyes on the most futuristic gun I’d ever seen: the Boberg Arms XR9-S.

The XR9-S is a rotating barrel, locked-breech semi-automatic pistol chambered in 9x19mm. Feeding from a detachable seven-round magazine, the Boberg sets itself apart from other pocket pistols not simply due to its impressively minuscule size, but also its strange operating method and magazine construction. 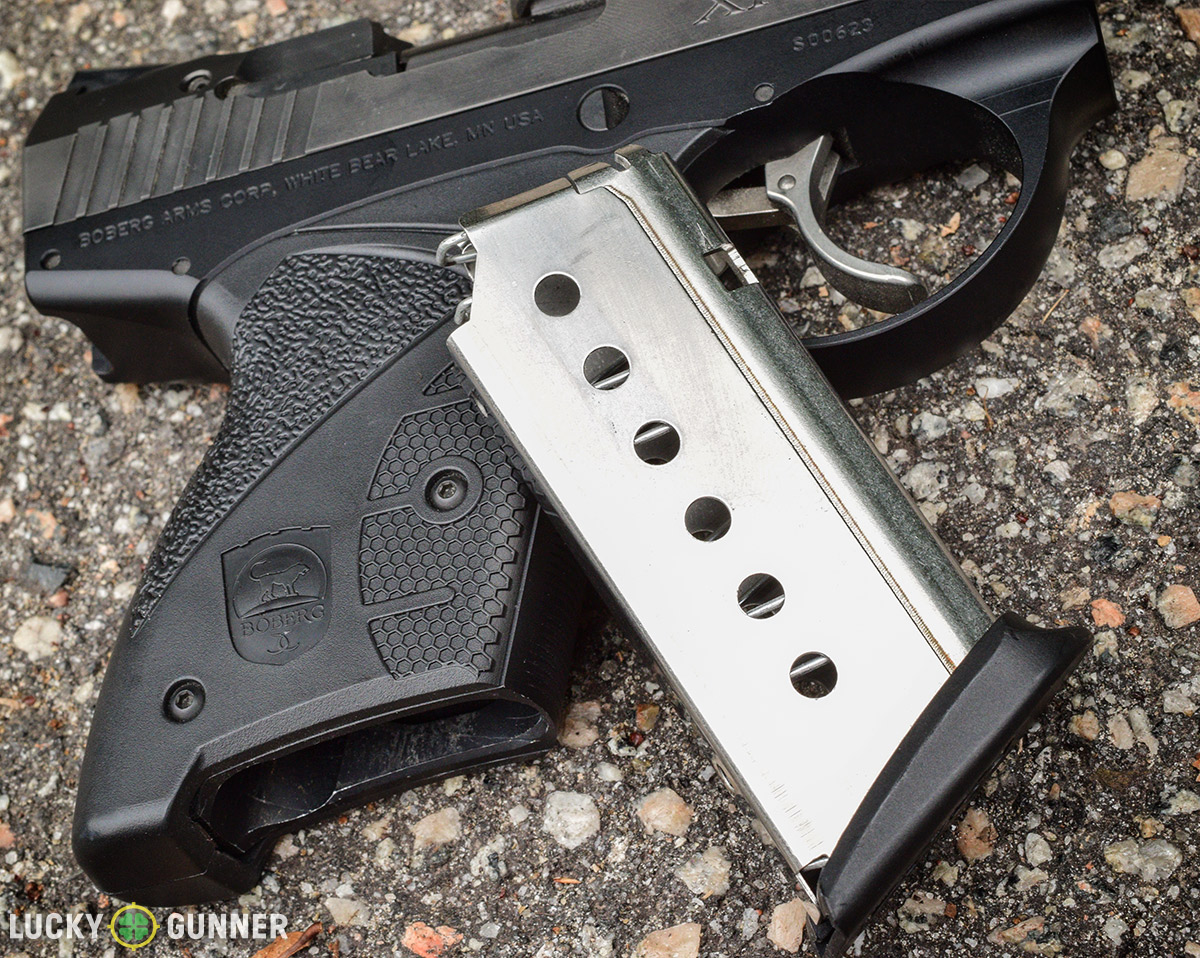 The XR9-S uses a relatively uncommon locking system — so what? What’s impressive is that this system, coupled with the reverse-feeding magazines, result in what could be considered a pistol version of the bullpup rifle. This is because the chamber is directly above the magazine well, not in front of it. It’s a confusing concept to wrap your brain around without seeing it first hand, but basically the top round of the magazine is stripped during the rearward movement of the slide instead of when the slide returns forward. The cartridge rides up a feed ramp elevator until it reaches the same height as the bore. It then snaps into the extractor and is pushed into the chamber where it locks.

Why go to so much trouble?

By having the gun in this configuration, the pistol is smaller than a snub-nosed J-frame revolver, yet has a longer barrel and larger ammunition capacity. The model I personally purchased is the Onyx, or all black pistol. I pre-purchased mine a few years back before Boberg was able to bring the pistols into full production. In exchange for being an early adopter, Boberg offered the XR9-S at a 30 percent discount.

Having owned, carried and shot the pistol for nearly three years now, I have a different perspective than most reviewers. The novelty of the action has long since worn off, and the shortcomings have become apparent. 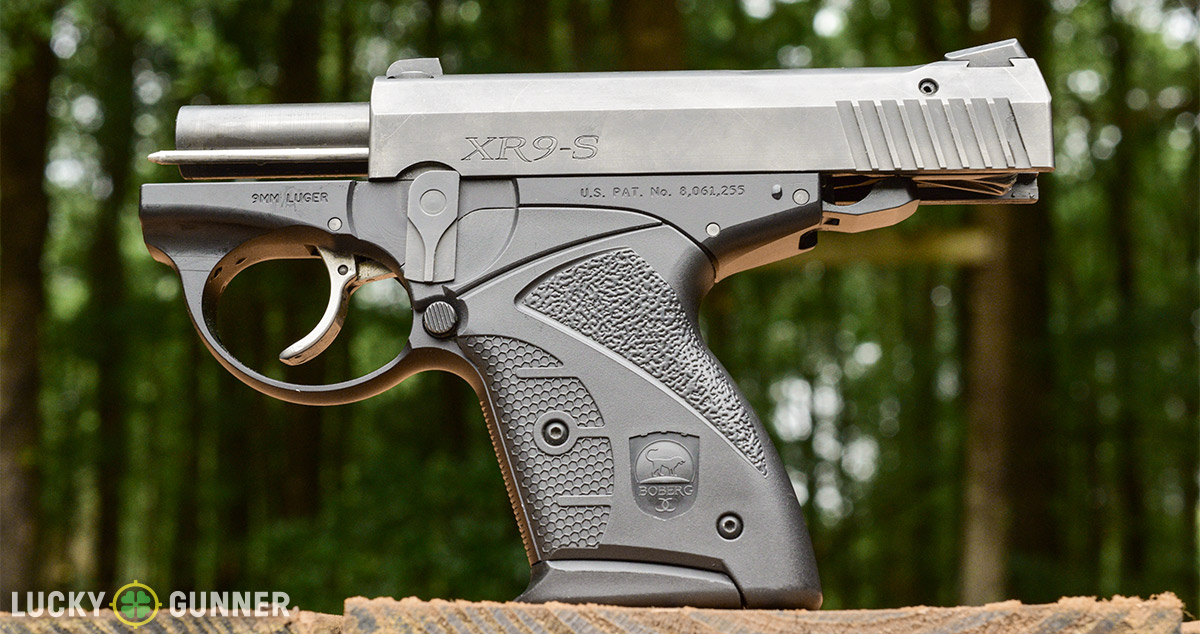 I’ll start out by saying that aside from a Derringer, the Boberg pistol is the most discreet concealed carry firearm I’ve ever had the pleasure of using. It virtually vanishes in khaki pockets and loose-fitting jeans. It’s also surprisingly pleasant to shoot, unlike most sub-compact pistols (I’ll looking at you, Scandium .38 snub). 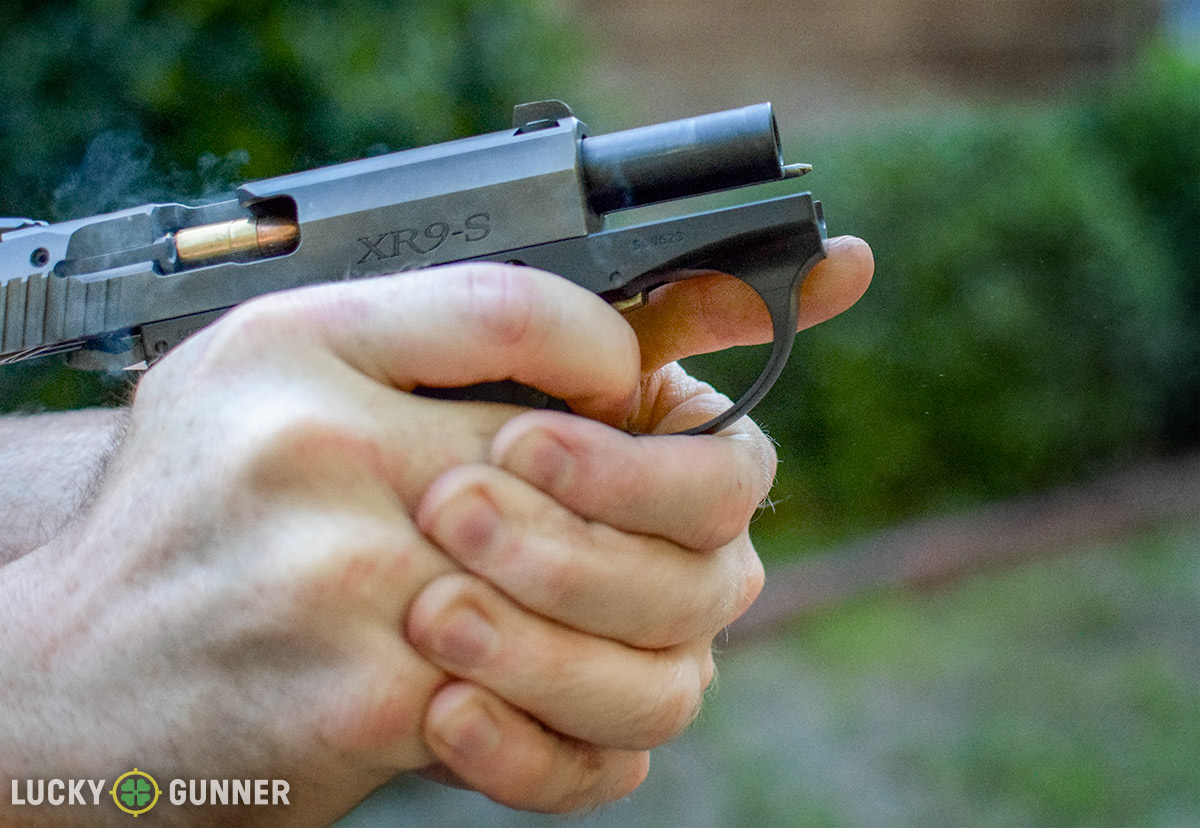 The low bore height and nearly four-inch barrel, soak up most of the felt recoil. This is due to the fact that it reduces the recoil’s mechanical advantage over the shooter’s wrist. Basically, the difference between grabbing a pry bar from the very end and choking up as far as possible.  The position of the bore on the XR9-S mitigates the effects of recoil so much that it almost feels like a stout .22lr or .25ACP, making follow up shots much easier and faster than with similarly-sized automatic pistols or revolvers in combat calibers. On top of that, there’s still the speed advantage of reloading a magazine as opposed to messing with speed strips or loaders for a wheel gun. However, reloading is one of the areas of concern for me. 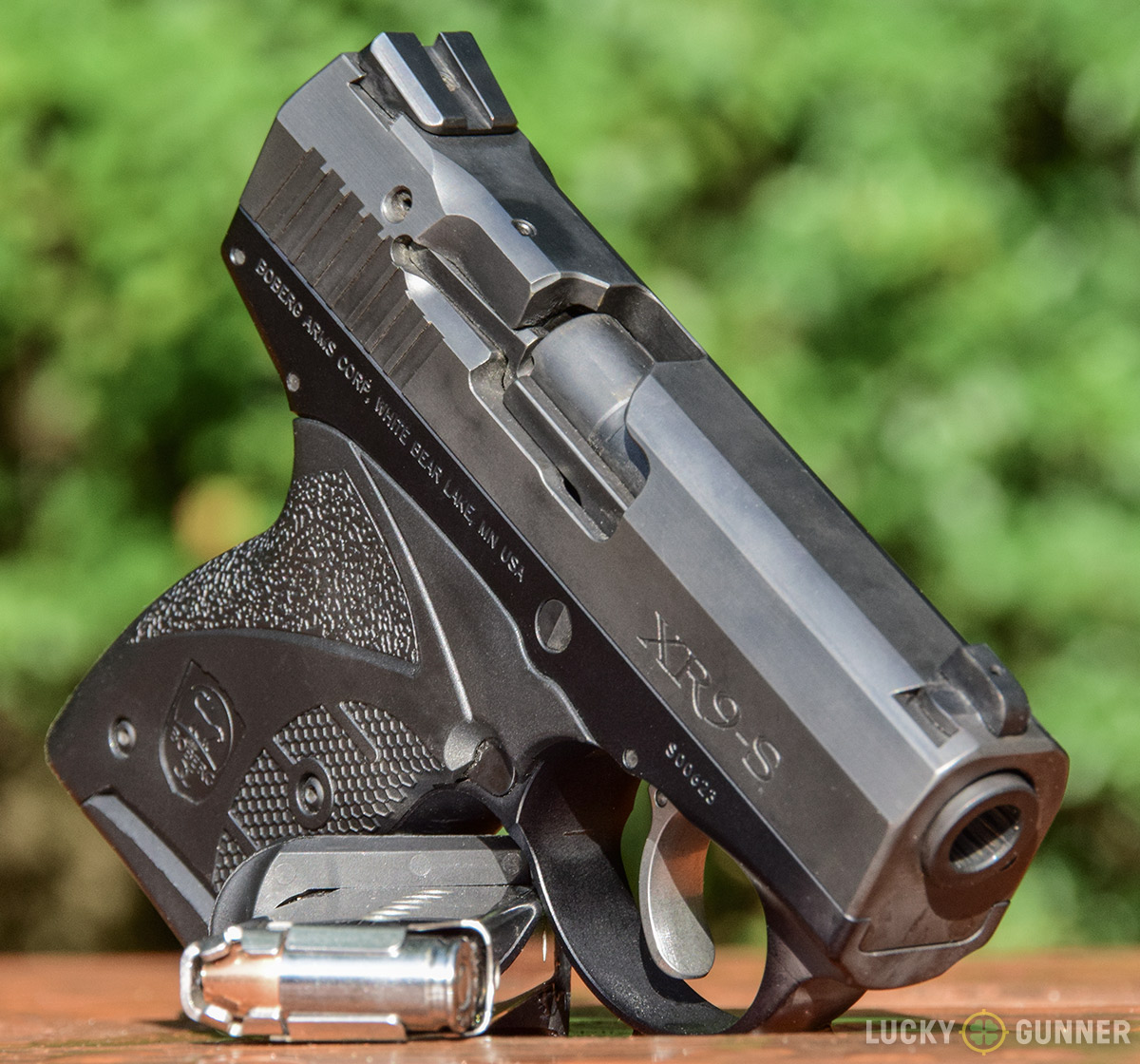 The XR9-S loading cycle is more complex than traditional pistols. Consequently, it has more opportunities to fail, and fail it does. If a shooter doesn’t fully pull back the slide on their XR9, it will jam the round into rear face of the chamber wall (where the feed ramp would be on traditional handguns). When this happens, the action locks up so tightly that even seasoned shooters have issues clearing the malfunction — not because it’s mechanically complicated, but because often the action will begin locking and seize up, requiring significantly greater force to rack again. Not a big deal while at the range with dry hands, but during a firefight while drenched in sweat or rain, this could get a shooter killed.

In my experience the answer is “probably not”. I say this because without solid muscle memory, a shooter will unintentionally lock up the action when attempting to rack the slide on a fresh magazine. This is doubly true if the gun is dirty. Hell, I’ve fired over 1000 rounds and performed hundreds of reloads on this gun, and it still happens to me on occasion. These two factors prevent me from recommending the Boberg to any shooter looking for a new carry gun.

That said, every malfunction I encountered was technically user-induced. The pistol never malfunctioned when firing or cycling its action to strip another round from the magazine. It also could very well be that my older version of the XR9-S has some hiccups that have been worked out in newer models. 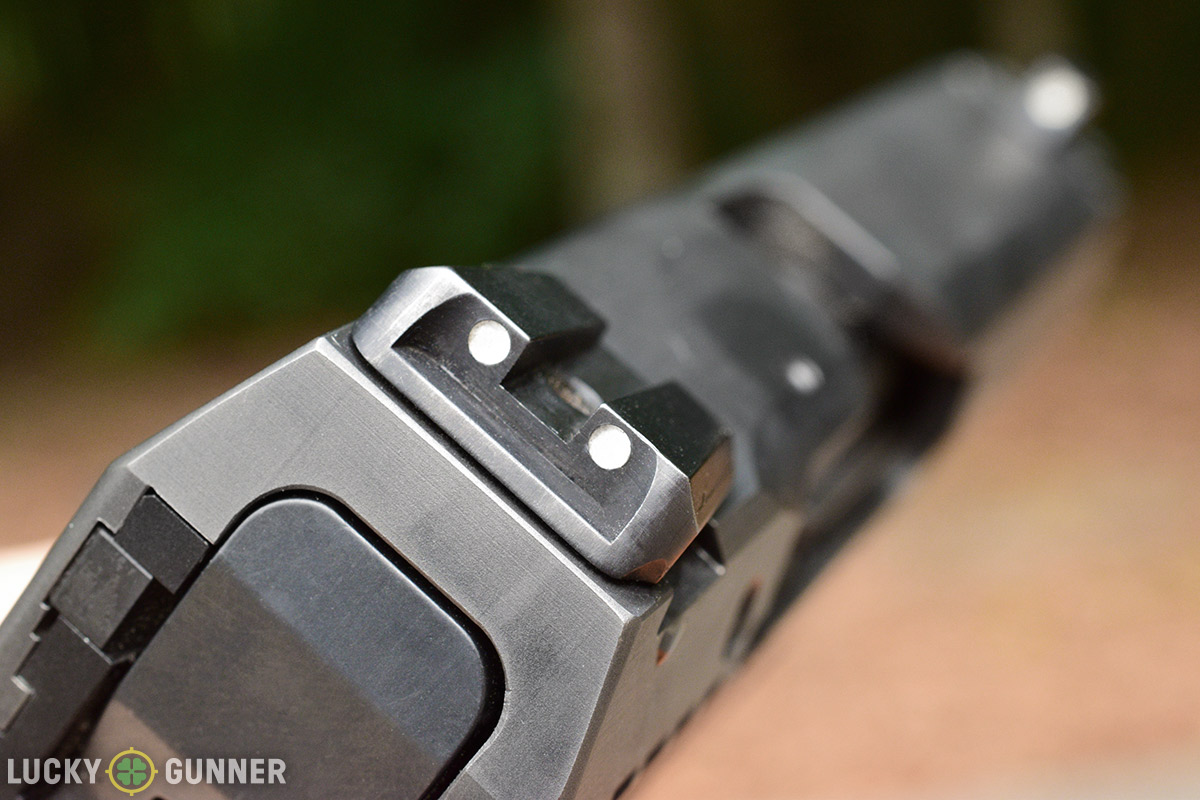 After reaching out to Boberg, they informed me that I am incorrect. They purported that gun is one of the easiest in the world to rack, being a favorite among those lacking upper body strength. Maybe they’re right. Perhaps I need to hit the gym more often, but I find it strange that, having fired well over a hundred different handgun models in the past, the XR9-S is the only pistol I’ve ever experienced this issue with.

In their defense, Boberg did offer to replace magazine springs and recommended I apply anti-seizing compound to the breech block. Being that my handgun is a very early model, it could be that it’s simply a lemon. I’d be happy to re-evaluate the pistol if Boberg would like to either repair or update my pistol. Until then, I wouldn’t recommend this pistol to shooters when the market is so saturated with other quality designs not suffering from these issues.