In the endless debate over which type of firearm is the “best” for personal protection inside the home, you’ll often hear a quick bullet-point in favor of semi-auto rifles and carbines along the lines of “rifles are easier to fire accurately.” It’s just one of many points in favor of semi-automatic rifles that can be compared against the many favorable attributes of handguns and shotguns. Any of them can be very effective self-defense tools, especially if the user is trained and competent. That said, I believe the “rifles are easier” argument should carry a lot more weight than it’s usually given. 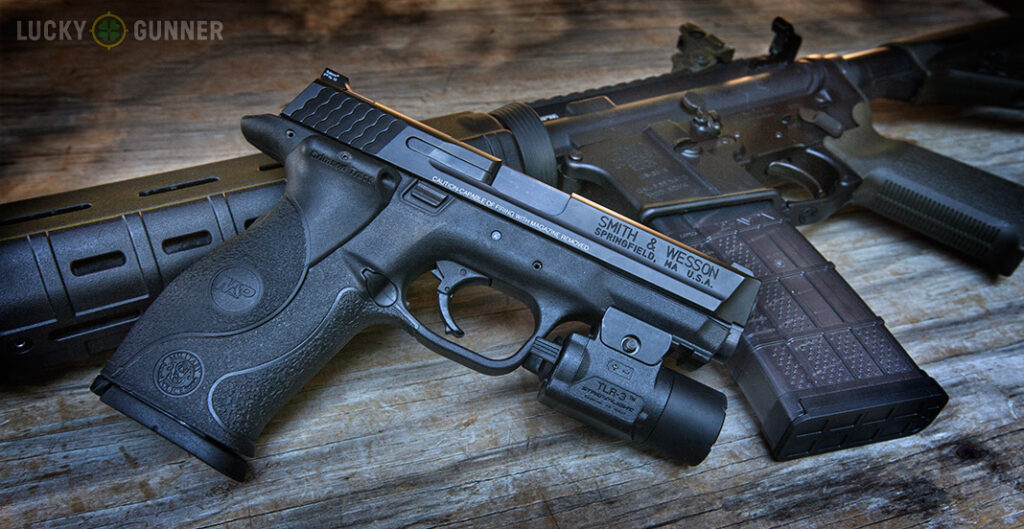 For the vast majority of shooters in the country, rifles and carbines are thought of as long-range slow fire tools, and practicing rapid fire at conversational distances is typically reserved for pistols, or maybe the occasional shotgun. You can see this bias in action at most shooting ranges. Handgun shooters keep their targets inside 25 yards, and the rifle range has targets usually no closer than 50 or 100 yards. But surprisingly few shooters ever try firing their AR-15s and other semi-auto rifles at the shorter distances found inside their homes — usually under 20 yards. If you’re among those shooters, well… spoiler alert: it’s really easy.

Unfortunately, most everyone seems to have already formed a die-hard opinion on the whole “rifle versus shotgun versus handgun” debate, and that means there’s little room left to share yet another set of observations. So rather than simply state my personal take on the issue, I’m opening up the floor for  your 100% real questions so I can address your inquiries and/or skepticism on an individual basis.

Q: Yes, I have a question. When you say “easy,” what do you mean? Rifles are easier in what way?

Q: What kind of rifles are you talking about? Any kind? Cause I have a .500 Laudenboomer rifle and it’s actually pretty difficult to —

A: Yes, another great question! I should clarify. Really, I’m referring to lightweight semi-automatic carbines with shorter barrels chambered in intermediate rifles cartridges or pistol cartridges. The prime example is the typical 16-inch barreled AR-15 and similar carbines chambered in 5.56/.223, but as far as ease of use, plenty of other carbines fit the bill like most AK-pattern rifles and semi-auto pistol caliber carbines.

Q: Okay, that sounds good, but how much “easier” are we talking here? I like to practice with my handguns because that’s what I carry. I don’t have enough time to train with my AR, too.

A: I know what you mean. Most of my serious training time is spent with handguns, too, and with good reason — it takes dedication and consistent practice to keep up proficiency with a handgun. I will become significantly slower and less accurate with a pistol if I go a couple of months without practicing. But with carbines, once I established a “baseline” competency, I have found that my skill degradation is much slower. In fact, I rarely do any serious training with my carbines, but I can still out-shoot myself with a handgun.

Q: Woah, woah, woah… you shoot yourself with a handgun?

A: Ehh… no. What I mean is that I always perform better with a carbine than I do with a handgun in any kind of objective measurement. Even when I’ve been getting in a lot of practice with a handgun and I’m at my personal best, I can shoot the same drills with a red-dot equipped AR-15 in about 30% less time.

Q: Oh, well yeah — with a red dot. That’s not exactly an apples to apples comparison if you’re using an iron sighted pistol. I bet you’d be faster with a red dot on your handgun.

A: I haven’t tried a comparison with a reflex sight on my pistol, but I have tried it with a laser, and I was still faster and more accurate with the AR. To further prove this point, I recently timed myself running three different drills using a full size S&W M&P 9mm handgun, and then shot the same drills with an iron-sighted Beretta CX4; a 9mm pistol caliber carbine. For the record, I hate the iron sights on this carbine. They’re way too low, and the rear aperture is not large enough for up-close shooting. If I were to shoot worse times than my handgun with any carbines, it would be this one.

A: And despite cursing the sights on the CX4 the whole time, I was better with the carbine. Multi-target drills that took 11 seconds with the the pistol took only 9 seconds with the carbine, and shot grouping was much tighter. Owing to the sub-optimal sights, target acquisition was a little slower with the carbine, but the speed at which I could make follow-up shots more than made up for it. The iron sights on the CX4 are not illuminated, so I still wouldn’t want to use it for home defense without adding a laser or red dot (and a flashlight, of course), but with comparable aiming solutions, the carbine is just flat out better for throwing lead at bad guys. 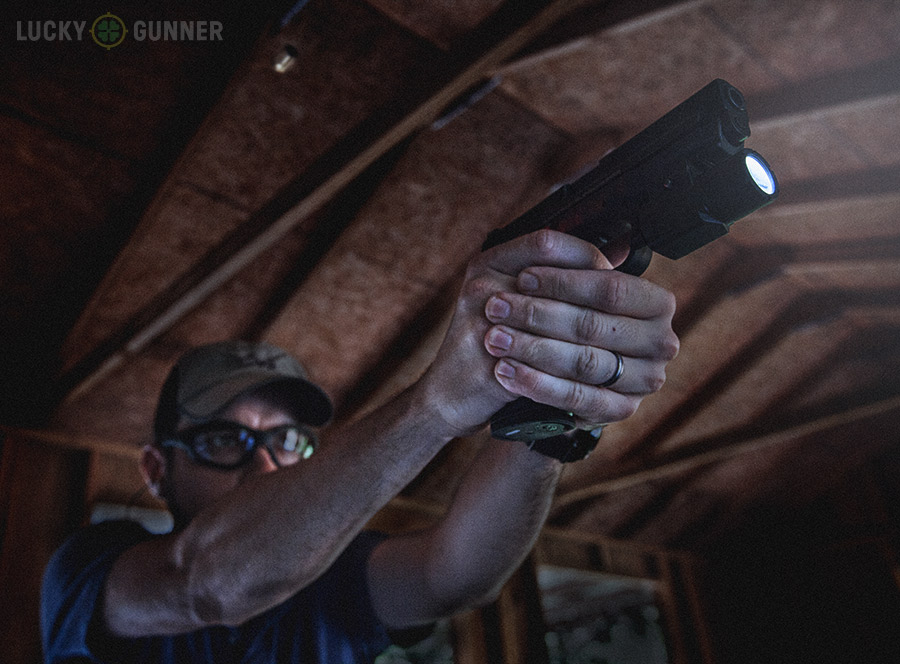 Q: So what you’re saying is — if I get an AR-15 for home defense, I never have to practice?

A: You must be new here.

A: I’m Chris. Nice meeting you, too. No, ARs are not magic and you really should still practice. The key phrase I mentioned above is “once I established a baseline competency…”. You should spend enough time handling and shooting your carbine that things like loading and unloading or clearing malfunctions all become second nature. Put some ammo through the gun, shoot some drills, and know what your capabilities and limitations are. After you have that down, you will probably find that your ability with a handgun will never match your ability with the carbine, even if you rarely practice with the carbine. Of course, it’s possible that a person could completely suck with both, and that will only get better with practice. But barring that, for most people the carbine will provide a better chance of sucking slightly less.

Q: Carbines might be easier to shoot, but a handgun is an easier tool to manage during an emergency. Pistols don’t require both hands to fire, so you can use your off hand to open doors, dial a phone, or assist family members.

A: That’s not really a question, but those are some thoughtful observations. The reasons you mentioned are why many self-defense instructors are adamant about adding a sling to your carbine. A good “tactical” style sling allows you to don the carbine in only a second, securing it right in front of your body where it’s easily accessible. Then you’ll have both hands free, if needed, instead of just the one free hand you’re allowed with the pistol (unless you take the time to put on a holster and belt). When it comes to firing, you might find that a lightweight carbine like an AR-15 is not any more difficult to use one-handed than a handgun, at least at close ranges.

Q: These points all sound great if you’re comparing carbines to handguns. What about shotguns? They’re also easier to aim and shoot than handguns, and they’re more powerful than rifles at close range.

A: That’s true, but shotguns are more difficult to use than carbines in other ways. The recoil is far greater on a shotgun, and it takes a lot of experience to overcome that and get multiple hits on target in a short time span (contrary to popular belief, it’s very possible to miss your target with a shotgun, and assailants don’t always immediately go down after catching a single helping of buckshot). Furthermore, most shotguns used for home-defense are pump action. They can be extremely effective, but working the action under stress is far more difficult than most people realize. A semi-auto rifle is a lot more user-friendly in this regard.

Q: What about semi-auto shotguns?

A: If you can find one that’s not too picky about ammo and will run reliably, it might be a good choice. There’s still the recoil issue to deal with, and it’ll have a fraction of the ammo capacity of a carbine equipped with 20 or 30-round magazines.

A: Yes, shotguns are scary and make big holes. They certainly have some advantages over carbines. But for now, I’m really just addressing the fact that carbines are easier to use. For most people, a carbine is going to be the tool that will consistently allow them to get the greatest number of hits on target in the least amount of time. Whether that’s worth the other trade-offs is something each person will have to decide.

Okay, that’s all the time we have for our Q&A. I feel like this was productive… we should do it again sometime! Just remember, you will always “fall to the level of your training”, so don’t view your choice of home defense tool as both the beginning and end of your preparation. But it is an important choice to make, and hopefully this totally legitimate two-way Q&A session will give you a couple of things to consider.

Back in June, I wrote a post all about my search for the ideal compact 22 pistol that I could...