Shooting Handguns with Both Eyes Open: Do You Really Have To?

Most of us were taught that we should shoot handguns with both eyes open. That’s generally a pretty good idea, but is it an absolute rule? Today, we’re digging into when and why it might actually be beneficial to close the non-dominant eye.

Hey everybody, I’m Chris Baker from LuckyGunner.com. Once upon a time, I was told that you’re supposed to shoot a handgun with both eyes open. So I did, and I don’t really remember having any trouble figuring out how to do that. So when I’m asked how to shoot with both eyes open, I usually refer people to one of the dozens of existing videos and tutorials on that topic.

But what I want to talk about today is whether we really do have to shoot with both eyes open. I think the short answer is “Yes, usually. But maybe not always.” 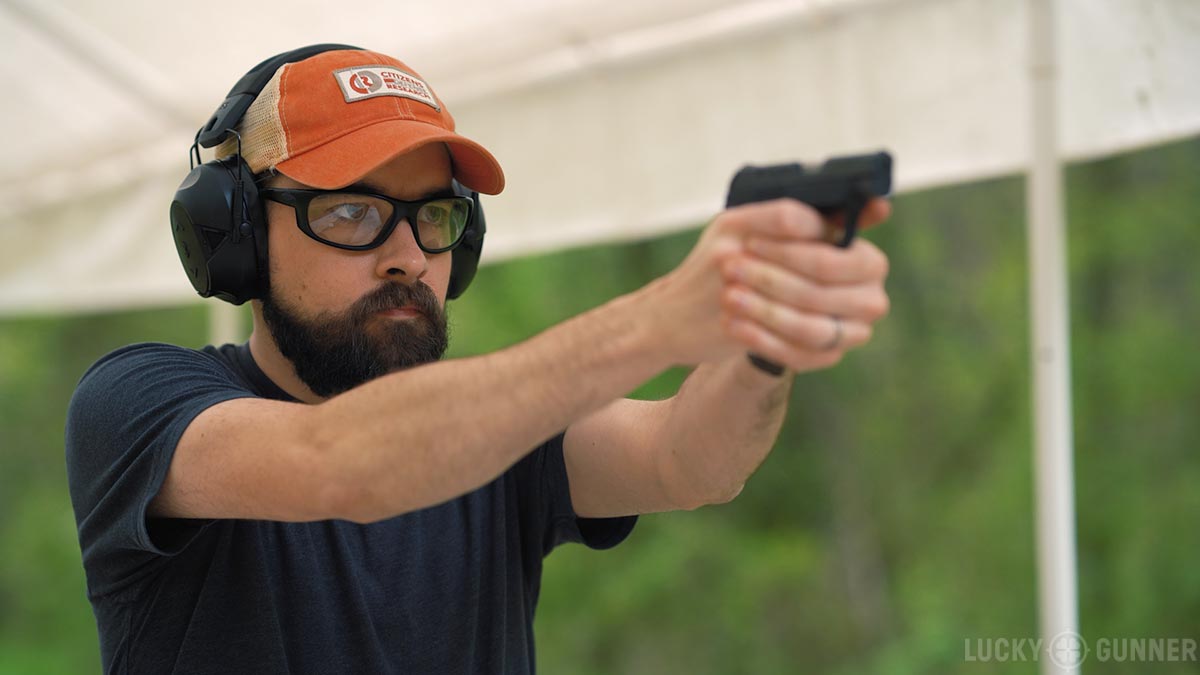 I’m not claiming to have any special expertise in this area, but if there’s anything I’ve learned over the years about eyes and vision as they relate to handgun sights, it’s that we all see a little differently. Each of us have some quirks in the way our eyes function and what our brains do with visual information.

I’m not only talking about the obvious stuff like nearsightedness or cross-eye dominance. We’re also dealing with factors like focus. Some people find it easier than others to shift the focus of their eyes from one plane to another. Peripheral vision varies from person to person. Some people require less time to register visual information — they essentially “see faster.”

So, I tend to be a little skeptical of any absolute rules when it comes to how we should use our sights or what we should do with our eyes when we’re shooting. That includes shooting with both eyes open.

Shooting With Both Eyes Open: Pros and Cons

I can think of plenty of reasons why it’s generally a good idea to shoot with both eyes open. It doesn’t cause muscle strain the way closing one eye does. You can maintain your peripheral vision and depth perception. And generally speaking, whenever we’ve got a gun in our hand, we probably want as much visual information about what’s going on around us as possible.

For some people and in some situations, shooting with both eyes open is easier said than done. Most of us were taught to shoot with our visual focus on the front sight. Assuming both of your eyes are able to focus at that distance, you will typically see one nice, crisp sight picture, and two out of focus targets. We line the sights up with the target that corresponds to our dominant eye and ignore the other target. 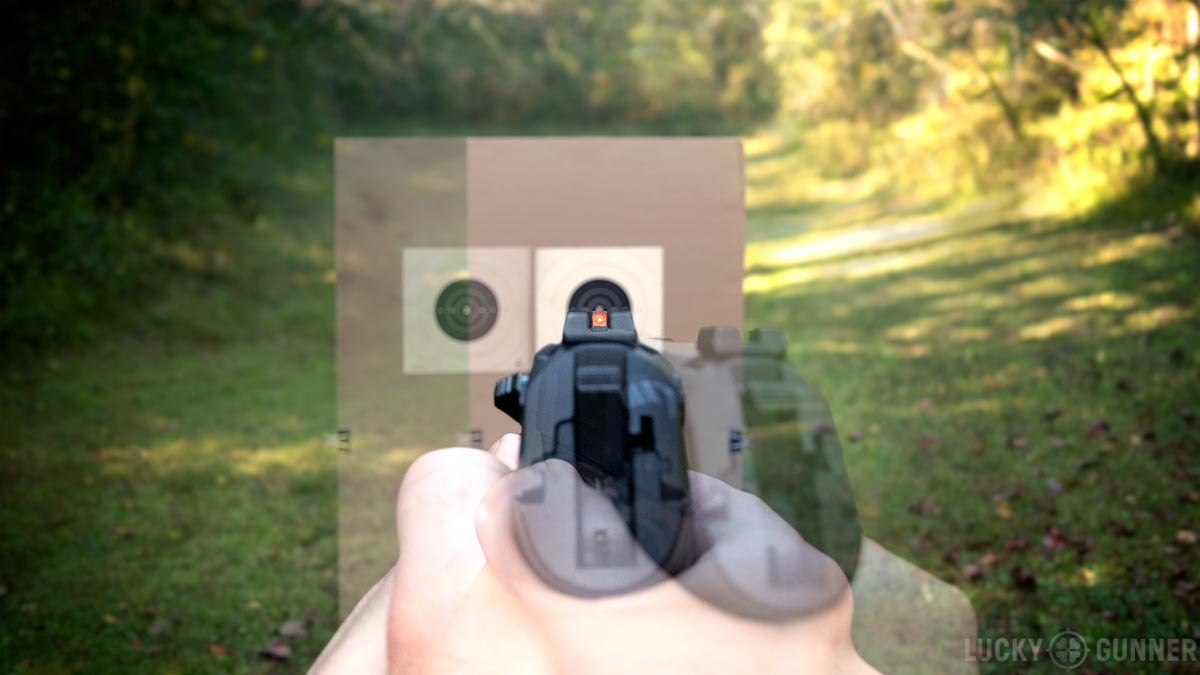 When people ask how to shoot with both eyes open, one of the big challenges they’re trying to figure out is how to ignore that other target. Some people can just do it. If not, there are different ways to train your brain so that eventually, you don’t even really notice the second target.

This tends to work when we have a single stationary target. A lot of shooters, myself included, have found that it doesn’t always work so well with more complex shooting problems. For example, they might find they can no longer block out that irrelevant information from the non-dominant eye when they’ve got a moving target or when they’re transitioning between multiple targets. Some people get a lot of visual confusion from the second rear sight notch they can see with their non-dominant eye.

Personally, I have trouble with multiple targets that are right next to each other, especially if they all look the same. Something like this row of five steel plates creates a lot of visual confusion for me. I see ten plates all mixed together, and my brain can’t filter out the ones I’m seeing with my non-dominant eye. 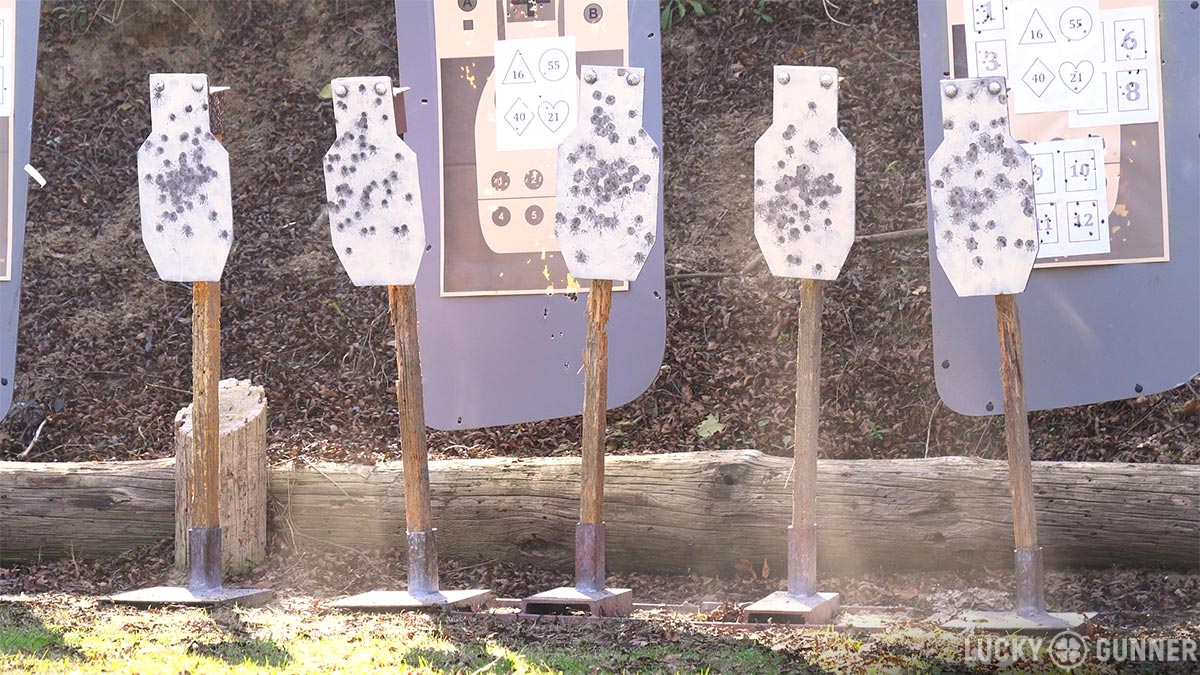 A few years ago, I started get a little frustrated about this issue. I had a hard time describing the problem to anybody else and I was beginning to think I might be the only one who had dealt with it.

Around that time, I shot in the match portion of the 2018 Rangemaster Tactical Conference. It was the final shoot-off where the top 16 shooters pair off and go head to head. Each shooter has three targets and the first one to knock down all three wins a point. Both shooters have to engage the targets from outside to inside with the final two steel poppers right next to each other in the middle.

I didn’t make it past the first round of the shoot-off, partly because whenever I got to the steel poppers, I was seeing four of them and I couldn’t immediately tell which one I was aimed at. It just caused a split second hesitation, but it was a split second too long.

A couple of hours after the match was over, I caught up with Gabe White. Gabe has studied the issue of vision and shooting with iron sights more than anyone I know, so I figured he would have some good advice. He also, coincidentally, won the shoot off that year, which is not surprising because he’s also one of the best pistol shooters I know.

Gabe’s advice was that when I run into a shooting problem like that, just close or squint my non-dominant eye. That’s it. I think I had to ask him to repeat it like three times because I wasn’t sure if he was joking. And then I felt like a complete idiot because it’s the most obvious solution to the problem, but it had never even occurred to me to try that. You have to shoot with both eyes open, right? Well, maybe not all the time.

Since having that conversion with Gabe, I’ve found a lot of situations where closing one eye is beneficial. And usually, I’m not completely closing my eye and it’s not for a very long time. It’s more of a momentary half squint. I just need to block out a little of that excess visual information to see what I need to see.

There are other ways to address the problem of visual confusion. You can shoot with a target focus rather than a front sight focus. That way, you see one target that’s in sharp visual focus and your sights will be a little blurry. I think this might be another one of those things that’s highly individual. Some people have to target focus because of presbyopia or other vision issues. 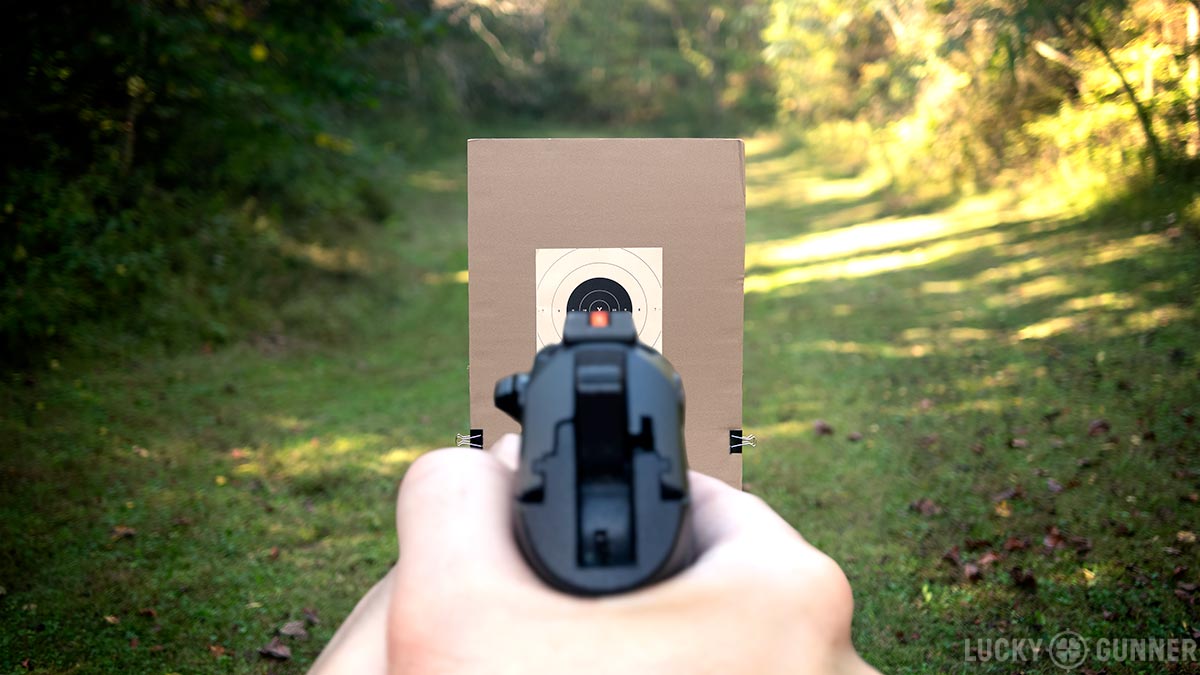 I have a tough time with target focus once the target is beyond about five yards — I just can’t see a clean enough sight picture to hit anything reliably. But if you can get good hits with a target focus, that’s probably the way to go. It has a ton of advantages besides just reducing visual confusion. Some people can pull it off even out to 15 or 20 yards and beyond.

Another way to deal with visual confusion is to re-train your eyes the way Gabe White describes on his website. He’s got a really in-depth article about this on his website. It’s difficult to describe, but basically, Gabe is able to look at the target but focus on the front sight. The point where his eyes converge is the target and he only sees one target. But the target is blurry and he’s got a sharp focus on the front sight.

This is not normally how our eyes work, but some people can train their eyes to do that. Some shooters probably subconsciously learn how to do that without even realizing it. I’ve never been able to figure out that particular trick, and closing one eye is an easy enough alternative for me.

An even easier solution is to get a red dot sight for your pistol. That way you can shoot with a target focus and you don’t sacrifice your sight picture. 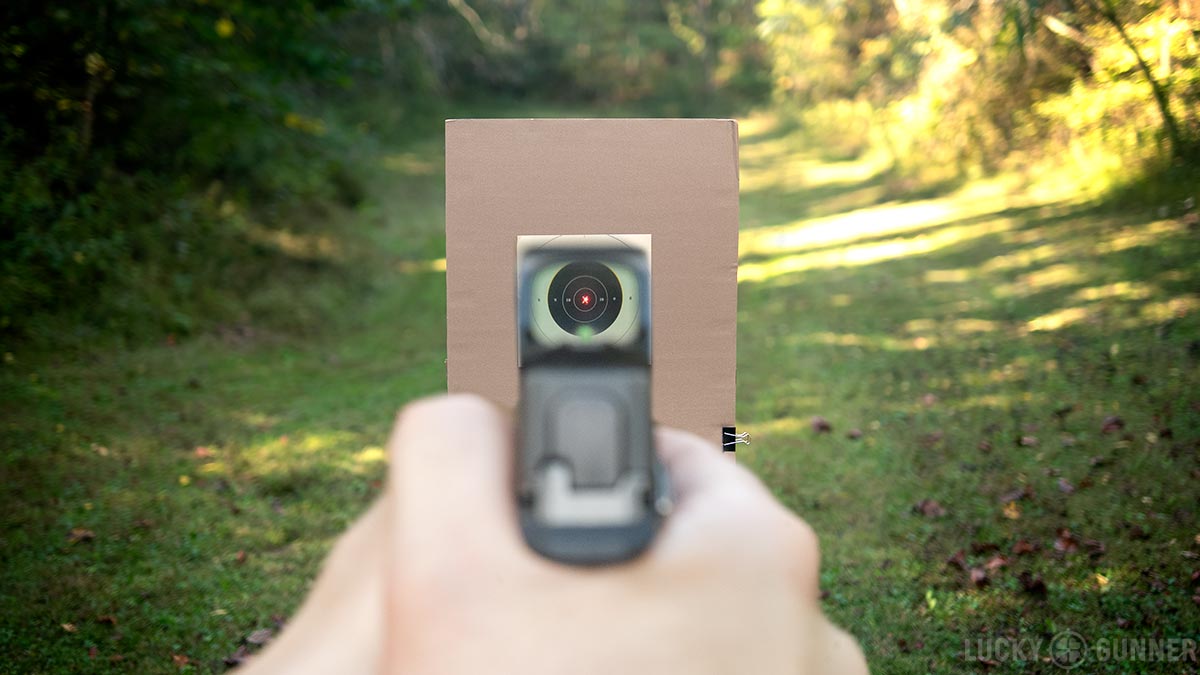 Some shooters who are new to dot sights make the mistake of looking at the dot. You actually want to look through the dot. Focus on the target and just superimpose the dot over that. As long as you don’t have a vision issue like astigmatism, the dot is a far more precise aiming reference than iron sights.

I’ve been shooting pistol optics a lot the last couple of years and I’ve found that even though a dot makes it much easier to keep both eyes open, there are still situations where it’s helpful to slightly close my left eye. But at this point, I don’t even really think about it. I just automatically do my little half squint so I can see what I need to see as the situation requires.

See What You Need To See

Just because shooting with both eyes open is generally better doesn’t mean we have to do it that way all the time. If you need to occasionally close one eye to see better, then do it.

And for those of you who have never had an issue with this, especially if you’re teaching other people how to shoot, just keep in mind that we all have different eyes. What comes naturally to you might be very difficult for someone else. There might be more efficient alternatives to solving the problem than insisting they do it the way you do it.

Okay, that’s all I’ve got for now. I hope you guys found that helpful. Next time you need some ammo, be sure to get it from us with lightning fast shipping at Lucky Gunner.

The cheek pistol is a concept devised by our friend Rhett Neumayer, (a name that should be familiar by...