Do you know what that rail is for on the front of your handgun? Contrary to popular belief, it’s not there to impress the ladies. It’s for mounting accessories, which usually means some kind of “tactical” light. Anyone who carries a handgun or keeps one around the house should also have a good flashlight, and a rail-mounted light is a convenient solution. Handheld flashlights are a popular alternative, and many respected firearms instructors seem to prefer this option. In this week’s Make Up Your Mind Monday, I go over the basic pros and cons and tackle both sides of the the weapon mounted vs. handheld light debate.

No matter which way you lean on this issue, it’s essential that the light selected is of high quality. Even if you skip the practice and training necessary to become proficient with a light, just having ready access to a reliable illumination source is better than waving around your gun in the dark. Below are a few general gear-specific tips and some recommendations to get you started. 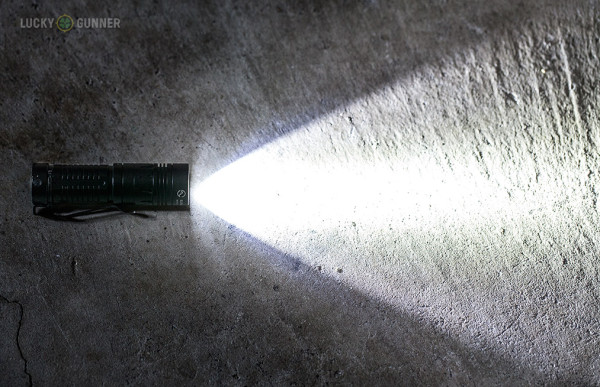 LED technology has come a long way in the last decade and we now have a plethora of remarkable flashlights that put out a great deal of illumination but can still fit in your pocket. However, not every well-constructed bright flashlight is suitable for use with a handgun. Beyond basic quality and light output, the most important feature to look for is a switch that can be activated easily with one hand. This usually means a tailcap switch that is operated with the thumb when the light is held with the grip shown in the image below. 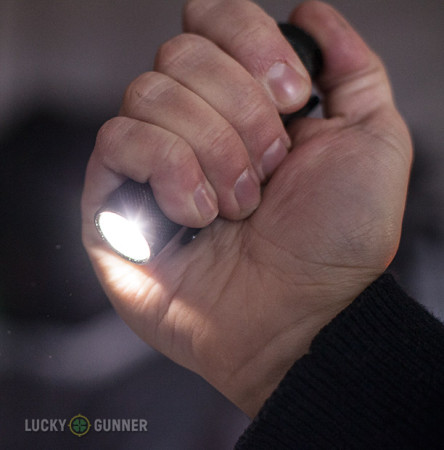 A simple interface is also ideal. Some lights have a strobe function or various brightness modes depending on how many times or how long you press the switch. For self-defense, the light should be stupid-easy to operate so that next to no brain power is required to activate it under stress.

Some lights feature a “momentary-only” style switch, which is useful for techniques that require the user to activate the light only for short bursts in order to avoid becoming a target for a potential attacker. Others boast extraordinary light output, which may be ideal when searching for missing children in the woods at night, but possibly counter-productive when illuminating your bathroom with a glossy white tile floor (more on brightness below). Most tactical flashlights run on one to two batteries, usually AA or CR123. Both battery types are common and affordable, and many of the brighter flashlights will burn through those batteries fairly quickly when used on the highest setting, so keep a good supply handy. No matter the bells and whistles, just make sure your light comes from a reputable manufacturer with a history of making lights that work every time and won’t crap out on you when you need it.

Below are a few excellent tactical flashlights that are both reasonably priced any readily available from several retailers. This is by no means an exhaustive list, and you may find that none of these lights best fit your specific needs, but it should help get you thinking in the right direction. 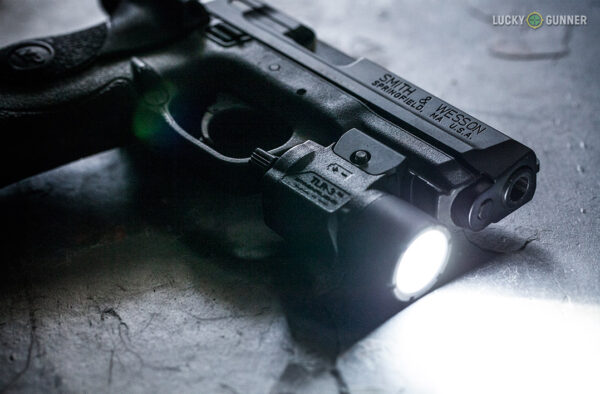 With a few exceptions, lights designed to be mounted to your pistol’s accessory rail cost significantly more than a handheld light of equal quality. Not only do they have to pack a lot of illuminating power into a small package, lights that mount directly to your firearm have to include a switch that is easy to reach. The sensitive electronics must be able to withstand the recoil of a centerfire handgun. The lens material has to endure muzzle blast and fouling without breaking or permanently diminishing the quality of the beam. That’s a lot to ask, and it doesn’t come cheap.

Many weapon mounted lights will function perfectly over the course of a few practice sessions, but only the most rugged lights can withstand the recoil and abuse of being attached to a pistol for several thousand rounds. Consider how often you’ll want to practice with your light mounted to your pistol when making your choice, and assume that if you want maximum durability, it will come with a price tag to match. Even if you decide not to keep your light mounted every time you fire the pistol, at the very least, fire 200 rounds with the light attached to ensure it’s mounted correctly and will not work its way loose under recoil. Also be sure to check that the light and switch still function after firing. Finally, it’s not a bad idea to clean the outside of the light’s lens before storing the gun for emergency use.

Here are a few suggestions to get you started. There are plenty of excellent lights not listed here, but be aware that inexpensive lights typically cannot be expected to stand up to long-term use nearly as well as more costly designs. Remember the old addage, “If it looks too good to be true… it will probably catch on fire when you try to turn it on.” 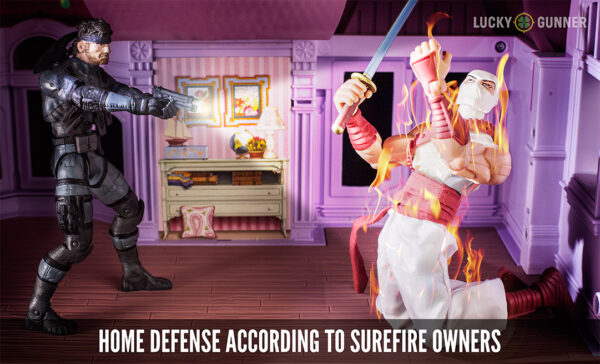 Many flashlight discussions revolve around the issue of brightness. There is a mistaken belief among some folks that a tactical flashlight can be counted on to act as a kind of secondary non-lethal weapon and so brighter is always better. This is nonsense. An extra bright light can be useful — pointing the light in the eyes of a potential threat may be enough to de-escalate a situation and encourage the miscreant to seek his fortune elsewhere. Or it may just provoke him further. In any case, a determined attacker will not be “instantly blinded” by your handheld light, nor will it spoil his ability to pull a trigger.

You can try this out for yourself. Go somewhere dark, have a buddy shine a bright light in your face from 20 feet away and see if you can still rush and tackle him. It will certainly be unpleasant (probably for both of you), and you may end up with a headache, but there’s only a very small chance the light will immediately bring you to your knees in pain, crying “I’m meeeeeltiiiiing!”

Furthermore, a light that’s too bright can have detrimental effects on the user’s own visibility.  If you’ve been in dimly lit surroundings for about half an hour or longer, your eyes have already adjusted to gather as much light as possible. When you’re suddenly exposed to bright light, even if its reflected light, you have now disrupted your night vision. Locating whatever is making that noise in the dark is going to be a whole lot harder, let alone using your firearm. Most homes have interior walls with light colored paint. Their purpose is to reflect light throughout the house, and that’s exactly what they’ll do when you point your 800 lumen LightBlaster9000 down the hallway. Also consider reflective surfaces like metal furnishings, stainless steel appliances, mirrors, and tile. If the light is bright enough to “blind” the attacker, it may very well blind you, too.

It’s a Tool, Not a Weapon

The purpose of the tactical light is to simply see in the dark. If it throws the bad guy off his game, then great. But don’t plan on it. Use the light to identify what you can’t see with ambient light and in the unlikely event you identify someone/thing that is an immediate threat to your life, use the light to help you shoot it. For this, you need enough light to see clearly in the dark, but not so much that it disrupts your night vision.

Most light manufacturers measure the brightness of their products in lumens. For tactical purposes, a suggested minimum is often 100-200 lumens. But these numbers can be deceptive. For a light to appear twice as bright to the human eye, the lumens must be multiplied by four. So a 400 lumen light will appear to be about twice as bright as a 100 lumen light. Side-by-side, the difference between a 150 and 200 lumen light will appear to be very little. Also consider that light manufacturers have different standards and methods for measuring lumens, and they vary as much as shoe sizes do across footwear companies. Surefire’s 200 lumens might look completely different from Streamlight’s.

Your safest bet is to get a light with an advertised output of at least 100 lumens, and probably not much higher than 400 lumens. Shine it around your house at night and make sure you still have some usable night vision after you shut it off. If not, it may still be a useful light outside, but consider something less powerful for use indoors.

There is no end to the deep, dark rabbit hole of consumer flashlight technology, and you don’t need to go down that hole in order to purchase a decent flashlight (I pity the fool who gets sucked into a 13 page flashlight forum thread on the merits of beam throw vs. flood). In the end, training and practice are far more important than your choice of light.

Weapon Mounted vs. Handheld Light – What do you Use?

If you’ve already figured out what kind of light to use as part of your self-defense plan, let us know how you came to your conclusion in the comments, and don’t forget to cast your vote in this week’s poll.