2013 proved to be a remarkable, eventful, and sometimes frustrating time for ammo hunters all over the country. At Lucky Gunner, we can understand those emotions as the year proved to be a wild ride! Now, we’d like to give you a peek behind the curtain at Lucky Gunner and a look at some insider ammo stats and information.

You probably know Lucky Gunner Labs as a source of in-depth testing and insight into the ammo world. So, similarly to what we did at the end of 2012, we thought we’d give you a inside look at our biggest on-going experiment: delivering the most amazing experience possible to shooters who purchase ammunition online at LuckyGunner.com.

By now, you probably can tell how much we love data and feedback from shooters. It helps us make the best decisions about how to get shooters what they want, expect and need. With that in the back of our minds, we thought you might like a quick journey into the data and trends we noticed among shooters in 2013.

All of what we’re sharing comes from Google Analytics – we’ll admit, it’s not perfect, but it’s definitely good, consistent, and it’s considered the industry standard. So without further ado, let’s dive into 2013 in the ammo world:

Most Popular Caliber and Ammo Stats

9mm, .223 Remington are once again shooters’ favorites in ammunition 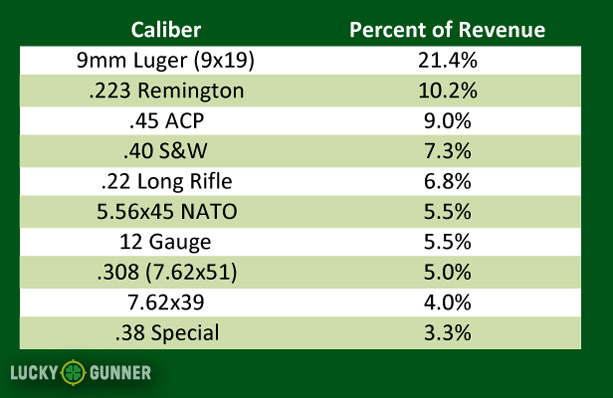 The hot 22 long rifle market hasn’t cooled so the caliber’s jump from near the bottom of 2012’s top ten to a much more significant chunk of Lucky Gunner’s sales probably doesn’t surprise you much.

Perhaps even more interesting, though, is that the .223 and 5.56 calibers, both of which were very hot early in the year due to the threat of more government regulation, make up a smaller chunk of the Lucky Gunner pie. Is that because of more competition? AR-15 shooters had sufficient ammo on-hand and weren’t worried about the government getting involved? Still, it seems doubtful that the black rifle market is cooling at all when you look at the top ten individual products of 2013.

In 2012, we received a ton of feedback from folks who were surprised California was where most of our traffic comes from. It seems most shooters expected Texas to sit atop the list of stats sorted by traffic. Given the political stereotypes of each state, that seems to make sense.

Well, in 2013 Texas took over the top spot and aligned itself with shooters’ expectations once again. 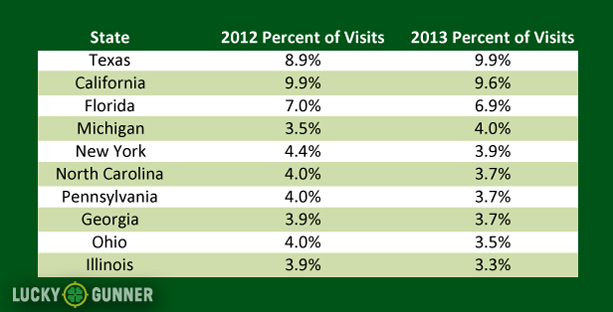 Other states of note are Michigan, where the state jumped from #10 on our 2012 visitor rankings all the way up to #4. (If you’re a Michigander that just joined us in the past year- thanks and welcome!)

If you’re into technology, you’ll likely find this interesting: Internet Explorer continues to be the top internet browser for shooters but it continues to see it’s share erode with Safari and Chrome gaining ground quickly on the Microsoft product.

It’s more bad news for Microsoft as it relates to operating systems. Windows continues to lose ground on iOS and Android users as shooters go mobile for both information and buying ammunition.

As you probably could have guessed, shooters continue to get more comfortable using their smartphones to shop for ammo and learn about it. As they make the move, we continue to see more and more mobile users at LuckyGunner.com. Are you a smartphone shopper? Is there anything about our site you’d like to see changed that would make it easier? If so, let us know below in the comments!

Thanks for a great year of serving shooters!

We’re honored to have served a lot of shooters in 2013. We’re passionate about shooting and just as passionate about offering up the best customer experience possible for our fellow shooters.

Did you see anything here that surprises you? We hope you found it interesting and if you did, please share this with your friends. The more we all know, the tighter we become as a shooting community and the better off we all are.

What do you think 2014 will bring? More of the same? No matter what, we wish you the best in the upcoming year and please know we’ll continue working hard and won’t stop pouring over data to make the best decisions we can to bring you more ammo delivered as fast as we can.

Informative tests, reviews and insights into firearms and ammunition - with the occasional explosion for good measure!