When the folks at LuckyGunner .com wanted me to review the CMMG stainless steel .22LR conversion kit they stock, I was more than a little curious to see what it could take.

The kit itself is a one-piece drop-in unit that replaces the bolt and carrier of a AR-15, and comes with a pair of CMMG ARC 26-round polymer magazines.

Some may choose to douse the stainless steel kit with a quick spray of CLP, but I decided to run it with just a small amount of gun grease on the sliding surfaces. After working the action by hand several times to spread out the grease, I slipped the conversion kit into the upper receiver of my BCM Mid-16, which I hadn’t cleaned or lubed since my last range trip several weeks ago. It fit snuggly, and so I turned my attention to the magazines.

The magazines  are interesting for two reasons: they fit open-top AR-15 magazine pouches (I’d recommend carrying them top-up), and they have tabs on the back that can be sanded or filed to closely match the interior dimensions or your rifle’s magazine well. Five minutes with a file and a couple of trial fittings later, and the magazines were snug enough not to rattle, but weren’t too tight. Perfect.

Then it was off to the range to see how the CMMG .22LR conversion kit worked. Other conversion kits on the market have something of a checkered reputation for reliability, and I was interested to see how it would work in a dirty gun.

I set up a single target at the 25-yard line, then loaded 25 rounds of the recommended Federal 36-grain jacketed LRs into one of the ARC magazines. I slid the mag home, and pulled the charging handle back (about half of its normal travel distance) to load a round in the chamber, and went to work.

It shot 3-4 inches lower than my rifle shoots 5.56 cartridges, but the group was respectable, considering the use of the carry handle iron sights and a hasty sling. I could have easily dialed the rifle’s sights in to obliterate the bullseye, but left it well enough alone and just kept squeezing the trigger. 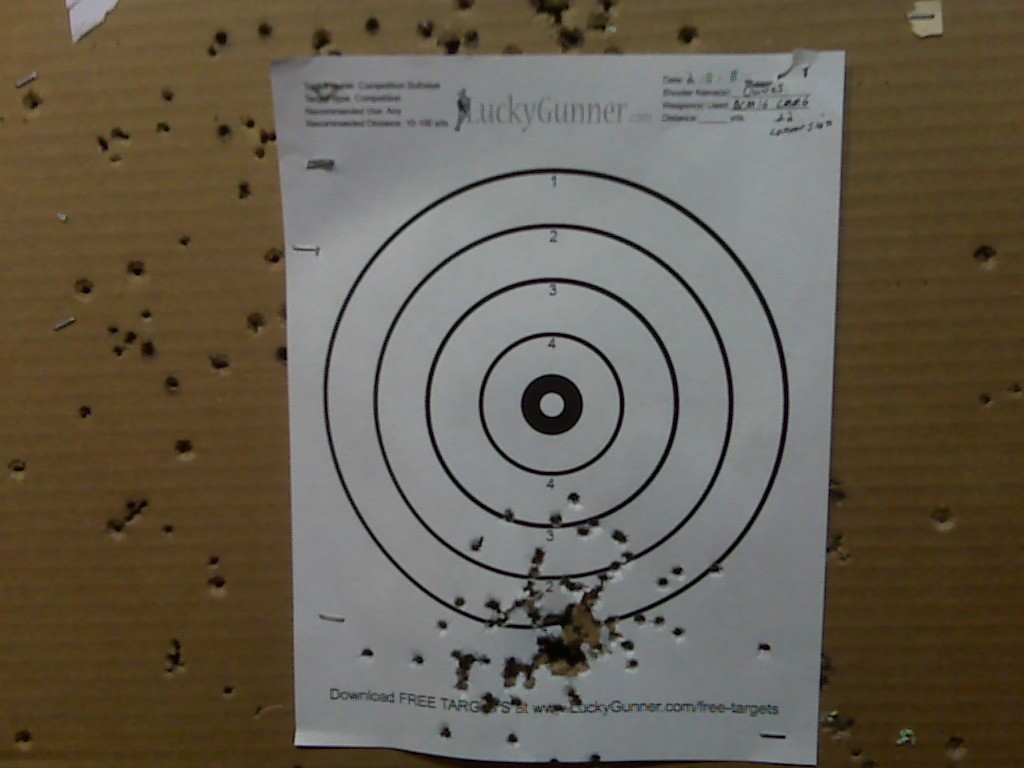 The CMMG stainless steel .22LR conversion kit worked perfectly and without a hitch until cartridge 265, when it suffered what I suspect was a shooter-induced failure-to-feed when I touched the base of the magazine against the shooting bench. A simple “tap-rack” cleared the cartridge, and I was back in business.  I fired the remaining rounds in that magazine, and another magazine, without a hitch.

After 300 rounds of .22LR through the CMMG kit in a little less than an hour, firing singes and double taps, it was apparent that it was solidly made and reliable; more reliable than I had any reason to expect. There were no kit-related malfunctions, and I simply gave up trying to make it fail. 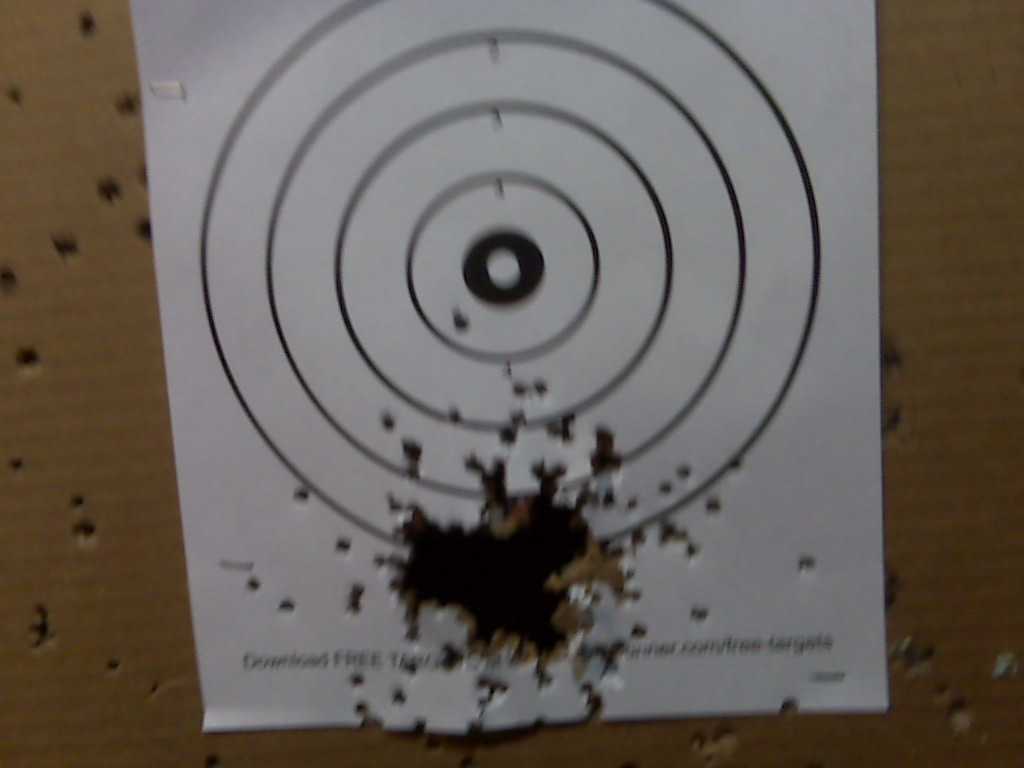 During my session, Jim, one of the range safety officers (RSOs), kept coming by every so often.

“Still workin’?” he’d ask. He was very interested in the kit, having thought about getting a conversion kit in the past. I called him over after I was done with my 12th magazine, and had him look at the kit when I pulled it out of my rifle. After 300 rounds it was caked in carbon fouling, but was still smooth in operation.

He went to get a piece of paper and pen, so he could write down the name of the kit and where to order it. He said he was going to suggest to his wife that it was what he wanted for his next Father’s Day present. 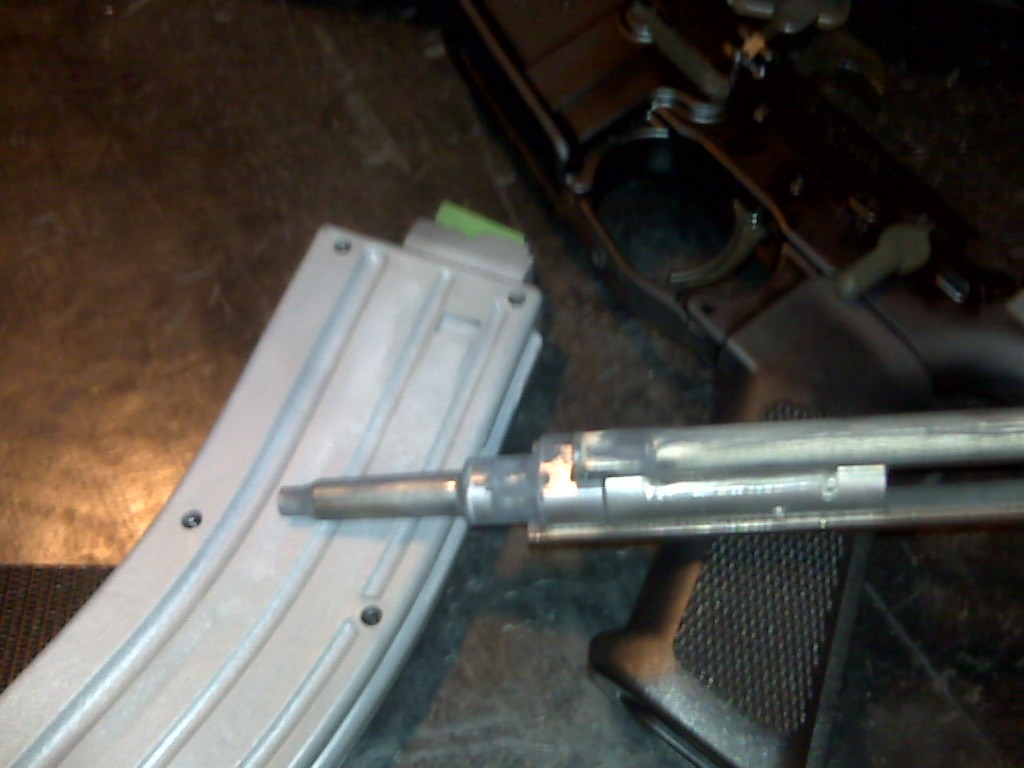 When the range went cold again I moved the target board back another 25 yards, to the back of the 50-yard bay. That’s about my limit of what I can do with iron sights and a target printed on a piece of 8.5x11 computer paper. At that distance I can’t even make out the bullseye on our indoor range, and was going to be content just to shoot at the center mass of the white of the target against the brown of the cardboard on the target frame.

I loaded 21 rounds (meant to load 20, but obviously miscounted), slipped my arm through the sling, and concentrated on my breathing.

The results weren’t bad at all. 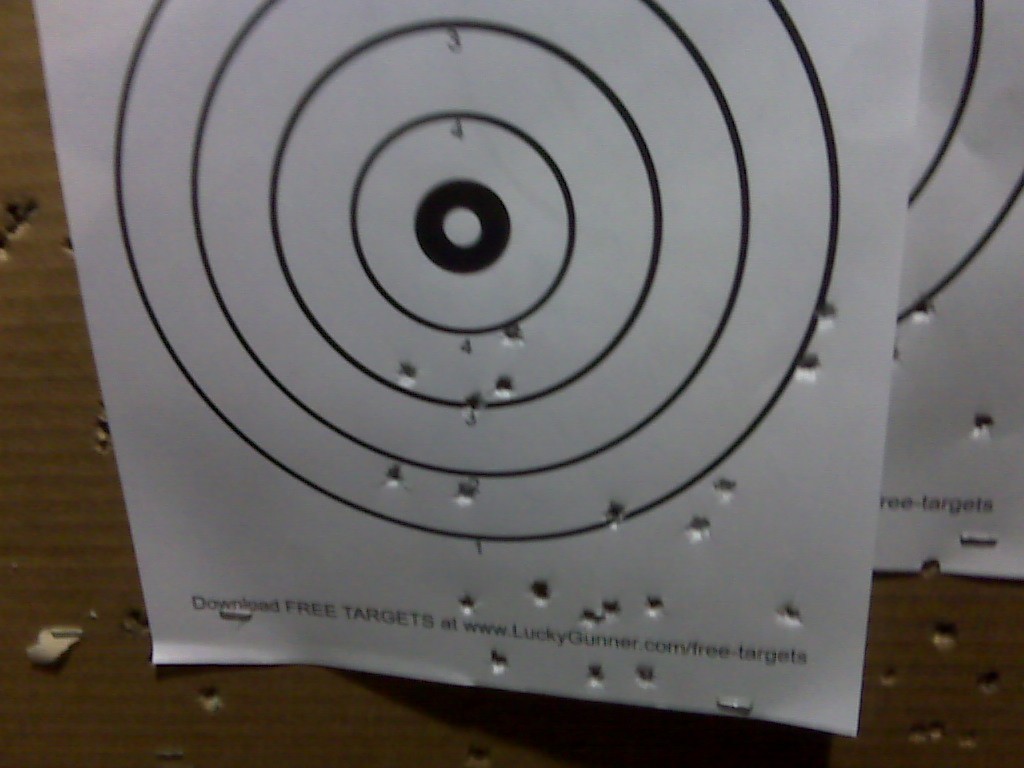 That’s 21 rounds, all on paper at 50 yards, with iron sights, using a conversion kit that just fired 300 rounds, in a barrel that hadn’t been cleaned in 500 rounds (200 rounds of 5.56 from my previous range session, plus the 300 rounds of .22LR). In my book, that is phenomenal performance, and far better results than anyone has a right to expect out of .22LR conversion kit.

By the time I left the range, I’m pretty sure Jim was sold on the CMMG stainless kit, as was I.

When I got back home, cleaning the conversion kit was simply a matter of swabbing down the carbon-caked parts of the unit with powder solvent and  running over it with a brush. I may get around to cleaning the interior of the unit one day, but as long as it continues to run flawlessly, I don’t see much of a point in it.

LuckyGunner.com has really packaged a nice bit of kit together here with the CMMG stainless Steel conversion kit and two 26-round ARC magazines for $210. I’m going to have to talk to talk to them about this one.

Somehow, I don’t think it is going to be returned.