Editor’s Note: I’m excited to introduce the contribution below from Tamara Keel, who happens to be one of my personal all-time favorite gun writers, not to mention a walking encyclopedia of firearms knowledge and an overall swell person to know. Tam’s writing can be found all over the web and in print, including Shooting Illustrated as well as her own blog.
-CB

When I first got into the gun business, it was the early 1990s and I was working in a gun store that was just on the outer fringe of metro Atlanta’s Oort Cloud of shopping malls and chain restaurants. It still had that small-town Southern atmosphere, so first-time gun buyers were rare. When I encountered one, it was usually a guy who’d just moved his family into one of the new subdivisions that were popping up like mushrooms to accommodate commuters to Atlanta’s burgeoning north side.

Then came the “Assault Weapons Ban” of 1994, followed by a series of gun sales spikes thanks the Y2K panic, the 9/11 attacks, the Great Panics of ’08 and ’12, and the current spate of terrorist shootings. I’ve worked at several different gun shops during all of this, first in suburban Tennessee and then in Indianapolis. Over that time, the demographic of first-time buyers I encountered has shifted. Instead of young, suburban dads, their ranks now include more older people, middle-aged housewives, and grandparents.

Often these new buyers once owned a gun when they were younger and left it behind at some point. It may have been a part of their former rural lifestyle, or perhaps they had experience with firearms during their service in the draft-era military. Now, however, some news story made them decide that it was high time to look into getting a concealed carry permit so that they could look after themselves in uncertain times.

These new customers arrived at a time when the market was more prepared than ever with high-quality firearms designed specifically with concealed carry in mind. No longer limited to the usual categories of little pocket pistols in traditional mousegun calibers and classic small-frame revolvers, but several manufacturers had recently released slim, high-quality compact single-stack 9mm pistols at very competitive prices. The Smith & Wesson M&P Shield and the Glock 43, in particular, became the new standards in this class, selling in droves, and often to these newcomers to the world of handguns. 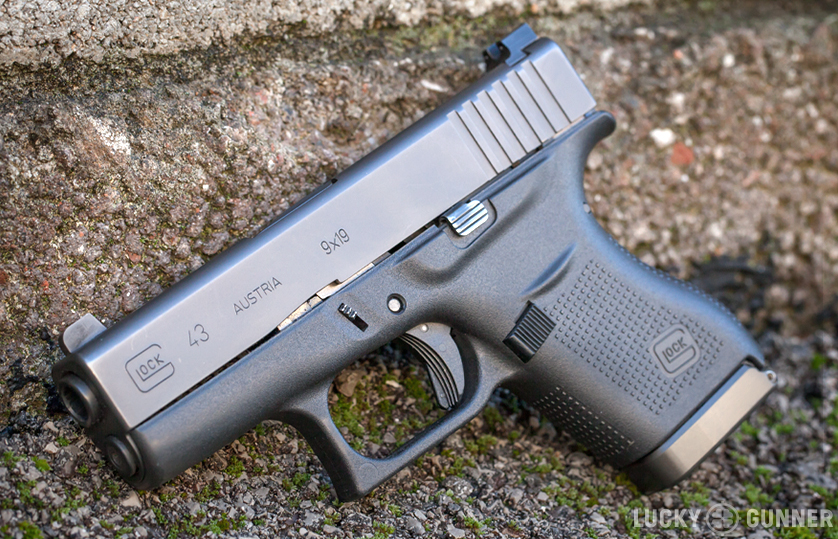 These little nines, however, had within them the seeds of problems down the road for this class of customer.

First, there’s no way around the fact that a tiny little pistol, weighing less than a pound and a half fully loaded, is going to have some recoil. Not wrist-snapping or anything, but enough that it can be startling to the novice shooter.

Second, the light weight of the pistol’s slide and the striker-fired action means that the recoil spring absorbs much of the slide’s rearward velocity, requiring it to be a relatively heavy spring. The tiny slide, however, does not easily afford the area for the sort of over-the-top, whole-hand grab that works so efficiently for those with little grip strength. As a result of this combination, I watched many customers struggle to operate the slide on these guns.

Lastly, being a recoil-operated firearm, the gun requires a firm platform to work against. However, the guns were often sold with standard velocity, or even “reduced recoil” or “lite” loads. As a result, in the hands of someone whose grip strength was already compromised by small stature, age, or infirmity, these guns often required an employee to assist with the clearing of failure-to-eject malfunctions on the range.

Despite the popularity of these nines, their potential to cause issues for a certain class of first-time gun buyers should leave us asking whether there might be a better option.

I received a test gun from Sig Sauer, a P250 Compact that was different from the ordinary P250, in that it was chambered for the .380 ACP cartridge. 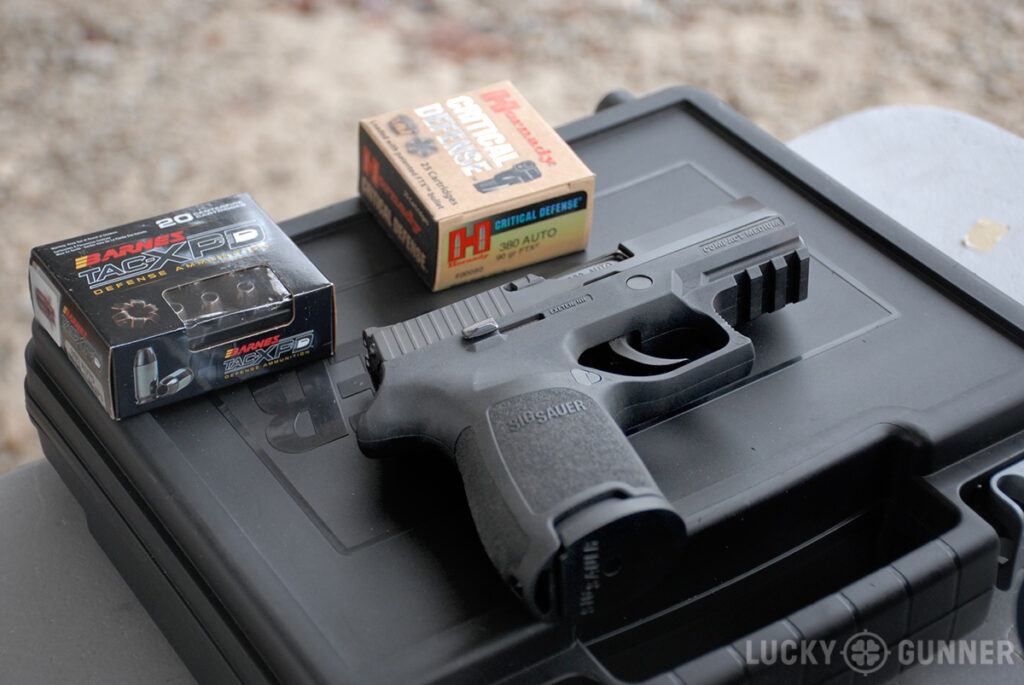 Now, I’m not normally a fan of the smaller round for self-defense, but the P250C, which was roughly Glock 19-sized, packed fifteen of them in the magazine. That’s a lot of BBs. And with a 3.9” barrel, the gun gets the most out of the .380 cartridge. Full metal jacket ammo usually averaged on the north side of 900 feet-per-second, and Speer’s 90gr Gold Dot hollow points averaged a blistering (well, blistering by .380 standards) 1080fps.

Secondly, the P250 has a double-action-only action that is nearly ideal for someone who’s not going to be shooting for a hobby. A problem with shooters who don’t spend a lot of time ingraining trigger-finger discipline is what some instructor friends call “woobie checking”; in moments of stress, in force-on-force or scenario-type training, the shooter’s finger will unconsciously dart down to check the trigger, as though the shooter is trying to subconsciously reassure themselves it’s still there. The P250 has enough pull weight at seven-and-a-quarter pounds, combined with the length of a true double-action pull, to make it resistant to “woobie checking”, and still the weight and length of pull are not too heavy or long to preclude decent shooting by most any shooter. (Protip: If you don’t tell a novice that a double action trigger is supposed to be “hard to shoot”, they won’t act like it is.) 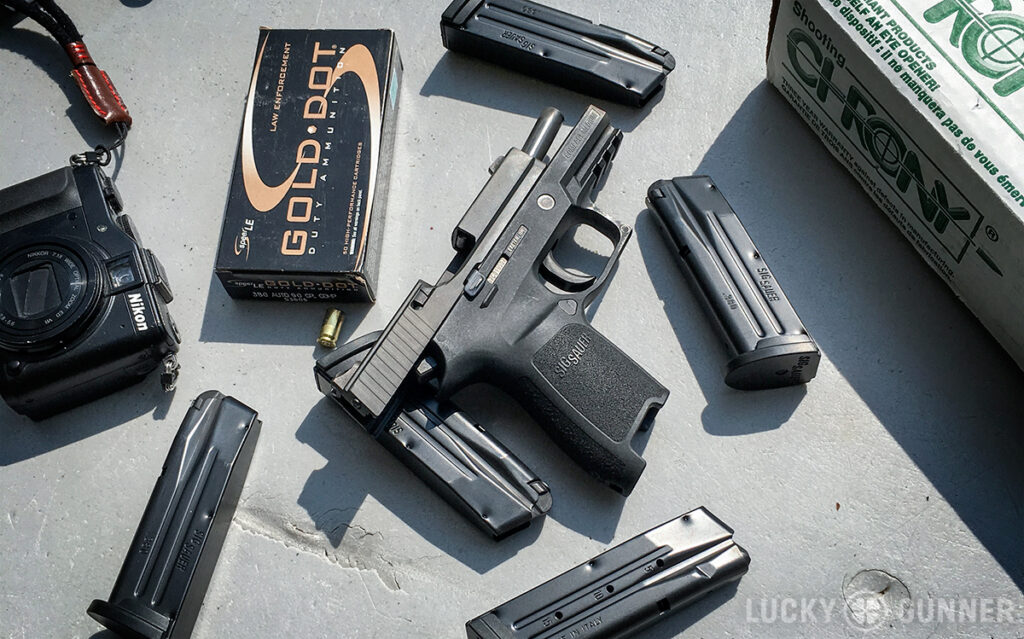 Finally, and most importantly, being hammer-fired and recoil-operated, the gun is equipped with a crazy-light recoil spring. Everybody I’ve let shoot this gun comments on how easy it is to work the slide. There’s no way to describe it, relative to most centerfire pistols; it’s more akin to working the slide on one of the full-size rimfire pistols like the M&P22 or a 22 rimfire conversion on a Glock.

Most of these new first-time gun buyers are not buying kydex AIWB holsters, tuckable spare mag carriers, and centerline fixed-blade knives to go with their guns. Mabel and Arthur are not rolling at their local BJJ gym or showing up at USPSA matches. They’re not embracing a “CCW lifestyle” so much as buying some peace of mind, for which they will happily take a class or two (we had great success in selling two-hour basic introductory classes to this demographic) but are not willing to make major sacrifices. 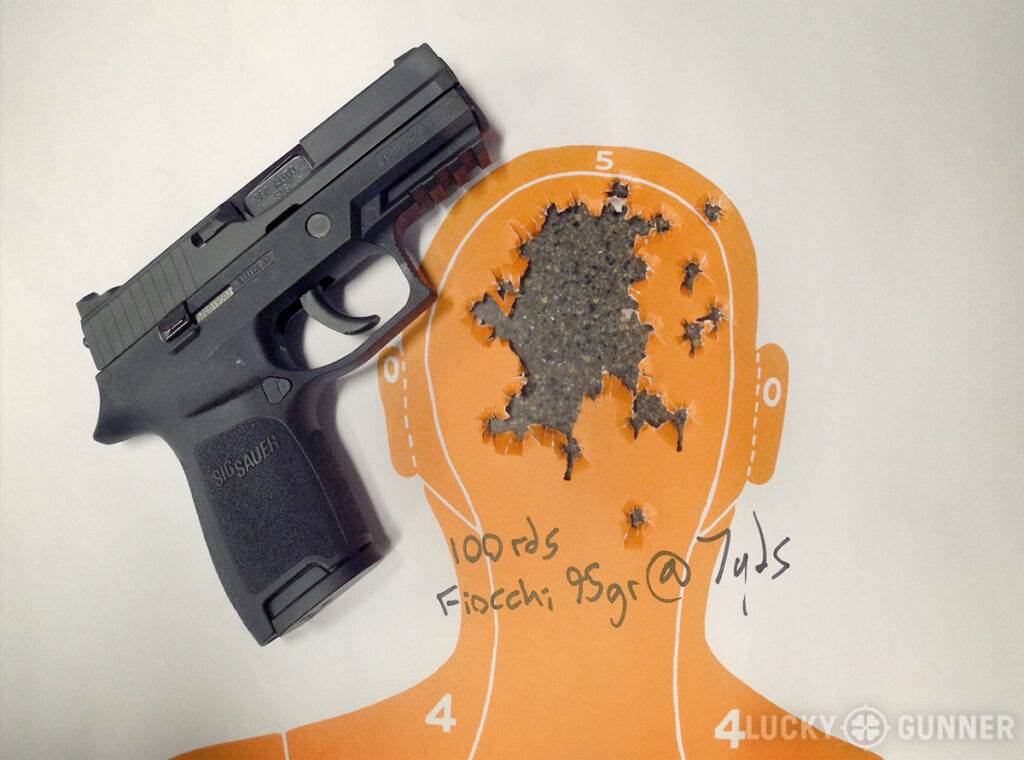 The “Grandma Gun” is going to be used to answer the door with more peace of mind. It might go in a purse or glovebox on occasion and otherwise probably sit in a lockbox by the nightstand. Which is more likely to effectively fill this role: A small pistol which is difficult to manipulate, requires a perfect grip to run reliably, and has off-putting recoil? Or an easy-to-manipulate, easy-to-shoot gun with manageable recoil?

This is a case of a growing customer base looking for an ideal pistol, and a pistol just waiting to be discovered by its ideal target demographic.

Not that long ago, if you wanted to find reliable information about using firearms for self-defense, your options were severely...