The Sig P322, released earlier this year, has attracted a lot of attention for its double-stack 20-round magazines and optics-ready slide. These features are often requested, but seldom found in .22 LR pistols. Has Sig designed the most forward-thinking .22 LR pistol we’ve seen in ages, or does the execution leave something to be desired?

Hey everybody, Chris Baker here from LuckyGunner.com. Today, we’re looking at the new Sig Sauer P322. It’s a semi-automatic .22 LR pistol with a couple of interesting features that we don’t often see in most other 22s: an optics-ready slide and double-stack 20-round flush fitting magazines.

The P322 is similar to a .22 training pistol in the sense that it looks and feels like a defensive style pistol. But unlike rimfire trainers such as the Glock 44 or the FN 502 Tactical, the P322 is not a 22 version of an existing model. The dimensions are similar to the P320 Compact, but the shape is different, and it’s a little slimmer. That means it is not compatible with holsters for any existing Sig models. 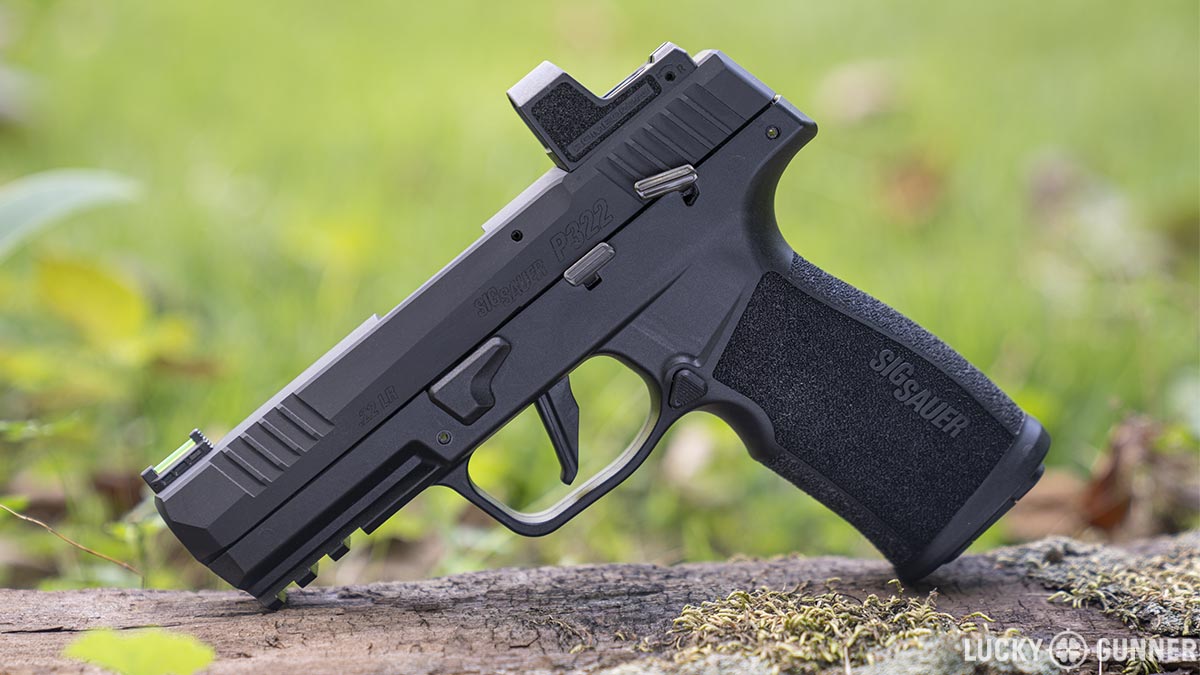 It seems like Sig was maybe going for something that could serve as a training pistol either for a P320 or for a P365. That’s similar to what Smith & Wesson did with the M&P 22 Compact, which is sized somewhere between the centerfire Compact and the original single stack Shield.

This makes for a convenient comparison because I’ve been a big fan of the M&P 22 Compact since they first came out eight years ago. Even though I no longer own any centerfire M&P pistols, I kept the 22 Compact because it’s been very reliable and just an overall well-designed .22 pistol. So as far as I’m concerned, this is the gun to beat for any new defense style 22.

The one thing the M&P Compact is missing that I wish it had is an easy way to add a red dot sight. There are optic mounting plates that fit into the rear sight dovetail. But the gun wasn’t designed for that extra weight, and that tends to compromise reliability.

So that is why the Sig P322 caught my attention. The slide comes from the factory with a cutout to direct-mount a red dot optic. You just remove a couple of screws to pull off the rear sight assembly and then you can mount a compact red dot optic. It’s designed to fit the Sig Romeo Zero red dot. That is not included with the gun, but we happened to have one sitting around so we went ahead and mounted it. Any other optic with the RMSc footprint should also fit. Adapter plates are available from third party companies for other optic footprints like the RMR.

If you just want a .22 with a red dot, we’ve had target-style .22s available with that feature for years now. But it’s not something you could easily find on the defense style 22s. FN released the optics-ready 502 last year, and that was the first as far as I know. I believe that makes the P322 the second.

The other interesting feature here is the 20-round double-stack flush-fitting magazine. Almost every other .22 pistol has single stack 10-round mags. 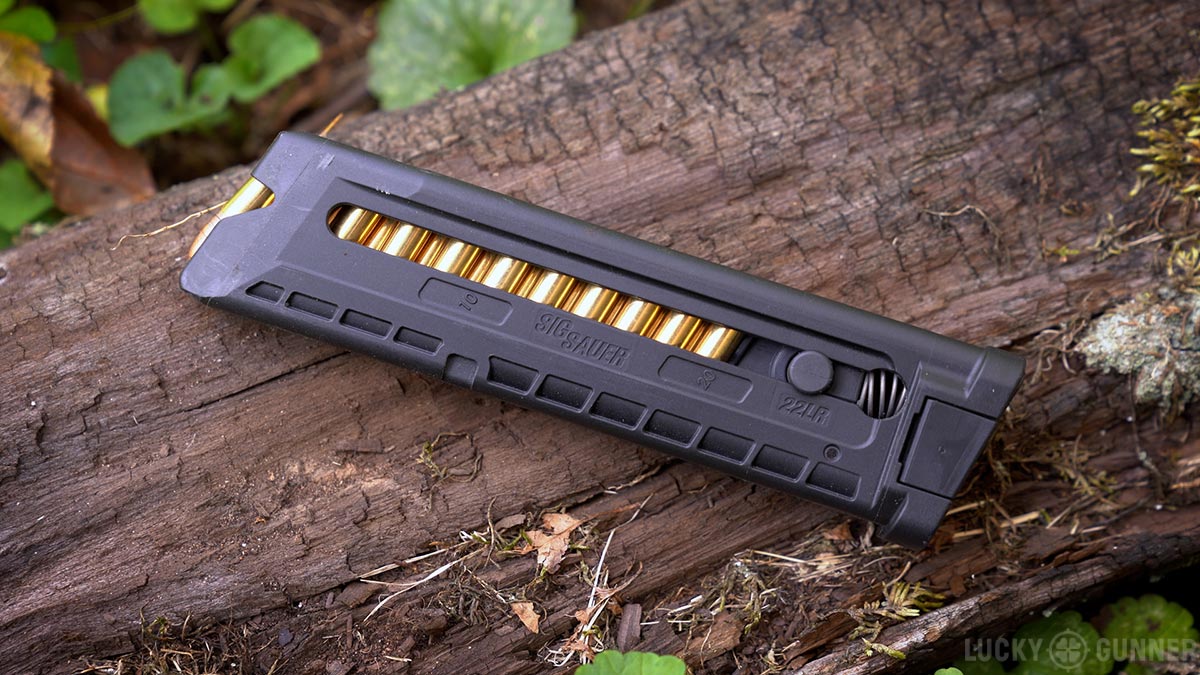 The FN 502 comes with an extended 15-round mag, but it’s still a single stack. The Keltec CP33 has those crazy quad stack magazines. But generally speaking, rimfire pistols already present enough challenges with reliable feeding and that’s why most manufacturers stick with a proven single stack design. If Sig has cracked the code on a reliable double-stack 22 pistol magazine, that would be a significant achievement.

So right out of the gate, the P322 is looking very promising. A couple of other features here: the takedown is quick and easy. You just lock the slide open, rotate the takedown lever, lift the slide up, and then forward to remove it. Inside the frame here, you can see the cocked hammer. It is a single action only design with an ambidextrous manual safety. It’s a decent safety design with a very positive click on and off. The pistol comes with a flat trigger shoe installed, but there’s also a curved trigger shoe included in the box if you want to swap that out. The muzzle is threaded, and with the included adapter, you can attach a suppressor.

That’s a lot of potential. Did this Sig P322 live up to that potential? I am very sorry to say that it did not.

Let’s start with the trigger pull. If I’m honest, this is more of a nitpick than a serious complaint. It’s a little spongy feeling. After the initial takeup, the trigger has that springy plasticy feel that you get with some striker-fired pistols. It’s not nearly as crisp as the triggers on the P320s and P365s that I’ve shot. So if you do want to use this as a training analog for your centerfire Sig, don’t expect the trigger to have quite the same feel.

It’s a very accurate pistol. I was able to get a couple of 5-round groups under an inch shooting from a rest at 25 yards. But it’s difficult to take advantage of that accuracy potential with such a mediocre trigger.

The bigger issues I had with this gun are all related to its inability to function reliably.

The slide stop does not work correctly. It *barely* locks the slide open. The slide will close if you just look at it funny. Or any time you insert a loaded magazine. The slide doesn’t always lock open after firing the last round. When it does, if you remove the mag, the slide closes. This gets a lot worse when the gun is warm. It seems fine now, but every time we’ve taken it to the range, the slide stop issues return.

The double stack magazines work surprisingly well. We’ve run a little over 1000 rounds through the gun, all with the two magazines that came in the box. We tried several different brands of ammo. It did not like the Federal Punch self-defense ammo at all. It didn’t even want to chamber the first round of that stuff. That’s not too surprising because that load uses an unconventional bullet shape. With pretty much everything else, it’s fed very reliably. We had maybe three failures to feed, and at least one of those was probably from improperly loading the magazine. About half the ammo we ran through it was 40-grain round nose CCI Mini-Mags, and it didn’t seem to have any issue with cycling that load. 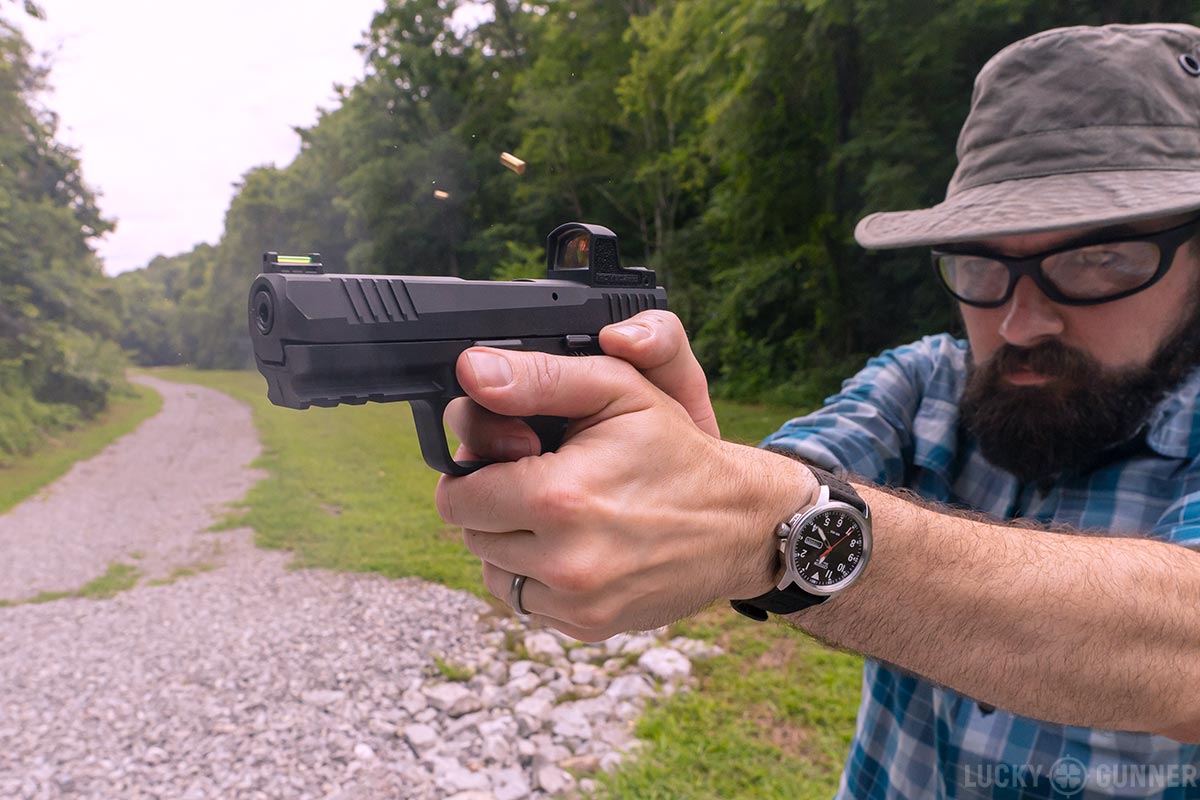 However, we did experience numerous failures to fire across all of the loads we tried. They became more frequent when the gun started to get dirty. But even when it was clean and freshly lubed, we still got the occasional click where we expected a bang.

Of course, the issue of light primer strikes is one that commonly plagues 22 pistols in general. Any time a new model comes out, we’re always hoping that they’ve figured out a way to achieve more reliable ignition. Sadly, Sig does not seem to have solved that problem with the P322.

The last issue I want to mention didn’t show up until we had put about 400 rounds through the P322. Our camera guy, Kenneth, was shooting at our steel at 50 yards and just wasn’t hitting anything. So he shot a few rounds at five yards into a B-8 bullseye and this is what it looked like. Severe keyholing from the bullets tumbling or yawing in flight. He checked the barrel and saw the culprit was the significant build-up of lead, especially evident at the muzzle.

We got the gun cleaned up and took it back out the next day. After a few hundred more rounds, we saw a little of the keyholing here and there, but nothing like the first time. My guess is that most of the leading was coming from the non-plated ammo we had been shooting the day before.

In any case, I looked around online and this is apparently a common issue with the P322. I don’t know if the barrels are out of spec or something, but it looks like a lot of other P322 owners have experienced an unusual amount of lead build-up. Just like in our case, the first symptom is usually a decline in accuracy and keyholing on the target.

Curse of the Early Adopter?

Now, even with all of those problems, I’m still holding out hope that the Sig P322 could be a good pistol. Maybe not this specific P322. This one needs a lot of work. Maybe Sig will fix it for us. But I think most of these issues, aside from the squishy trigger, are flaws of manufacturing rather than design.

Unfortunately, it is common these days for gun manufacturers to treat early adopters like their guinea pigs. They wait for the customers to tell them what problems have come up in production. Then they implement the necessary changes for the next batch of guns. That’s why it’s almost always a good idea to wait at least a year before buying a new model; especially if it’s a completely new design like the Sig P322.

And I’m not trying to single out Sig here. The FN 502 Tactical is another great example, except they had to actually issue a recall because there was a safety issue. 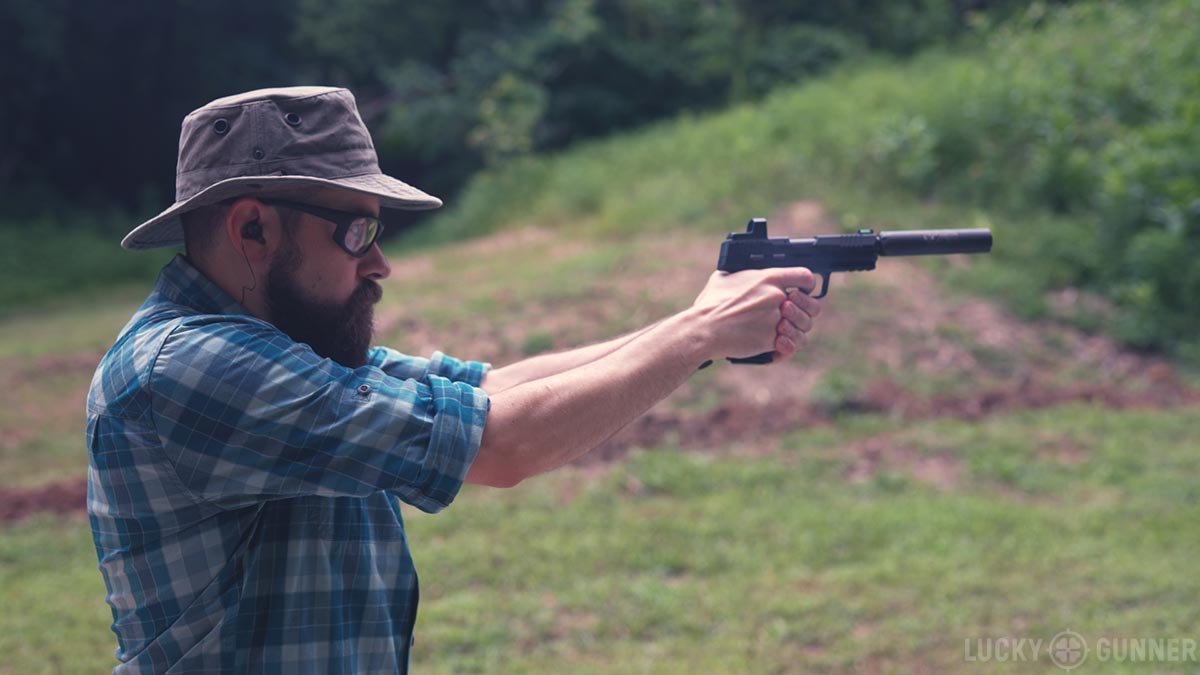 If you’re interested in the P322, you might want to wait a while before you buy one. Give Sig a chance to get the bugs worked out and let the price cool down. The MSRP is $450 but it’s selling at a lot of places for between 5 and 600. That’s a lot to pay for a .22 that may or may not have problems like what we’ve experienced with this one.

Personally, while I think the 20-round mags are cool, that extra capacity is not something I’ve felt I was missing on other .22 pistols. I would just like to see a defense/training style .22 that’s optics ready and reliable, even if that means settling for the more traditional 10-round mags. For now the M&P 22 Compact will continue to be my go-to rimfire pistol. But I hope we get a chance to revisit the P322 sometime in the future.

I hope you guys have found this review helpful. If so, please be sure to subscribe to our channel if you haven’t already, that really helps us out. And what helps even more is when you buy your ammo from us with lightning fast shipping at LuckyGunner.com.