Editor’s Note: The following article comes from Kevin Creighton. Kevin has been a longtime shooter and outspoken supporter of the second amendment but it wasn’t until the last few years that he got serious about learning more about shooting for the purpose of self-defense. I believe the 9mm Smith & Wesson M&P Shield that Kevin discusses in this article is one of the better single-stack subcompact pistols available right now, and while I wouldn’t necessarily recommend all of the same accessories Kevin mentions here, he has certainly done his homework, and I think there is much the average gun owner can learn from his approach to choosing his everyday carry gear. You can find out more about Kevin and his other writings here.  -CB

I realized the advantages of small 9mm pistols quite early in my concealed carry journey. In fact, the first gun I bought specifically to carry concealed while outside of the house was a subcompact SCCY CPX-1. While the small size and light weight of that gun served me well, I eventually reached the point where I couldn’t find the accessories and upgrades I wanted because they were not available for the SCCY, so I switched over to carrying a Smith and Wesson Shield in 9mm.

As Chris said in his earlier article on the Glock 43, the primary reason to carry a single stack 9mm is its ease of carry and concealability. The Shield predates the Glock by a few years, and it has benefited from a number of accessories from third-party manufacturers that improve its ease of use. I bought my Shield as an everyday carry gun, and it has served in that role very well these past few years.

One of the first things I noticed about the Shield was its trigger. Due to the striker-fired action, the stock trigger on the Shield is quite good, especially in comparison to similar-sized double-action only guns such as the Ruger LC9 and Kel-Tec P11. To improve the Shield’s trigger pull even more, I installed an Apex Tactical Duty/Carry Trigger Enhancement kit. The kit was easy to install in under an hour with the tools I had around the house, and it dramatically improved the reset, travel, and break of the trigger, and it also dropped the amount of effort needed to fire the gun from 6.5 pounds to just over 5 pounds. I have well over 2000 rounds with the Apex trigger at this point, and despite installing it myself (I’m not known for my mechanical inclination), I’ve had no hiccups and no issues with ammunition malfunctions due to the striker not having enough force to ignite the primer.

The stock sights on the Shield are the common three white dot variety, and I’ve found that style of sight just doesn’t work for my eyesight. My eyes tend to get confused and dart between the front and rear dots, and in addition to this, the stock sights were not easy to see at night or in low light. To improve the sight picture, and my ability to fire the gun accurately, I swapped out the stock sights for a set of Trijicon HD night sights, and I’m very pleased with the results. The front sight is very easy to see in daylight, and the tritium-powered night sights at the rear stay unnoticed and out of the way until they’re needed. While I run fiber-optic sights on my competition guns, I prefer the bright red dot/night sight combination of the HD sights for everyday use on a carry gun.

The night sights are a good upgrade, but I also prefer to have a laser and flashlight on my gun for low-light situations. A weapon-mounted light is never a substitute for a handheld flashlight, but a light on your gun allows you to have both hands on your gun for more accuracy. It also allows for use of one hand to open doors and do similar actions while keeping a light on what’s in front of the muzzle of your gun. There are many light/laser options out there for the Shield, and the one I settled on was the Streamlight TRL-6. With 100 lumens, it’s bright enough to light up a room and has a red laser that lets me see where my rounds would land at night time or in low-light. 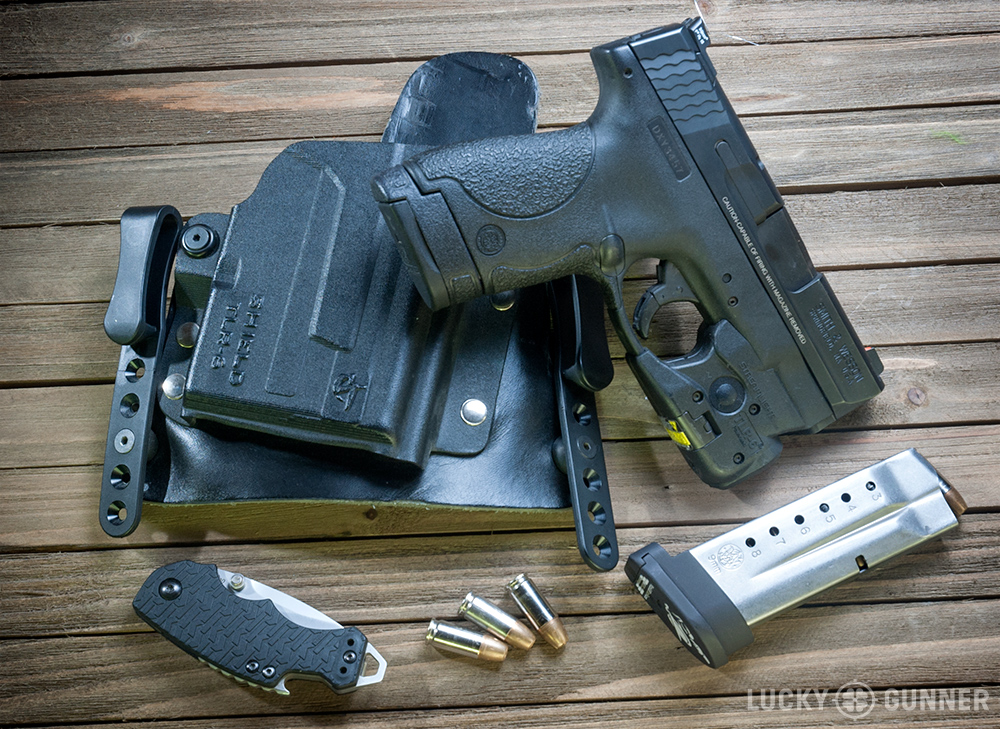 I’m completely sold on the benefits of a laser sight on a defensive pistol. They are not a substitute for the front and rear sights, but they allow you to make shots from awkward shooting positions and in low-light that are not possible to do with conventional notch and post sights.

Adding a light and laser to your gun means very little if you don’t have your gun with you when you need it most, and finding the right holster is essential to getting in the habit of carrying it. I prefer hybrid inside the waistband holsters (IWB) because I’ve found they work best for how I dress and how I am built. I lived in Arizona for many years and now I live in Florida, so wearing a heavy cover garment for concealment would make me stick out like a sore thumb. IWB holsters work particularly well in such locales because they conceal the pistol more than outside the waistband holsters do, and while you may need to buy your pants an inch or two bigger than usual, I find that a lighter, more casual appearance while I’m out and about is worth the tradeoff. I carry my Shield at the traditional 3-4 o’clock on my strong side rather than at the appendix position because it works better for me. I know a lot of people are fans of appendix carry, but  I just do not have a body type that works well with appendix carry for extended periods of time.

I started out carrying the Shield in a Crossbreed Minituck holster, and then I switched to a Comp-Tac Merc holster to accommodate the light and laser. While I like Crossbreed holsters quite a lot and own them for other guns, I really like the range of adjustability and low-profile clips on the Comp-tac holster, and the compact size of the Merc works well with the compact size of the Shield.

The advantages of the Shield are that I can carry it pretty much anywhere, and with its small size and light weight, there’s really no reason for me not to carry it. The upgraded sights and trigger make it a very accurate gun for its size, and the light and laser give me an edge when darkness falls or the lights go out.

However, the things that make the Shield easy to carry, small size, and light weight also mean that the Shield handles recoil with less aplomb that larger guns in 9mm. As you can see in the photo, the muzzle flip for this gun is quite pronounced, but I’ve progressed in my shooting ability to the point where I can keep the flip under control and deliver any follow-up shots quickly and accurately. Practicing has made such a difference in my ability to handle recoil. The shorter barrel and slide also make for a shorter sight radius, but I’ve found that I can get multiple, repeatable hits on torso-sized target at 50 yards with this pistol, so that’s not much of a problem.

The Shield’s smaller size also means it carries fewer rounds than larger 9mm pistols. With only seven rounds in the standard 9mm magazine, the Shield needs all the ammo capacity it can get. I consider the extended eight round magazine for the Shield to be the standard magazine for the gun, not only because it holds more rounds than the seven round magazine but also because it allows me to get a better, firmer grip on the gun. I’ve upgraded the eight round magazines with “Plan B”  baseplates from Paul Carlson to improve the reliability of the eight-round magazines and give me a fuller, more secure grip. 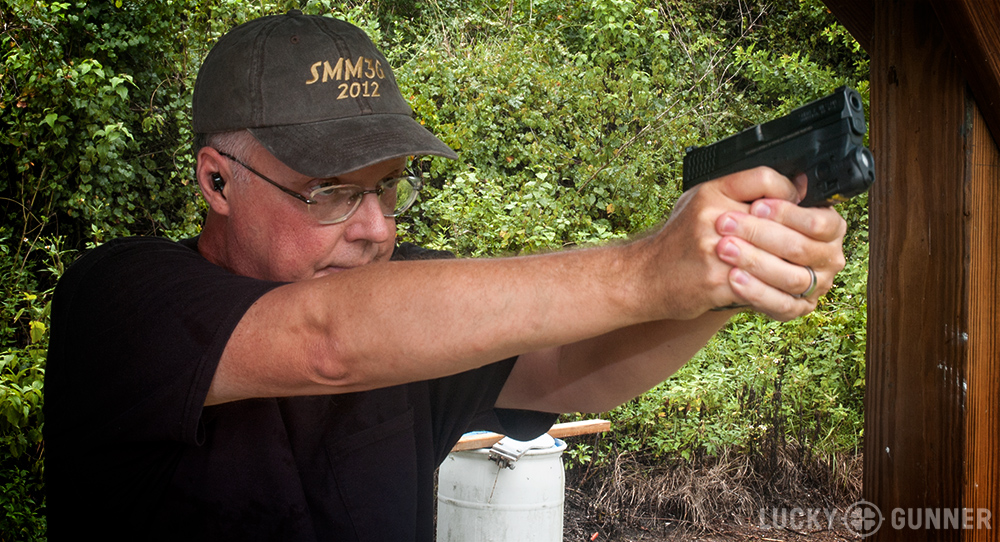 I’m a big believer in training, practicing, and competing in shooting matches with your carry gear. I’ve shot the Shield in IDPA matches in the Compact Carry Division (CCP), and it performed well with no issues from the gear I use. I’ve also used the Shield in several pistol training classes, and the only issue I ran into using it in a day-long class is that I had to reload more often than other students using higher-capacity pistols.

The bottom line for me when it comes to a personal defensive firearm is that it should be a gun you can carry every day, and that’s where the Shield really shines, especially with the upgrades I’ve mentioned. There are larger pistols out there that offer greater ammo capacity, but they come with the tradeoff of being thicker, heavier and more awkward to carry. I’m not sure that I’d recommend the Shield as a first time gun for new gun owners. The small size that makes it easy to carry also means you need to pay more attention to controlling recoil than with larger, heavier guns. However, because I’ve trained with the Shield and shot it in competition, I know how we perform together, and I have confidence that I can rely on it (and myself) to protect what matters most to me, which is the reason I started to carry a pistol in the first place.

The journey towards a comfortable, accurate concealed carry pistol has ended for the foreseeable future. I’m completely satisfied with how my Shield is now set up for concealed carry, how it performs, and now I can move on to other things that will help protect my family.