Of the three major types of small arms — rifle, pistol, and shotgun — the shotgun is by far the most dependent on a good fit between the gun and the shooter. Often without any sort of true sights, the shotgun is most often aimed through consistent positioning of the gun with respect to the shooter’s body, allowing the shooter to naturally track a target with their eyes and knowing the gun will follow. The part that establishes this crucial shooter/weapon connection is, of course, the stock.

There are tons of options out there for shotgun stocks, ranging from classy straight-gripped English styles to spacey folding models, and even standalone pistol grips which completely lack a shoulder stock altogether. A competitive shotgunner would never overlook gun fit when choosing a trap or skeet gun, and neither should anyone shopping for a home defense weapon.

For our purposes, we’ll be looking at the basic types of stocks found on defensive shotguns; the traditional stock, the pistol grip stock, the standalone pistol grip, and Magpul’s SGA stock. I spent some time on the range with a couple of Mossberg home defense models and utilized all of these configurations in order to better understand the strengths and weaknesses inherent to each.

The traditional stock is by far the most common style of stock found on any shoulder-fired firearm. It’s very natural to hold with a curved semi-pistol grip, similar to what is often found on revolvers. It provides decent control of the gun even when held by the firing hand only. This stock configuration is optimal for most applications because it’s going to feel very familiar to most shooters. It will tend to point more naturally than any other style of stock because it keeps the firing hand very close to and oriented along the line of the bore.

Additionally, most shotgun platforms are designed with this style of stock in mind, and the controls on the gun are placed accordingly so you likely won’t have to try to learn any sort of crazy weapon manipulation techniques to make use of the safety and slide release. The only real issue with the traditional style stock is that most will be a little long for use on a dedicated defensive shotgun, and they’re very rarely adjustable. Fortunately, these stocks can be cut down or purchased in a youth size to grant a more usable length of pull. 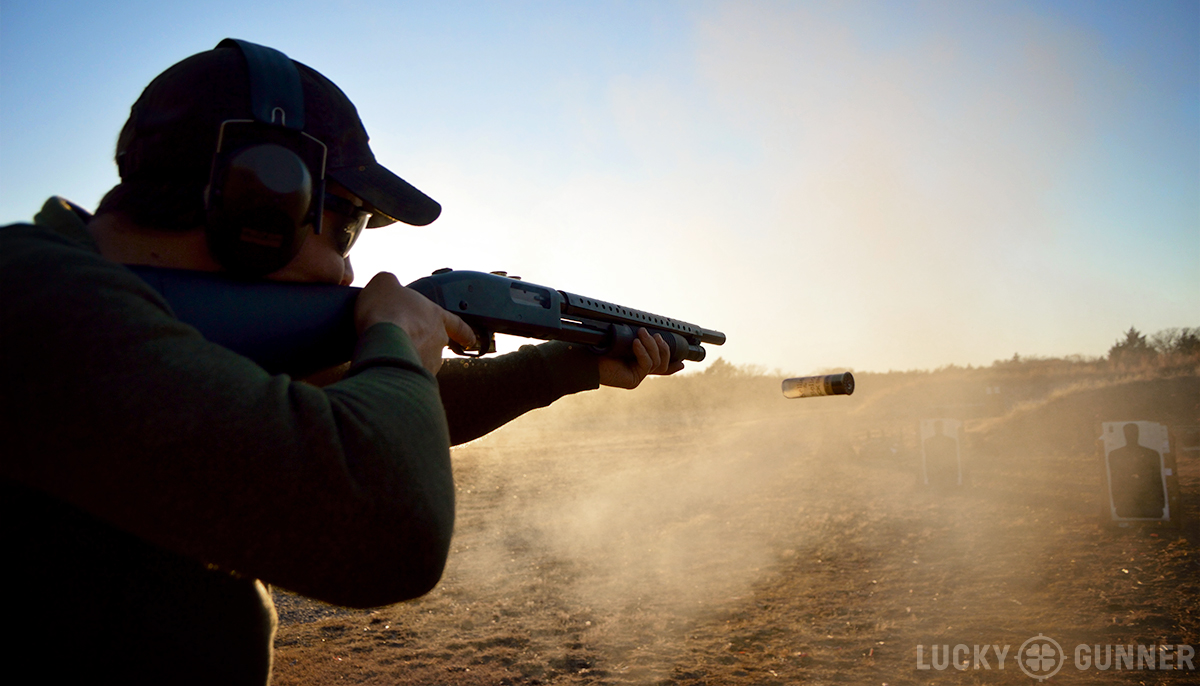 Overall I found that I did my best shooting with this setup. Pointing the gun was very natural, which wasn’t surprising given my clay-shooting background, and the Mossberg’s controls are definitely located with this style of stock in mind. The safety and slide release could both be operated without adjusting my firing hand even when shooting left-handed. I would definitely recommend this style of stock for any home defense shotgun, but even more so for the Mossberg platform in particular due to the placement of the safety.

Pistol grip stocks are common on tactical style shotguns and even on some hunting-oriented models as well. The discrete, nearly vertical pistol grip allows for a little better leverage on the gun compared to the traditional stock as well as a more rifle-like feel overall. If you’re used to shooting an AR or similar rifle then you may feel more comfortable with a pistol grip stock configuration.

One-handed control is going to be a little better with a pistol grip stock, as well, which will make reloading easier since you’re better able to support the weight of the gun with one hand. Other tasks, such as potentially steering children away from danger with your off-hand in a home defense scenario, will also be a little easier for much the same reason.

Another benefit of the pistol grip stock configuration is the large number of available options. Many pistol grip stocks offer the ability to adjust for length of pull, reduce recoil, or have the ability to fold either along the top or to the side of the receiver for easy storage. Gun fit may not be nearly as good as with a standard stock in terms of positioning your eyes at the correct level relative to the bore, but depending on your particular needs, it could be worth the trade off. One thing to be wary of, however, is that not all guns are designed with a pistol grip in mind, and this can lead to some minor problems that you’re going to have to work around.

During my drills with the Mossberg using an ATI pistol grip stock, one of the first issues I found was that I had to disengage the safety with my support hand. I also found that accessing the slide release was much more difficult, and the gun could not be fully disassembled without first removing the stock entirely. I’d give the pistol grip stock a slight advantage in terms of keeping the gun under control during reloads versus the traditional stock, and getting on target quickly wasn’t a problem at all.

Most of my issues with this setup were really Mossberg-specific, and I think overall a pistol grip stock certainly has its merits in actual application. If you do have a Mossberg and wish to use a pistol grip stock, I’d encourage you to check out the Magpul SGA or make sure you go for a quality adjustable model to at least give you some extra versatility. I’d also make sure you’re able to find a method of operating the controls that works well for you and practice it enough to be proficient at it.

Next, there is the standalone pistol grip, often referred to as PGO for “pistol grip only.” By omitting a shoulder stock entirely, PGO shotguns can be extremely short, allowing for much easier storage and close quarters handling. Unfortunately, shotguns in this configuration suffer drastically in terms of both accuracy and speed when it comes to actually shooting them. You don’t have to look very hard to find videos of people hurting themselves by just shooting one of these guns for recreation, which is a pretty big red flag when it comes to something you may have to use in an extremely stressful situation. Other actions, such as reloading, are also complicated by the need to fully support the entire gun’s weight with one hand while keeping it steady enough to load shells into.

Unsurprisingly, I found the PGO configuration distinctly lacking on the range with both buckshot and slugs. I was able to get shots on target at ranges of 15 yards and closer, albeit with a lot less speed and confidence than either stock configuration and shot placement varied wildly. The thing I noticed, though, that really confirmed the pistol grip as being no more than a handicap was that whether firing with the gun at eye level or from chest-level, I really didn’t take up any less space than if I were shouldering a stocked shotgun or firing one from the underarm assault position. At the end of my shooting session with the PGO configuration, it was clear that if I didn’t have the space to fire a stocked shotgun, I wouldn’t have the space to fire a PGO shotgun either.

Magpul is best known for its wide range of AR accessories, but they also produce a stock for both Mossberg and Remington pump shotguns. The SGA stock is a sort of hybrid of the traditional stock and a pistol grip stock. The grip is steeply angled to give the feel of a pistol grip, but it’s positioned closer to the line of the bore and joins the top of the receiver like the grip of a traditional stock. This eliminates the ergonomic issues of not having access to the Mossberg’s safety and slide release while simultaneously granting that carbine-like feel and extra leverage offered by pistol grip stocks. Additionally, the stock is adjustable for length of pull to accommodate different sized shooters and is also adjustable for comb height to allow for good cheek weld even when using optics.

I wasn’t able to run my SGA-equipped 590A1 (which I’ll be reviewing more in-depth later) side-by-side against the Mossberg 500 in the other configurations, but from taking it out afterwards, I can say there are some definite advantages to choosing this stock for your home defense shotgun. The SGA allowed me to get a much shorter length of pull which not only made the gun more comfortable to shoot, but also decreased the overall length to the point that the 20” barreled 590A1 was actually shorter overall than the 18.5” barreled Mossberg 500. I was also able to raise the comb-height in order to get a solid cheek weld when using the attached XS ghost-ring sights or a micro red dot optic.

The only real downside to the SGA stock I found was that it needs some disassembling in order to adjust the length of pull unlike some of the M4 style stocks available. Overall, though, this was a clear favorite for me, and I’ll definitely be putting it through its paces moving forward.

It’s all too easy to go online and pick out something cool looking to slap on your home defense gun and call it good, but working with the different configurations available really opened my eyes to some of the nuances of stock design and the impact those design choices can have on performance. I highly recommend thoroughly handling, or even shooting, a potential defensive shotgun before buying it to make sure that it works for you and anyone else in your home who may need to use it.

Be to let us know what stock you prefer for your defensive shotgun in the comments!

The Remington 870 for Home Defense: Part 2

For anyone considering a shotgun for personal protection inside the home, the Remington 870 is an excellent choice... usually. The viability...