Are Expensive Scopes Really Worth It?

Some of the most widely repeated advice regarding rifle scope buying is to spend as much or more money on the scope as you did on the rifle you wish to put it on. I can’t say I agree that that is always necessary, but I do appreciate and agree with the underlying message; don’t cheap out on your scope!

A bad scope can make an excellent rifle nearly useless while a quality one will allow you to get the most out of whatever rifle it sits on. When you look at today’s flourishing optics market, the temptation to buy a lower cost scope is stronger than ever with many imported optics promising all the features of scopes costing ten times as much.

This begs a very important question; namely, what is it that high-end scopes offer that cheaper alternatives don’t? To help answer this question I hit the range with three different tactical riflescopes and conducted a head-to-head evaluation.

The most expensive of the three scopes was the Nightforce NXS 2.5-10x42mm. This scope features mil turrets, digital reticle illumination, a unique “zero-stop” mechanism, and an advanced proprietary reticle design called the Mil-R reticle. It carries an MSRP of $2000.

Next up we have the Leupold Mark 4 LR/T 3.5-10x40mm. It shares many of the same features as the Nightforce NXS such as an illuminated proprietary mil reticle and parallax adjustment, but adjustments on the Leupold are made using special turrets with markings that match the drop of 168 grain .308 rounds. The MSRP for this particular model is $1689.99.

Lastly, we have our budget scope, a Bushnell Elite 3200 10x40mm. As you might expect, this scope lacks some of the features found on the other two scopes. It does not have an illuminated reticle or a parallax adjustment knob. It is fixed at 10x magnification and uses a basic mildot reticle. The Bushnell 3200 Elite has recently been discontinued, but they can still be found for around $200.

Out of the Box Impressions

After getting all the scopes together I carefully looked each one over in order to see how the three optics differed from one another in terms of parts fit and finish as well as overall scope construction. It’s important to understand that tighter tolerances and better materials mean increased manufacturing cost and that the inclusion of unique features means that the manufacturer has likely spent a significant amount of money on research and development as well.

Unsurprisingly, the Nightforce led the pack in this department, as it should given its higher price tag. The NXS’s mil turrets adjusted easily and securely with very solid mechanical clicks that could be felt even with gloved hands. The markings on both the windage and elevation knobs also lined up perfectly with the index point on the scope body, meaning that there was no question as to how many clicks of adjustment were made.

All moving parts of the scope were well-machined to provide a textured gripping surface, and the scope sported a very durable matte finish. The NXS also sported more features overall, such as red and green push-button illumination seamlessly incorporated into the parallax knob and the proprietary Mil-R reticle and Zero-Stop mechanism.

In second place was the Leupold Mark 4 LR/T. Leupold optics have an excellent reputation for durability and clarity which I can personally attest to, having used some of their products on missions in Afghanistan. However, in this case I was a bit underwhelmed with the fit and function of the elevation and windage turrets. The adjustment clicks were less positive than on the NXS and overall the turret rotation felt a little mushy.

The index mark on the scope body also didn’t quite line up with the markings on the scope turrets. This wasn’t so bad that accurate adjustments weren’t possible, but it’s a little obnoxious for a scope costing this much. The LR/T made up for this somewhat with a great finish, clear markings, a well-designed reticle, and reticle illumination with more brightness settings than offered on the NXS.

In last place was the Japanese-import Bushnell 3200, which really never had a chance of competing with the other two optics in the first place. Unlike the other two scopes it is unable to adjust over a range of magnifications or to correct for parallax at distances other than 100 yards. The green-on-black markings were more difficult to read and the scope is overall very plain in appearance as well as reticle layout.

The finish appears thinner and more reflective than that of the other scopes. Surprisingly, the elevation and windage adjustment clicks were more positive than those on the Leupold LR/T and overall the Bushnell’s turrets felt much less mushy, though it did have a substantial offset between the turret markings and the index line on the scope body. 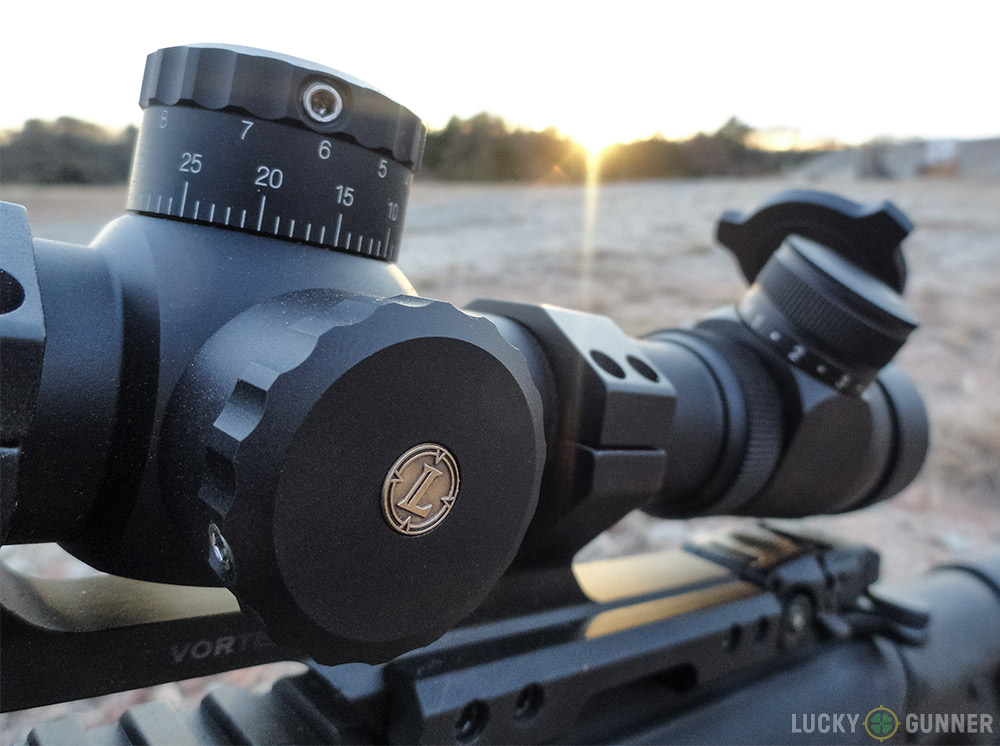 The main factors I was concerned with in terms of scope performance were optical clarity and adjustment accuracy. A good optic should present the brightest and clearest target image possible and also make accurate and consistent adjustments to the reticle. All three scopes were used on the same rifle for their evaluation on the range which consisted of observing and engaging a 12” steel plate at 500 yards to gauge image clarity, as well as a “box drill” to evaluate the accuracy and consistency of elevation and windage adjustments.

The Nightforce NXS and Leupold Mark 4 LR/T came out pretty evenly in terms of clarity. The superb glass used in both scopes made for much greater light transmission that was possible with the Bushnell 3200. My 12” target was clearly visible and defined even under heavy cloud cover which diminished the amount of ambient light. The difference in image clarity between the high-end scopes and the Bushnell actually made it seem like I had a bit more magnification on the NXS and LR/T than I did with the Bushnell. 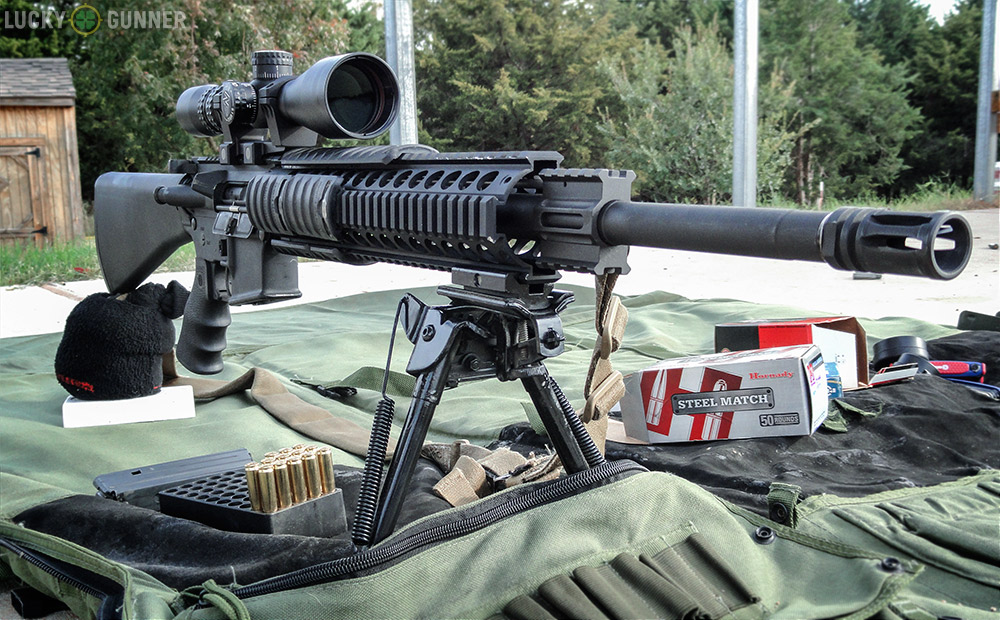 This isn’t to say that the Bushnell was useless, far from it in fact. While the colors weren’t as bright and the edges of objects weren’t as crisp, I was still able to Identify and engage my target consistently with the budget scope. I could envision difficulties arising at longer ranges or different lighting conditions but in all honesty the Bushnell worked okay. 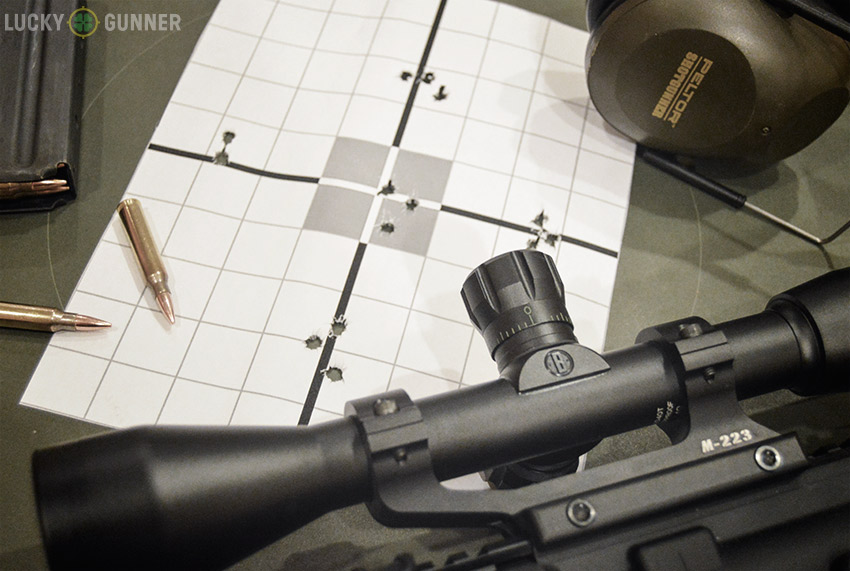 What really surprised me while shooting the three scopes is that in terms of adjustment accuracy and repeatability it was a wash between all three optics. That’s right, there was no discernable difference between the $200 Bushnell and the $2,000 Nighforce in my test. At 100 yards all three scopes produced windage and elevation shifts on paper that were consistent with the impact shift predicted by the adjustment turrets. Furthermore, all three scopes returned right back to zero after being adjusted to the limits of their elevation and windage range.

It’s pretty clear that higher end scopes like the Nightforce NXS and Leupold Mark 4 LR/T are better optics than the much lower-priced imported scopes like the Bushnell 3200, but the question many shooters have is whether the increases in flexibility, clarity, and perhaps durability are really worth the extra money. While I can’t give an objective answer to that, I can say that while the premium scopes offer premium performance, it would seem that you don’t have to empty your bank account to have a perfectly functional optic.

Over the course of creating the last year of content for the Lounge, our online store, and our various social media...