The AK-47 is one hell of a carbine. Robust, reliable, hard-hitting, and quick-shooting, the Avtomat Kalashnikova is a favorite of freedom fighters, villains, soldiers, and firearms enthusiasts alike. One aspect of the rifle rarely praised is its accuracy. While not a match-grade weapon, the AK-47/AKM series of rifles are accurate enough to engage targets reliably at 400 yards. Trained shooters can push that distance even further if they understand the dramatic ballistic arc of the 7.62x39mm round and utilize magnified optics.

Purists will denounce mounting aftermarket optics and accessories on their rifles. “Rifle is fine!” the suit-wearing Eastern-Bloc citizen proclaims on a photoshopped Soviet propaganda poster that has become an internet meme.

Indeed. Rifle is fine, but maybe a better word would be “OK”. “Rifle is OK”, doesn’t have the same ring to it. 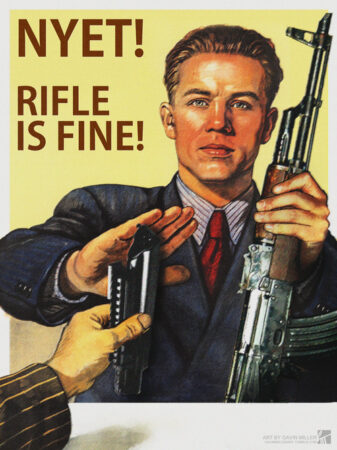 While many seasoned shooters claim optics are a crutch for bad shooters, the reality is that the iron sights on AK rifles are “OK” at best. They hinder most shooters and prevent them from fully realizing their rifle’s potential.

It’s tough to hit what you can’t see. I equate adding optics to an AK as an ergonomic improvement more than simply customizing a rifle for the sake of making it unique.

Modern militaries understand that optical sights are crucial to extending a rifleman’s effective range, and they have modified their designs to incorporate optics accordingly. Unfortunately for civilian AK enthusiasts, the AKM never followed the same upgrade route as the M4 series of rifles after the fall of the Soviet Union, meaning the AKM/AK-74 rifle family never officially integrated a modular accessory system save for a side rail. It can be argued that this is due to equal parts Soviet combat doctrine, the collapse of the Soviet Union, and the subsequent reduction of its armed forces.

The Kalashnikov was designed at a time when optics were a luxury relegated to hunting rifles and snipers. One of the first assault rifles ever fielded, the AK-47 was meant to replace submachine guns and short carbines, effectively serving as a medium to close range weapon. As such, the Kalashnikov was only designed for iron sights.  Later iterations incorporated the now standard side rail, but this was originally for special units armed with night vision sights.

Modern shooters who’ve made the choice to mount optics on their favorite communist carbine will find it’s more difficult than with the über-modular AR15. However, thanks to an increasingly robust aftermarket parts business, mounting much needed optics to AK rifles is easier than ever.

Shooters deciding whether to put magnified optics, reflex sights, or holosights need to identify their needs before making a purchase. Buyers most interested in squeezing every drop of accuracy from their AK rifle will be best served by magnified optics. The downside? They take longer to acquire targets and restrict field of view, which decreases the shooter’s situational awareness.

Additionally, shooters utilizing traditional AKM-pattern rifles, those chambered in 7.62x39mm, will be best served by optics featuring a bullet drop compensator reticle, or BDC. This is because the round has a more drastic ballistic arc than other caliber AKs like 5.45mm and .223.

Thankfully, .300 Blackout has very similar ballistics, so a BDC-equipped scope calibrated to it can be used effectively with 7.62x39mm.

AK owners more concerned with speed than precision should invest in either a reflex or holosight. By staying unmagnified, these optics both offer shooters an wider field of vision and a beacon-like reticle that allows for rapid target acquisition and engagement. The downside is their limited effective range due to their large glowing reticles. These large glowing reticles make distant precision work difficult; they often completely obfuscate the target.

Wherever the reticle or red dot is, your rounds will go. Unlike iron sights, nothing needs to be aligned. If the reticle is visible to the shooter, it is functioning correctly. Magnified optics have eye relief: a range of distances from the shooter’s eye to the optic’s eyepiece where the crosshair and the subject are perfectly clear.  If outside this range, the image distorts or blacks out entirely. Neither holosights nor reflex sights suffer from this, they have “infinite” eye relief.

Which begs the question: what’s the difference between a holosight and a reflex sight?

The details are incredibly dense and unsurprisingly complicated and confusing. Though for most shooters it boils down to reticle types. Reflex sights project a laser dot on the glass of the sight to superimpose an aiming point on a target (hence, “AimPoint”.) Holographic sights do the same thing, but with an image. In the case of the most popular holographic sight maker, EoTech, that image is a hollow crosshair with a dot in the center. Newer models include a bullet drop compensator.

Another thing to keep in mind with holosights is that they are designed for shooters to look through them, not at them. People accustomed to using iron sights will find this very counter-intuitive initially, but with practice, it becomes second nature. The other thing worth noting is that some people have a hard time with either of these reticles if they suffer from an astigmatism. If you have eyesight issues, visit a store and try one out first before buying.

Another aspect that bears mentioning is that both the reflex sight and holographic sight can co-witness with iron sights, meaning the iron sights can be used ‘through’ the reflex sights, allowing the traditional mechanical sights to act as a backup. However, with most AK rifles this isn’t possible because of their low iron sights and relatively high mounting locations. The latter aspect is also responsible for one of the most frustrating aspects of mounting optics on AK rifles: awkward comb height. So some shooters will have to employ chin-weld as opposed to cheek weld to achieve proper sight picture.

Which one is best?

Ultimately, it depends on the shooters need and what sort of optic they decide to go with, though there are some model-specific bests that bear mentioning. Shooters leaning towards reflex sights should utilize as far forward a mount as possible, and thus go with either a railed gas tube or handguard, pairing it with a micro red dot. A good example of this is a Manticore Arms ALFA RAIL Keymod. It allows shooters to mount small red dots very low and forward without adding much weight and providing a mission-adaptable forearm.

One exception is the AimPoint PRO. This 30mm optic should be mounted on the RS Regulate AKM mount, which allows the lowest mounting point possible for it, even allowing iron sights to co- witness. This mount can also be used with magnified optics, but depending on the scope’s size may not offer shooters proper eye relief.

For holosights, the best option is a dog-leg rail as it allows them to be mounted as close to the bore as possible. This is important because most holosights are too tall to be comfortably used on any other mount.

Magnified optics are best on side rail-mounts in general because they offer enough added height for proper clearance of the scope’s objective. The downside is the added weight of a rail, rings, and a scope.

It’s important to note that side rails preclude the use of folding stocks on nearly all AK rifles. Those with reversible folding adapters can fold the opposite way, but factory folders cannot. The only exception are SAM7SF milled AK rifles from Arsenal, which fold to the right.

Choosing a mounting solution for your AK rifle can be a daunting task; there are more varieties of mounts available now than ever. The best piece of advice I have for shooters not yet invested in either an AK or an optic is to try your friend’s guns and their setups before purchasing your own. Also, if you ask a friend to let you shoot their rifle and you blow through hundreds of rounds, buy him some ammo.