The first time I carried a gun in a purse was while I worked in a non-permissive environment. That meant it was not illegal to carry my firearm, but if I was caught, I’d likely be fired even though there was no written weapons policy. The culture was one of anxiety where weapons were concerned.

I’d had a meeting at work and wasn’t confident in my concealment. I didn’t have a good holster system for a Kimber Ultra Carry 1911, and the flimsy pencil skirt I chose that morning was a little too big for me. I put my gun in my purse in the holster I normally carried, careful to place it in its own pocket, and headed to the office. The open floor plan of our desk spaces did not allow me to secure my purse in a room, but I had keys to a locking cabinet and was able to lock my purse away from anyone who might access it… including myself. 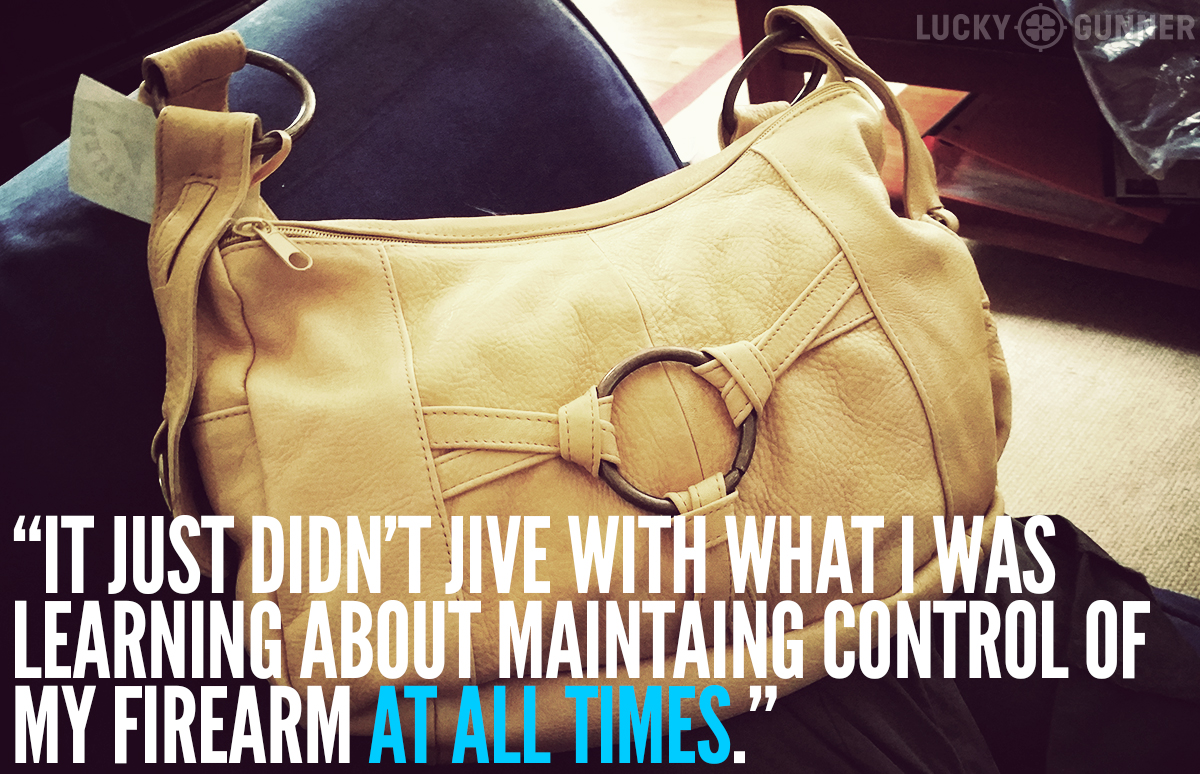 When called into that meeting, I knew that my firearm was secure, but I still felt a little irresponsible knowing that it was locked in a drawer down the hall from me. I contemplated taking my purse with me, but wouldn’t it be awkward to bring a purse into a meeting? What about when I got up to present? Would I hang onto my purse while speaking? Would it be weird to slip it behind the podium or behind me on the floor? It clearly wasn’t secure on the floor, even though the likelihood of a coworker suddenly going through my bag was slim. It just didn’t jive with what I was learning about maintaining control of my firearm at all times.

That day, the desire to find solutions to keep my firearm on my body at all reasonable times was born.

For the most part, I’ve been successful in this. But for the rare occasion of taking possession of my husband’s gun while out and about, or going to a very formal event where I had no on-body options, or a limited time here-or-there while pregnant, in ten years of being armed I have been able to avoid off-body carry.

So when I was asked to give my opinions of purse carry, I felt like I might not be the person to ask. However, I love the challenge of coming up with reasonable carry solutions for everyone, and I fully committed myself to testing purse carry.

This journey started out with me purchasing my first gun purse. I chose a couple of purses, at least one for aesthetics more than function because, let’s face it, most gun purses are ugly as sin. Women who have a sense of style almost always choose form over function. What’s frustrating is that the information on what makes a good purse holster is rather ill-defined, at least from a gun-fighting aspect. The purse descriptions often lack the size of pockets and the length of the zippers or the quality of the holsters inside the bag. Pictures and videos go a long way to demonstrate the features and guns that can fit inside of those bags, but I was a little underwhelmed by the common rhetoric regarding purse holsters in general—reinforced cross-body strap, holster inside gun pocket. That’s about it. Pretty minimal.

How would I know what sizes of guns would make the opening too small for my gun and hand? What if I had a red dot on my gun? Would it fit? Would it get hung up? What kind of liner was in the bag? It’s a lady’s guessing game.

Issues with Everyday Carry With a Purse

When the purses arrived, I was nervous. I fully intended to give purse carry my full and honest attention, but I have three little children who are curious. Carrying a gun in a bag around them would be a huge adjustment and something I considered carefully and did not rush into.

I took to it in stages. Stage one was carrying a dummy gun in the bag and treating it as though it were a real one to assess the areas where I might be at risk for either my children gaining access or for how I might treat a gun bag. 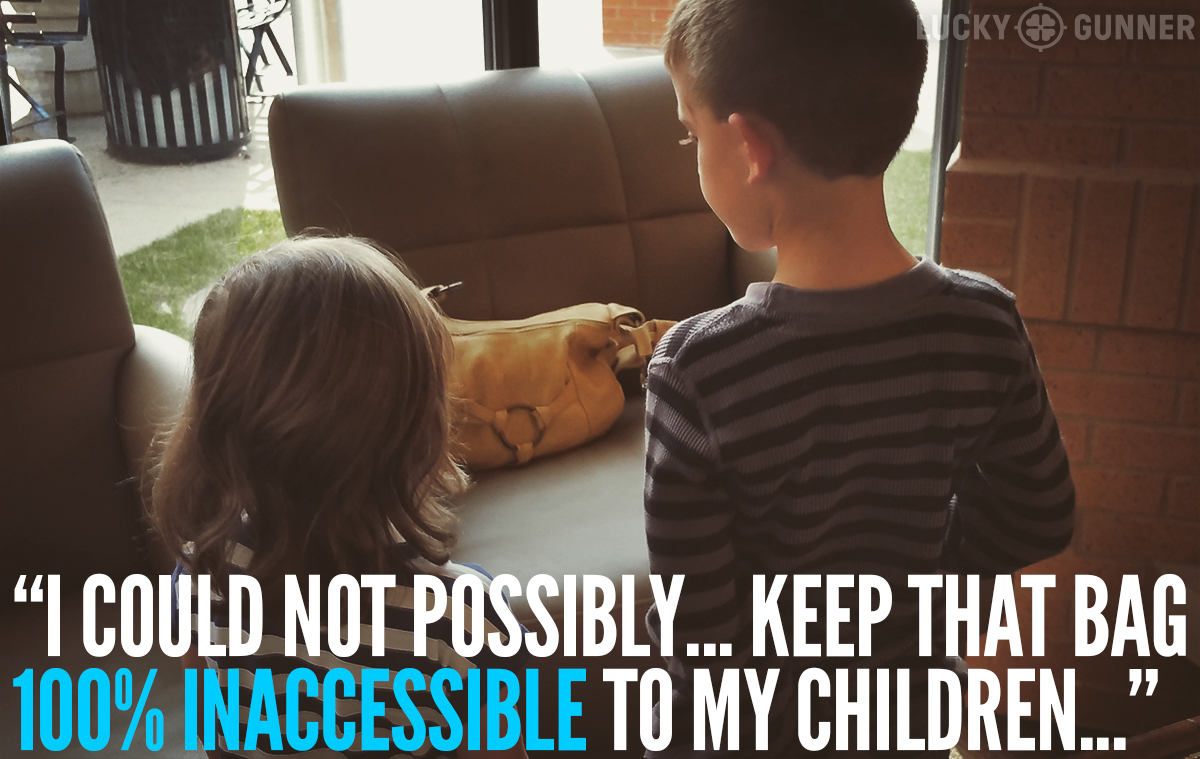 My first day out with the bag was exhausting!

The amount of control and attention I needed to give my bag exasperated me. I couldn’t put it in the cart next to my child at the store or leave it in the booth to go get ketchup or napkins at a restaurant. I needed to have it strapped to my body at all times, and it got heavy and in the way. I found myself wanting to justify leaving the bag unattended under the guise of, “It’s not a real gun.”

When I came home, I found myself wondering the best way to secure my purse from my children. I settled for locking the whole bag up so my children couldn’t access it. This was another step of awareness I needed to add because it meant making sure I didn’t just drop my bag inside the door like I often do with my “regular” purse. Before putting away groceries or even looking at the mail, my first priority was securing my gun purse, rendering it inaccessible to my children but also less accessible to myself if that were my primary means of self-defense.

After I found a decent routine for control and storage, I moved on to stage two, feeling more comfortable switching to a real gun but also more anxious. I continued to carry a firearm on my body because, despite the dry practice with the purse, I did not feel I would be able to access the firearm in my purse fast enough if actually forced to use it. This made me responsible for two firearms out in public.

The carry experiment ended the day my son was able to simply touch the strap of my gun purse while I was sitting next to the bag and was not aware that he was there while turning my attention to answer a phone call.

That he didn’t gain access to the firearm itself was irrelevant in my mind. I, being human, could not possibly maintain the level of awareness needed to keep that bag 100% inaccessible to my children at all times, especially while I was out with three of them and expected to live a normal life. Any risk of them getting their hands on my firearm was unacceptable, and I immediately stopped carrying off-body on a regular basis. While sharing the experience with Kathy Jackson she said to me, “Purse carry is an alternative to regular carry because most people can maintain the focus necessary to keep it secure for a short time. When it becomes a regular practice, people tend to relax and it becomes potentially dangerous.”

I agreed, and determined if I were to purse carry again, it would be limited to short periods of time and never around my children. While carrying it on-body, no one can touch my firearm without my knowing about it. My decision to not carry off-body around my children protects them from the humanity of their mother and their own curiosity.

Testing at the Range

I wasn’t done with purse carry yet, however. It was time to test its validity from a self-defense perspective.

A plea to my respectable list of qualified Facebook friends and an almost miraculous turn of luck landed me on the range with seven throw-away purses, six boxes of ammo, five guns, four shooting instructors, three hours, and two cell phone cameras (I couldn’t find a partridge in a pear tree).

I couldn’t have asked for better people to help with my testing, either. My husband, John Lauer, has been an NRA instructor for almost seven years and an IDPA match director for three. He’s a master at running a safe range, setting up safe shooting environments, and keeping everything on schedule. I was also privileged to have The She Shepherd, an assistant instructor from Minnesota, come down with more purses and her own knowledge on off-body carry. John Johnston, the host of Ballistic Radio, was also in town teaching a brief shotgun overview and was gracious enough to stay an extra day to lend me his experience in product testing and ballistics. In other words, we didn’t have a group of slouches on the range. All of us had extensive handgun training as well as training in unconventional techniques like point shooting, retention shooting, and unsighted fire. 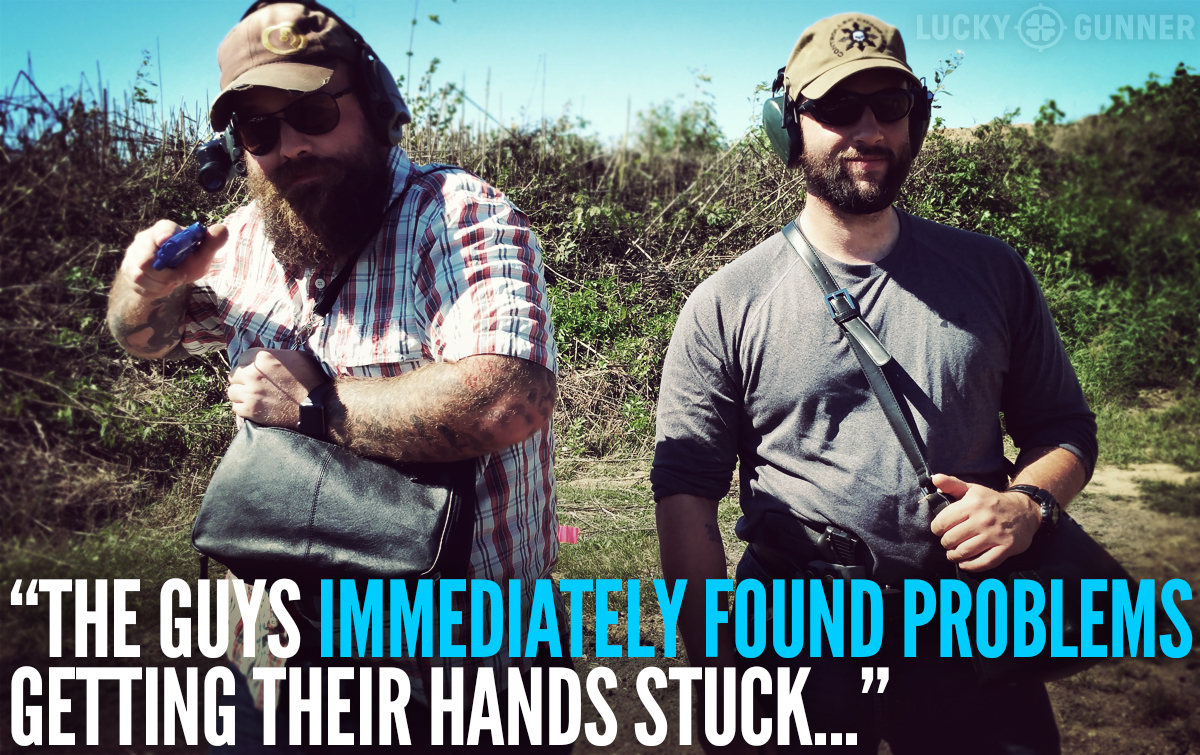 To begin, we went over the principles of a safe draw from a purse and allowed everyone adequate time to work the draw with dummy guns. The She Shepherd and I were more experienced with purse draws, but the guys picked up on the technique quickly and were able to work it effectively. I was thrilled to have two men helping because their hand sizes would represent the potential issues that women with larger hands might have. The guys immediately found problems getting their hands stuck in smaller bags despite using the smallest guns. The solution was to look for larger bags with more generous pocket sizes for their hands and guns.

We had a variety of purse holsters available, and no matter the advantages we chose for ourselves, the fastest draw from the purse for the entire day was 2.72 seconds. With semi-autos, we averaged a 4.71 second draw to first shot. The ergonomics of the revolver bought a little speed which allowed us to cut our average draw time down to 4 seconds even. 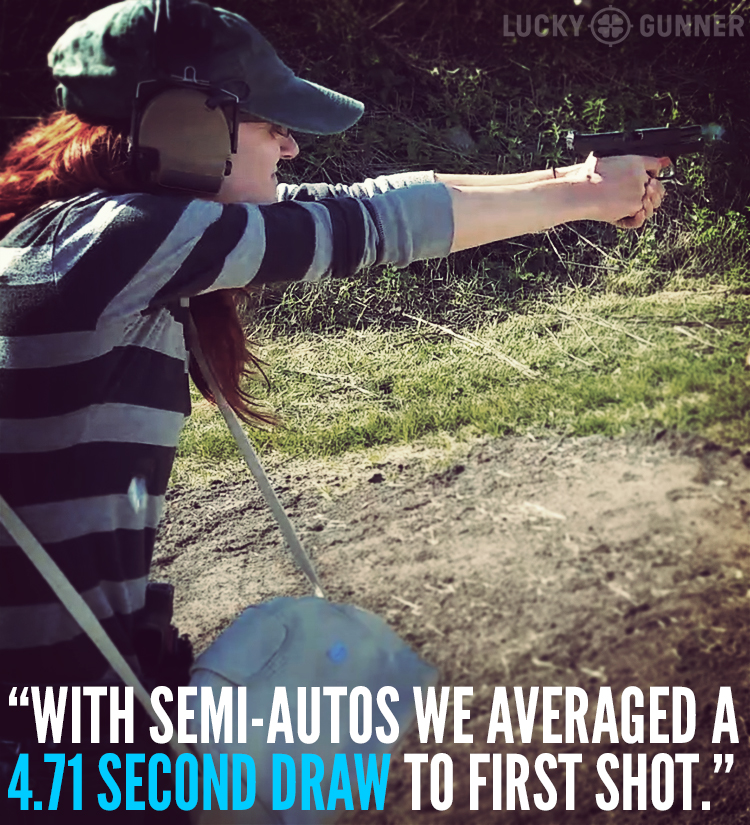 My James Bond secret-ninja-hidden-gun purse let me down by being the only purse we did not achieve live-fire draw times from due to safety issues. The Velcro was difficult to rip open quickly, it would hang up, and holding the pocket open was forcing even those of us with extensive gun handling to potentially sweep ourselves too often. No one wanted to risk a bullet just to get a fast time out of a purse holster.

Either way, the relatively slow draw times were a stark contrast to the draw times we were able to achieve from waistband-mounted holsters. On average, we were able to get accurate shots on target in less than 2 seconds, effectively halving our draw-to-shot times. The fastest draw from the body of the day was less than a second (.98, to be exact) from concealment.

It was clear to all of us that drawing from the purse was the slower technique.

There’s no doubt that we would have been able to get our times down with further practice as I’m sure the dedicated amongst purse carriers are also able to do. I fear, however, that our draw times will remain an optimistic average among purse carriers due to the inability of purse carriers to obtain training specific to their needs or practice live-fire on firing ranges.

By now it should be clear that I’m not the biggest fan of carrying a handgun in a purse, but there’s still one more aspect to cover: shooting through the purse. Check out part 2 and find out how this often-recommended technique worked out in our range tests!

How to Shoot Small Pistols Better

The problem is as old as the concept of concealable personal firearms: The smaller a handgun is, the more difficult...