A while back, Chris talked about how to choose your self-defense ammunition, and he brought up the idea of rotating self-defense ammo in carry weapons — the practice of periodically replacing the ammo loaded in your defensive firearms with new rounds. Since then, I have thought about this quite a lot and wanted to tackle the topic in a little more detail.

As he mentioned, premium self-defense ammunition is expensive and certain loads can be hard to come by. Unfortunately, it’s far from ideal to buy just enough to load up a couple of mags and call it a day. As Chris also pointed out, you should get enough to run some accuracy and reliability tests and still have plenty left over to occasionally replace the ammo after it’s been loaded for a while. So how often is often enough? How often should you replace that $20 to $30-worth of ammunition for fresh rounds?

Consider the Type of Gun

First, are you carrying a semi-auto pistol or a revolver? This might sound like an arbitrary distinction, but in an attempt to isolate every variable, we need to answer this question. With a revolver, your rounds are dropped smoothly into the chamber. Every surface of the ammunition, save the face of the bullet, is protected, and there is no high-impact insertion into the chamber. Additionally, the process of “press-checking” a revolver (swinging the cylinder open to verify its condition) imparts no additional stress on individual cartridges.

On the other hand, autoloading pistols have a tendency to beat the daylights out of the first couple of rounds in the magazine. When the gun is loaded, the first round is slammed rather violently into the chamber. The second round is subject to the slide’s movement over its case, and if you load and unload frequently, these two probably get cycled in and out of the chamber more than once.

The “revolver or auto” question also pertains to any spare ammunition you carry. With extra mags for a semi-auto, all of the ammunition in the magazine is protected by the magazine body with the exception of the first round. If, like me, you carry a revolver, things are a bit different. I carry spare rounds in a Bianchi Speed Strip in my back pocket. After a month or two, the rounds on this strip are discolored and usually one or two of the cases is at least a little dented. If you carry speedloaders in belt holders (or magazines in magazine pouches), the ammo will probably not age as quickly, but can still eventually encounter issues from exposure moisture and debris.

Consider How it is Used

The next question you should be asking is, “How do I use the gun?” Is the gun a nightstand pistol that rarely leaves the bedside table? Is it a daily carry gun? Do you load and unload it daily? Do you press-check it frequently? Your answers here may dictate how often you should rotate your ammunition. If the gun never leaves the bedside, the ammunition could probably last pretty much indefinitely. Because it is not exposed to sweat, humidity, temperature fluctuation, and daily handling, the ammunition should last much longer than ammunition in a carry gun. If you are like me and you check the condition of your firearm every time you put it into the holster, the ammunition in it can become a little worn and should be replaced more frequently.

Inspection Considerations: What To Look For

You should inspect your ammunition occasionally. When I pull the rounds out of my gun, I am looking for some specific indicators that it should be replaced. First, I’m going to look at the bullet itself. Some discoloration from handling is normal, but alterations in the shape of the bullet are not. Did it get slammed into the feed ramp and is now misshapen as a result? This is probably a good indicator that the whole cartridge has suffered some abuse, and the change in shape may impact the bullet’s performance. If the bullet is deformed, replace those rounds. 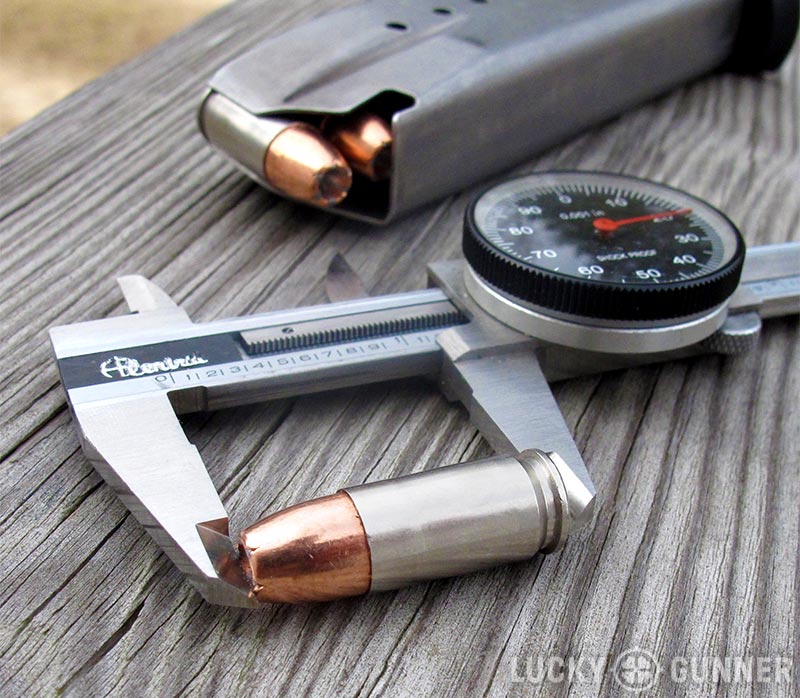 Next, you should look at the position of the bullet in the case. A condition called “bullet setback” can occur when pressure is repeatedly applied to the bullet – from chambering and rechambering – and forces it backward into the case. This can compress the powder and create dangerously high chamber pressures, and ammunition exhibiting bullet setback should not be fired under any circumstances (please note the scary bold type). Because a few 1000ths of an inch can make a difference, this inspection shouldn’t be eyeballed. Instead, use calipers. Measure the first couple of rounds in the gun for overall length. Compare this length with a measured overall length from an unhandled cartridge directly from the box. You can also compare your results with manufacturer specs online if you can find them. If the bullet is set back, replace those rounds, and do not fire them.

Next, you should inspect the case. Non-nickel plated brass cases may be discolored. Some mild discoloration isn’t reason to remove them from duty, but corrosion is. Take a look at the rounds in the photo below. I purchased both of those boxes of Cor-Bon ammo circa 2001. I would carry the ammo in the box on the right, but I wouldn’t trust the really nasty stuff on the left. 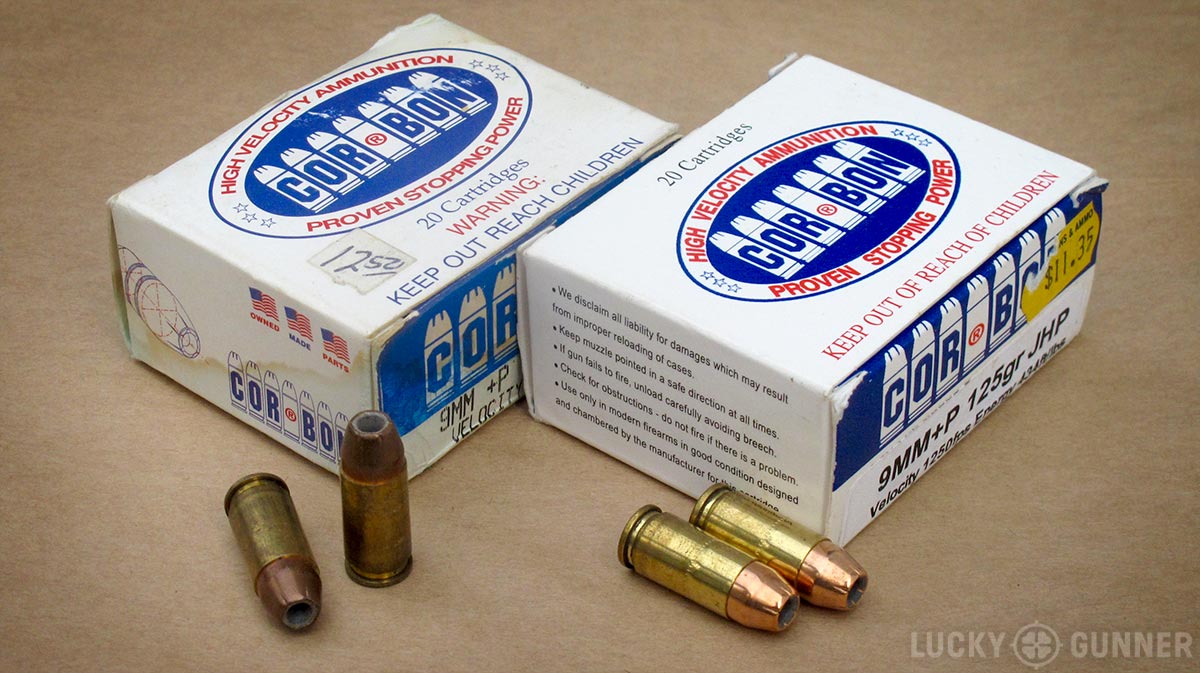 Next, I inspect for deformities, especially the kind that would prevent the round from feeding reliably. These include dents or slight bulges in the case or deformities around the case mouth. I find this to be most common with revolver cartridges carried in reloading strips. I carry these in my back pocket, so each time I sit they are liable to impact with whatever I am sitting on. If cases are badly corroded or deformed, get rid of them.

Ammunition may also experience extraordinary trauma that disqualifies it from carry suitability. On the extreme end of the spectrum, I recently ran a Speed Strip and four 135-grain Gold Dots through the washer and dryer. This wasn’t some ammo torture test, just the result of my forgetfulness in cleaning out my pockets before doing laundry. The ammo came out looking squeaky clean (and it worked just fine), but there’s no way I would trust my life to it. As a less extreme example, I’ve fallen into a creek and briefly submerged my revolver. Most high-quality ammunition is manufactured to be waterproof. If I have plenty of carry ammunition in reserve, I may change it out just to be safe, but if I’m also comfortable carrying those same rounds for a while longer. If your ammunition has experienced some extreme trauma, swap it out.

How Often Do I Rotate?

I reached out to several big-name ammunition manufacturers while conducting research for this article, and the only specific guidance I got was this: you should rotate your duty ammunition every six months. I think this is a great guideline, but it’s still only a guideline. If you handle your gun a lot and load/unload often, you should change your ammunition more often. If your gun is a pure home-defense tool that doesn’t get cycled that much and rarely leaves a climate-controlled environment, you can safely extend that number to a year or more.

Even though I only own revolvers these days, I rotate my self-defense ammunition every 90 days. This is because I am inherently a “gun guy” and tinker with my gun a lot. I shoot it and dry practice often which means my guns get unloaded and reloaded frequently. My guns also get cleaned regularly which means my carry ammunition is in constant contact with oil, a notoriously effective primer-killer. Do you own assessment and consider your own use-case. And, when in doubt, inspect your ammunition and see if it’s time to change it out.

Extend the Life of Your Carry Ammo

You can take steps to extend the service life of your chosen carry ammunition. The most effective measure you can take is to limit the number of times an individual round has been chambered, ejected, and re-chambered. Many concealed carriers remove their gun at the end of the day, and all of us take it off before bed.  Most of us also probably unload the handgun as part of this process and reload it again in the morning. If you store your carry gun in a safe or another type of locked container, you may consider taking the gun and holster off as one, monolithic unit and leaving the magazine and chambered round in place. Then you can put the whole rig in the safe instead of unloading and storing it in pieces. This cuts down dramatically on the number of times rounds are cycled through the chambering process.

Of course, there are occasions when you will have to unload the chambered round, like when dry practicing, prepping for a range session, or getting the gun ready for longer-term storage. The best strategy here is to occasionally rotate the position of those rounds in your magazine to avoid wear on any single cartridge. If you do find yourself loading and unloading frequently, take a couple minutes once a month to unload the magazine and cycle those first few rounds to the bottom. This helps ensure that any single round doesn’t suffer an undue amount of abuse. If your gun holds 10 rounds, this simple step can reduce wear and tear on an individual cartridge by 80%. If you carry something with more capacity, you’ve just created an even greater margin for error.

What do I do with the ammunition that comes out of the rotation? I shoot it. There is some value here, other than just an expensive range session. When I change the ammunition out, I go to the range and run a “cold bore” drill. I will usually set up a drill that requires a presentation from the holster followed by a full cylinder, all on the clock. Firing in my exact carry setup – including ammunition – gives me a really good indicator that my setup is actually working for me. It also gives me confidence in my ammunition. The ammo that ran through the washer and dryer? I shot that, and it worked, which makes me very confident that a quick splash in a creek or getting caught in a downpour isn’t going to ruin my carry ammo.

I admit this does cost a little money. I fire 10 rounds every three months, totaling 40 rounds per year. This means that a 100-round supply of carry ammunition should last me roughly two and a half years. Though it hurts to see my precious supply of premium ammo go down by 10 rounds, it’s cheap insurance. For me, it’s totally worth it for the peace of mind in knowing that my ammunition will work when it has to.