Out of all the ammo we ran through our recent .38 Special and .357 Magnum ballistic gel tests, most of the loads that performed well were magnum loads. As I’ve explained in past articles, ballistic gel testing is just one of many factors to consider when you are choosing your self-defense ammo and with revolver ammo in particular, another major issue to think about is recoil.

The impact recoil has on our shooting varies depending on the severity of the recoil and other factors like the weight of the gun, and the physiology and experience level of the shooter. I made the video below to show one way to determine the balance between recoil and effectiveness, or you can skip the video and read most of the same information in an elegant prose form.

There is a cost for getting that superior bullet penetration and expansion we see with the magnum loads, and the price has to be paid in recoil. A lot of people seem to think that recoil management is simply a matter of pain tolerance. Well, you can grit your teeth and shoot your way through the discomfort, but you can’t defy the laws of physics. At some point, the recoil and muzzle flip and muzzle blast are going to have an adverse effect on your ability to hit the target.

So the question is, “Where do we draw the line?” How much recoil is so much that it is no longer worth the potential gain in ballistic effectiveness?

It’s going to be a little different for everybody, and to find out where that threshold is for me, I decided to shoot a quick test using four different loads and three different revolvers. The revolvers were different sizes and weights and the four loads ranged from a light-recoiling standard pressure .38 to a high-velocity magnum. Each gun and ammo combination delivered a different amount of felt recoil. The lightest revolver was the 17-ounce Ruger LCR 357. The two heavier guns were the same ones used in our gelatin tests: the 23-ounce steel-frame Kimber K6s snub nose and the full size 38-ounce Ruger GP100 Match Champion.

The test I chose is the Hardwired Tactical Snubby Super Test. It consists of 3-stages and 15 rounds using a B-8 bullseye repair center target. It’s a good test of accuracy with realistic distances and time limits. Here’s the course of fire:

The starting position is low ready for all stages, but if you want to try the Advanced Snubby Super Test, you would draw from a concealed holster (additional details on running the test are on the Hardwired Tactical Facebook page. Greg Ellifritz has also helpfully re-published the details on his blog for you non-Facebook users). 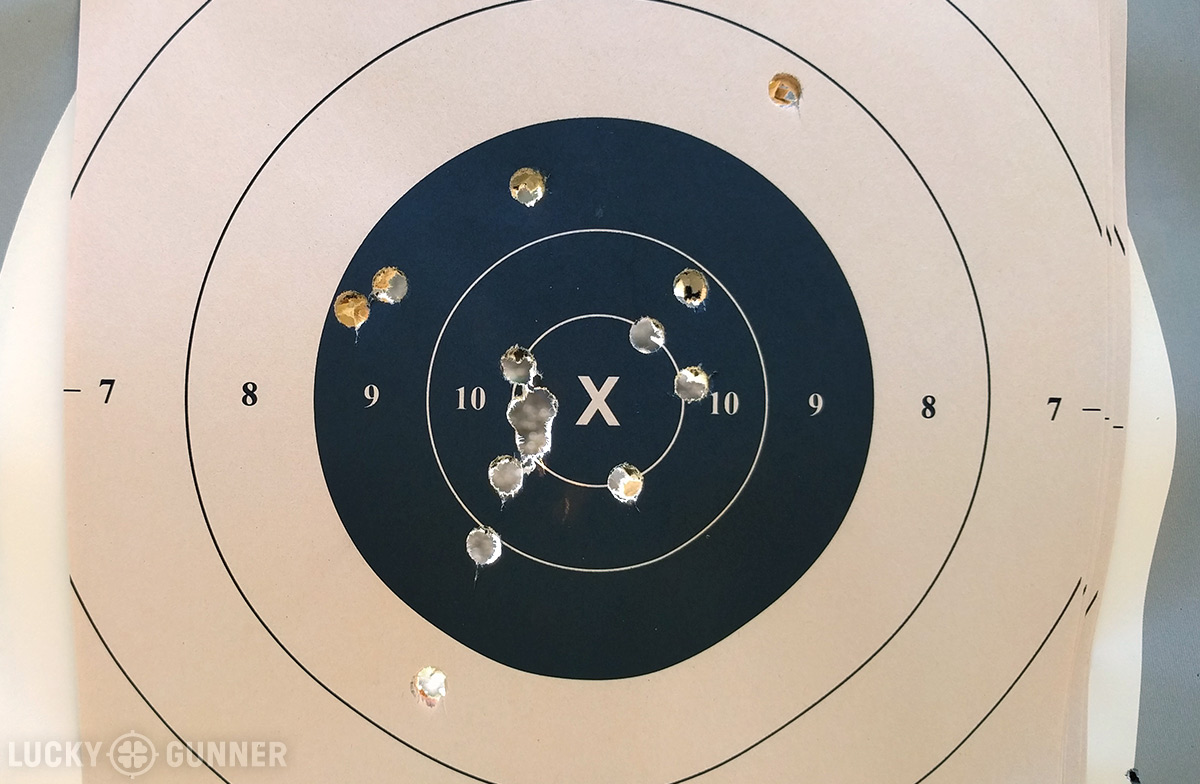 The bullseye target is scored as marked. Any shots off the target or fired after the par time receive zero points. The maximum possible score is 150 points. Here are my results:

The first load was the .38 Special Winchester Wadcutter. It has extremely light recoil, it’s very easy to shoot, and I had no problem getting good scores with all three guns. And I should point out here, it’s really not fair to shoot a snubby test with a full-size revolver, but I ran it with the GP100 just this once, for the sake of comparison. The standard Hardwired Revolver Super Test is normally better suited for testing your skills with a full size revolver.

Moving on to the .38 +P Golden Saber, there was a little more recoil, but not much change in the scores. Then I shot the .357 Magnum Golden Saber which is pretty mild for a magnum load, but it has significantly more recoil than the +P. My scores were holding steady with the two steel guns, but starting to slip with the LCR.

Then finally, I shot the Barnes Tac-XPD, which is a more stout magnum load with enough recoil to put a dent in my scores with the other two guns. I actually didn’t run this load through the LCR because I don’t get paid enough to do that. I have fired full power magnums through the LCR in the past and it’s not an experience I care to repeat. You can just assume my score on the snubby test would have been poor.

None of these scores were actually all that bad for this particular drill, but based on this test, I will continue to stick with +P ammo or wadcutters on the occasions when I carry the LCR. If I were to use a heavier steel frame revolver for carry or home defense, I might consider loading it with lighter magnums.

I was at the range the other day with Justin Carroll, a contributor to the Lounge and author of the excellent Revolver Guy blog. He was kind enough to humor me and run four similar .38/.357 loads through the Snubby Super Test with his S&W 640 Pro J-frame and full size 4-inch S&W 686. His results were nearly identical to mine with the GP100 and K6s. There was little change in his scores until firing the full power magnum load, which led to a slight drop with the 686 and a more significant decrease with the snubby.

Something that both Justin and I noticed that doesn’t really show up in the numbers is that with each gun, as the recoil increased, we had to put more conscious effort into recoil management. Normally, you can counteract recoil with a good grip technique. If the gun fits you correctly and you’re holding it right and you apply enough grip pressure, the muzzle should snap back onto target after every shot with no conscious thought. Recoil management happens automatically, and you can focus your attention on what’s happening in front of you instead of on running the gun.

“Loading up that revolver with hyper-velocity he-man ammo might give me a slight edge in a fight, but I think there is much greater advantage to using lower recoil ammo that allows me to have better control over the gun.”

But if the recoil is severe enough, for me, it feels more like I’m fighting the gun I have to actually think about how to shoot. Where did my front sight go? Why is the gun shifting in my hand? And that’s under ideal conditions, on a nice day, on a flat range with ear and eye protection — that kind of recoil is enough to slow me down and cause me to start missing.

Loading up that revolver with hyper-velocity he-man ammo might give me a slight edge in a fight, but I think there is much greater advantage to using lower recoil ammo that allows me to have better control over the gun. Maybe the ballistic performance is just “okay” but I have the peace of mind that if everything goes South and I end up half-conscious, on my back, firing that snub nose left handed, the recoil and muzzle blast is not going to further hurt my chances of hitting my target.

So before you decide to carry a magnum load in your defensive revolver, I would encourage you to get out the targets and a timer or a stopwatch and find out just how much the recoil affects your performance. You might be surprised by the results.

Cartridge of the Century Part 2: .38 Special, The Golden Years

When last we left the biography of the .38 Special, it was the 1980s, and this cartridge was still going...