.357 Sig has a lot of devoted fans, but just as many shooters seem to have a hard time understanding what makes this cartridge special. Today, we’re looking at how the results from our recent .357 Sig ballistic gel test measure up to the alternatives as we consider the pros and cons of this niche caliber.

Watch the video below for details, or just scroll down and read the full transcript.

Due to popular demand, we have added nine different loads of .357 Sig to our ongoing ballistic gelatin test project. As always, you can see the full details and test results on our interactive chart at Lucky Gunner Labs.

Any time we test a new caliber, I like to do some background research on it. So a couple of weeks ago, I was reading an article published back in the Fall of 2000 by Dr. Gary Roberts, who is probably the most well-known wound ballistics researcher active today. He was sharing the results of a .357 Sig gelatin test he performed at the California Highway Patrol Academy range. This was printed in the Wound Ballistics Review, which was a scientific journal intended for hardcore ballistics nerds, so it tends to be pretty dry and technical most of the time. But at the end of this one article, Dr. Roberts breaks into editorial mode and he says,

“Compared to a 9mm, the .357 Sig has a decreased magazine capacity, more recoil, as well as greater muzzle blast and flash, yet at best it offers no gain in bullet penetration and expansion characteristics. What is the point of this cartridge?”

He’s not the first person to ask that question. And today, I want to consider some possible answers. Is there any advantage to using .357 Sig when we take into account what 9mm is capable of with modern bullet technology?

Let’s start with a closer look at some of our gel test data. Out of the nine loads tested, we saw more or less ideal performance with six of those. All six were 125-grain bullets with very good expansion and penetration depth in the 12-18” range right where we want it. This is not bad at all, but let’s look at how it compares to a few of the best of the 9mm loads that we’ve tested in the past. Just like Dr. Roberts found in his test 18 years ago, what we’re seeing in gelatin with a clothing barrier is pretty much the same between these two calibers. 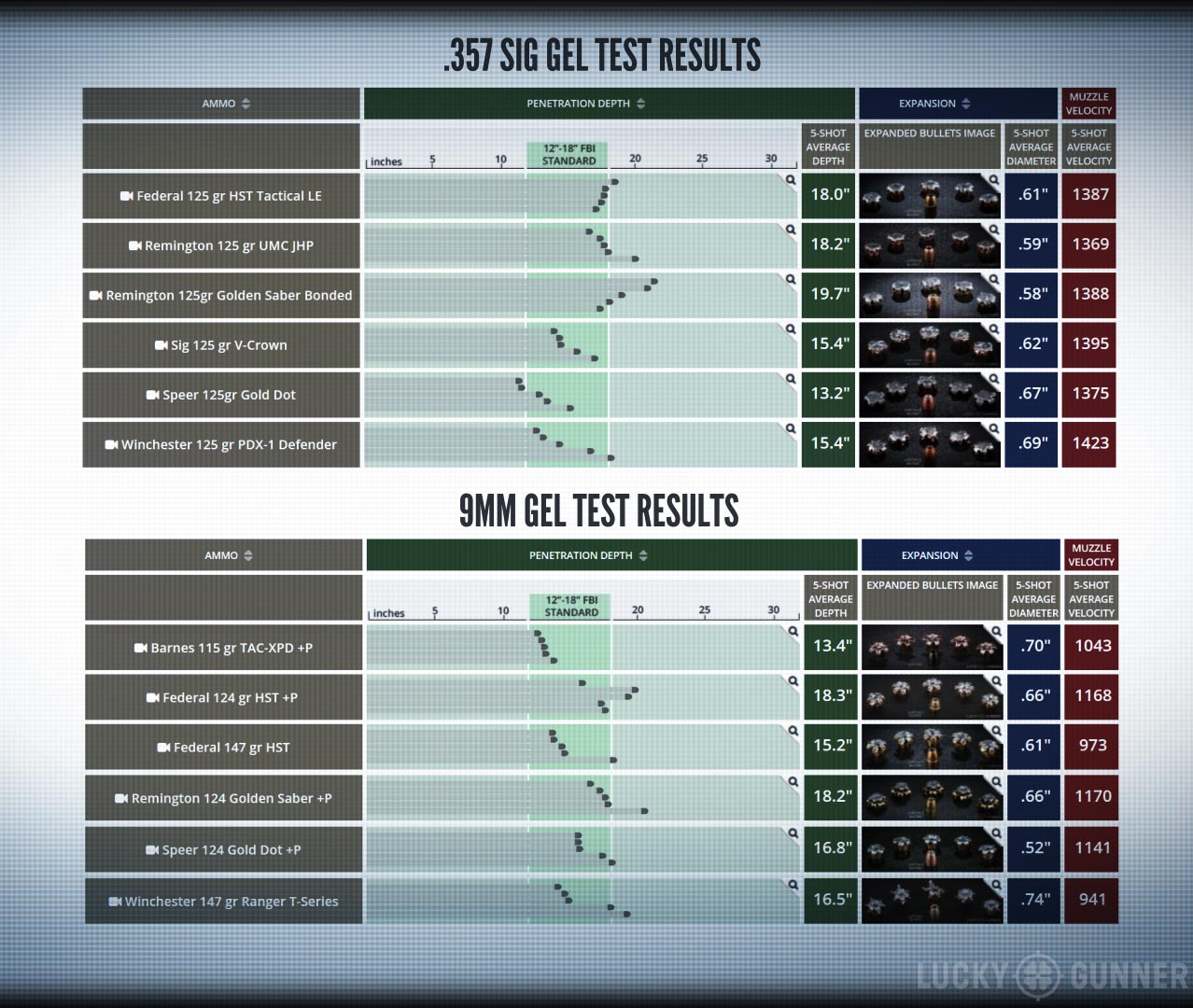 So if there’s an advantage to .357 Sig, it’s probably not something that will show up in our gelatin test. And that’s kind of a pattern I’ve noticed with this caliber. In testing and on paper, it doesn’t really stand out as anything special, but it also has some serious fans among people who have actually had to use it for its intended purpose.

Originally, .357 Sig was developed as a law enforcement round in a joint effort between Sig Sauer and Federal. The idea was to recreate the ballistics of the 125-grain .357 magnum in a semi-auto cartridge. They basically shortened a 10mm case and necked it down to take a 9mm diameter bullet. But rather than using pre-existing bullet designs, .357 Sig hollow points are typically 125 grain bullets that are specially designed to expand at the higher velocities this cartridges generates. Out of a service size pistol, that’s usually between 1350-1450 feet per second which is around 200 feet per second faster than a 9mm +P with a similar bullet weight.

When this cartridge first hit shelves in 1994, it was adopted by a handful of high profile police departments and federal agencies and it had some modest commercial success as well. It has never seen the kind of popularity achieved by the .40 S&W cartridge that came out four years prior, but the agencies that adopted .357 Sig all seemed to be very happy with its performance in the field. 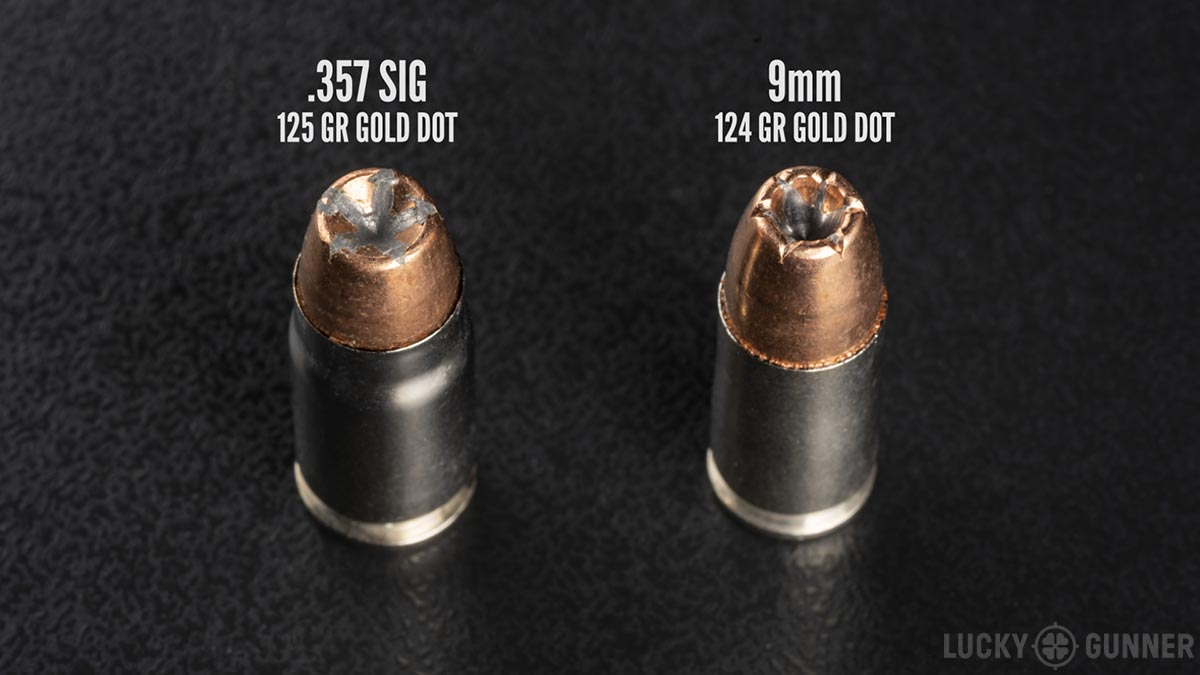 What they have typically not been as happy about is the toll this cartridge takes on their firearms. It’s a very high pressure round, even compared to .40 S&W. It’s hard on guns and it makes them wear out quicker. But it does tend to have slightly less recoil than a .40 and a lot less recoil than a 4-inch .357 magnum revolver. On the other hand, like Dr. Roberts mentioned, it’s got far more recoil than a 9mm along with a lot of muzzle blast and muzzle flash. It takes more effort and practice to shoot this caliber well. There’s also the practical issue of feeding the gun; these days, .357 Sig practice ammo is about twice the cost of 9mm and around 50% more than .40 S&W. On the plus side, a lot of pistols chambered for .40 S&W can be converted to .357 Sig just by swapping out the barrel. So you have the option of doing most of your practice with .40, and using .357 Sig sparingly without a lot of up-front cost.

Accuracy might be the one big advantage this cartridge has over most other semi-autos. At short range, it tends to have better than average accuracy, and at extended distances like 100 yards or more, the extra velocity gives it a flatter trajectory, which makes it easier to get hits than with a typical pistol caliber.

There has been speculation that the extra velocity also helps with hard barrier penetration. That’s not something we’ve tested, but according to Dr. Roberts, both his tests and tests conducted by the FBI showed almost identical performance between 9mm and .357 Sig when shooting through all types of barriers including steel panels, windshield glass, and plywood.

But again, if you listen to anecdotal reports from officer-involved shootings, there are a lot of guys who have been very impressed with this round. It has a reputation that exceeds what we can see in the test data. One theory for this discrepancy is that gel tests don’t show us the full effects of kinetic energy transfer or the temporary stretch cavity. But just like I talked about a few weeks ago with our 10mm tests, handguns generally don’t have enough velocity for that to be a factor. The evidence gathered by coroners and surgeons and other people who study actual gunshot wounds all seems to point to the idea that a handgun can only cause physical incapacitation when it pokes holes in vital internal structures directly. 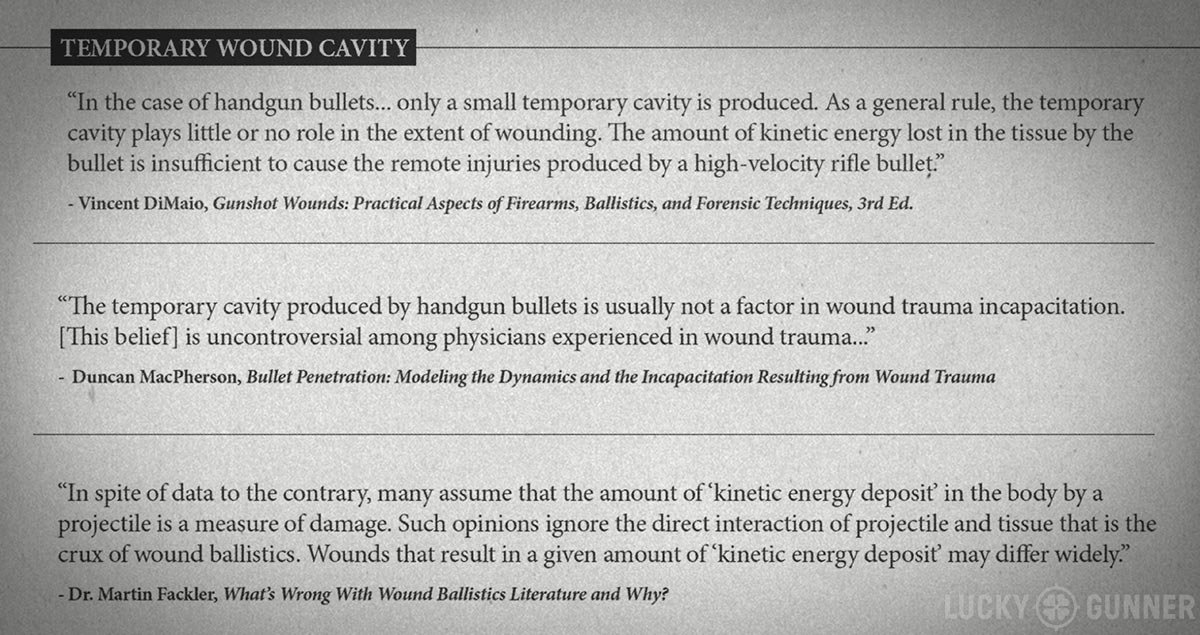 So I think the explanation lies elsewhere for why .357 Sig has the reputation it does. I’m not qualified to start inventing ballistic theories of my own, but based on what I know of human nature, I believe it’s at least possible that there is some confirmation bias going on. It could be that in a shooting where .357 Sig was used, a 9mm would have been just as effective, but if the person who fired the shot has been led to believe that .357 Sig is a superior round, then he’s more likely to attribute his success to the caliber rather than other factors.

There’s also a good chance that some of these shootings were psychological stops. That’s where the person stops fighting, but not because their body has physically stopped working. They either decide to stop voluntarily because they don’t like being shot, or they could have an involuntary psychological reaction — sometimes people will react like they’ve received a serious incapacitating wound even when they have not.

There’s some historical evidence that psychological stops are at least partly responsible for the reputation .357 magnum earned back when cops carried revolvers. I know one retired officer who has said that in his department, it was a lot more common for a guy to drop after just one shot when the shooting was in really close quarters in low light. Under those conditions, the bright muzzle flash and the muzzle blast from the .357 magnum loads they were using often had a powerful psychological impact that he compared to the effects of a miniature flash bang grenade. That can be disorienting and maybe even demoralizing to someone who’s not expecting it. There’s been some speculation that the extra noise and flash from .357 Sig could have similar psychological effects. It’s definitely not something that could be relied on to work every time, but I wouldn’t be too quick to dismiss it as a potential benefit, either. 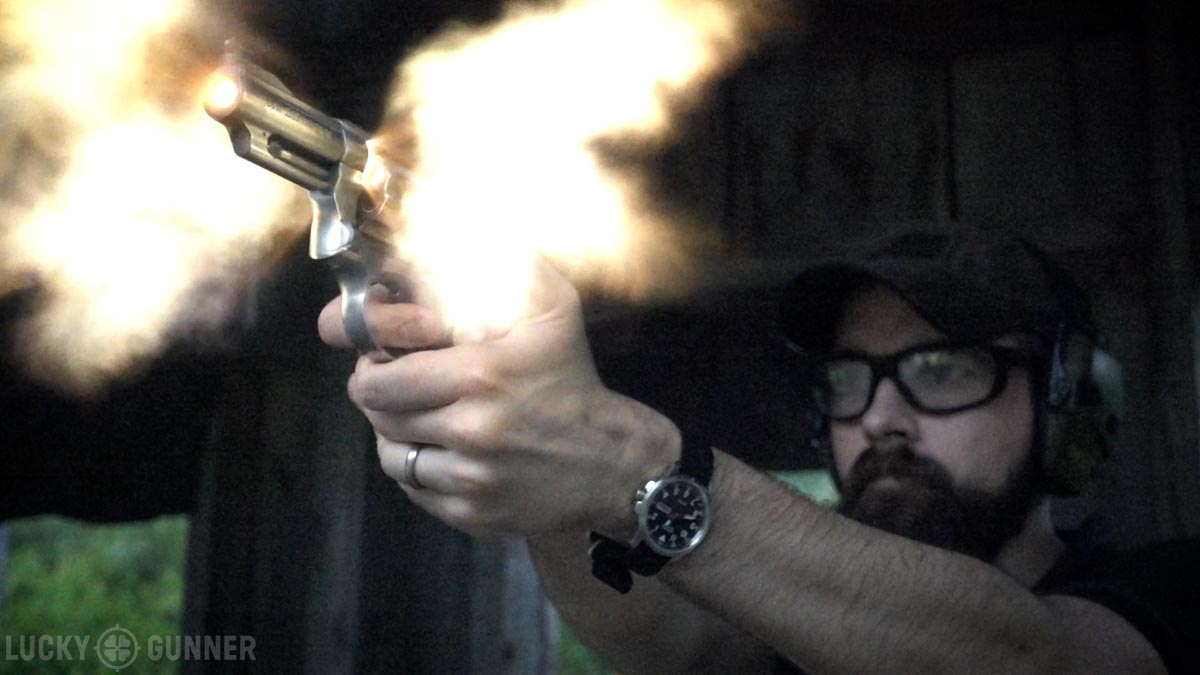 So, to answer the original question, there really is not a whole lot this cartridge can do that can’t be accomplished with a 9mm and I would not recommend .357 Sig for the average private citizen for personal protection. But if you don’t mind the extra cost and your recoil management skills are up to par, it is a capable cartridge that comes with a couple of side benefits.