Within just the last few years, 1 3/4″ mini shotgun shells have gone from quirky novelty status to an ammo option that firearm and shotshell makers seem to be taking seriously. Mini shells offer reduced recoil and increased ammo capacity — ideal features for a lot of shotgun users.

But are these pint-sized 12 gauge loads just as effective as the standard 2 3/4″ shells? Or is there some kind of tradeoff?

We measured and tested four different mini-shells to find out their muzzle velocity, how they pattern at home defense distances, and their performance in ballistic gelatin.

Details are in the video below, or scroll on down to read the full transcript.

Hey everybody, I am Chris Baker from LuckyGunner.com and today I’m going to talk about mini shotgun shells and whether they are viable for self-defense. Standard 12 gauge shotgun shells are 2 ¾ inches long. Mini-shells are 1 ¾ inches. They started out as kind of a novelty product a few years back, but a lot of shooters saw the potential for self-defense applications, and the ammo market has responded accordingly. Mini-shell buckshot and slugs allow you to fit more shells in your tube fed shotgun and most of them also have reduced recoil even compared to the lightest 2 ¾-inch shells.

Mini shells were initially advertised for use only in breech-loading shotguns because they don’t typically feed reliably in pumps and not at all in semi-autos. Some pump actions handle them better than others. They tend to do okay if you run the action slowly and deliberately, and keep the gun perfectly upright. The problem is that there’s enough room inside the action for a mini shell or a spent mini hull to rattle around and cause a stoppage. You can run into some weird double feeds and other issues that rarely happen with 2 ¾-inch shells.

But a couple of years ago, a company called OpSol started making this inexpensive little adapter. You just slip it right into the loading port of a Mossberg 500 or 590-pattern shotgun. It takes up that extra space that the mini shells don’t need and drastically improves reliability. The only real downside is that if you want to use 2 ¾-inch or larger shells, you have to remove the adapter.

Then, last year, Mossberg released the 590S. This is a standard 12 gauge Mossberg 590, except it’s got some minor changes to the action to make it compatible with mini shells. Unlike the Opsol adapter, the 590S can feed mini-shells or 2 ¾-inch or 3-inch shells without making any changes to the gun. This version of the 590S has a plain bead sight and an 18-inch barrel. Mossberg says the six-shot tube will hold nine mini shells, but we actually got 10 to fit in there. They also make a 20-inch version with choke tubes and ghost ring sights – that one holds 13 mini shells. There’s a 590S Shockwave as well with an 8+1 capacity with mini shells. 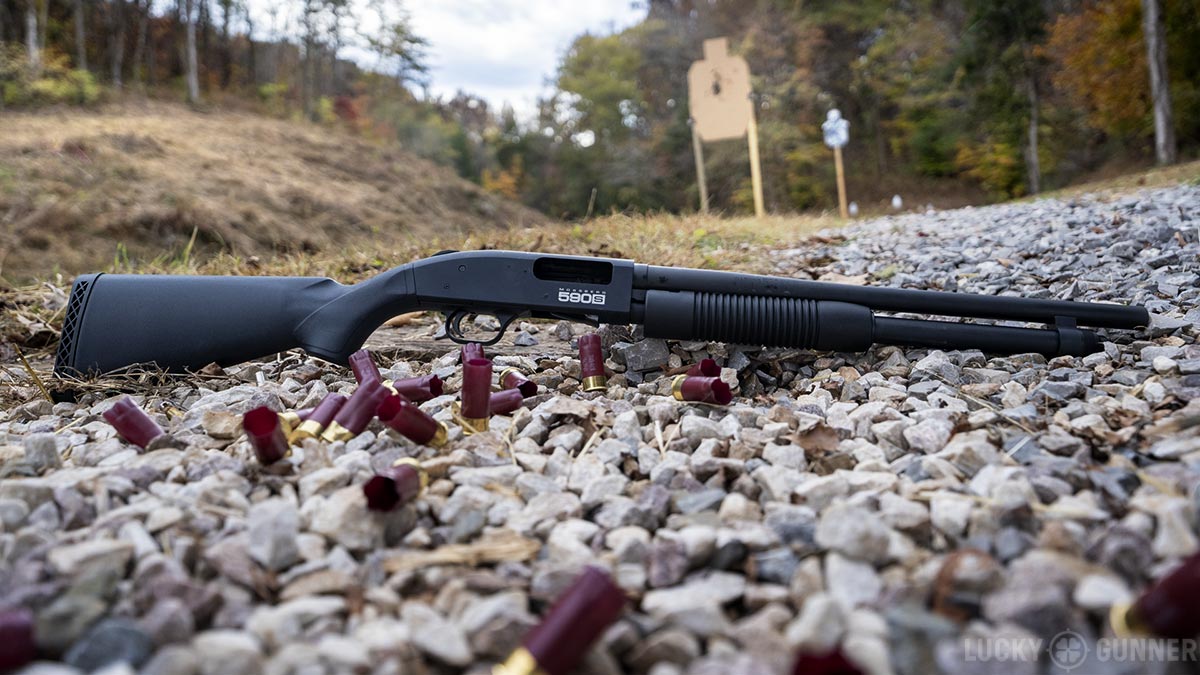 So now we’ve got multiple options for setting up a solid home-defense shotgun that can also reliably feed mini-shells. That means we should probably look at the mini-shells themselves to see if they’re up to the task.

We have four options to consider. The first is a mini buckshot load from Aguila. It’s got seven #4 pellets and four #1 pellets. The other three loads are all from Federal – they call them “Shorty Shells.” We’ve got a #4 buckshot with 15 pellets, a one-ounce slug, and a #00 buckshot with six pellets. That #00 load uses Federal’s Force X2 pellet which is designed to split in half on impact.

For each of these loads, we measured velocity, we patterned them, and we fired them into ballistic gelatin. Our test gun was the Mossberg 590S. We also took some velocity measurements with the Shockwave but they were nearly identical to what we got with the 18-inch 590S. So there shouldn’t be any major difference in ballistic performance.

First, let’s look at patterning with the three buckshot loads. Buckshot that spreads too much is a major liability for home defense. Opinions vary on how much spread is too much. Personally, I’ve got kids and pets in my home and neighbors nearby, so I like to play it safe – a fist-sized or smaller pattern is what I consider ideal. At the maximum possible firing distance in my house, a hand-width spread would probably be okay. For most homes, that maximum range will be somewhere between about 5 and 15 yards, so we pattern these loads and 5, 10, and 15. We fired two rounds at each distance and measured the pattern at its widest point.

As you might expect, they all gave us nice tight patterns at five yards. 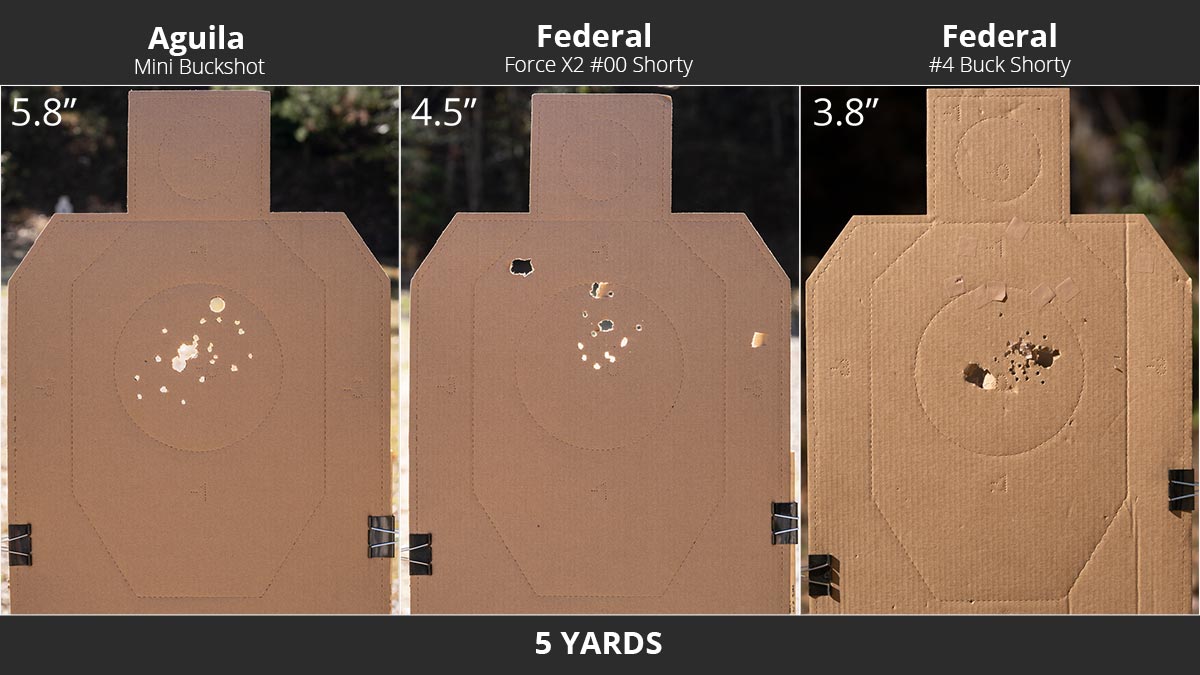 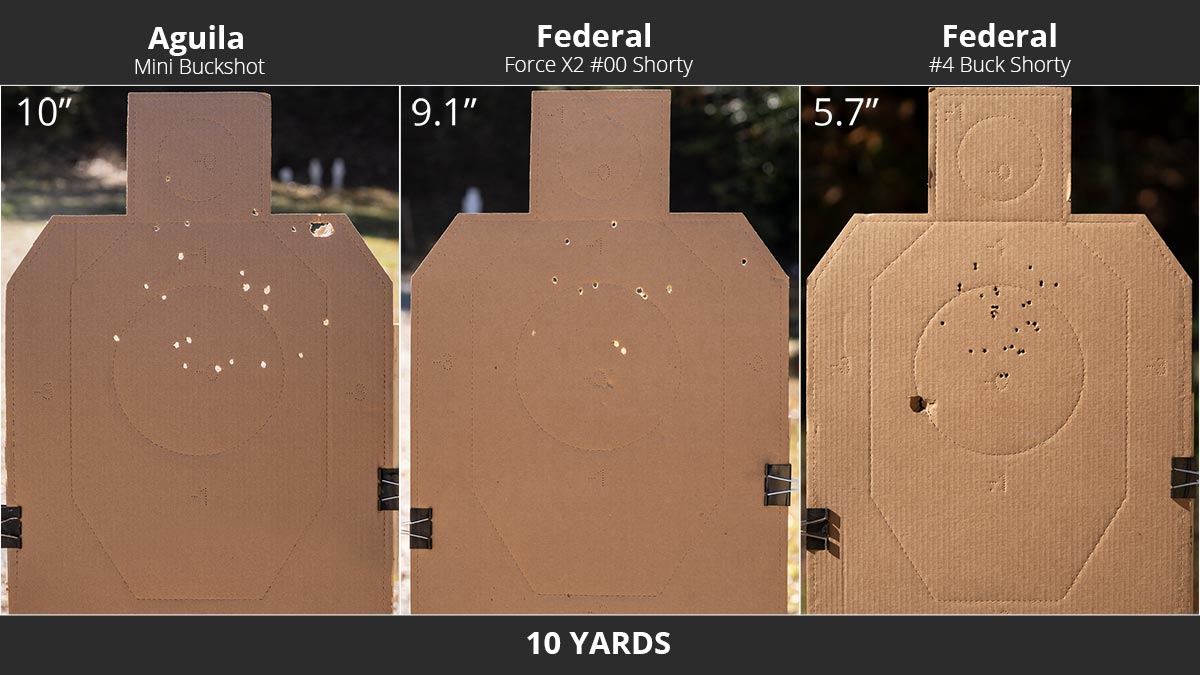 Moving out to 15, all three are giving us a pretty wide pattern. Keep in mind, each individual shotgun barrel patterns a little differently. But 12 to 15 inches of spread at 15 yards is very wide by any standard. 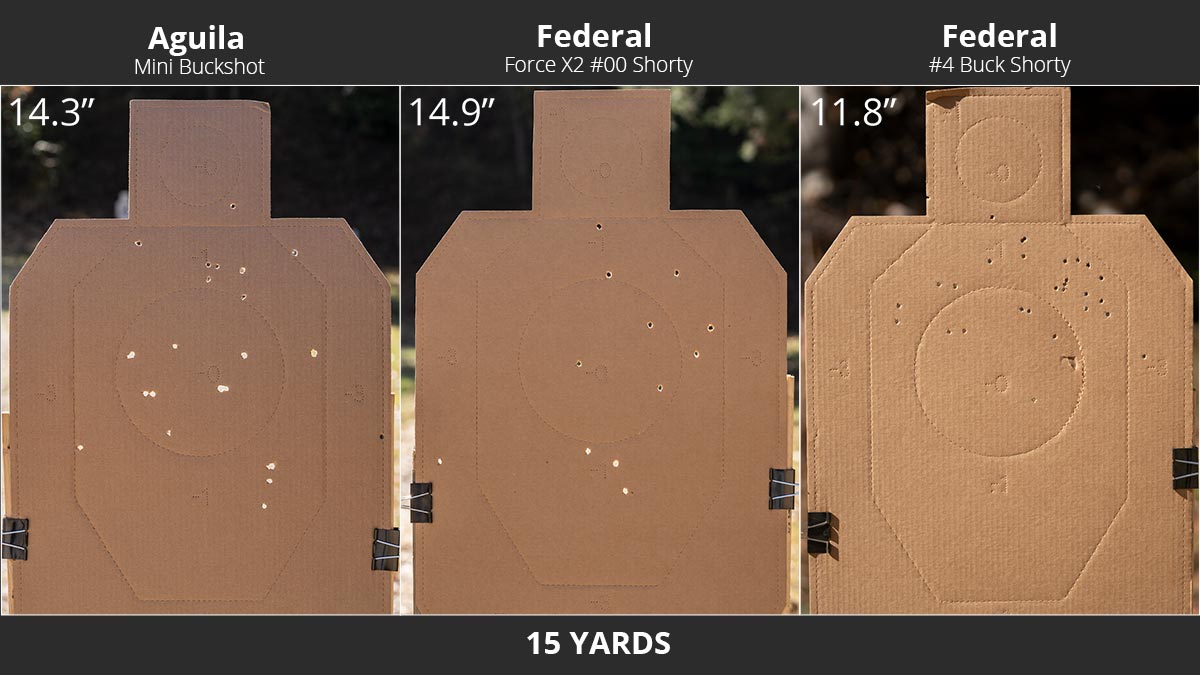 So before we even got to the velocity and terminal ballistics, I was not super impressed with the performance of these mini-buckshot shells. Those patterns might be fine depending on your application – especially the #4 Federal. But there’s obviously room for improvement.

The Aguila buckshot averaged 1129 feet per second on our chronograph. That’s comparable to a low recoil 2 ¾-inch buckshot load. But the combined mass of the pellets in the Aguila mini shell is about half that of a standard shell. That means the felt recoil was significantly lighter. 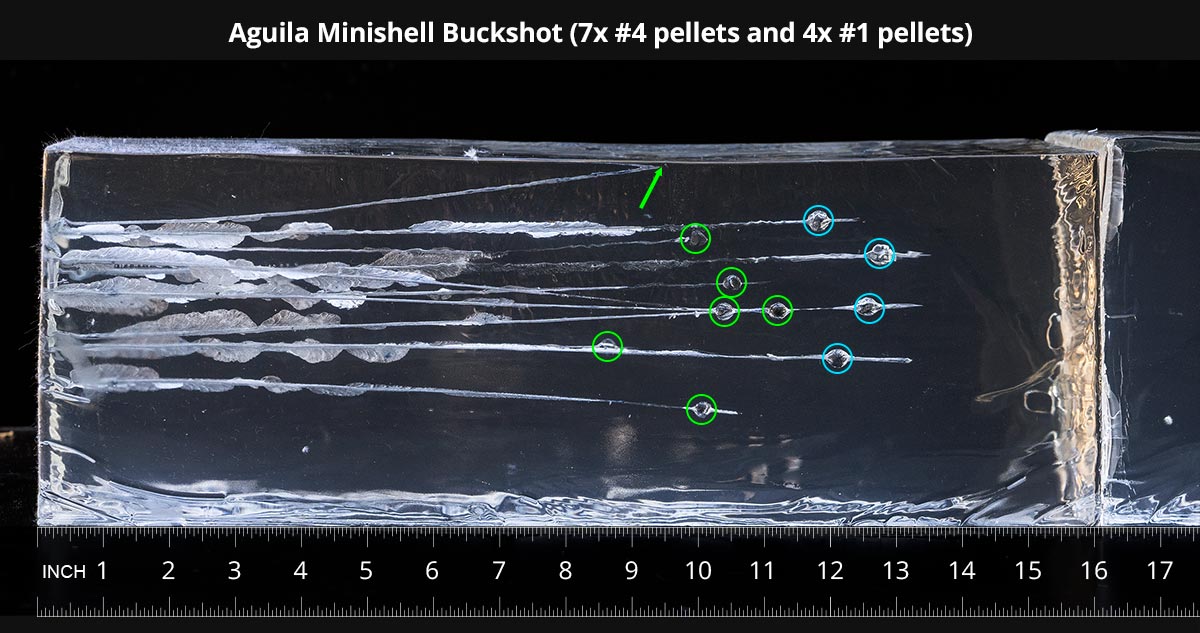 That low recoil comes with a trade-off. Penetration depth in the gel was between 8.5 and 13 inches. There’s a distinct difference in what the #4 pellets did compared to the #1 pellets in that load. We lost one of the #4s when it curved and exited the top of the gel block. The other #4 pellets settled between 8.5 and 11.5 inches. That’s not too surprising for #4 buck – it’s often considered right on the edge of being acceptable for self-defense. The #1 pellets went a little deeper. They were right there at 11.5 to 13 inches. So overall, not exactly impressive, but maybe not bad if you’re concerned about overpenetration in a high liability environment like an apartment building.

The Federal #4 Mini-shell with 15 pellets clocked in at 1187 feet per second. For comparison, Federal’s 2 ¾-inch #4 Personal Defense load has 34 pellets advertised at 1100 feet per second. That load is fairly stout, recoil-wise. But with only 44% of the mass, the mini-shell version is super easy to shoot. 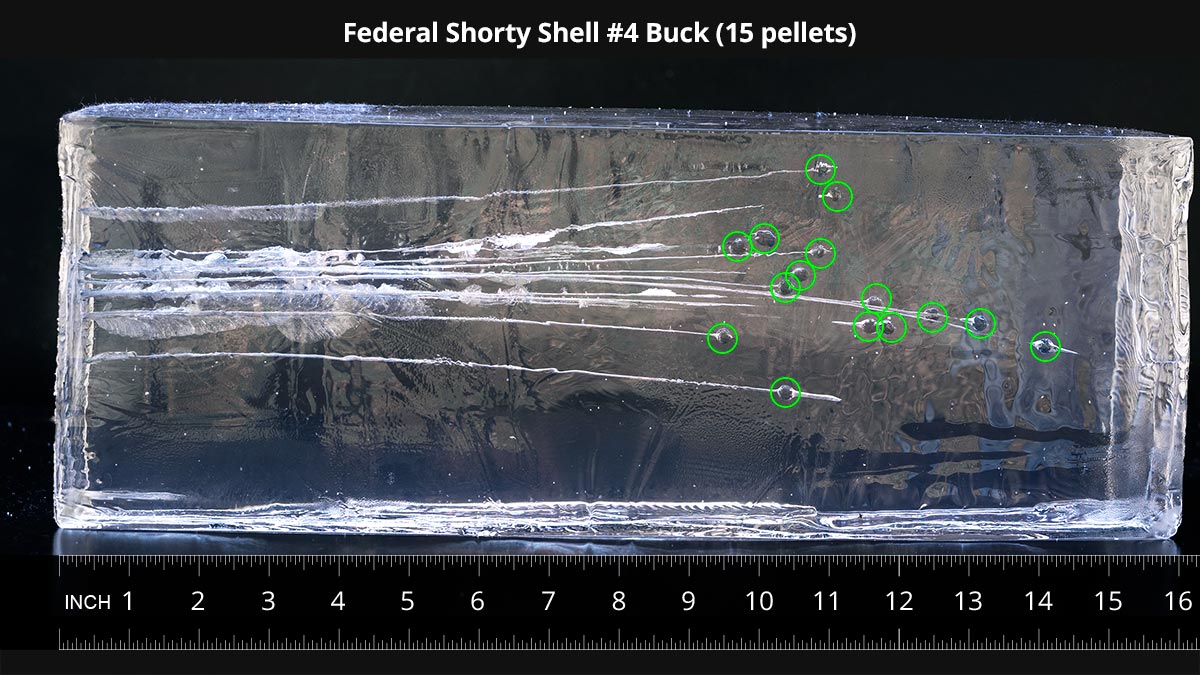 In the gel, penetration was between about 9.5 and nearly 15 inches. Six out of the 15 pellets went deeper than 11.5 inches, the rest were fairly shallow. Like I said before, #4 is kinda iffy. Depending on who you ask, it’s either unacceptable for self-defense or barely acceptable. And that’s when it’s in a full size load with 30 or more pellets.

Going back to our patterning, at 10 yards or less, we’ve got all 15 pellets hitting roughly the same area at the same time. That might still get us that trademark “one-shot stop” effect that shotguns are known for. When the pattern spreads at longer range, each of those little #4 pellets is going to be a lot less effective by itself.

The Federal Force X2 buckshot seemed the most promising to me. You typically get 8 or 9 pellets with a standard #00 shell. Six pellets is still not bad, if they penetrate enough. Velocity was 1195 feet per second. Pretty close to our other options so far. And like the other two loads, recoil was very soft. 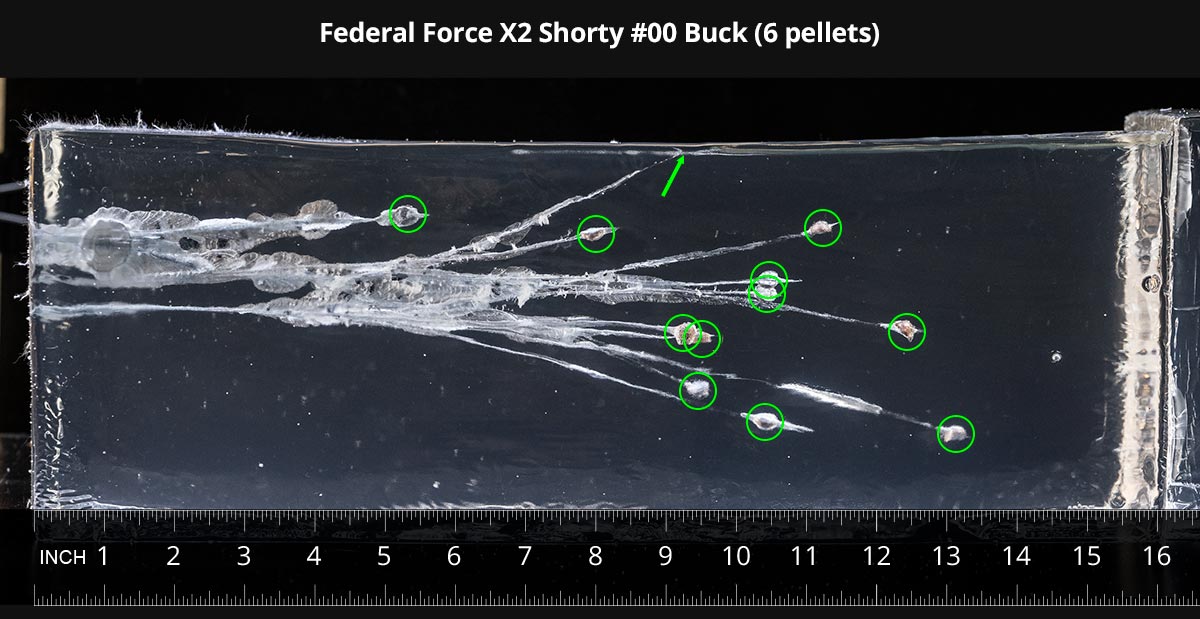 In the gelatin, these pellets did exactly what they were designed to do. They split in half and spread out. But that really limited their penetration potential. When the pellet’s mass is cut in half, it doesn’t have the momentum to go as far. We lost one fragment out of the top of the block. A couple other fragments made it past the 12-inch mark. But the majority of them stopped between 9 and 11 inches.

Most #00 loads travel 20 inches or more in gelatin. That’s actually more penetration than we really need. But 9-11 inches is definitely on the shallow side for a defensive buckshot. I really wish Federal had just made this load with standard #00 pellets. The Force X2 load is plated and buffered with a shot cup, which is a nice start. They just need to top it off with a non-split #00 or #1 buckshot. And if they really want the shotgun nerds to get excited about mini shells, they could add a FliteControl wad.

Anyway, let’s move on to the Federal Shorty Slug. It’s a one-ounce slug moving at 1141 feet per second. That is right around the same velocity as some of the low recoil 2 ¾-inch slugs on the market. But, unlike we saw with the buckshot, the slug itself is not any lighter. One ounce slugs are pretty standard. That means these mini slugs have about the same recoil as a 2 ¾-inch low recoil shell. It’s not a punishing load to shoot by any means. It’s just not abnormally soft shooting like the three mini buckshot loads.

In the gelatin, the slug pushed all the way to the 25-inch mark. Again, that’s more penetration than we need for defense against human predators, but it’ll certainly get the job done. Some slugs are made to fragment or deform to limit their penetration. That doesn’t seem to be the case here.

So What’s the Verdict?

So let’s go back to our original question. Are mini shells viable for self-defense? Sure, I think any of them will work. The more important question is: “what trade-offs are we making and are they worthwhile?”

Mini slugs give us performance and felt recoil we can already get from standard shells, so the only real benefit there is increased ammo capacity. Mini buckshot also gives us more capacity and with less recoil than we can get from any standard size shell. But the current options all have borderline terminal performance and shot patterns that leave a lot to be desired.

The primary benefit of using a shotgun for personal protection is that they stop threats quickly and definitively. Since we know that conflicts with shotguns rarely involve more than one or two shells fired, why would I want to give up some of that effectiveness for more ammo capacity?

The reduced recoil is nice. The mini shells are definitely a lot of fun to shoot. They could be a useful teaching tool for a shotgun novice. But recoil aside, pump action shotguns are still difficult to master. They lead to more user-induced malfunctions than any other modern firearm. For someone who is recoil sensitive, something like a pistol caliber carbine would be much easier to learn and use under stress.

So overall, I think the mini shotgun shells are not quite ripe for serious use yet. The slugs have potential if you just really want that extra capacity and you’re not after the super light recoil. The buckshot could be great with some minor tweaks. And hopefully in the future, we’ll see more support on the firearm side. I’d love a reliable semi-auto designed around low recoil mini-shells. Somebody make it happen. In the meantime, if you need some ammo, be sure to get it from us with lightning fast shipping from LuckyGunner.com.

Stuff You Should Know About Buckshot [Part 1]

More Stuff You Should Know About Buckshot [Part 2]