Today, we’re going back to basics. We get a lot of ammo-related questions from new shooters and first-time gun owners. We’ve answered a lot of this basic info in passing in other videos, but we thought it would be helpful to put it all in one place. To keep it streamlined, we left out a lot of details that probably aren’t important for most shooters right away. This guide should cover everything you need to know before you buy your first box of practice ammo.

If you’re looking for more introductory-level info, you might want to check out our Shooting 101 series.

Hey everybody, I’m Chris Baker from LuckyGunner.com where you can order ammo with lightning-fast shipping. We’ve been hearing from a ton of first-time gun owners who have questions about ammo and what kind they should buy. If you’re in that crowd, I want to walk you through that today. Handgun ammo will be the focus, but most of this applies to rifle ammo as well.

I’ll use this box of Blazer Ammunition for my example because it’s pretty typical for a box of pistol ammo. Every company labels their boxes a little differently. Sometimes the info you’re looking for is right on the front. If not, it is almost always on the flap at either end of the box. You’ll also find this information on every product page on our website. 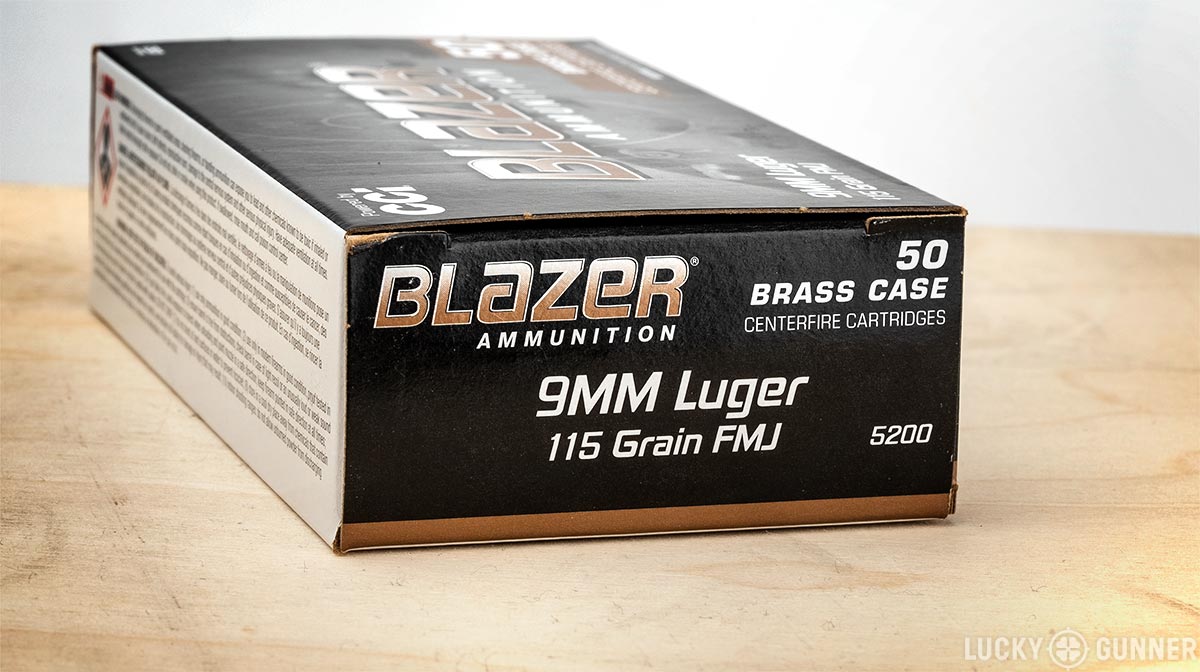 Parts of a Cartridge

First, let’s go over some basic terminology. This is a cartridge or a round of ammo. It’s made up of four parts. 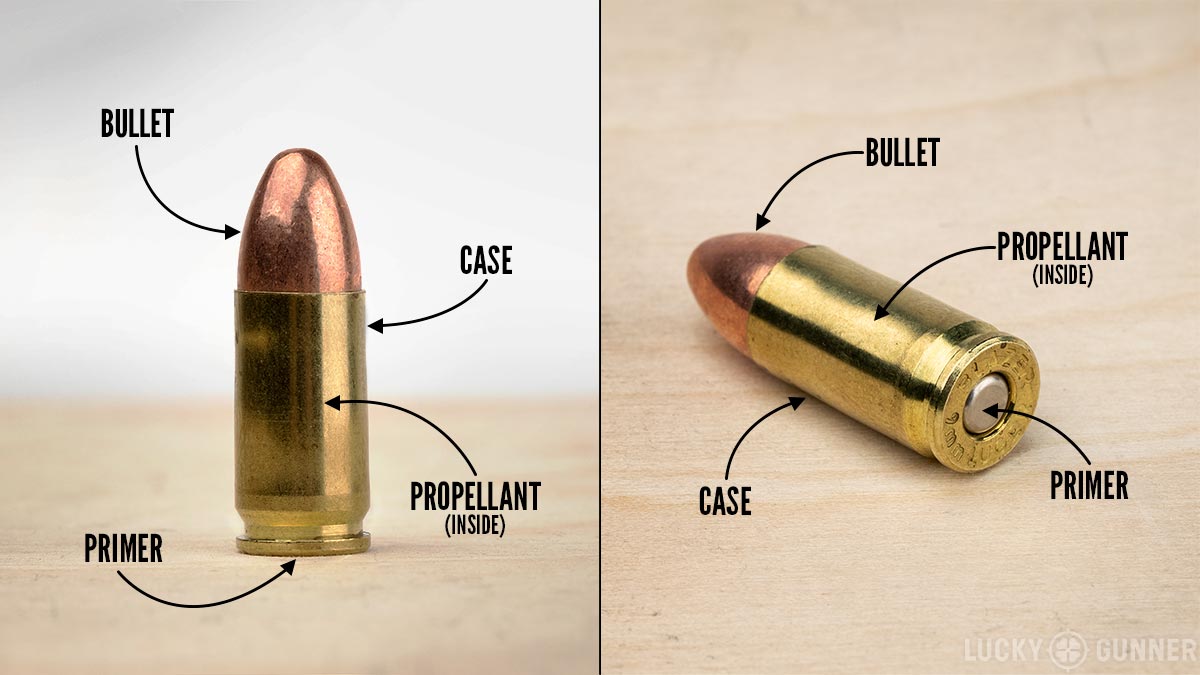 On top is the bullet. Down here is the case. At the bottom, we have the primer. And then inside the case is the gunpowder or propellant. Knowing this terminology will help us make sense of the info on the box.

The cartridge name always starts with a number followed by a suffix. The number represents the diameter of the bullet, either in inches or millimeters. The suffix helps distinguish different cartridges that have the same bullet diameter.

This ammo will only work in a gun that is specifically made to fire 9mm Luger. I chose this caliber for my example because it’s the most popular handgun caliber in the country. And it can be a little confusing compared to some other calibers because it has several different names. Often, we just call it 9mm with no suffix. It’s also called 9x19mm, 9mm Para, or 9mm Parabellum. Other suffixes like 9mm Short or 9x17mm are not the same cartridge and will not work in a gun made for 9mm Luger. 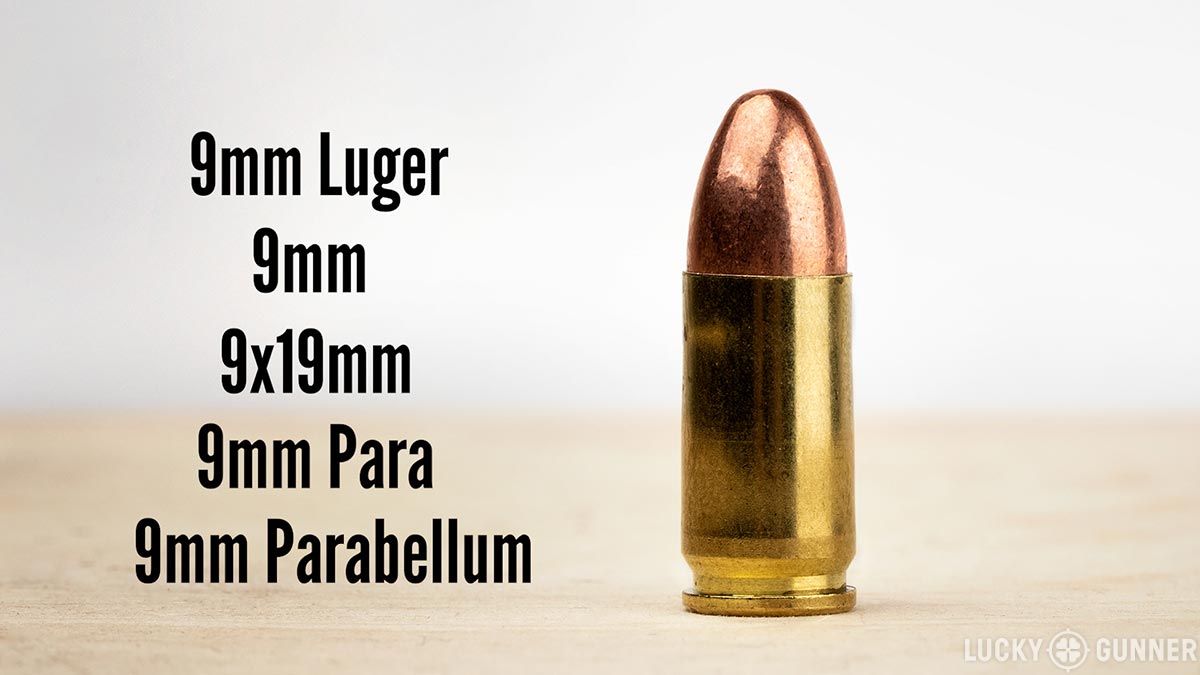 [EDIT: We’ve had several questions about 9mm NATO ammo. 9mm NATO is not quite the same as standard 9mm Luger. It’s loaded with a bit more pressure, like a +P round (explained below). Most modern handguns — especially full sized pistols — are built to handle the pressure of 9mm NATO ammo. But you should always check your owner’s manual or contact the manufacturer to make sure your gun is rated for 9mm NATO before using it.]

If you’re unsure of what caliber your gun fires, it’s always engraved on the gun somewhere. Usually, it’s on the barrel, but it could also be on the slide or the frame.

If you try to load your gun with ammo that’s the wrong caliber, usually it will not fit. But in some cases, the ammo will kinda fit and if you fire it, the gun can be damaged, possibly injuring the shooter. So you gotta get this part right.

Once you get the correct caliber for your gun, you’re good to go. The gun should at least function and you can start practicing. But there is more to know, so let’s continue.

Below that, it says “brass case.” The vast majority of cartridge cases are brass, but steel cases are also common. Those are a dull grey or brownish color. Steel-cased ammo usually costs less than brass. In some guns, it’s not quite as reliable, but it’s usually okay.

A few companies also make aluminum-cased ammo. These cases have a dull light grey appearance. Like steel cased ammo, aluminum cases tend to function well in most, but not all handguns.

Cases with a shiny silver appearance are not steel or aluminum. Those are brass cases with a nickel plating often used in premium-grade self-defense ammo.

Next, we have the phrase “centerfire cartridges.” That just means this ammo has primers in the center of the case head. Most ammo is centerfire. The major exception is .22 LR, which is a popular cartridge for beginners. That’s a rimfire cartridge.

.22 cases don’t have a primer in the case head because the entire rim acts as the primer. 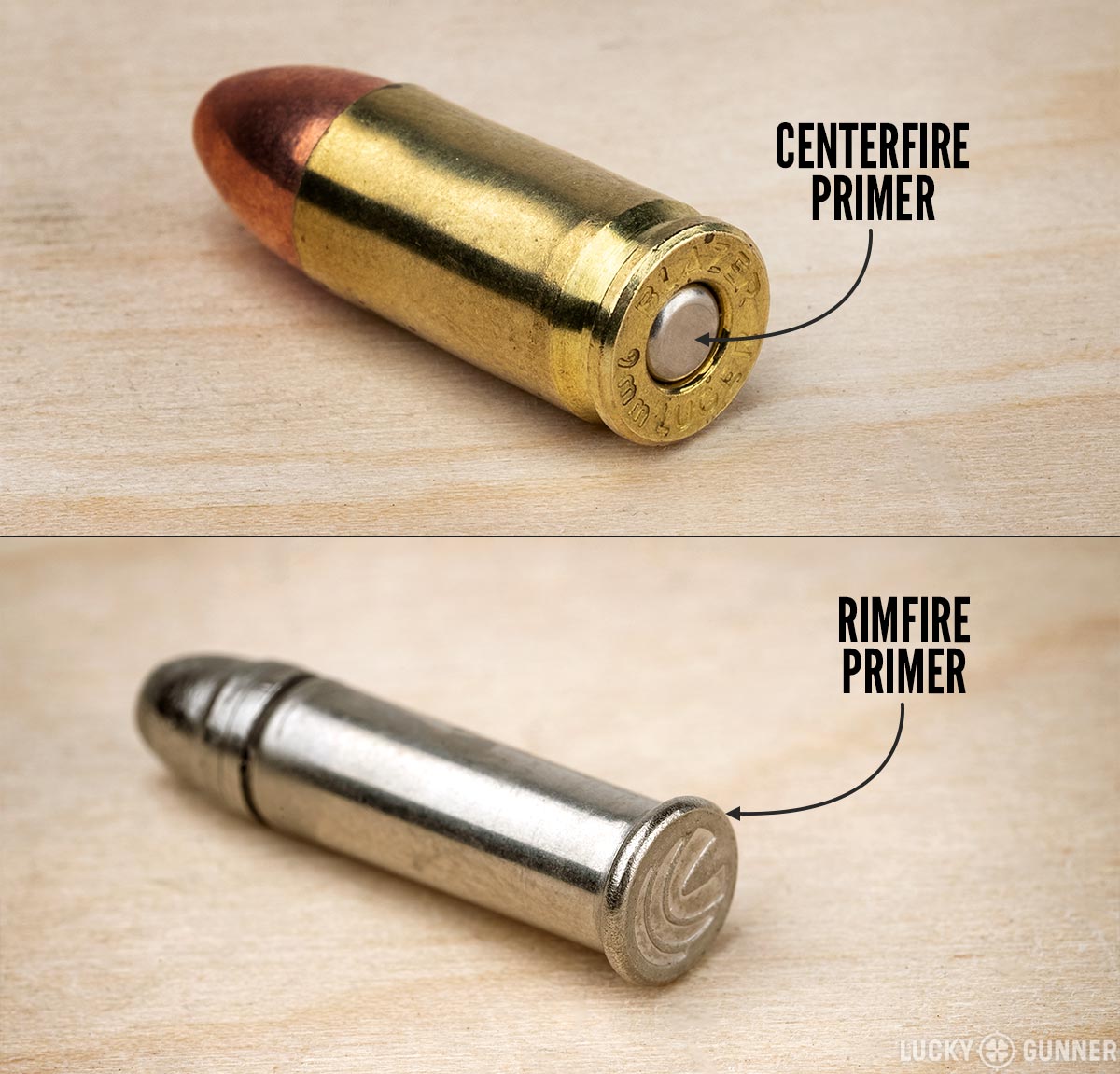 Below the caliber, it says 115 grain — that’s the weight of the bullet. I’ll come back to that in a minute. Then it says FMJ, which is the bullet type.

Most pistol ammo is loaded with one of two different types of bullets. The first is FMJ for “full metal jacket” or “ball ammo”. It’s a lead bullet covered with a copper jacket. This particular bullet is a round nose full metal jacket. Sometimes they can be flat on the top. If you have a semi-automatic pistol, this is the kind of ammo you’re going to use 99% of the time and is mostly intended for practice and target shooting. 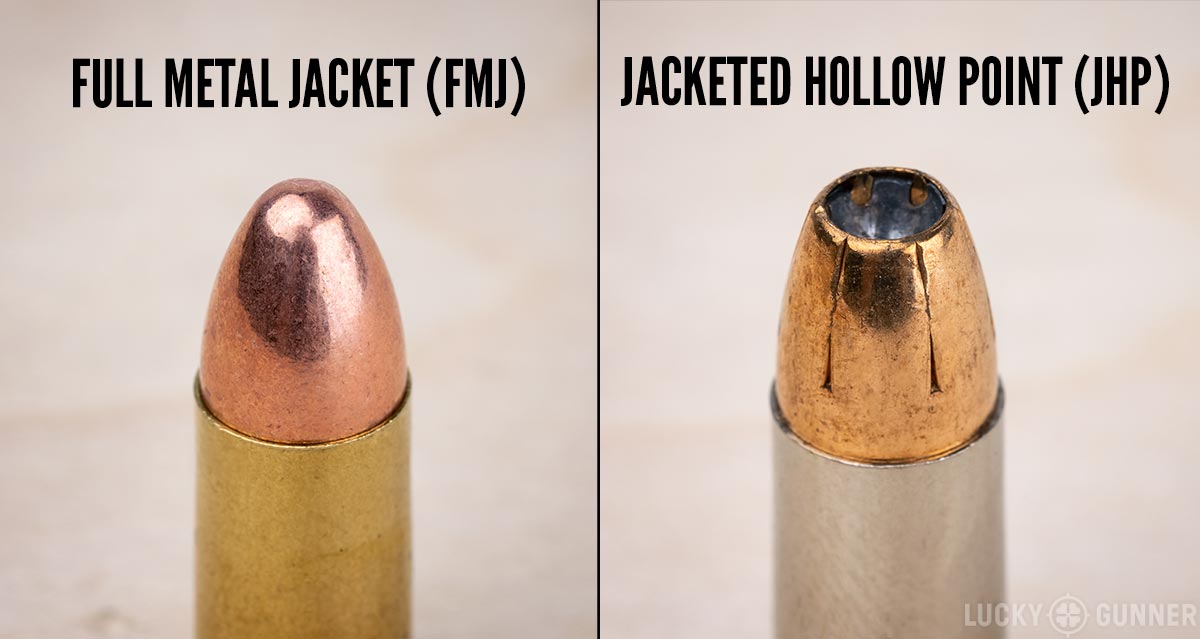 The other bullet type you need to know is JHP for jacketed hollow point, usually just called hollow points. Most of these bullets are also lead with a copper jacket, but they have a hollowed out section at the tip. These are used for self-defense ammo and sometimes hunting ammo.

Hollow points are designed to expand when they strike a soft target like an animal or a person. That causes the bullet to slow down so it doesn’t exit the other side of the target and hit something or someone else. FMJs tend to just sail in and out and keep on going. 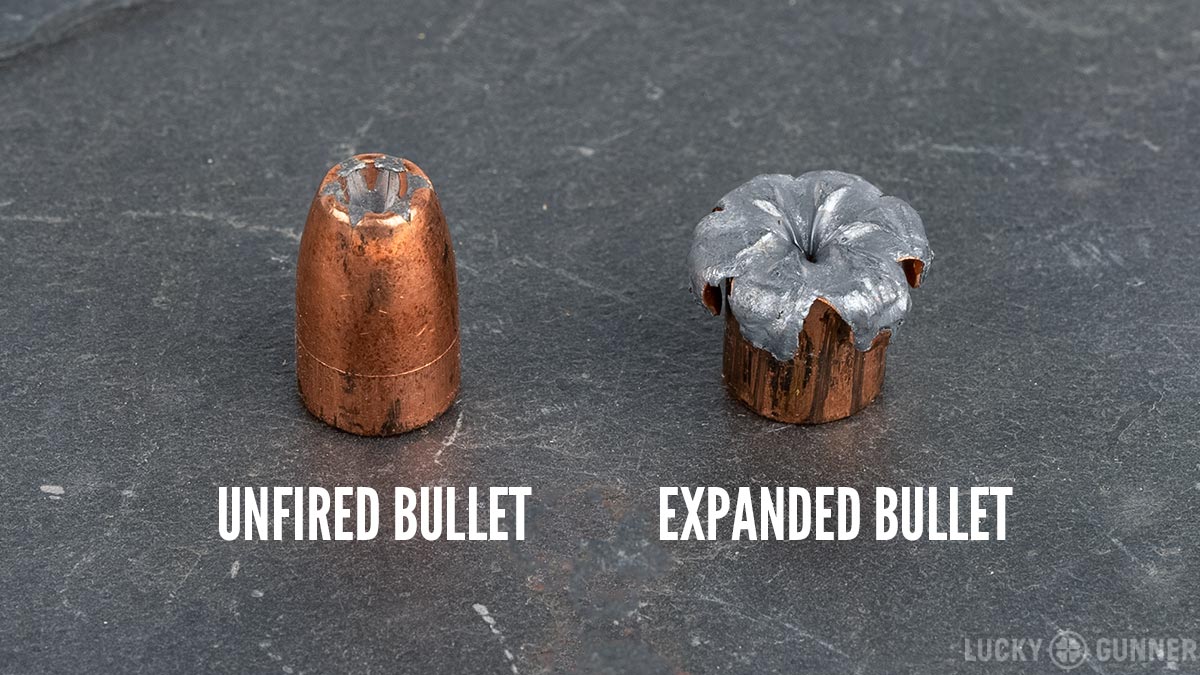 A wound created by a hollow point might also have the potential to stop a violent attacker quicker than a wound from an FMJ.

Now, let’s go back to where it says 115 grain — the bullet weight. Grain is an antiquated unit of measurement that we still use for ammo. Every caliber has around two to four common bullet weights. The most common bullets for 9mm are 115, 124, and 147 grain, but there are plenty of others. As a beginner, bullet weight is really not very important most of the time, especially for practice ammo. It’s not all that important for experienced shooters most of the time, either. But eventually you may discover that your gun is a little more accurate or reliable with some bullet weights over others.

There’s one more designation you should know that’s not on this box of ammo. Some ammo is labeled +P, which stands for extra pressure. 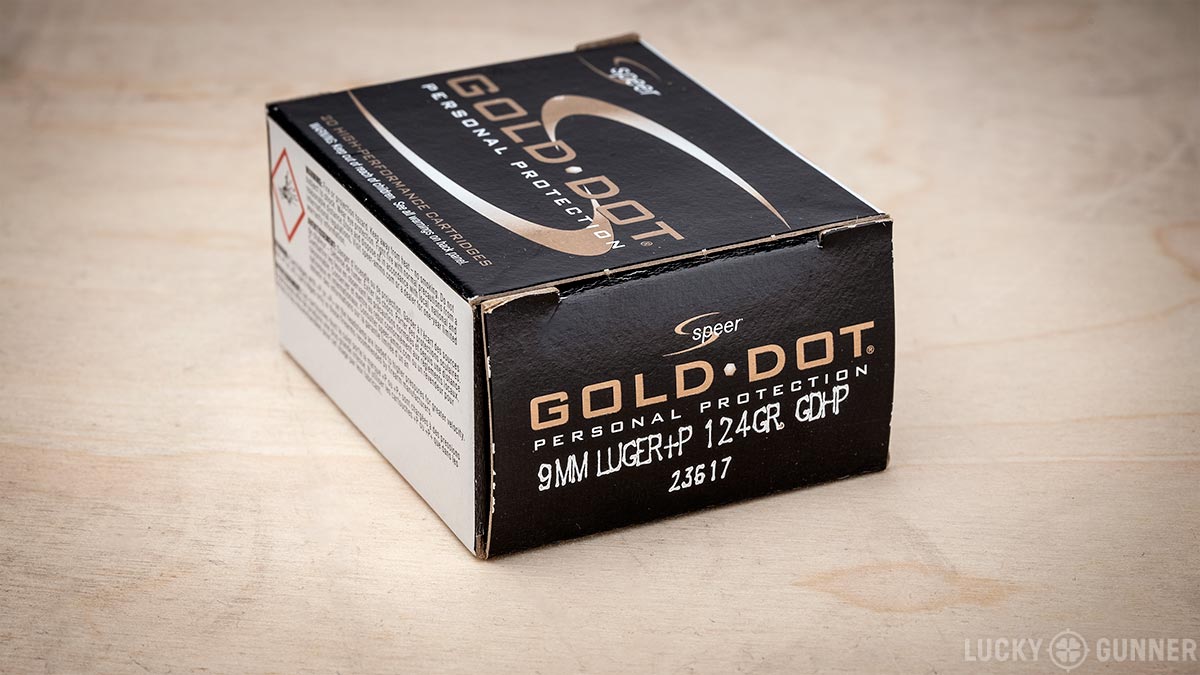 These are usually hollow points that have a little more velocity than standard loads. That translates to more felt recoil for the shooter. For a beginner, that’s not ideal, so I’d suggest avoiding +P loads until you’ve mastered the basics of marksmanship.

Before firing any +P ammo, be sure your handgun is rated to handle the extra pressure. Your owner’s manual should indicate whether the gun is safe to use with +P ammo. Most modern handguns are rated for +P, at least in small quantities, but they could be problematic for some older models.

What Ammo Should I Buy?

So that leaves us with the big question you probably came here for: what ammo should you buy? For casual practice, you can usually get away with shooting whatever is most affordable for your caliber — generally some kind of FMJ ammo. I’d suggest starting with brass cased ammo. Once you know your gun functions okay with brass and you don’t have any malfunctions with it, then you could try steel or aluminum cased ammo if you want to save a few bucks. Also, for the sake of safety, stick with name brand factory-made ammo. Don’t shoot random mystery ammo that comes in a plastic baggie at the local gun show.

Choosing a hollow point load for self-defense can be a little more tricky. Gun people will argue endlessly about which loads are most effective and why. It can be really easy to lose perspective. Just keep in mind that your ability to hit what you’re aiming at is many times more important than ammo selection. The ammo needs to function reliably in your gun. Ideally, it hits close to where your sights are aligned at close range. Everything beyond that is just extra.

If you want an easy starting point, I typically recommend Federal HST, Speer Gold Dot, or Hornady Critical Duty or Critical Defense. Those all have a good track record. But most ammo will work just fine if you know how to shoot, so don’t overthink it.

If you’ve got any more questions about ammo, our team is always ready to help. Send them an email at customerservice@luckygunner.com.