Throughout our series on defensive shotguns, many of the techniques and tips we’ve talked about have been geared toward pump-actions. That made sense to us because pump-actions are still by far the most common type of shotguns among armed citizens in the US, and they can be difficult to operate with a high level of proficiency. But there are also plenty of capable semi-automatic defensive shotguns out there, and I wanted to give some attention to one of the best: the Beretta 1301 Tactical. I picked up one of these last September and I’ve had a chance to work with it over the last few months. Overall, I’ve been quite impressed, but there are a few quirks prospective buyers should be aware of. Today we’ve got the first of a two-part review of the 1301 Tactical. Watch for part 2 next week!

There’s really no disputing the fact that round for round, the shotgun is the most effective and the most reliable fight stopper available to the average citizen. But, they also deliver a lot of recoil to the shooter, and learning to run a pump-action well is less intuitive than the average carbine or pistol.

And those are a couple of the main reasons why fewer people today are choosing a shotgun for home defense in favor of other types of firearms. I think with some good training and a little practice those issues can be overcome pretty easily. But if that’s not enough to convince you to give shotguns a second chance, I want to introduce you to the Beretta 1301 Tactical.

This semi-automatic gas-operated 12 gauge comes right out of the box with everything you need in a home defense shotgun. It’s got an 18.5 inch barrel, 5-round magazine tube, fully adjustable ghost ring sights, and a rail for mounting optics. The compact synthetic stock has a 13-inch length of pull and aggressive grip texture that’s also found on the forend.

Of course, there’s always room for improvement, so I took advantage of the optics rail to install an Aimpoint Micro red dot. On the left side of the receiver, I attached some adhesive-backed velcro from the hardware store, in order to use an elastic loop sidesaddle shell carrier from Esstac.

I realize that semi-automatic shotguns have been around for well over a century now, so there has always been some alternative to the pump-action that might be a little easier to operate. But in the self-defense world, the semi-automatics are just not as popular as the pumps. There’s a perception that they’re more ammo sensitive, and the more reliable models historically have had price tags higher than most people are willing to pay for a home defense shotgun.

But the Beretta has a lot going for it that sets it apart from most other semi-autos. First, it’s extremely reliable. The 1301 is chambered for 2 ¾ or 3 inch shells, and I’ve fired about 1000 rounds through it over the last few months, consisting of no fewer than 20 different types of ammo. It’s cycled everything I’ve fed it so far — birdshot, buckshot, slugs, low recoil ammo — it will run just about anything that fits in the chamber.

It’s has failed to completely cycle exactly twice so far. Both were failures to return to battery, and they occurred when the action was bone dry at the end of a long range session. A couple of drops of lube make it good for another few hundred rounds. The two malfunctions I did have were both really easy to clear with a quick bump to the bolt handle to get it back into action. I’ve gotten pretty comfortable running my 870 and I very rarely short stroke the action at this point, but it’s definitely happened more than twice in the last 1000 rounds. So even though the Beretta has only been reliable 99.8% of the time, that’s still a better track record than I have while manually running a pump-action. 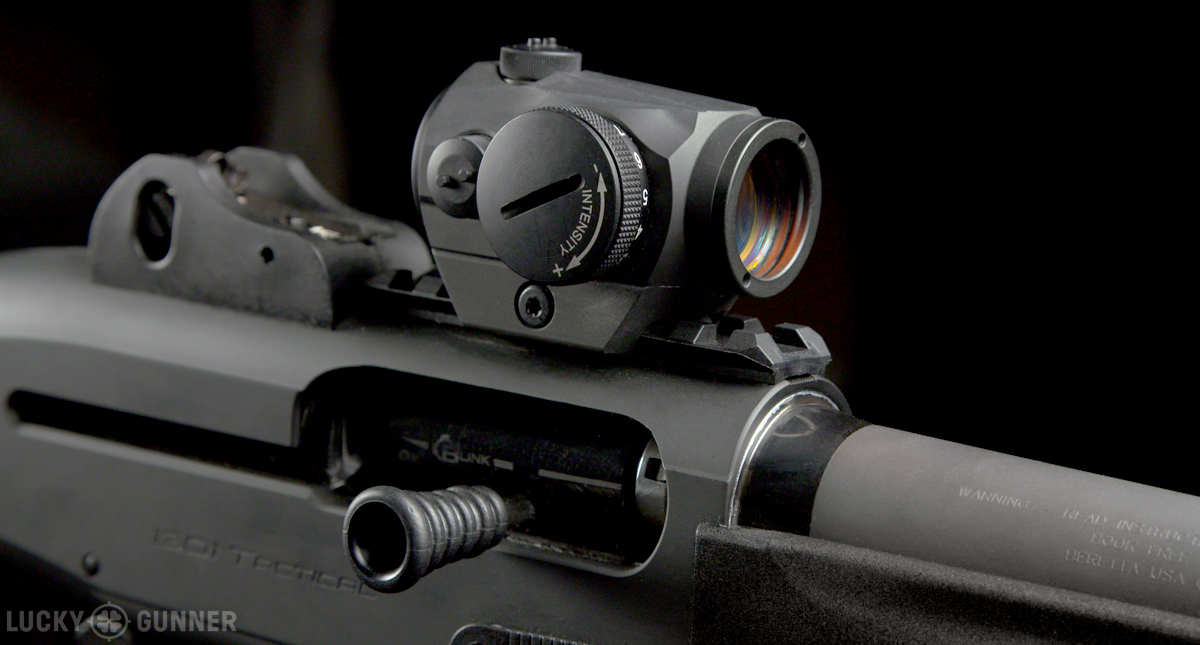 The Beretta 1301 is also lighter than just about any other defensive shotgun on the market. Unloaded, it weighs just 6.4 pounds. Most tactical shotguns — semi-autos or pumps, weigh at least 7 and a half pounds, sometimes a lot more. The weight is really the first thing you notice when you pick up the Beretta. It doesn’t feel flimsy or cheap — just really handy. And if you’re thinking that weight would translate to increased recoil, you’d be wrong. This is an incredibly soft-shooting 12 gauge thanks to the Beretta “Blink” gas system and rotating bolt. The gas from a fired shell travels through tiny holes in the bottom of the barrel and then… well I don’t really know. It doesn’t matter though — magic happens inside the forend to make the bolt cycle and you get softer recoil, so you can run strings of rapid fire to your heart’s content.

That mild recoil, together with a lot of other really well thought-out features makes the Beretta 1301 a shotgun for people who don’t like shotguns. It’s not just easy to shoot, it’s really fun to shoot and that means you’re more likely to take it out to the range and practice with it and get really good with it.

Okay, so back to that issue of cost. The MSRP is $1075. It sells for usually closer to $950, but sometimes a lot less if you get lucky. Even though that’s on the low end for a quality semi-automatic shotgun, I think a lot of people are still going to find that price tag pretty steep, especially when you consider that a basic pump-action costs about a third of that. But what you’re paying for is kind of a training shortcut. Instead of burning range time and ammo learning how to manage recoil or run a pump without inducing a malfunction, your primary focus can be putting rounds on target. There are still manipulations to learn, but nothing you have to do in between every shot. So you can work on speed and accuracy and reloading and spend less time thinking about just making the gun work. I think that makes it well worth the added cost, especially if you’re starting from scratch with no prior training on a pump-action.

So if you can fit it into the budget, I would definitely recommend the Beretta 1301 Tactical as home defense shotgun that just about anybody can learn to use with devastating effect. Except there are a couple of downsides. And they’re not small ones, and I’ll have the details on that next week in part 2.