The Beretta CX4 Storm carbine was originally released back in 2003. It’s had a fairly mediocre first decade, being mostly overshadowed by “real” black rifles like AR and AK variants. But it’s no secret that I’m a sucker for pistol caliber carbines, and I want to do my part to give some extra exposure to Beretta’s underdog.

I’ll be honest, though: the CX4 is not a great firearm. In its stock form, it’s pretty good, but it needs a little help to tap into its full potential. So in case you’re looking for some new ideas for how you can be quickly parted from your money, here’s what I’ve done to get the most out of my CX4.

Out of the box, the CX4 isn’t too bad when considered for what it purports to be — a reliable, lightweight, compact self-defense carbine in 9mm or .40S&W that uses the common Beretta 92 series or PX4 series magazines. When you consider the $915 MSRP, it’s… ehhh, only okay. Fortunately, real world prices often hover closer to the $650-700 range. So if you find a deal, and add a little imagination, you can end up with a pretty slick little package.

As it arrives from the factory, the extra few inches of barrel at the muzzle-end of the Storm are quite tragic. The unnecessary extra length spoils the otherwise compact profile and quick handling characteristics of the CX4 for purely legal reasons. So after a lengthy wait for the return of my “Mother, may I” ATF form, I had the last 4.5 inches of the barrel unceremoniously hacked off, and the muzzle threaded for a suppressor; in this case, an AAC Ti-Rant 9. The suppressor is made from lightweight titanium and aluminum, so after shortening the barrel, the net result is no discernible change in weight but now it can be fired without hearing protection using subsonic 9mm ammo.

The other major change I had to make was internal. One of the often-maligned attributes of the Storm is the mushy, heavy trigger pull. Mine weighed in at 11 lbs., and was about as crisp as a wet noodle. That was easily remidied with a replacement trigger and hammer from Sierra Papa, a small company specializing in custom aftermarket parts for the CX4.

To top it off, I added an Aimpoint H1 micro red dot optic. I didn’t want to add any more bulk to the CX4 than necessary, and the H1 weighs only 3.7 oz with the mount.  Unfortunately, it had to be sent back to Aimpoint for some warranty work, so filling in for the time being is the larger Aimpoint Pro. Still a good fit for the CX4, though the carbine is not currently quite as svelte as before. 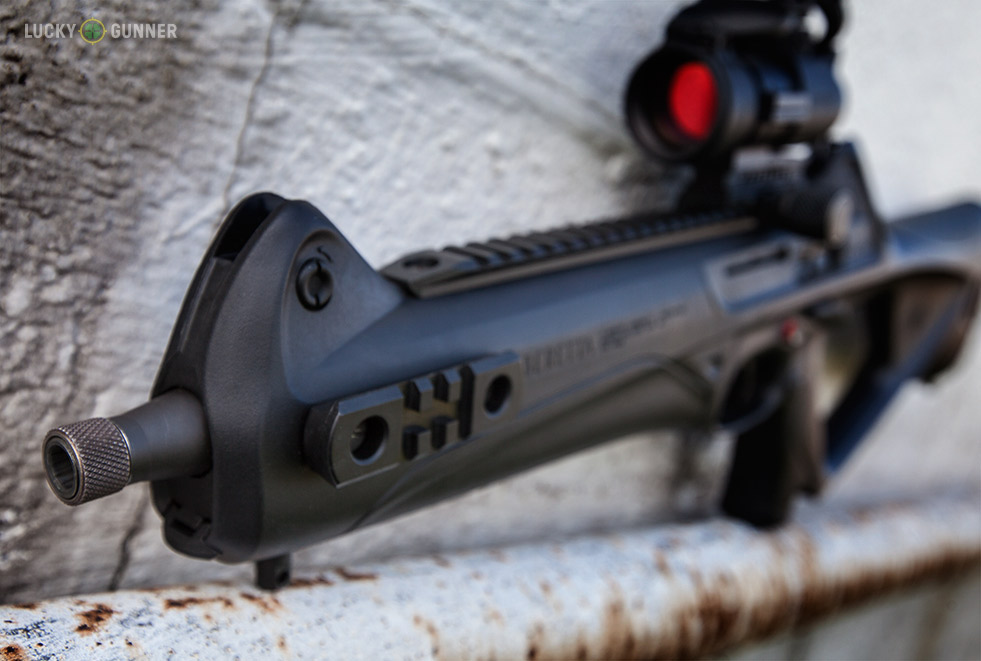 A final addition was the DeSantis Storm Packer, a buttstock mounted storage pouch. It holds two magazines, which is nice if you want to store the rifle unloaded but still ready to go. However, I actually got it to prevent the factory cheek pad from yanking out my beard hair, as it is prone to doing.

Even though all these mods have raised the overall cost of this CX4 up to premium AR-15 territory, this CX4 will never have the power or modularity of an AR-15. But it’s a blast to shoot, it’s a very maneuverable home defense carbine, and can be fired at almost any shooting range, indoor or outdoor.

What is a Wadcutter Bullet?

Last week, we took a quick look at boat tail rifle bullets. I wanted to follow that up with another...