One of the guns I was most eager to check out at this year’s SHOT Show is the upcoming Beretta M9A3 9mm pistol. I don’t usually pay much attention to minor “product refresh” type releases, especially for guns that have already been around forever like the Beretta M9/92FS. But the specific set of features that Beretta included in this gun piqued my interest because this Beretta M9A3:

Is very similar to this custom Beretta 92G below:

That’s my own personal Beretta 92 that I sent off to Allegheny Gun Works last year for some modifications. A Beretta 92FS was the very first centerfire pistol I ever shot and I’ve always had a soft spot for it. I’ve owned a few different variants over the years, but none of them had all the features I really wanted in a Beretta. At the top of the list, I wanted the Vertec style grip and a “G” configured slide.

For those not familiar with the Beretta lingo, the Vertec pistols were made in the early 2000s and featured an accessory rail and a straight backstrap. Removing the “hump” from the rear of the Beretta’s grip shortens the trigger reach, allowing better leverage for double action shots. It’s not for everyone, but for a lot of people, the Vertec grip is a major improvement and makes the gun much easier to shoot well.

The “G” style pistols have a decocking lever in place of the slide mounted safety. This addresses another major complaint of the Beretta pistols, which is the redundancy of having a manual safety on a double action pistol. In the past, Beretta has run G-style pistols in very small batches, and they’re difficult to find on the used market. Converting a 92FS to a 92G requires machining of the slide’s internals and has to be done by a gunsmith who’s familiar with this modification. 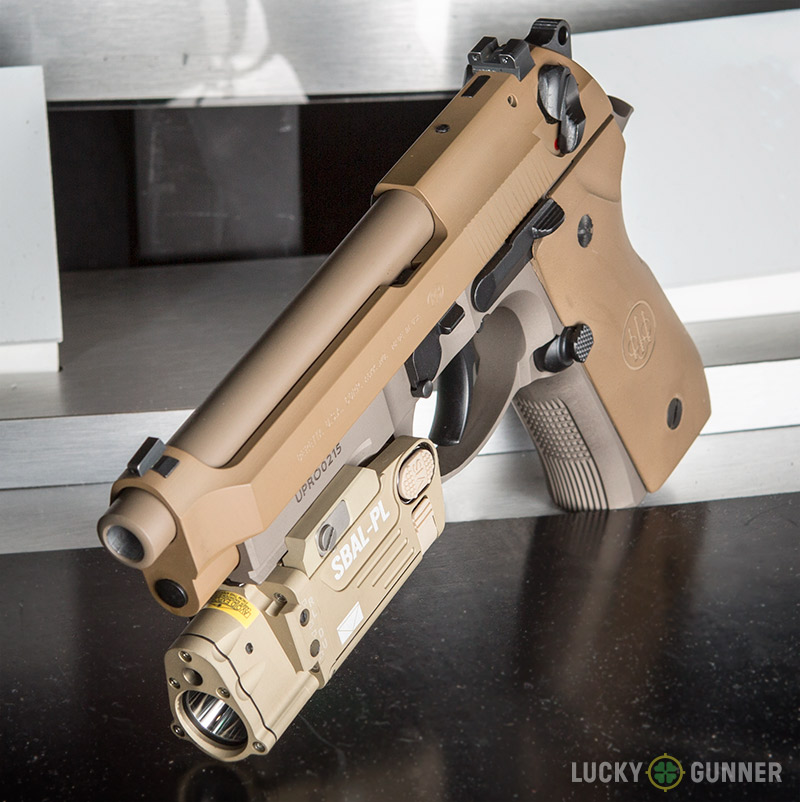 Beyond those two major changes, I also asked for the barrel to be threaded for a suppressor, tuned trigger and action, the front sight modified to accept a fiber optic tube, and rear sight replaced with Wilson Combat Battlesights. After being worked over by Josh at Allegheny, the end result is a good pistol that’s now a great one.

Why should you care about my custom pistol? Because the Beretta M9A3 has almost all of the same features and then some.

The M9A3 has the Vertec style grip, but it also comes with wraparound style grip panels that mimmick the shape and feel of the original M9. The backstrap is also checkered for a more positive grip.

Likewise, the safety on the M9A3 allows the user some options. It comes standard with the traditional safety/decocker lever, but the internals of the slide have been machined to accept the G-style decock-only lever. The user can simply swap the parts out and perform the conversion without the need for any gunsmithing.

The front sight on the standard Beretta 92FS is machined into the slide, and there’s not enough metal underneath it to safely cut a dovetail notch for other sights. Like some of the more recent upgrades to the M9, the M9A3 comes from the factory with the dovetail cuts and tritium night sights are installed as standard.

There were several configurations of the M9A3 on display at SHOT, and some of them included a pre-threaded barrel. Beretta’s marketing for the pistol seems to suggest that the threaded barrel is standard, my my guess is that it will be available with a standard barrel as well.

Firing the M9A3 at the Industry Range day, I could tell that the trigger wasn’t as smooth as the amazing action job that Allegheny performed on my own pistol, but the gun still shot great, and I can’t think of anything else I’d want from a factory Beretta.

If you’ve never been much of a fan of the Beretta 92 series of pistols, this is the one that could possibly change your mind. The Army doesn’t seem to interested in it, but I have no doubt that the M9A3 will be a welcome addition to Beretta’s commercial lineup.

At this point, Beretta has not set a release date or what their suggested retail price will be. If you’re interested, Signup at Beretta.com to receive email updates when more details are announced.