It’s rumored that .32 ACP will work in a revolver chambered for .327 Magnum or .32 H&R Magnum. It might work sometimes, but there are a few reasons this isn’t always such a great idea. Details in the video below, or scroll down to read the transcript.

Last week, I posted a video all about .32 caliber revolvers and the benefits of a snub nose chambered in .327 Federal Magnum or .32 H&R Magnum that can also fire .32 S&W Long or .32 Short. In response, a lot of you guys mentioned in the comments that I left out a fifth caliber because a .327 or .32 Magnum revolver can also safely chamber .32 ACP. I have seen this mentioned in magazine articles and in forums all over the internet and a lot of people claim to have done it on a regular basis with no apparent problems. .32 ACP has next to no recoil out of a revolver and it tends to be a bit more plentiful and slightly more affordable than .32 revolver ammo. But today I want to talk about why firing this cartridge in your .32 caliber wheel gun might not be such a great idea. 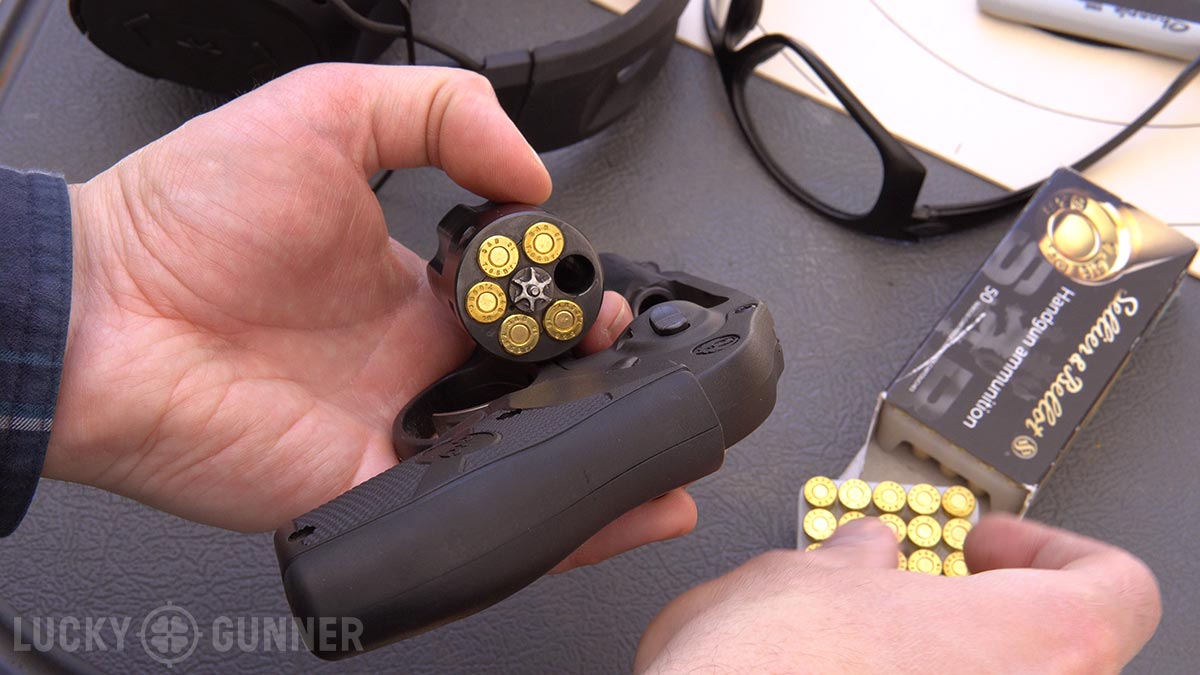 .32 ACP was designed for semi-automatics, but unlike most other semi-auto cartridges, it is semi-rimmed. That means the diameter of the base of the cartridge is just slightly wider than the diameter of the case body. So if you try to chamber it in a .32 revolver, rather than slipping down into the chamber, the rim holds it in place. The pressure of .32 ACP is also significantly lower than .32 Magnum or .327 Magnum. So a .32 ACP fits in a .32 revolver and it shouldn’t make the gun blow up in your face, but there are a few other issues you might run into.

First, it’s probably not going to be very accurate. In a revolver, the bullet from a .32 ACP has a long way to travel down the cylinder before it encounters any rifling. And the bullet diameter is also a tiny bit smaller than the .32 revolver bullets. So the bullet might not ever stabilize and it will end up tumbling in flight and accuracy will suffer. 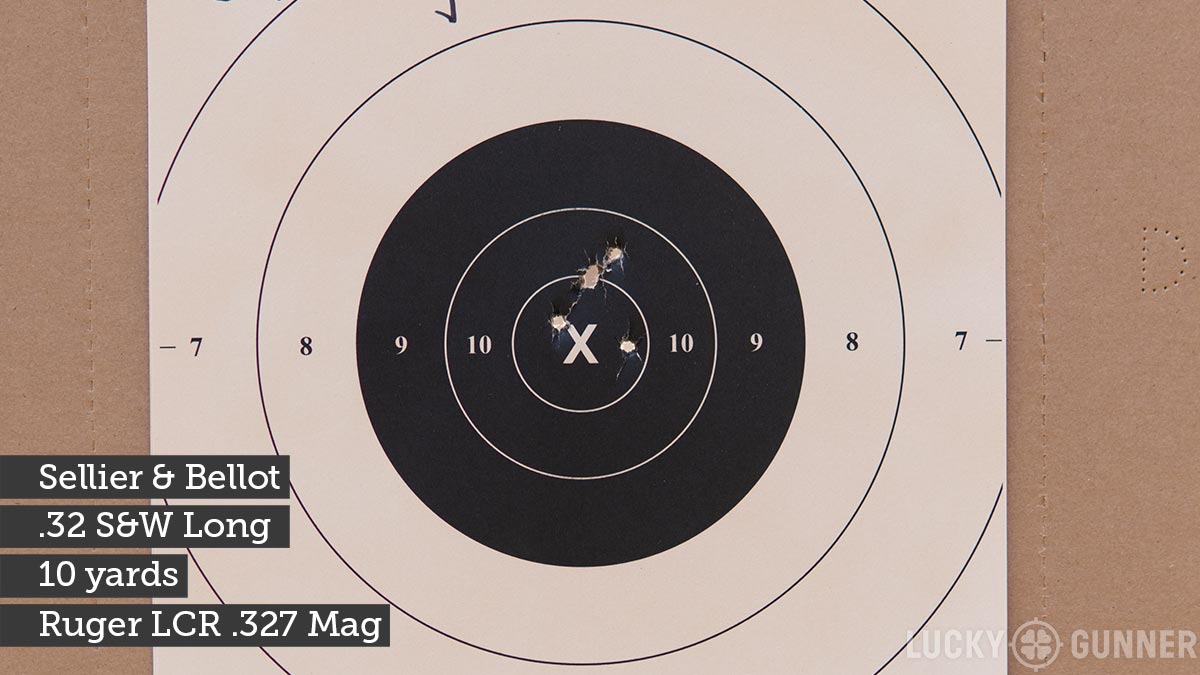 Now here’s five rounds of S&B .32 ACP at 10 yards. You can see the oblong bullet holes that tell us the bullets are not hitting the target head-on. 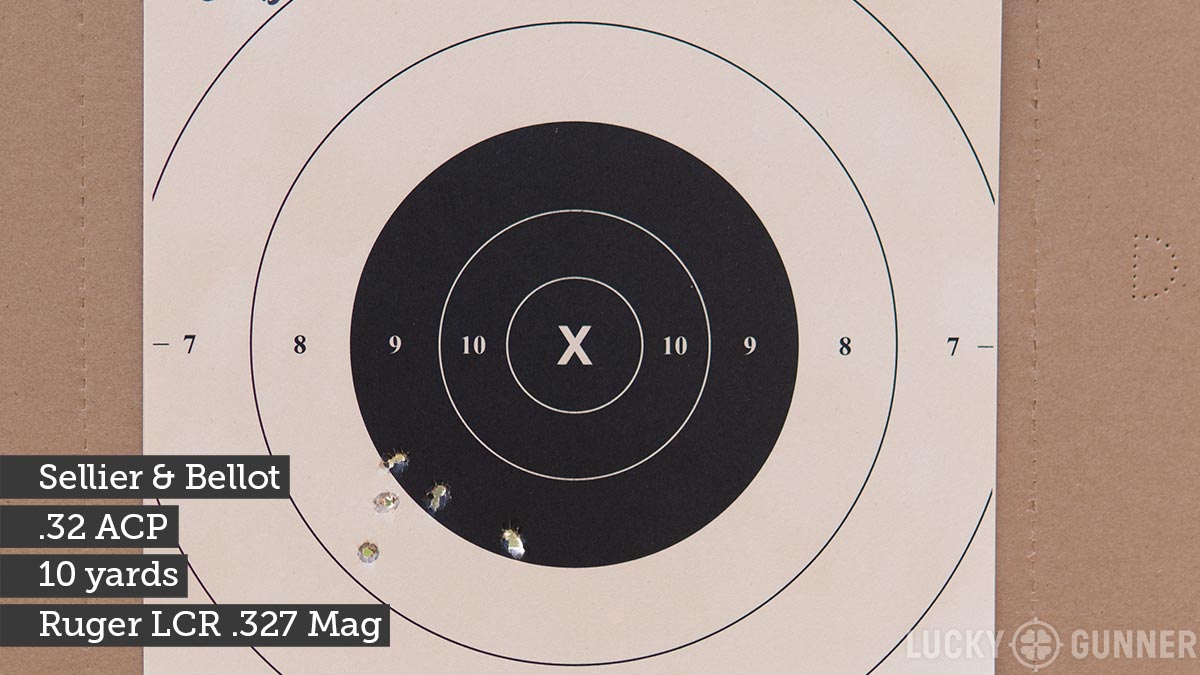 With Winchester .32 ACP I get a much bigger spread and about the same thing with ammo from PMC. 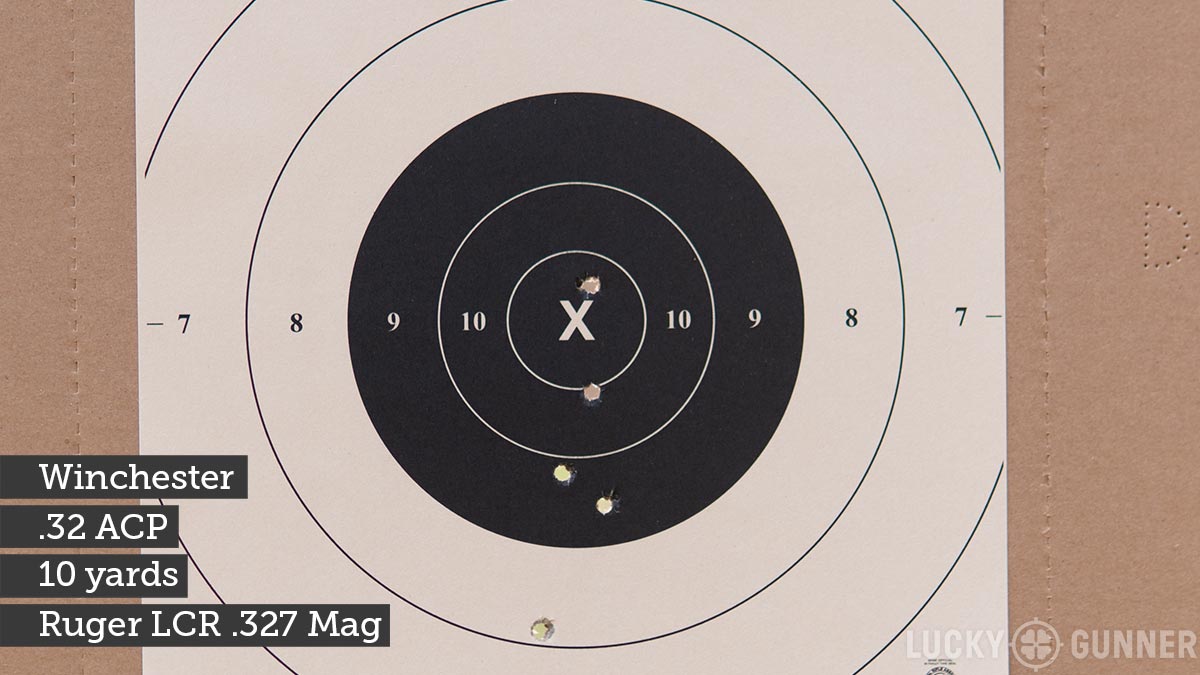 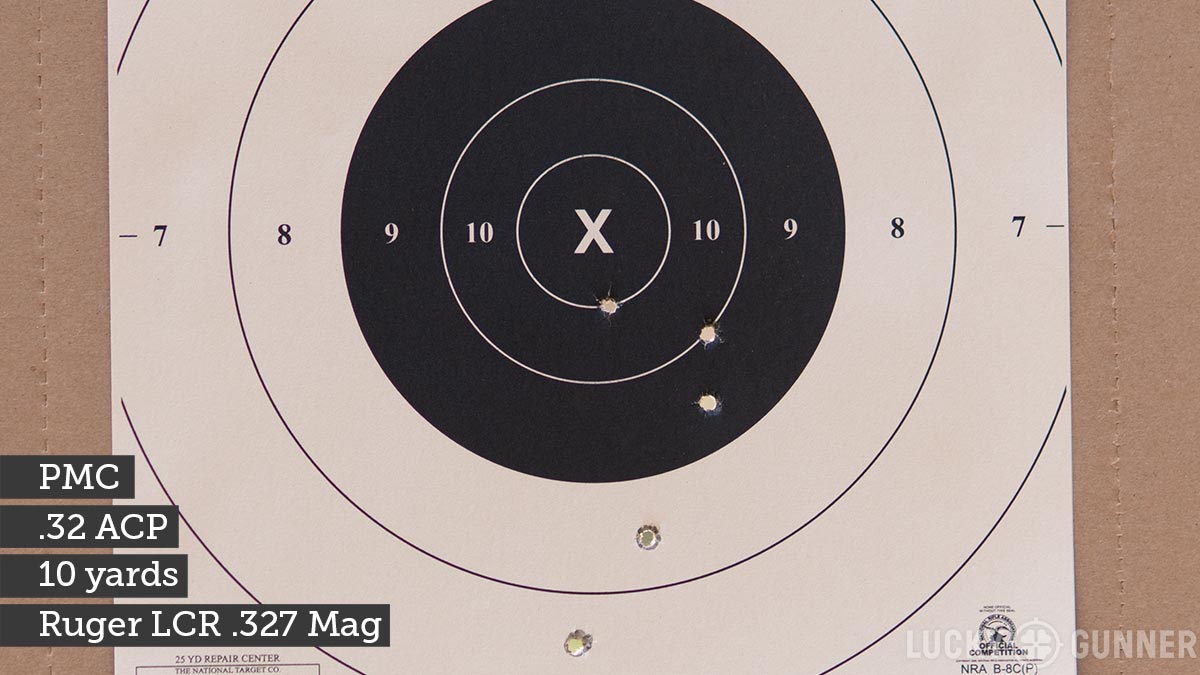 With all three, you can see these tell tale signs of tumbling bullets. 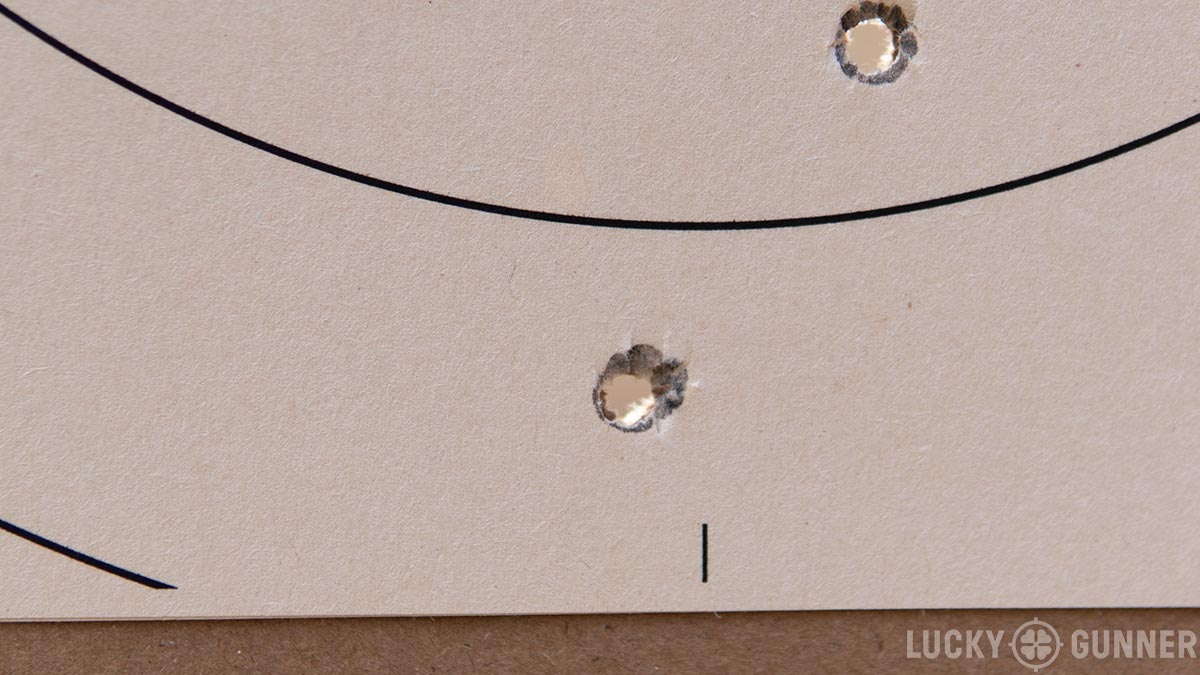 But maybe accuracy isn’t all that important for what you have in mind. You just want something that will make the gun go bang. Even so, there are some other issues you need to know about.

Your extractor may or may not work with .32 ACP. When I tried it, the rounds would extract okay right after I cleaned the gun, but once there was a little bit of fouling in the chambers, some of the cases would get stuck. It’s not that hard to get them out, but it can be kind of annoying after a while.

In a lot of cases, this means the firing pin won’t hit the primer hard enough and the round just won’t fire. No big deal. But what can also happen is this… 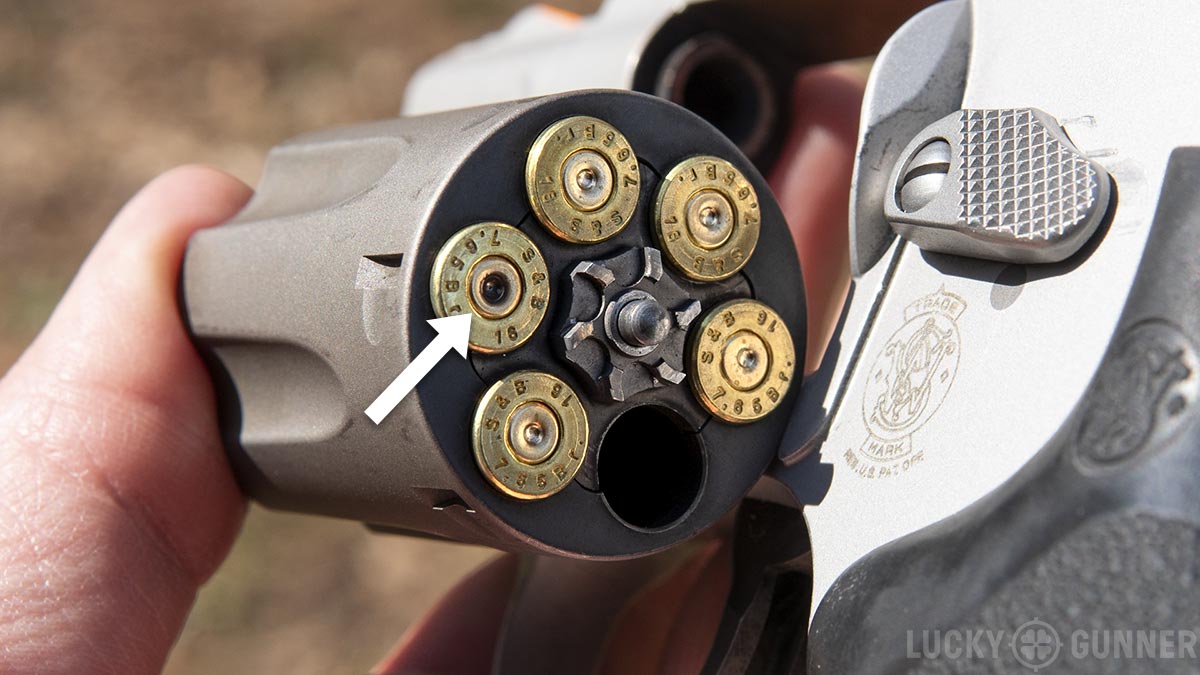 Take a look at the primer on the round at 9 o’clock in this Smith & Wesson. That is a much deeper indentation than there should be. Now, I have to admit, this is stretching the limits of my technical understanding of what’s going on here, but I think I have an idea.

As pressure builds inside the case, the excess space between the primer and the firing pin is allowing the case to be pushed back into the firing pin, which leaves that deep indentation. If the firing pin were to break through and actually pierce the primer, you could get some gas escaping through the hole and that’s never a good thing. It’s not good for the revolver, and it could potentially be dangerous for the shooter. I think it’s also possible this could cause the primer to back out of the case slightly which could freeze the cylinder until you get that round out of there.

I could be wrong about all of that and even if I’m not, firing .32 ACP in your .32 revolver is probably not going to cause any serious injury. But seeing this deep primer indentation is a big red flag for me. The gun manufacturers have not said that .32 ACP is compatible with their guns and there is probably a very good reason for that. At best, it’s not going to be very accurate, and worst case scenario, it damages the gun and the shooter.

.32 Long, on the other hand, usually only costs one to three bucks more per box than .32 ACP. It’s a super accurate cartridge, low recoil, and by design, it is compatible with .327, .32 Magnum, and .32 Long revolvers. If the Zombie Apocalypse comes and .32 ACP is the only ammo you can get your hands on that will fit in your .32 revolver, then I guess it’s better than nothing, but until then, I’d suggest feeding your revolver ammo it was designed to fire. Since the shambling undead hordes have not yet forced all online commerce to a grinding halt, just remember you can get any of that ammo from us with lighting fast shipping at LuckyGunner.com.

Why the Best Snub Nose Caliber is .32

The NAA Mini Revolver: You Can Do Better

Why the Best Snub Nose Caliber is .32

The .32 revolver calibers don't get much attention these days. You may not have even heard of some of them....