Shotguns can be excellent tools for home defense, but their long overall length presents some challenges for maneuvering in tight spaces. Today, we’re looking at a technique called “short stocking” that was developed to meet those challenges. Short stocking has long been used by law enforcement and other entry teams, but it’s equally relevant for the armed citizen at home. It makes a ton of sense to include it in any close quarters shotgun technique training.

Check out the details in the video below, or scroll down to read the full transcript (but you’ll want to watch the demos in the video to really understand how the technique works).

A couple weekends ago, I got to take a 2-day shotgun class from 360 Performance Shooting taught by Ashton Ray and Tim Chandler. It was a phenomenal class and you’ll be hearing more from me about that in the near future. For now, I want to talk about just one of the topics covered. It’s a technique that I’ve seen in most shotgun classes I’ve been to, but we got to spend a little more time on it than usual. It’s a technique for using a shotgun in close quarters called short-stocking (or some people call it short-sticking).

The modern version of the short-stocking technique was developed and popularized several years ago by Rob Haught. I took his shotgun class last year and he also happened to be in the 360 Shotgun class the other day as a student. Short stocking has been taught and widely used by law enforcement for the last three decades or so. It works great for SWAT teams and clearing buildings but it could also be a really useful technique for the armed citizen who keeps a shotgun at home for personal protection.

It’s an easy technique to learn but difficult to master, especially the correct application of it. I certainly haven’t mastered the use of this technique, but I wanted to share it because a lot of people seem to think that you have to have a registered short barreled shotgun or some kind of stockless shotgun in order to make good use of a shotgun in tight spaces. Fortunately, that is not the case.

Inside the home, the shotgun really shines in a sit and wait kind of role. If you need to go searching around your house, a handgun is probably better for most people. And really, if you think there might be a violent criminal in your home, going out to look for them by yourself is one of the most dangerous things you can do. But sometimes you might not have any choice and a shotgun might be what you have available.

The typical shotgun that’s set up for home defense like this vanilla Remington 870 has an 18-inch barrel and a stock that’s about two inches too long. If we use a typical high ready or low ready position with this gun, it can feel pretty cumbersome when you need to go up and down stairs, or move through tight hallways, or search around and behind furniture and stuff like that. Your movement is going to be restricted unless you completely dismount the gun and from here, it’s going to be slow to get back into action if you suddenly find the person you’re looking for. We also really don’t want the end of the barrel sticking out past every doorway or corner to announce our approach.

With short stocking, we can essentially shorten the overall length of a shotgun so that we have basically the same profile as if we were using handgun. All we have to do is rotate the gun inward 90 degrees and place the flat of the stock on top of the shoulder. Now from here, I can go down to a low ready, I can move around something if I need to, and if I need to come up to shoot, I’ve got a much shorter motion compared to bringing the whole gun up. On top of my shoulder, the stock is still useful as a third point of contact. It’s going to help me index the gun and keep it pointed at where I need the rounds to go. If my space opens back up, I can easily just bring the gun back to my shoulder for a normal mount. 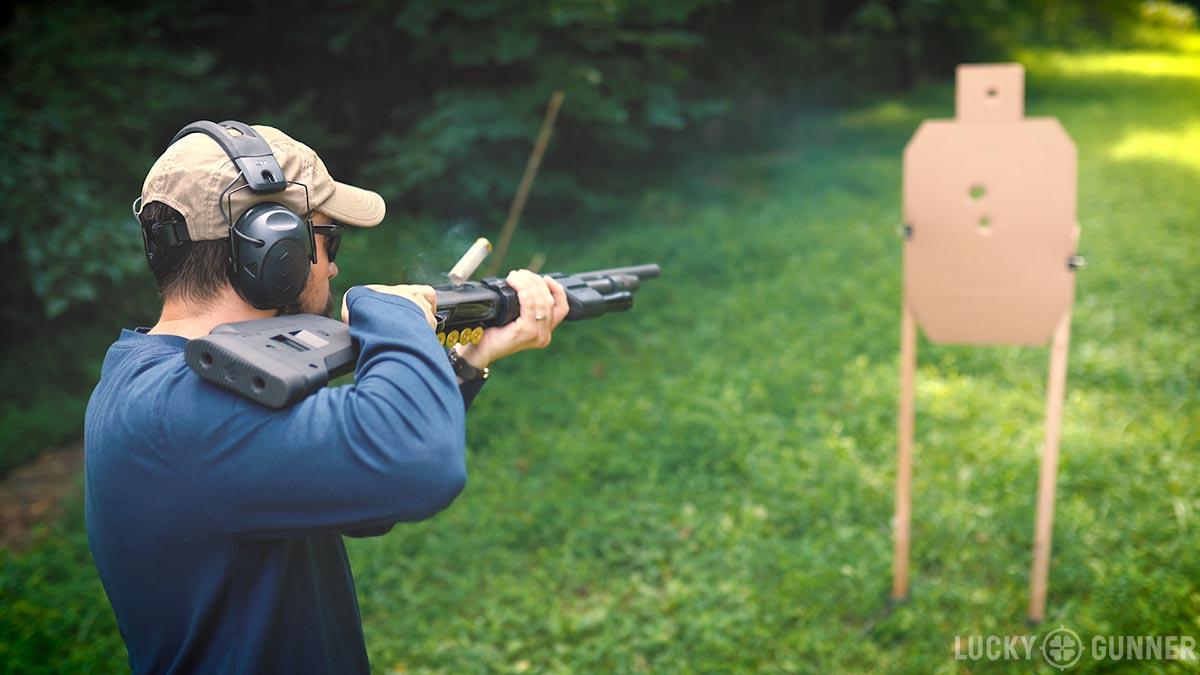 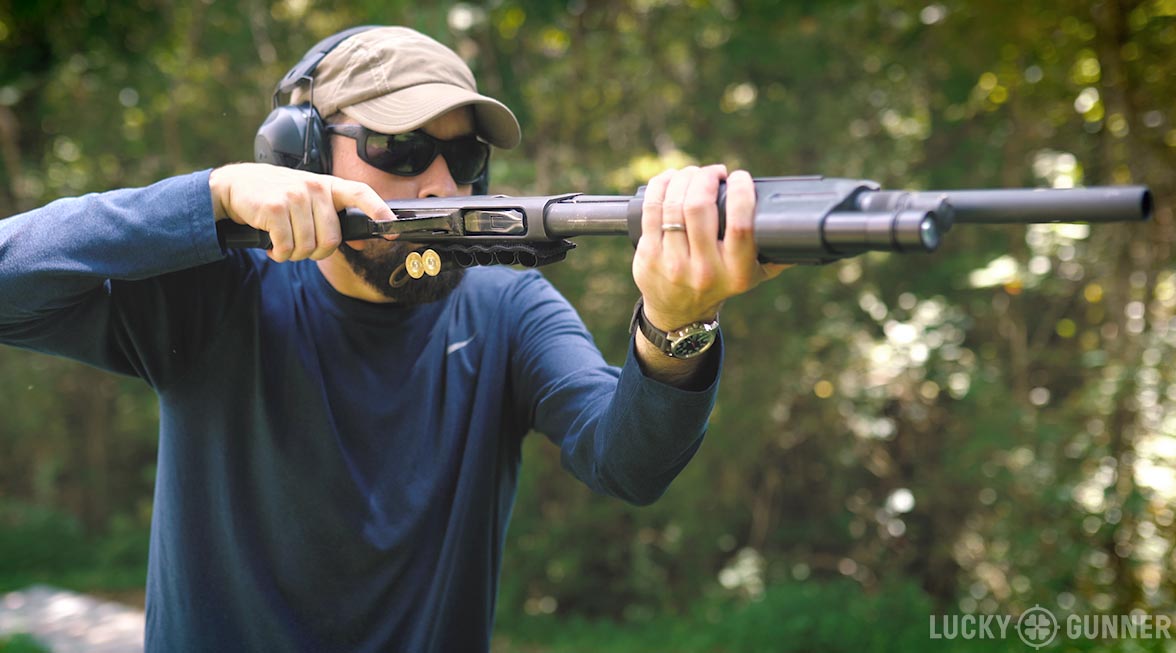 If I need to fire from the short stocking position, I just bring the muzzle up. Then, get a good push-pull going. That’s another critical Rob Haught technique for any kind of shotgun shooting. Push forward on the forend and pull back with the firing hand, and then fire. So even though I don’t have the mass of my upper body behind the stock to help control the gun the way I normally would, with a good push-pull, I’m still able to manage that recoil and I can get it back on target for a follow-up shot if necessary.

Here’s Rob Haught himself demoing the technique last year in his class. Obviously, he has a much better mastery of it than I do. Notice his shoulder and elbow are more relaxed than mine were. And just before he fires, he pushes the gun out a little to accentuate that push-pull effect. I’m going to run that again in slow motion and you can see the gun is still recoiling. The stock is moving back when he fires, but because he has such a strong push-pull, he’s always in complete control of that gun. 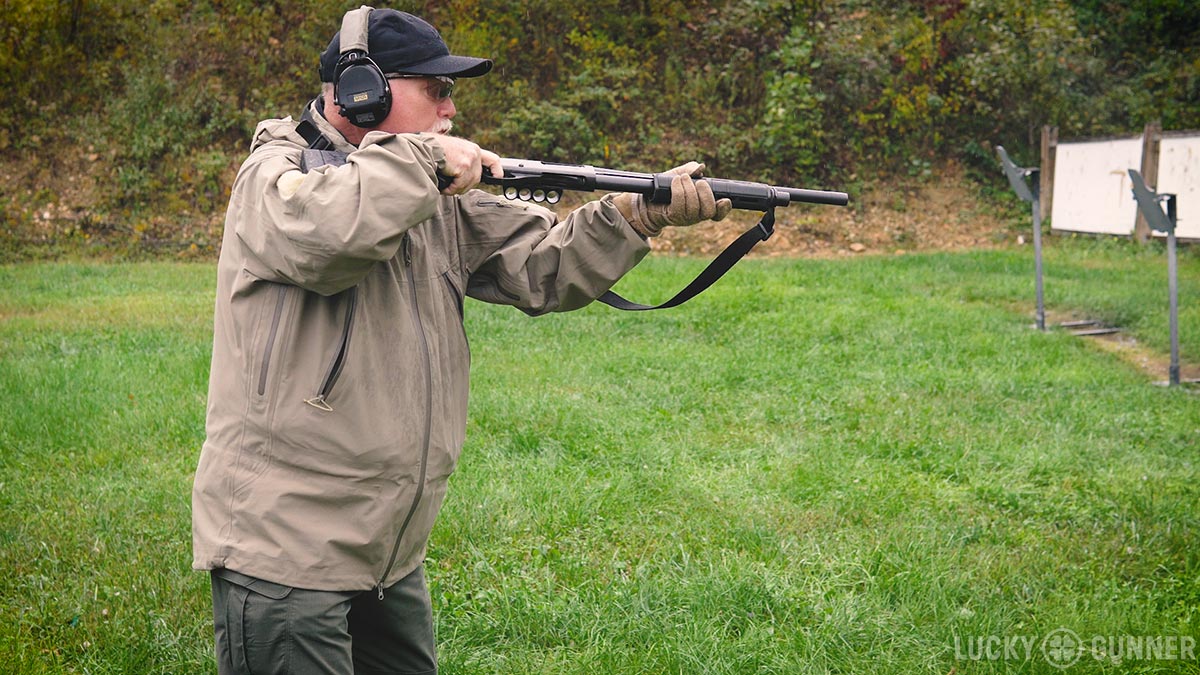 You should be careful, though, when you try this for the first time, especially if you have a rear sight or an optic or something on the top of your receiver. You really don’t want to smack yourself in the face with that. Make sure you understand the push-pull technique before you try short stocking. If you do it correctly, it works really well, even for someone my size. It is easier if you’re bigger, but you don’t have to be 200 pounds to use this technique. You might have some trouble if you’re using a shotgun that has a buttstock with a pistol grip. It’s doable, but I’ve seen a couple of people have issues with that in classes.

When Rob Haught teaches this technique, he has you keep the support hand and wrist in the normal orientation. You then wrap your thumb around the barrel. I think that probably gives you a bit better control on the push pull. When you need to run the action (if you’ve got a pump gun), you just let go with the thumb and run it like that. The only issue is that if you practice this for several rounds, the barrel gets pretty hot. If you notice, in these clips I have of Rob demoing the technique, he’s wearing a glove on his left hand for that reason. I don’t usually have gloves with me at the range. So, I’ve just gotten used to rotating my wrist so my thumb is on the fore-end and not on the barrel and that seems to work okay.

Either way, I think running the action on a pump gun without the stock in my shoulder is actually more difficult than managing the recoil. It always feels kind of clumsy. So, with a semi-auto it’s much easier, especially with a gun like the Beretta 1301 that already has pretty light recoil for a 12 gauge.

Aiming with the Short Stocking Technique

Obviously, when the gun is rotated, we lose our sighting system, whether that’s a simple bead sight or a red dot or whatever. That’s probably not really a huge deal since we are talking about close quarters where we think the threat may be within a couple of feet. But if we come around a corner and there’s a guy across the room or down the hall, we might need to actually aim. Remember, we’re not point shooting at clays or birds up in the air with a 20-foot wide cloud of birdshot. We’ve probably got buckshot in this shotgun and at typical indoor range, that spread is only going to be somewhere between the size of a golf ball and a basketball. So not only do we need to aim in order to hit the target, we also need to aim because every pellet that doesn’t hit the target is going to hit something and we’re accountable for that.

So from here, we can use the end of the barrel as a coarse aiming reference. But the gun is a good five or six inches lower than it would be if we had a normal cheek weld. So, we have to compensate for that. If you just put the muzzle on the target and fire, the shot’s going to go high. At about 15 or 20 feet away, it could be a foot high or more. So you might have to aim for the waistline or the gut in order to get a high-center chest hit. This is something you just have to experiment with to find out what point of aim works for you and your gun and ammo.

Also, make sure the muzzle is pointing straight forward. If I’m not careful, I have a tendency to let the stock drift away from my head and that cants the muzzle to the left. When you sight down the barrel, you can tell if it’s way off like that, so try to keep it centered up.

This short stocking technique isn’t the only way to compensate for using a long gun in tight quarters. There are a lot of other options. Craig Douglas showed us a high ready version in his Armed Movement in Structures class I took last year that looked like it would be pretty effective. I’ve also seen techniques that look very similar to just hip firing the gun. But, you’ve got the stock indexed against the side of your body. So there’s not just one correct way to do this. It is really context-dependent and it takes a lot of training and practice to understand the best application of these techniques. If you watch guys like Rob and Craig who have years of experience moving around inside buildings with long guns, they can just fluidly transition from one to the next depending on the circumstances.

If you want to get some in-person training with these and other shotgun-specific techniques, 360 Performance has another shotgun class coming up on September 21 in Virginia and Rob Haught has a two-day course on October 19-20 in Arizona. I highly recommend either one of those and you can follow those links to get the details.

Whether you’re training in a class with one of these guys or out on the range by yourself, you can get all the shotgun shells you need from us with lightning fast shipping at LuckyGunner.com.

Why does the barrel look crooked in my pistol? Why does a puny .380 ACP Beretta Cheetah have almost as...