Controlled Feed Versus Push Feed Rifles (And Whether You Should Care)

When I started shopping around for my first bolt action rifle a few years ago, I stumbled across one of the great classic debates within the shooting world: push feed action versus controlled round feed action. At the time, I didn’t quite grasp what all the fuss was over, and decided I couldn’t go wrong with the ubiquitous Remington 700 (which, it just so happens, is a push feed rifle).

The Remington has served me well, but as I added more bolt guns to the stable, I couldn’t help but get sucked back into the “push feed versus controlled feed” argument. Not only is there disagreement over which style is “better”, there’s some debate over whether it makes any real difference at all.

Almost all bolt action rifles work under the same basic principle. The shooter loads cartridges into a magazine — an internal magazine or a detachable box magazine. When the bolt is pulled to the rear, the spring in the magazine pushes the top cartridge up. When the bolt is pushed forward, the cartridge moves with it and into the chamber to be fired. The shooter pulls the bolt rearward again to eject the spent casing and load the next round.

The issue at hand is what exactly happens to that cartridge between the time it leaves the control of the magazine’s feed lips and the time it’s sitting snugly in the chamber.

In a controlled feed action, the extractor grabs onto the rim of the cartridge and guides it into the chamber. Wherever the bolt goes, the cartridge goes.

Here’s a demonstration of feeding and extraction with a controlled feed rifle both at normal speed, and then slowed down. Notice that if I move the bolt back and forth, the cartridge stays under the control of the extractor. The rifle used here is a CZ 527, which, like many controlled feed rifles, is based on the Mauser M98 action.

It’s a little easier to understand what’s going on if you remove the bolt and look at how it interacts with the cartridge up close. Notice the large claw-like extractor and the slot on the other side of the bolt.

I can slide a cartridge onto the bolt face with the rim underneath the extractor. When I move the bolt, the cartridge stays with it, just as it would inside the action.

That slot on the side of the bolt is to make room for the ejector, which is a stationary piece of steel located toward the rear of the action. When the bolt is pulled rearward, the ejector hits the base of the cartridge, sending it flying from the action. With the bolt removed from the rifle, you can see the ejector. 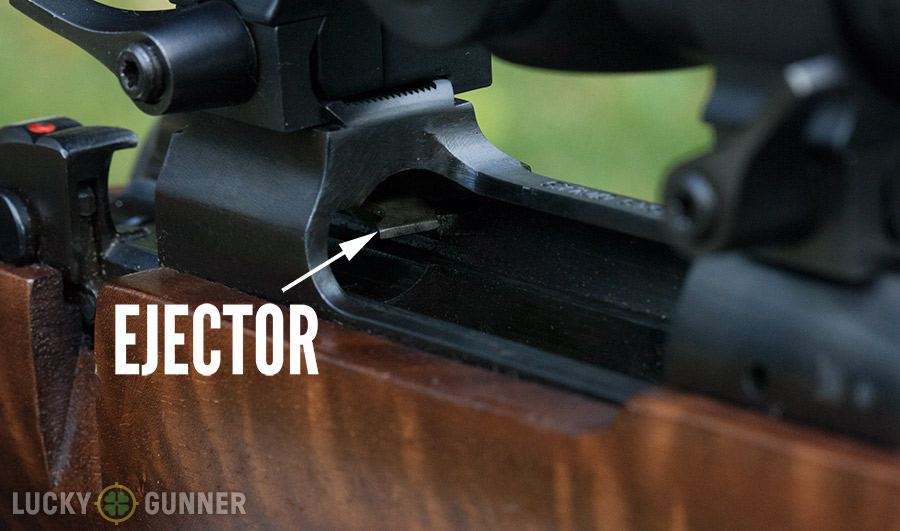 Controlled feed actions can be found in rifles from CZ and Ruger, as well as any action that’s patterned off the classic Mauser Model 98 military rifle. The best-known controlled feed rifle in the U.S. is probably the pre-1964 Winchester Model 70. Recently, Winchester reintroduced the classic pre-64 design of the Model 70 to the delight of controlled feed fans everywhere.

In a push feed action, the bolt does not have complete control of the cartridge, and simply pushes it into the chamber.

The push feed bolt has an ejector too, but instead of a stationary piece in the receiver, it’s a small spring-loaded piece on the bolt face itself. This is similar to what you’ll see on the bolt of an AR-15 and many other semi-auto rifles. Also notice that the extractor is much smaller than the one on the controlled feed.

The ejector puts pressure on the cartridge, so the bolt can’t hang on to it like the controlled feed bolt. After firing, as soon as the front of the case clears the action, the spring tension from the ejector pushes the case out.

The majority of today’s bolt action rifles are made with a push feed style action, including those from Remington and Savage.

Like most of these kind of debates in the shooting community, there is no clear winner here. The biggest advantage of the push feed system is that they’re easier and cheaper to manufacture. The controlled feed actions are more expensive, but are also slightly more reliable under some very specific conditions.

Push feed actions are susceptible to a type of double-feed malfunction that doesn’t occur with controlled feed actions. In a push feed rifle, if the bolt goes most of the way forward, but not completely, it’s possible to bring the bolt back (leaving the cartridge sitting loosely in the chamber) and start feeding another round. The result is a double-feed where the second round is blocked by the first. The real question here is how you’d ever induce a malfunction like that in any real world scenario.

The answer is stress. Normally, bolt action rifles are fairly easy machines to operate. But unless you’ve got a few thousand repetitions of working that bolt under your belt, strange user errors start to happen when you introduce stress. The push feed action double-feed is one of those unfortunate errors. Most of the tasks we use bolt guns for don’t involve a great deal of stress unless you’re hunting something that can hunt you back. So it’s no surprise that some of the most vocal proponents of the controlled feed action are folks who hunt dangerous game.

On the flip side, none of the major bolt action sniper rifles fielded by the US military in the last few decades have employed a controlled feed action. In the civilian world, the fast-growing Precision Rifle Series long-range competitions has shooters performing feats of marksmanship in some pretty unconventional positions under the stress of the clock. Across the board, the dominant action type among the top PRS competitors are the Remington-style push feed and its derivatives.

The bottom line is that the vast majority of shooters should choose a bolt action rifle with little regard for whether it’s a push feed or a controlled feed. There are excellent rifles made using both mechanisms, and some pretty crappy rifles under each category as well. If you fall into the narrow minority of shooters who plan to use your bolt action rifle in a scenario where a real, measurable advantage could be had by using one action type over the other, then experimenting with some of these rifles at the range will do you a lot more good than reading about them on the Internet.

How to Safely Dispose of Bad Ammo

Whether it's a bad primer in a brand new factory round or a case of corroded milsurp rifle ammo, at...