Why the Diagnostic Pistol Target is a Waste of Time

Whether it’s called the “Diagnostic Pistol Target,” the “Pistol Correction Chart,” or the “Troubleshooter Target,” there are dozens of places online where you can find slightly different versions of the same printable target. The resource is supposed to help shooters self-diagnose their bad pistol shooting habits, but I think your practice time is better spent elsewhere. I explain why in the video below, or you can scroll down for the full transcript.

A few days ago, I was talking to somebody about some of the different drills and tests that I use to practice at the range and he asked me what I thought about those diagnostic pistol targets or correction charts you can print out. You’ve probably seen one of these before. They’re all over the internet and there are even some commercially printed ones you can buy. The idea is that you shoot at this target and based on where your misses are, the chart will tell you what you are doing wrong.

Plenty of other people have done a good job of critiquing these targets, but this isn’t the first time I’ve been asked about them, so I’ll throw in my two cents. For the kind of handgun shooting most people seem to be interested in, I think these targets are a waste of time. It’s my understanding that the most popular form of the diagnostic chart we see today was originally developed many years ago for one-handed slow-fire bullseye shooting at 25 yards. If you want to get better at two-handed rapid fire defensive or practical style shooting, you’re not going to get much relevant advice from a bullseye correction chart.

So I guess that raises the question of why we don’t just create a new version of the target that is intended for modern practical shooting. I’m sure someone will attempt to make something like that if it hasn’t been done already, but I doubt that target would be very helpful, either. I don’t know much about traditional bullseye shooting so I can’t say whether the diagnostic chart is actually helpful in that context, but I do know that for practical shooting, it is almost impossible to determine what somebody is doing wrong solely by looking at their target.

There is maybe one exception to that rule. For a right-handed shooter, if shots are consistently going low and to the left, that is typically an indication of some form of recoil anticipation. That’s a very common problem. But even knowing that, the target doesn’t tell us the whole story. Recoil anticipation can mean a lot of different things. If you’ve got hits low and left, you might be dipping the muzzle as you pull the trigger, or you might be jerking the trigger at the last instant before the shot breaks, or you might even be closing your eyes. All of that is going to be masked by the recoil and you aren’t going to know exactly what you did wrong by looking at the target. And that’s a best-case scenario for target reading — that’s assuming your misses are all grouped in one area. What if your target looks more like a shotgun pattern and you’ve got holes all over the place? That’s usually the result of several overlapping problems. If you’re anticipating recoil and you’ve got issues with your grip and bad trigger control, a chart is not going to help you figure out why one shot went high and the next one went to the left. 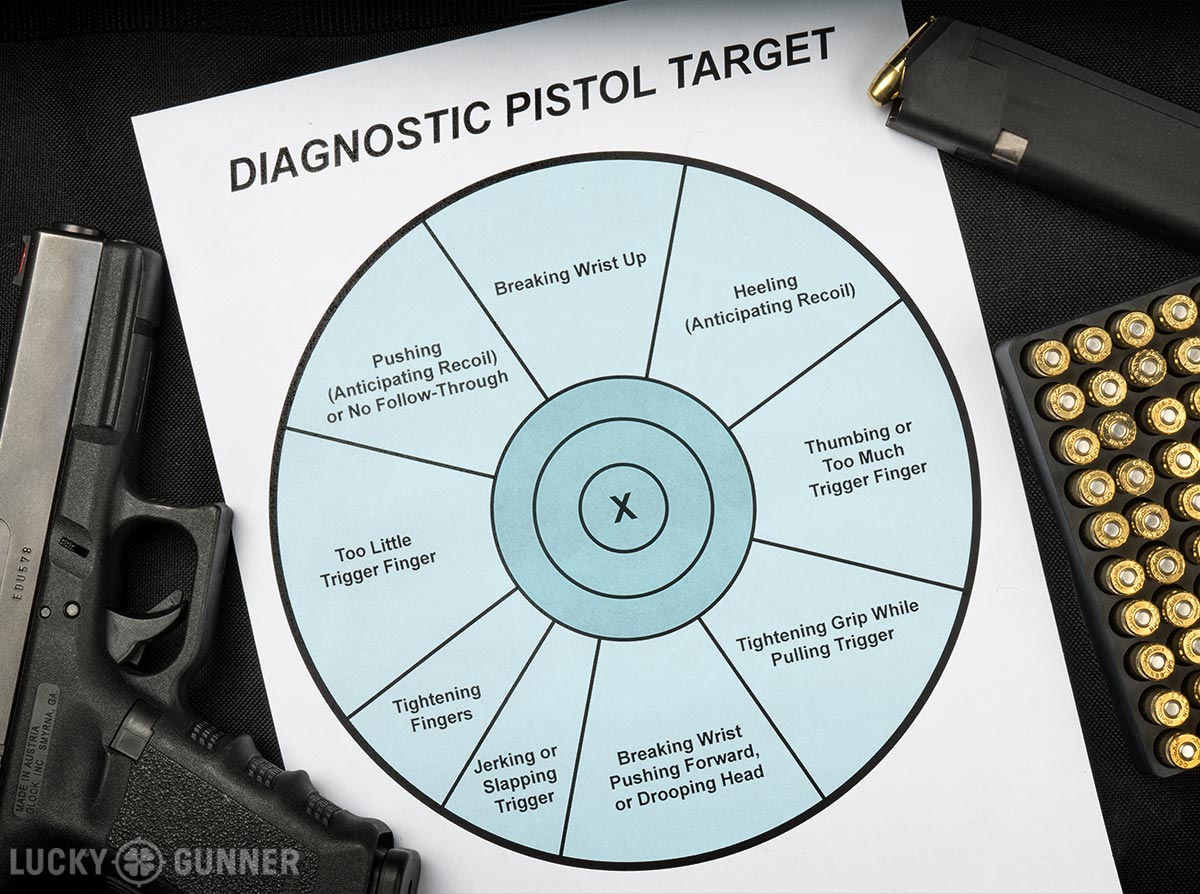 So what’s the alternative? Well, I know it’s not the answer a lot of people want to hear, but the absolute best way to improve is to get help from a qualified shooting instructor who can actually watch you shoot and give you feedback. Looking at the target doesn’t always tell us what we need to know, but a good shooting coach can watch the shooter — usually just their hands — and determine a lot about what they need to work on. I know it’s not as easy as printing out a target, but there’s really no substitute for a good shooting instructor.

The good news is that eventually, you can develop the skill of coaching yourself a little bit, and, in my experience, that can sometimes involve finding clues based on where your misses are on the target. But instead of consulting some universal chart, you have to refer to your own previous experience and coaching feedback you may have received in the past. So for example, I shoot a 6-round Bill Drill and afterwards, I think maybe I didn’t have such a great sight picture on some of those shots. Then I look at my target to confirm that suspicion and I see that a few of my hits are high. So that would tell me I’m probably letting my trigger finger get ahead of my sights. I need to be more patient and let my sights dictate when I fire. That could still be a misdiagnosis of the issue, but over time, I’ve learned that is an error I’m prone to making during a string of rapid fire at close range.

But if I back up and shoot a drill at 20 yards and I’ve got hits that are high, it probably means something different. If I’m pretty confident I had good trigger control, high misses are evidence that I may be letting my focus drift onto the target and away from the front sight. The location of the misses can tell me something, but it’s really dependent on the context and on the individual shooter. Someone else could shoot the same drills and have a target that looks exactly like mine, but they could be struggling with totally different issues.

So before you can expect a specific pattern of missed shots on your target to be a useful part of your troubleshooting process, you just have to do the time and put in some hours on the range. And for less skilled shooters in particular, you need an actual qualified teacher. There is no magic target that’s going to make you a better shooter.