Not that long ago, if you wanted to find reliable information about using firearms for self-defense, your options were severely limited. If you couldn’t make it out to one of the country’s two or three shooting schools, there were a handful of books out there, and the gun magazines might offer a useful article every once in a while. Those resources became slightly more common as the 20th century came to a close, and then… the Internet happened. Today, we have instant access to some of the best information that’s ever been recorded on any self-defense topic you can imagine. And along with that has come an exponentially greater volume of misinformation. So how are we supposed to tell the difference? That’s the topic of today’s video.

Here are a few of my favorite resources for reliable self-defense information. There are, of course, a ton of other great resources out there (even on YouTube), but I think these four are some of the best and most comprehensive:

Full transcript of the video below:

About a year ago, we decided to expand what we were doing on the Lucky Gunner blog and also start posting videos on YouTube on a more regular schedule. And one of our initial concerns when we decided to do that was that we might have to spend more time moderating comments. Because, as I’m sure you’re aware, YouTube is notorious for how nasty and ignorant the comments section can be. But that actually has not been our experience at all so far. Most of you guys have been incredibly kind and supportive of what we’re trying to do here and, while I don’t get a chance to respond to all of the comments, I want to let you know I appreciate the encouragement. It does not go unnoticed.

It’s really gratifying when people acknowledge the effort that we’ve put into this because we do try to go the extra mile to produce videos that are easy to watch and write articles that are enjoyable to read, but most importantly, we’re trying to put out information that is reliable. And that’s what I want to talk about today for just a minute because there is a lot of unreliable, just, garbage out there, especially in the realm of using firearms for self-defense. YouTube seems to have attracted a disproportionate share of that nonsense, but you can just as easily find it on Facebook or blogs or anywhere else online, and there seem to be a lot of people out there accepting it as fact without any question.

I think a big part of this problem is a blurring of the lines between shooting as a hobby and shooting as a potentially life-saving skill. So, if I want to learn something that’s purely technical like how to take a gun apart, or maybe I just want to learn some gun history, or I’m interested in the specs on a new rifle that just came out, there are a ton of online resources for that kind of information. And I try to seek out reputable sources, but I don’t have to be real picky about where that information is coming from because if they say something that’s wrong, there probably aren’t going to be any serious real-world consequences for me. But then, the closer those sources start to veer toward actually giving self-defense advice, suddenly the stakes are much higher and at some point we have to ask, “why is this guy qualified to be telling how to protect myself?”

So for example, anybody can go out and buy a gun, snap some photos, and write an article about their first impressions, and that may or may not be helpful information. But then when they say something like “I chose the option with night sights because that’s essential for any concealed carry gun” they are now implying that they are qualified to offer their opinion on using a gun as a tool of deadly force. And that is a bold claim to make, even though we don’t usually think of simple gun reviews in terms quite that explicitly.

That example is fairly innocuous, but there are plenty of people out who push it much further than that who will tell you what kind of gun you need to carry, when you need to carry it, how to shoot it, and what kind of threats you need to prepare for. And they will tell you all of that without citing any sources and without having had any relevant training or experience. But if the guy’s got a few thousand followers online and he can throw around some big words like “gross motor skills” or “bore axis”, then all of a sudden, he can pass himself off as some kind of authority on the topic. And that’s really frustrating for people who are making an effort to put out reliable information and also for consumers who are doing their best to figure out which sources they can actually depend on.

It’s not always easy to tell when someone is qualified to be talking about self-defense, especially if you’re new to all of this. There are a few clues that I use when I’m trying to determine whether I’m going to trust a certain source.

You can start with the basics like professional background because most people will be pretty up front about that. Law enforcement or military experience can be relevant and a lot of the guys that I’ve learned from the most have had distinguished careers as cops or soldiers. But you also have to be careful here because those professions don’t necessarily imply that they understand what the armed citizen needs to know.  Carrying a rifle into combat with armor and air support is a lot different from being attacked by a knife-wielding crack-head in the Wal-Mart parking lot. So I tend to be pretty skeptical if someone’s sole qualification is just the mere fact that they were in the military or have law enforcement experience– that by itself doesn’t tell us what kind of actual experience or training they’ve had.

When someone’s got a background as a competitive shooter, that’s kind of convenient because there is already some objective measurement in place. If they actually know how to shoot, then they will have had some success in matches and that by itself lends some credibility. Competition guys often give us some of the best information available on the purely technical aspects of shooting. But again, context is important, and the lessons we can learn from shooting matches don’t always carry over into the self-defense world, especially if we’re talking about gear selection or which specific skills to emphasize in our training.

Another thing to look for in someone who’s putting out self-defense information is what do other knowledgeable people think of them? Are there any reputable sources talking about their stuff or linking to them and saying “Hey, listen to this guy.” And if they’re not all that well-known, that’s not necessarily a problem, just flip that question around. Are they saying things that tend to echo and support other well-regarded advice? Of course, even the most qualified experts don’t agree on everything, but if somebody’s got some kind of rogue opinion and giving advice that’s sort of out of left field that’s not being validated by anybody else in the self-defense community, that’s usually a pretty big red flag. So really, it helps to look at several different sources, and eventually you will start to notice a good deal of overlap between the people who seem to know what they’re talking about, even if they’re not explicitly referencing each other by name.

So if you’ve been paying attention, at this point you should probably be asking why am I qualified to be offering any self-defense advice. I don’t have any experience with military or law enforcement and I have never really been a serious competitor. In fact, I’m not any kind of self-defense expert at all, but what I have done is made it a priority to learn as much as I can from people who are experts.

Over the last few years I have spent hundreds of hours training with dozens of different instructors to learn things like how to shoot like your life depends on it, and how to teach other people how to shoot, and even some less popular topics like how to de-escalate conflict and how to recognize dangerous situations so you don’t have to use your gun. There is a list of most of the guys I’ve trained with on my bio page on our blog. I usually try to keep that up to date and I will leave a link to that in the video description.

I’m not trying to make some big deal out of my training resume, I just want to get across the fact that almost nothing I say here is just something I’ve made up myself. It’s usually little pieces of things that I have learned from people who are actually experts that I have been able to verify through my own experience and observation and then repackage into little bite-sized internet video nuggets.

I also, thankfully, have the advantage that I don’t have any advertisers to answer to. Lucky Gunner pays me to do this, There are no other donors or sponsors that we have to keep happy. It’s a pretty straightforward arrangement — if you like the content that we’re putting out, we’re hoping that the next time you need to buy ammo, you will go to LuckyGunner.com to get it. That’s not to say that people who have advertisers are automatically biased. I don’t think that’s usually the case at all, but I know that’s a concern a lot of people have when they’re considering a source’s credibility and fortunately, that’s something we just don’t have to deal with.

Okay, that is enough about me, hopefully for a while. Be sure to check out today’s blog post for a list of some of my favorite online self-defense resources. Next time, I promise we will talk more about guns. 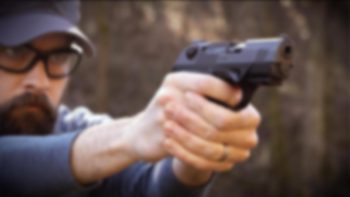 Whether you’re a competitive shooter, hunter, or collector, I think there’s always an element of evolution in all of our...