Evolution of the Defensive Shotgun

In my last defensive shotgun article, I discussed some of the advantages that the defensive shotgun platform holds over handguns and rifles. That’s all well and good, but if we’re going to have a proper examination of defnsive shotguns, we’ll need to identify which aspects of a shotgun make it ideal for fighting, rather than for hunting or competition. A great way to do this is to examine how defensive shotguns have evolved over time in order to respond to different threats and situations.

The shotgun’s roots extend way back. In fact, the concept of shooting multiple projectiles in order to cause a greater area of damage or to increase the likelihood of a hit is as old as firearms themselves. Muzzle loading small arms loaded with shot were often used in centuries past as weapons of war, and even cannons were sometimes loaded with so-called “grapeshot” for use against massed troops. The defensive shotgun as we know it today first took shape in the old west.

It’s easy to think of the shotgun as a large and cumbersome weapon, but these big-bore powerhouses can, and should, be quite maneuverable, and the earliest uses of the modern shotgun demonstrate this. With relatively little law-enforcement infrastructure in the old West territories, bandits were a very real threat to those moving precious cargo. Naturally, armed guards were used as a deterrent, and the primary choice of firearm of these guards was a compact double-barrel 12 gauge shotgun. The “coach gun”, as they began to be called, was the choice for protection on these dangerous runs. 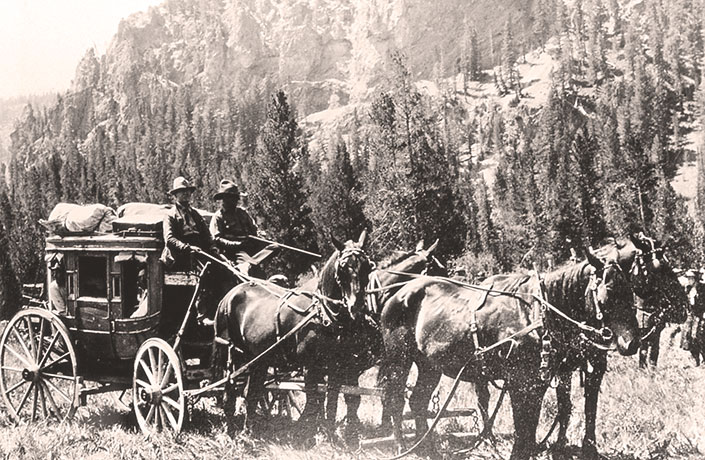 The use of a shotgun loaded with buckshot was not only devastating, but it meant hitting targets from a moving coach was much easier than with a rifle or revolver; and although the barrels were often sawed off to 20 inches or less, it wasn’t so the guns would shoot a wider pattern. The short barrels were actually preferred because they allowed the shotguns to be maneuvered easily within and around the stagecoach. This sacrificed a great deal of pointability usually desired for shotguns but had little effect on the power or spread.

Of course, the heavy-hitting shotgun was preferred by more than just coach guards, and the scatter gun played a key role in many famous shootouts. During the OK Corral shootout, Doc Holliday fired what many suspect was the initial blast of the encounter, sending buckshot into the chest of Tom McLaury and killing him on the spot. Wyatt Earp, another participant of the OK Corral shootout, reportedly used a 10 gauge double-barrel to kill Curly Bill Brocious in a different gun fight with rather gruesome effect. While fine Colt revolvers and Winchester lever-action rifles would become the more romanticized weapons of the era, nothing seemed to make people deader than a coach gun.

Quick to Fire and Quick to Load

Coach guns were largely made obsolete with the development of repeating shotguns such as the pump-action. The pump-action shotgun made substantial advancements over the earlier double-barreled coach gun by increasing shot capacity and streamlining the reloading process. While coach guns held only 2 shots and left their operator vulnerable during reloading, the pump-action made it possible to fire several shots and still be able to top off the magazine with a shell in the chamber ready to be fired if the need suddenly arose. One such pump-action, the Winchester 1897, went on to distinguish itself on the battlefields of WWI with its ability to quickly sweep a trench clear of the enemy. 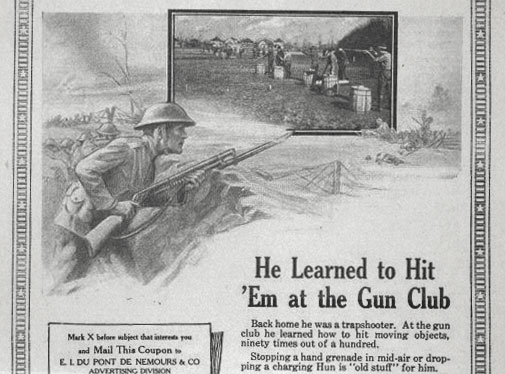 The trench warfare of the time provided near-ideal circumstances for shotgun use in a combat environment, both offensively and defensively. The 20-inch barreled shotgun was much more maneuverable in tight quarters and could fire substantially faster than the bolt-action rifles used at the time, particularly since the 1897 was capable of being “slam-fired” — if the user kept the trigger depressed after firing the initial shot, it would fire again immediately after the next shell was loaded into the chamber by running the slide-action or “pump”. When used to defend a trench line against an attack, a barrage of buckshot from several shotguns could totally overwhelm charging infantry, and some sources suggest shotgunners were able to destroy or deflect hand grenades in mid-air if necessary.

The Absolutely Reliable King of the Short Range Gunfight

Shotguns remained in military use following WWI, but they were used only in fairly limited roles such as perimeter guard duty. However, when U.S. Marines began taking the fight to the Japanese in WWII, and later when U.S. forces were sent to Vietnam, the shotgun once again saw frontline service. The jungle environments associated with these conflicts meant that visibility was often limited and attacks could come from almost anywhere. The shotgun became favored by some for its ability to lay down heavy close-range fire in the event of an ambush. Six rounds of 00 buckshot could be fired in just a few seconds, sending over fifty individual projectiles into the direction of an attack to kill, wound, or suppress the enemy and allow for a retreat or counterattack. The fighting shotgun had not evolved much since the First World War, but its use in jungle conflicts substantiated its role as a reliable and fearsome short-range powerhouse even when contending with submachine guns and assault rifles.

Despite its use by relatively small numbers of troops in recent conflicts, the shotgun remains a staple element of the police cruiser. While the combat shotgun remained relatively unchanged since the late 1800’s, the last couple of decades have brought with them some substantial improvements to the platform, and many of them can be attributed to the shotgun’s role in law enforcement. These advancements are particularly applicable in home defense scenarios because many of the employment considerations of law enforcement shotgun use are the same as those of a homeowner.

For instance, receiver-mounted side-saddles and buttstock-mounted shell carriers for quick access to extra ammo have become a commonplace and common sense additions to defensive shotguns despite being absent through much of the shotgun’s military use. Police, much like ordinary citizens, rarely respond to a threat while wearing ammunition pouches the way that military personnel do, and carrying spare ammo on the shotgun itself provides the user with potentially life-saving extra ammo without the need to wear specialized gear.

Another crucial improvement to the defensive shotgun is an attached weapon light. Neither police nor civilians can afford to cause collateral damage and both are likely to deal with much more complex scenarios than a soldier. Someone sneaking up to a military patrol at night certainly has the intention of doing mortal harm; however, someone sneaking around a house at night could be a burglar just as easily as they could be the homeowner’s son sneaking back in after a night out. The consequences of misjudging these situations are grave, and so measures must be taken to positively identify the existence and nature of a threat, and a weapon light allows for just that.

Sights have also become an increasingly common feature of service shotguns depending on their users and how they’re expected to be employed. A visit to your local trap range will tell you that neither iron or electronic sights are strictly necessary on a shotgun, but they are a useful tool. A reasonably compact and rugged red-dot optic can substantially aid in low-light shooting and any sort of sight arrangement beyond the standard front bead is going to allow for much more precision overall, especially while using slugs.

At its core, the defensive shotgun represents to best way to deliver fight-stopping energy as quickly as possible at close range where seconds really count. Any shotgun can potentially be used defensively, but the purpose-built defensive shotgun has a form much different from the traditional bird gun kept in the back of the closet. It is short and light so that indoors it can be responsive and easy to wield. Whether or not the shotgun fires the first shot of a gunfight, it must be able to fire the last, and so the defensive shotgun is magazine-fed, loaded with enough shells to solve the problems it’s likely to encounter. The defensive shotgun exists because it is the king of the short range gunfight, especially when loaded with effective ammo designed tap into its full potential. And where necessary, the defensive shotgun employs modern accessories in order to meet the needs of the situation in which it is employed.

Let us know your thoughts on fighting shotguns and be sure to check back in the coming weeks as we tackle more defensive shotgun topics!

In our ongoing series on defensive shotguns, the topic of buckshot will likely come up frequently. For centuries, buckshot has been...