It’s part 3 of our series on Pocket Pistols! If you’re just now joining us you might want to check out Part 1 for some context. Later on in the series, we’ll get deeper into aspects like shooting techniques and carry methods, but for now we’re focusing the different hardware options available. Today, it’s all about the caliber everyone loves to hate: the humble .25 ACP. Details in the video below, or scroll down and read the full transcript.

As our pocket pistol series continues, we’re going to start looking at the pros and cons of individual calibers, how to get the most out of them, and some of the guns and ammo choices available for those calibers.

We’re starting with .25 ACP. More than any other cartridge, the .25 is derided as a prime example of an under-powered caliber that’s inadequate for self-defense. On the flip side, advocates of small caliber handguns always have some story about a little old lady dropping a 300-pound thugasaurus on PCP with a single shot from her .25-caliber purse gun. But there are a lot of other factors to consider when we’re evaluating a self-defense cartridge besides just terminal ballistics.

The main advantage of the .25 ACP is that pistols chambered for this cartridge can be smaller than any other semi-autos. That’s the very reason John Browning developed it back in 1905. It was designed to have the same ballistics as a .22 LR fired from a short barrel but without the reliability issues associated with rimfire ammo.

Micro-sized .25 caliber semi-autos were popular for most of the 20th century, but that popularity had faded by the 80s and 90s. Today, there are hardly any handguns still in production chambered for .25 ACP. But there is still enough demand for the ammo that every major ammo company makes at least one .25 ACP target load and there are even premium hollow points available from companies like Speer and Hornady.

When we think of a pocket pistol now, most of us imagine a .380 like this Smith & Wesson Bodyguard. These guns are incredibly small and lightweight, but a lot of the .25s were even smaller. For example, this Beretta 950 Jetfire fully loaded with nine rounds of .25 ACP weighs just 11.5 ounces. It’s noticeably smaller and lighter than the Bodyguard, which comes in at 14.2 ounces fully loaded with seven rounds. 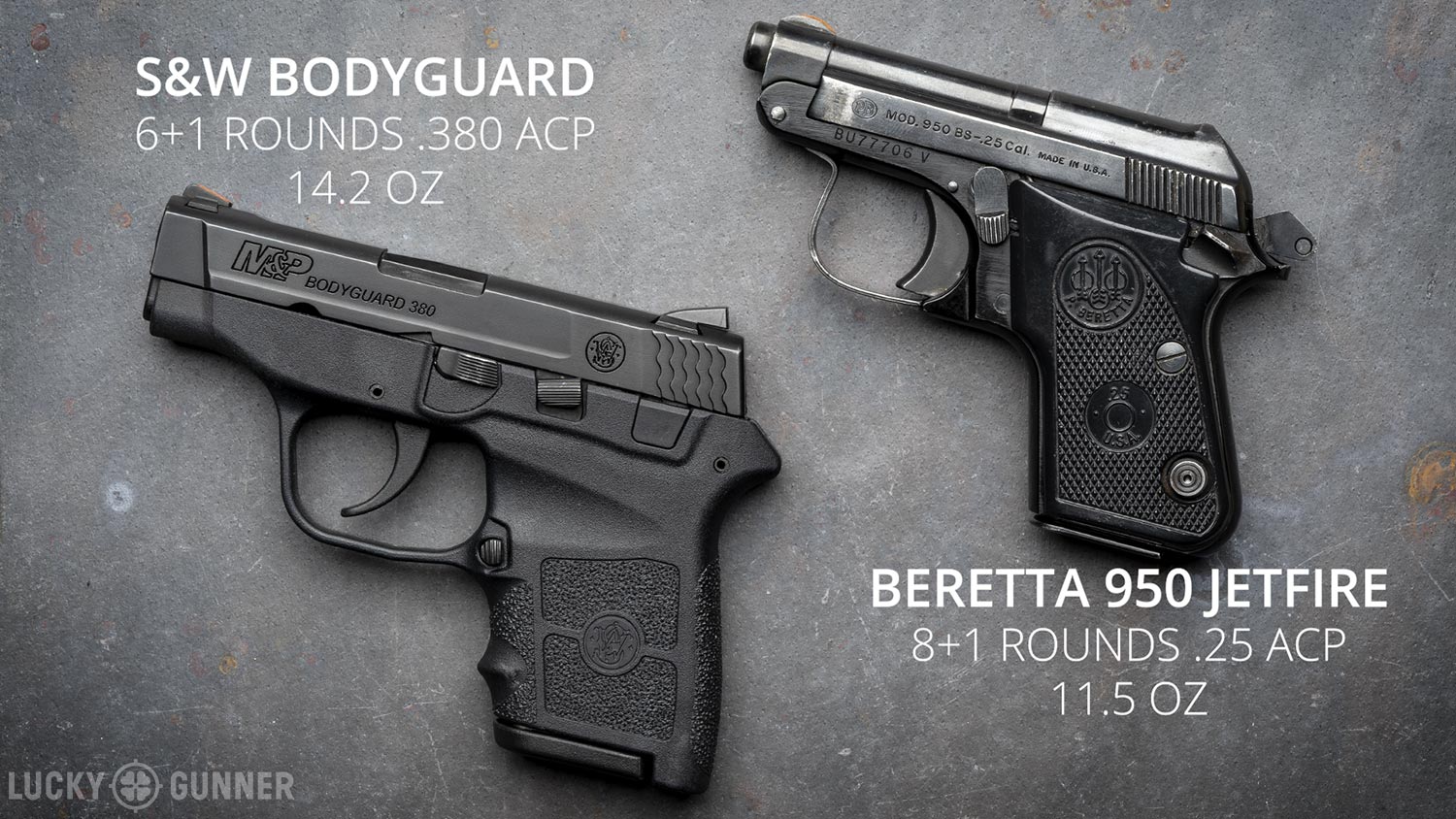 Unfortunately, using one of these little guys typically means we’re sacrificing more than just ballistic effectiveness. Because most .25 Autos are based on older designs, they have the same drawbacks common to most small pistols from that era. The sights are almost non-existent, the placement of the controls is awkward and it can be tough to get a good firing grip on the gun that doesn’t occasionally induce malfunctions. That’s the case for this Beretta, but also for the Colt 1908 Vest Pocket or the Baby Browning, or any of the other common micro-sized .25 autos.

You might not ever notice any of these issues if you’re just casually plinking at the range. But if you add time pressure to your range practice and emphasize accuracy, you will run into some challenges that you’re not as likely to have with larger handguns, or even with some of the more modern pocket pistols.

I’m going to keep using the Beretta and the Bodyguard as examples to illustrate what I’m talking about. We could look at some other models that have features these two don’t, but overall, I think they are pretty representative of their respective categories of pocket pistols.

As a quick aside, I do have to point out one unique feature of this Beretta because I think it’s really cool. It’s difficult to rack the slide on these little pistols, partly because there’s not much slide to hang on to. But with the Jetfire, you don’t actually have to do that. Instead, you just push this lever forward and the barrel pops up. Load your magazine and then manually put a round in the chamber, close it up, and you’re ready to go.

So here I’ve got a .25 with almost no recoil, a short single action trigger, and virtually no sights and a .380 with fairly snappy recoil, a long double action trigger, and in this case, a pretty decent set of sights. Which one is better for getting quick and accurate hits at typical self-defense distances? Well, that’s going to have a whole lot to do with the shooter, and the only way to really know is to do some side by side testing.

I decided to test out these two guns with the Failure Drill. That’s two shots to the body and one to the head. I used the black center of a B-8 bullseye target for my body shots, and all my head shots had to be inside a 3×5 index card. Starting from a low ready position, I ran the drill six times with each gun. The first three runs were at seven yards using a two-handed grip and the second three were at three yards, fired strong hand only. I timed each run and added a full second to my time for any hits outside the black circle or the index card. 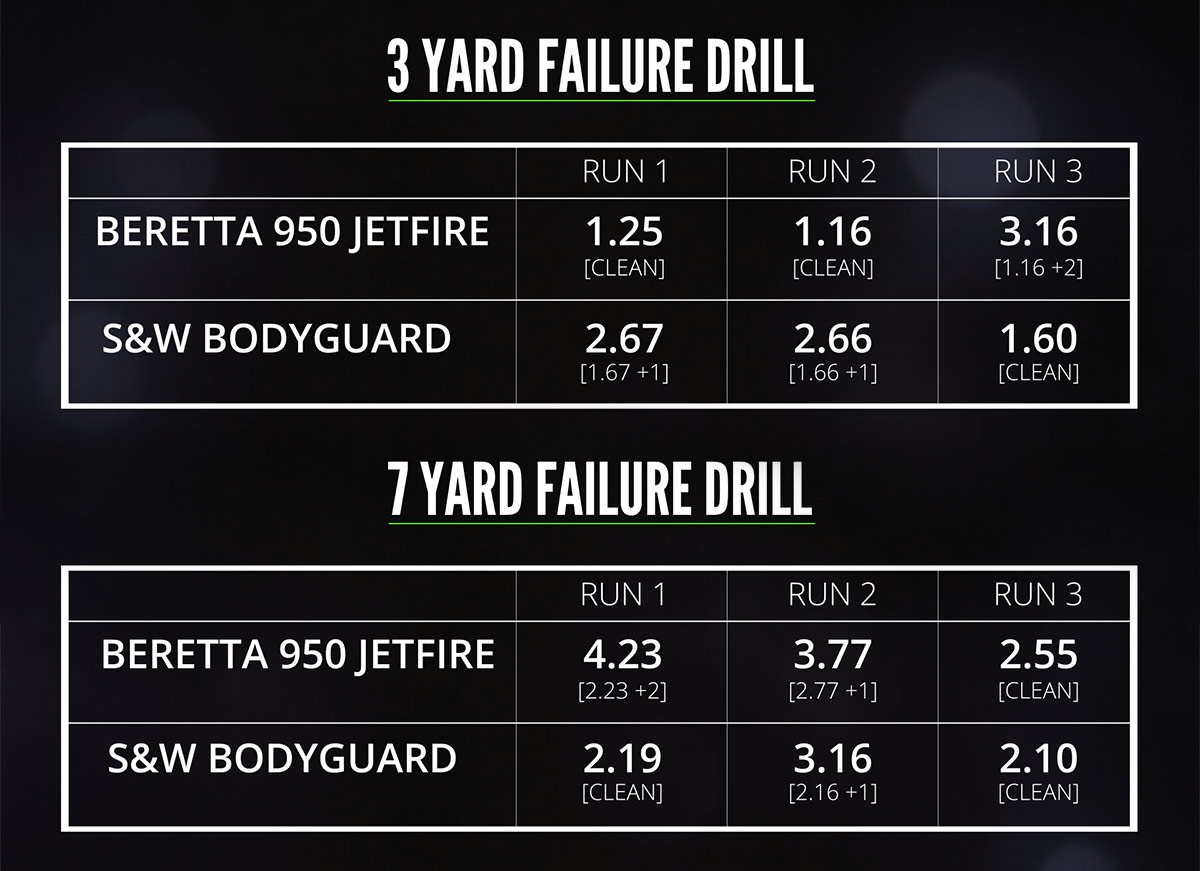 Looking at the results, at seven yards, I had a clear advantage with the Bodyguard. My raw times were slightly faster and I was more accurate. This has everything to do with the sights. Here’s the sight picture I had with the Beretta. Even with a little neon orange nail polish added to the front sight blade, it’s really hard to find it inside the tiny rear notch in any kind of hurry. Compare that to the sight picture on the Bodyguard, which is much easier to see, and gave me a lot more confidence about where my shots were going.

At three yards, the sights offered less of an advantage. This time, I was faster and more accurate with the Beretta. With only one hand on the gun, the low recoil of the .25 and the short single action trigger gave me a speed advantage of almost half a second. But, I also found it tempting to go too fast with this gun and I missed two of my three shots on the last run.

So what I learned from this little exercise is that for me, based on performance alone, it would make more sense to carry the Bodyguard. With a little practice, I could improve my ability to manage the recoil and run the trigger on the Bodyguard. I believe that would require a lot less effort than learning to accurately point shoot with the Beretta Jetfire. 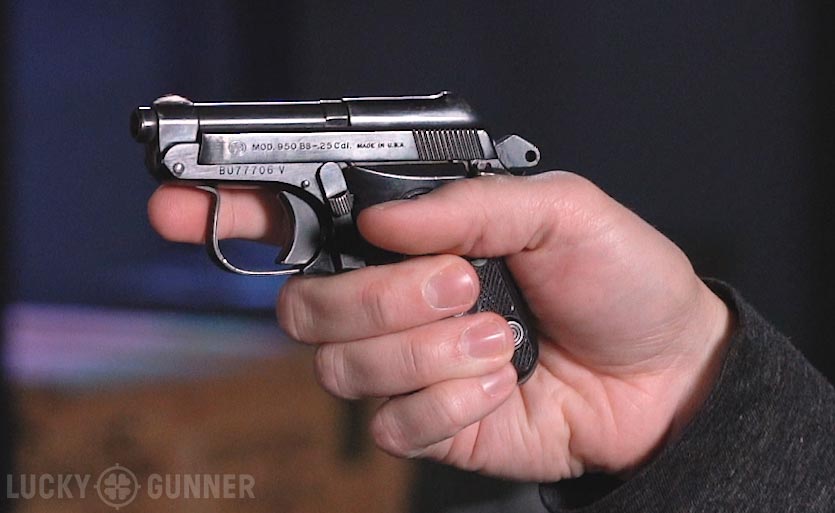 Before I shot the test, I also found that with the Beretta, if I gripped it in a way so that I could quickly disengage the safety, my hand was too high on the backstrap and I would get slide bite, and sometimes even prevent the slide from moving which would cause a failure to feed. And if my thumb was in the wrong place, I would occasionally engage the safety unintentionally in the middle of a string of fire. I don’t have particularly large hands, but for me, there is just not enough real estate on here for a gun with a manual safety.

Of course, everyone’s hands are different and every .25 caliber pistol is a little different in terms of grip dimensions and placement of the controls. But these are the kinds of issues people tend to run into when they try to use these really small guns and they are issues worth considering before you carry one.

At the beginning, I said I didn’t want to limit the evaluation of this cartridge to its terminal ballistic performance alone, but I did run a couple of quick ballistic gel tests with our heavy clothing barrier to see how it would compare to the FBI standard.

First, I tried the 35 grain Speer Gold Dot. The average penetration depth was just 8.4 inches. Remember, ideally, we want at least 12 inches of penetration in gel — that correlates with good real world performance. Four out of the five rounds did expand a little bit, but that’s not really helpful if we don’t get decent penetration. This kind of performance is pretty typical for small caliber hollow points. If we use a bullet that expands, we sacrifice penetration. So it’s actually better to go with a non-expanding full metal jacket load in a lot of these pocket gun calibers. 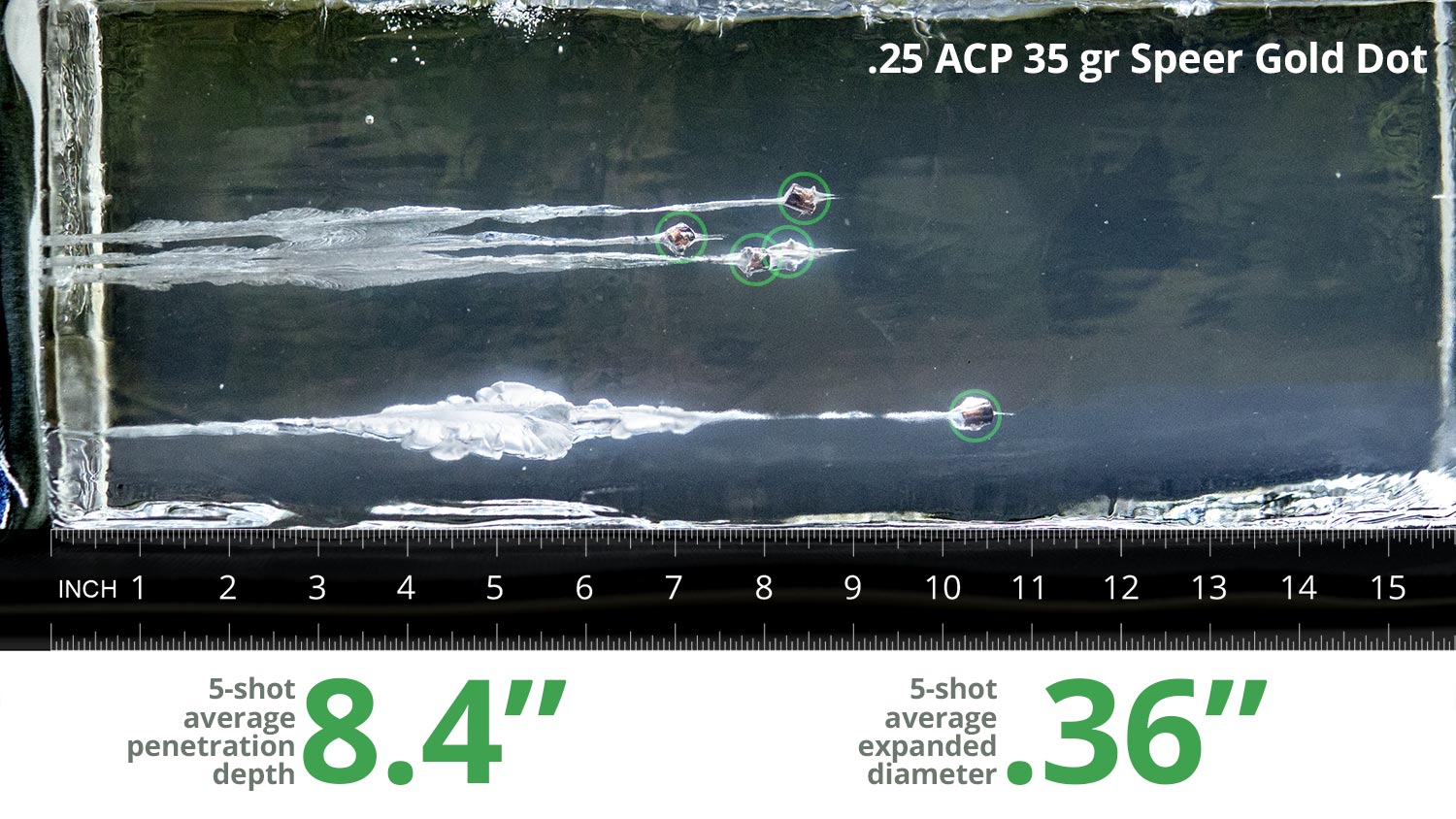 When I tested the American Eagle 50 grain full metal jacket, the average depth was 12.3 inches. One of the five bullets stopped there at 8-inches. It looks like it intersected with some of the disrupted gel from another bullet’s wound channel, so that’s kind of a fluke. But otherwise, the penetration here was surprisingly good. 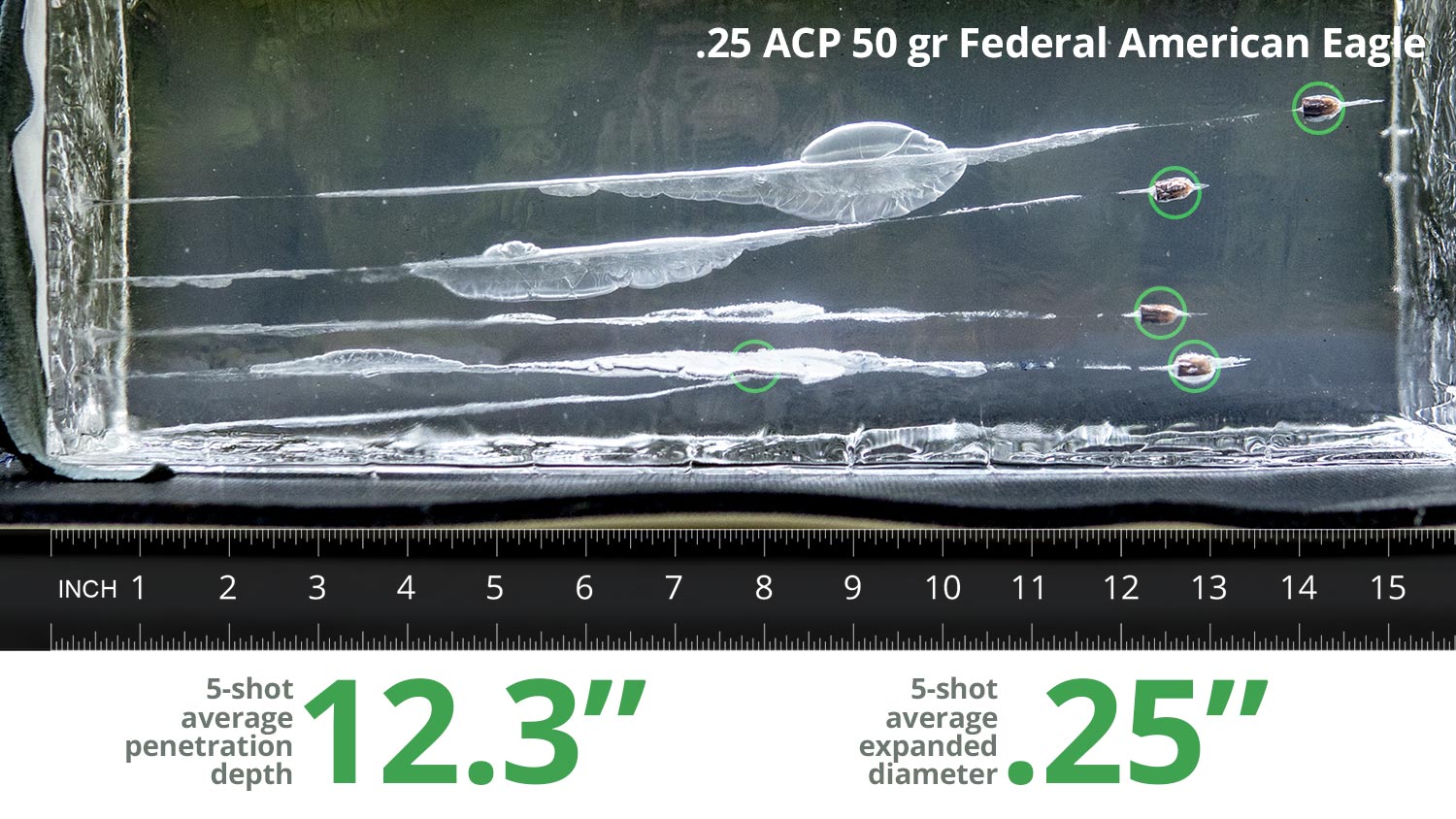 So in theory, .25 ACP should be able to penetrate adequately in tissue, but I’ve also heard of several instances where a .25 was not effective because it was unable to penetrate through bone.

There’s actually data that seems to support this. A few years ago, Greg Ellifritz published his excellent Stopping Power study based on stats he collected from almost 1800 real world shootings. Of the people who were shot with a .25 ACP, 35% of them were not incapacitated, no matter how many times they were hit. With the ballistically similar .22, that number was 31%. So, according to Greg’s study, about a third of the people shot with a .25 or a .22 did not immediately change their behavior. Now, compare that to the larger calibers: .380 ACP, .38 Special, 9mm, .40 S&W, and .45 ACP all had between 13-17% failures to incapacitate. So if we ignore all other context and assume for a minute that caliber is the only variable that matters, it looks like a .22 or a .25 fails to disable twice as often as calibers of .380 and up. 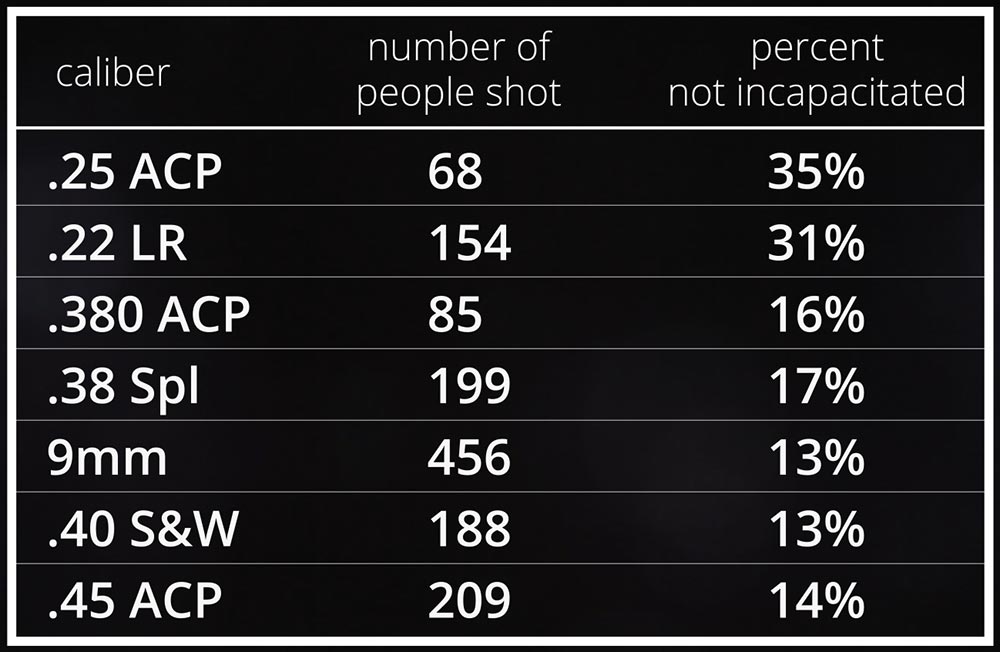 So does that mean .25 ACP deserves its reputation as one of the worst calibers ever? I don’t think so because in reality, context does matter. Personally, if I was limited to carrying a gun with marginal ballistic potential, I would at least want it to be easier to shoot accurately than the typical .25 semi-auto. But for those situations when you have to have the absolute smallest gun possible with as little recoil as possible, it’s hard to beat a .25 ACP.