Back in June, I wrote a post all about my search for the ideal compact 22 pistol that I could pair with my new Silencerco Sparrow rimfire suppressor. Not particularly satisfied with any of the current production options, I ended up with the now-discontinued and rather obscure S&W Model 2213. I’ve had some more trigger time with the pistol since writing that post, and it’s… okay. Still not quite scratching the compact 22 itch, though.

It turns out that what I was really looking for wasn’t officially released for another couple of months: the Smith & Wesson M&P 22 Compact. When I first heard about this pistol, I wasn’t particularly interested. I have handled the full size M&P 22 that came out a couple of years ago, and wasn’t very impressed. The trigger isn’t very good, and it has that “toy-like” feel that I’ve complained about in other 22 pistol reviews. Not surprisingly, production of the full size M&P was contracted out to Walther, whose 22 pistols don’t have the greatest reputation for being especially robust. 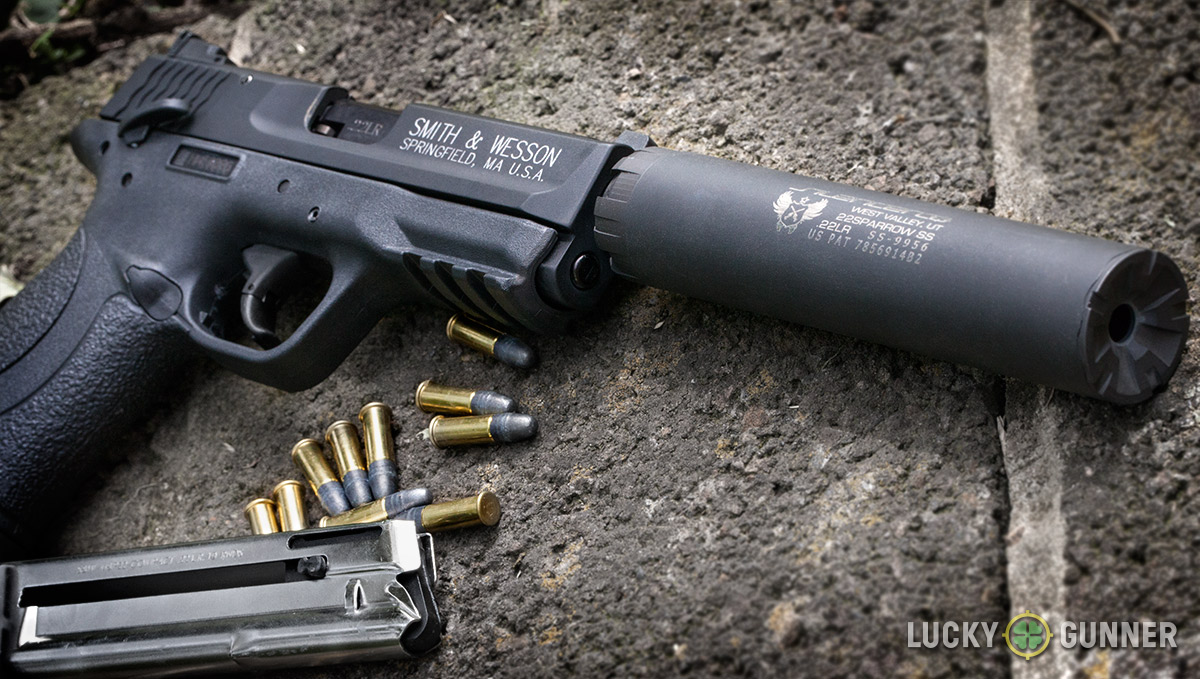 Conversely, the new M&P 22 Compact is being produced in-house by Smith & Wesson, and features a durable aluminum slide. That got my attention. If you’ve seen many of the previous videos here on the Lounge, you’ve probably noticed that I’m a big fan of the full size and compact 9mm M&P pistols, so I’m quite at home with the controls and layout of the M&P series. I could really get used to a compact 22 M&P if it’s as good as its centerfire cousins. So let’s see what we’ve got…

The Smith & Wesson M&P 22 Compact Out of the Box

Like most .22 LR pistols, the M&P 22 Compact fires from 10-round magazines, two of which are included with the gun. It lacks the interchangeable backstraps of the rest of the double-stack centerfire M&P pistols, but that detail is far less critical on a light recoiling rimfire.

Sights are the bland painted white three-dot variety, but the rear is fully adjustable for elevation and windage, which is always nice to see on a 22. I plan on blacking out the rear dots, and I may replace the front sight with a red fiber optic sight from Dawson Precision. If not, I’ll most likely take advantage of the front accessory rail and try equipping it with one of the little Crimson Trace Railmaster lasers because… “pew pew” laser beamz!

Speaking of “pew pew”, the M&P 22 Compact comes from the factory with a threaded muzzle, covered by a barrel cap. This fact could be easily missed if you weren’t looking for it because Smith & Wesson failed to include any mention of the threaded barrel in the owner’s manual, nor did they provide the appropriate sized wrench to remove the barrel cap. After much cursing and gnashing of teeth, I eventually managed to wrestle the cap loose by modifying a small wrench that I had from another threaded pistol.

You might notice that I didn’t include any closeup photos of the barrel cap, and that’s because it’s not exactly photogenic after what I had to do to remove it. It has since been replaced with a thread adapter, which is required if you want to attach a suppressor or other muzzle device. I ordered mine from EWK Arms to extend and convert the M&P’s 3/8”x24 threads to the standard like 1/2”x28.

Interestingly, Smith & Wesson’s M&P 22 compact is not the same form factor as the compact centerfire M&Ps. The original compacts share the same dimensions as the full size M&P, only with shorter barrel/slide, and shorter grip. The 22 compact, on the other hand, has the same proportions as the full size, but reduced in size by 15%. The end result is a pistol that’s much closer in size and feel to the single stack M&P Shield than to any other M&P offering. At 15.3 ounces, it’s a bit lighter than the Shield’s 19 ounces, and I actually wish it were a few ounces heavier to aid in keeping the sights steady for those longer shots.

That said, I like the size overall. It’s small enough to be usable by people with very small hands, but the grip is long enough for the average person to get all their fingers on board. The 3.56-inch barrel is long enough to provide a decent sight radius, but not too long in proportion to its light weight. 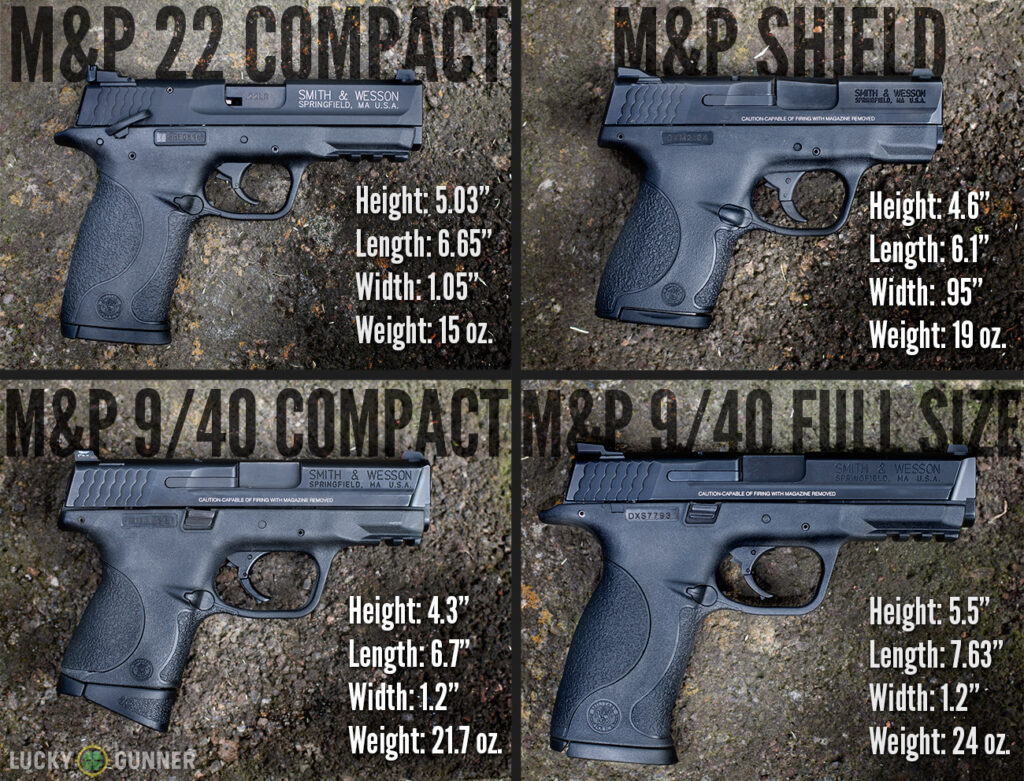 I’m not sure why rimfire pistols always seem overburdened with unnecessary safety mechanisms, but the M&P 22 compact is no exception. It has an ambidextrous manual thumb safety patterned after the optional thumb safety found on the standard M&P pistols. It’s large, easy to use, and unobtrusive, especially if you’re used to 1911-style thumb safeties.

That one’s not really a problem. The safeties I object to are the magazine disconnect safety and the internal safety “lock” that uses a small key to disable the pistol. I’ve already expressed my thoughts on the S&W internal revolver lock, and I can’t think of any reason it would be any more desirable on a semi-auto. As for the magazine disconnect, I think it actually makes the gun less safe. If I’m going to dry fire the pistol for practice, I don’t want a magazine in the gun if at all possible. Requiring the magazine to be present only serves to offer one more opportunity for a round to inadvertently end up in the chamber when it should be empty. But, you know… lawyers and stuff.

M&P 22 Compact at the Range

Okay, lame safety features aside, I still think the M&P 22 Compact is a great little plinker, which was confirmed after taking it to the range. The trigger breaks at about 6 lbs, which is on par with the more recent and much improved centerfire M&P triggers. When handling and shooting the 22 Compact, it just feels like an M&P, despite being a slightly different size than any of the existing pistols in the series. Accuracy wasn’t too bad, either. Like I said in the Sig P938-22 review, these lightweight compact .22 LR pistols aren’t a replacement for the more traditional target pistols, but for what its worth, I didn’t have any trouble shooting inch-sized groups at 20 yards using match grade ammo and a bench rest.

When using the M&P 22 Compact as a self-defense training tool, my one complaint is the slide lock lever. Lefties will notice right away that it’s not ambidextrous like the original M&P pistols, but even as a right-handed user, I didn’t find it especially useful for reloads. The slide lock levers on my other M&P pistols were stiff at first, but they all loosened up after the first couple of hundred rounds. The lever on the 22 Compact is every bit as immovable as it was out of the box — at this point I can’t even force it down after slide lock without getting multiple fingers involved. I guess that’s just one more point for advocates of the “power stroke” reload method. 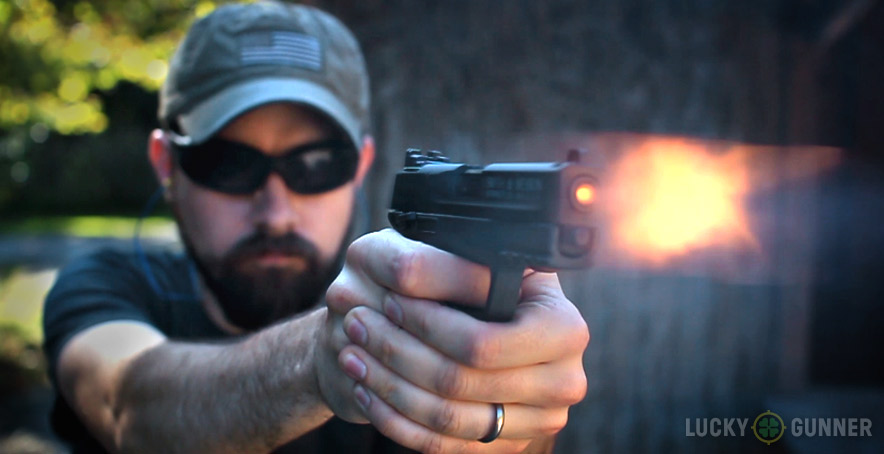 Realistically, I’m less likely to use the M&P 22 Compact as a serious training tool for myself but more likely as a fun range gun and something for new shooters to start on. That means it will most often be equipped with a suppressor which seems right at home on the M&P 22 Compact. With the Silencerco Sparrow, it sounds at least as quiet as any full-sized rimfire suppressor host I can recall. I also discovered that, at least with the loads I tried, the short barrel doesn’t give high velocity 22 ammo enough room to get the bullets up to supersonic speed, meaning that most factory ammo should stay quiet and subsonic for suppressor users.

With .22 LR still being in limited supply, I didn’t fire a dozen bricks of ammo through the little M&P for the review like I would have wanted. I did, however, manage to salvage a couple of boxes from our warehouse’s damaged-box reject inventory. I fired about 300 rounds of CCI Mini-Mags (after sorting through the shattered remnants of the little plastic CCI boxes looking for the rounds that weren’t smashed beyond recognition) followed by a few magazines worth of Federal Champion Bulk Pack lead round nose and some Eley Subsonic Hollowpoints.

Then, dipping into the supply of target-grade 22 I have squirreled away for reviews, I also tried a box each of Federal Gold Medal Ultramatch and Wolf Match Target for accuracy, both with the excellent results I mentioned earlier. With nothing more than a couple of drops of lube added to the slide rails, the M&P 22 Compact ran through more than 500 rounds right out of the box without a single malfunction to speak of — no small feat for the typical .22LR handgun.

If all this talk of 22 ammo has you jealous, Smith and Wesson is coming to the rescue. For the next couple of months, when you buy an M&P 22 Compact, you can send them your receipt and you’ll get a free 222 round box of Winchester plinking ammo to go with it. But after you burn through that and need to re-stock, just don’t forget who gave you the heads up.