If you’ve never fired a Heckler & Koch pistol with an LEM trigger, it’s kinda hard to explain. A lot of people think it’s just a light double action, but that doesn’t really do it justice. Today, we’re looking at what is really unique about the LEM trigger, as well as a brief review of the HK P30SK — the subcompact variant of what some consider to be the best pistol HK has ever made.

Details are in the video below, or you can scroll down to read the full transcript.

Hey everybody, I am Chris Baker from LuckyGunner.com. Today, I’m going to talk about the unique Heckler and Koch LEM trigger as well as the HK P30SK.

The LEM trigger is a really interesting concept that I think a lot of people misunderstand, or maybe aren’t even aware of. It’s available as an option in several HK pistols. My focus for this video will be mostly the LEM system. But a lot of you guys have asked me specifically about the P30SK, so I’ll share some thoughts on that at the end.

What is the LEM Trigger?

Since the 1990s, HK has offered multiple action configurations for each of their hammer-fired pistols. For example, if you go shopping for a P30, the most common variant you’ll run into is a double-action/single action with a decocker button on the back of the slide. You can also get that with or without a frame-mounted thumb safety. But if you look around long enough, you might also find a P30 V1. That means it has the Law Enforcement Module, or LEM trigger.

The LEM version has no safety or decocker. It’s easily mistaken for a double action only. But that’s only half true. If you just pick up the gun and pull the trigger, you’re going to get a fairly stiff 12-pound double action pull. However, when you rack the slide as if you were loading the gun, the slide pre-cocks the mainspring about halfway. That gives you a trigger with a lot of pre-travel and very little resistance followed by a clean 5 and a half pound break. 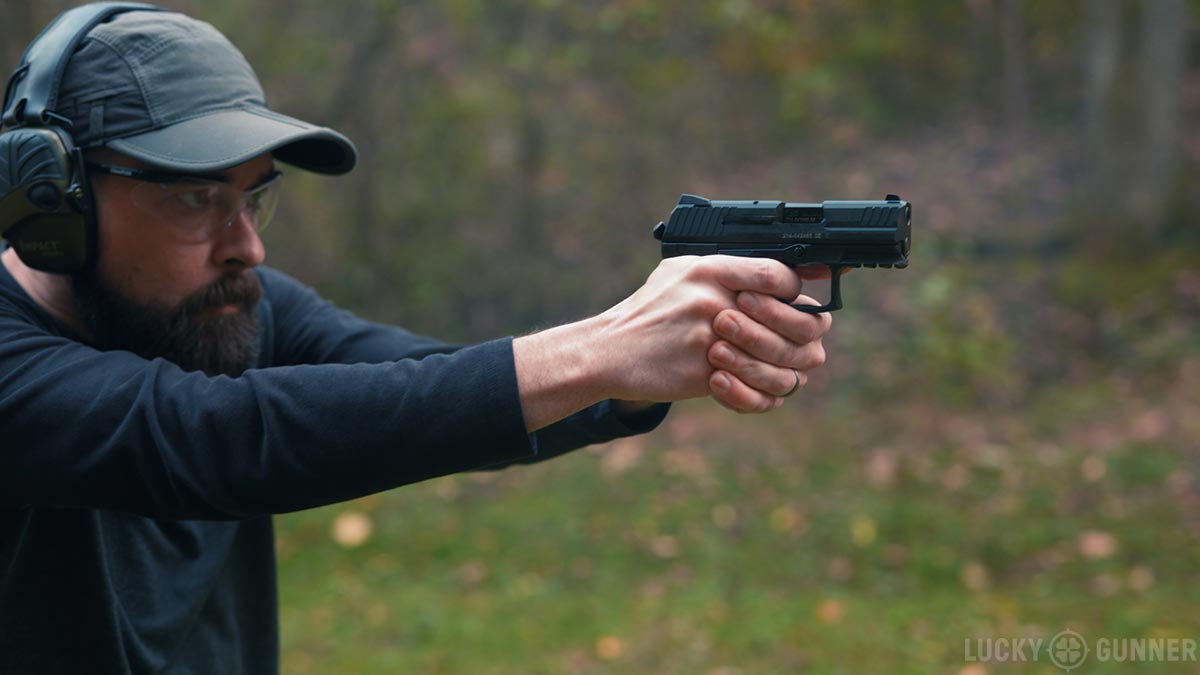 The reset point is very short, so you only have to let the trigger out a few millimeters for your next shot. The only time you actually get that 12 pound trigger pull is if you do a restrike. So if you run into a failure to fire and you want to pull the trigger to try that round again, you’ll get the full double action pull.

Shooting it feels a lot like a single action pistol with a first shot that has the length of travel of a double action, but not the weight of a double action. It’s kind of like a DA/SA for people who don’t like DA/SA. Or those who are really bad about remembering to decock. Since it’s a true hammer-fired pistol, you can pin the hammer with your thumb to disable it while you put it in the holster.

I first heard about the LEM trigger several years ago when Darryle Bolke wrote an article about it for pistol-training.com. Darryl is a big fan of LEM, especially for law enforcement. In his experience investigating and being involved in shootings, there is a lot of chaos before and after the shots are actually fired. That’s when stress often causes fingers to end up on triggers when they really shouldn’t be there.

Some use of force researchers believe the distance a trigger has to travel matters at least as much as trigger weight in mitigating stress-related unintentional discharges. The LEM trigger is not any heavier than a typical striker-fired trigger, but it’s got a lot more pre-travel for that first shot. Theoretically, that’s an added opportunity for you to think, “is this really what I want to do right now?”

As private citizens, we don’t have to do things like chase suspects with pistols in our hands. We don’t have to do a no-look holster while also trying to put handcuffs on somebody. But I think the logic of the LEM trigger still has some benefits outside of that law enforcement context. Making the trigger hard to press by accident and simultaneously easy to press on purpose is tough to pull off, mechanically speaking. In that respect, the LEM trigger is a very impressive effort.

Who is it for?

Based on my range time with this gun so far, I can see a lot of potential in the LEM trigger. But it does take some getting used to. I’ve only got about 500 rounds through the P30SK and I just now feel like I’m starting to get the hang of it. I would prefer more of a rolling trigger break, like a light double action, and a stronger reset. Apparently, both of those things are possible to achieve with the right combination of factory parts.

As it is, I still much prefer a good DA/SA. But I have a lot of trigger time with DA/SAs. They’re not for everybody. For a novice shooter, I think an LEM trigger would be a much better trigger for learning pistol basics. It’s also an ideal option for someone who likes the simplicity of striker-fired pistols, but wants the added safety of an exposed hammer.

HK offers a few versions of the LEM trigger. This pistol has the most common variant, known as the light LEM. It’s also available with a heavier weight or less pre-travel. You can get an LEM trigger on any of the P30 pistols, as well as the P2000, the HK45, and the USP series. It’s not always easy to find an LEM variant for sale, so you might have to have it specially ordered. Or, in some cases, it’s possible to convert a DA/SA pistol to LEM if you have the right parts. HKparts.net is a good resource for that stuff.

Okay, now let’s take a look at this particular gun; the HK P30SK. The original P30 came out back in 2006, but they didn’t make the SK until 2015. This is what HK considers the subcompact version of the P30. It’s a bit large for a subcompact. If you consider the Glock 26 to be the unofficial standard for a subcompact double-stack 9mm, the P30SK is taller and a bit thicker. But it’s not quite big enough to be a compact, either.

It ships with two magazines. One is flush-fitting with an optional finger extension floorplate that holds 10 rounds of 9mm. The other mag is an extended 13-rounder. Fully loaded with that mag, the P30SK weighs 31.4 ounces. That’s the same as a loaded Gen 5 Glock 19. 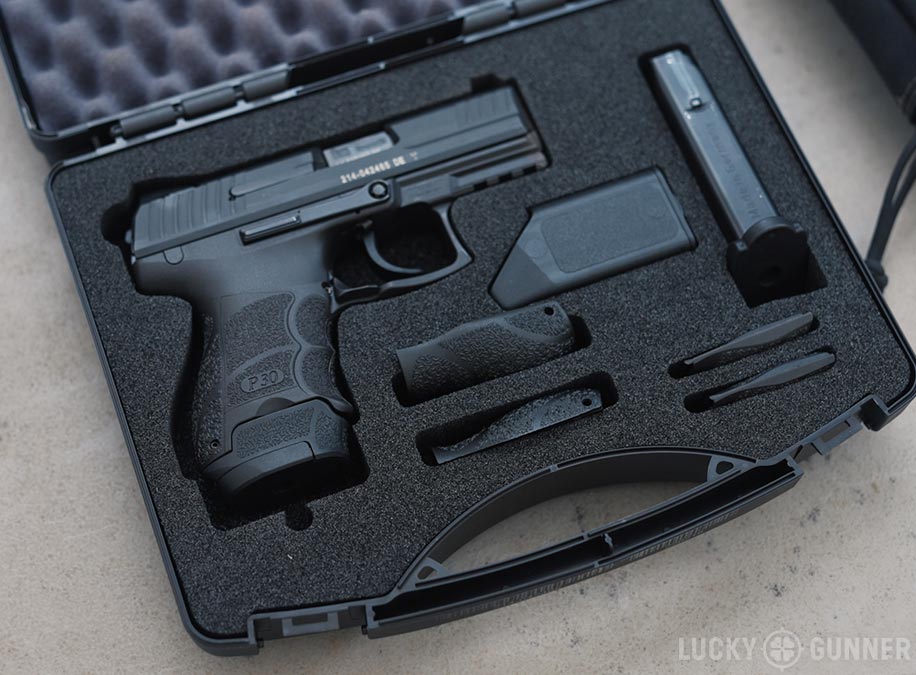 The SK has the same modular grip features as the full size P30. It comes with small, medium, and large backstraps, as well as three different size options for the right and left grip panels. The sights are decent, but pretty basic with photoluminescent dots.

The slide release and mag release are both ambidextrous. The paddle-style mag release is a somewhat unusual feature these days. Rather than a button you push in, it’s a lever that you push down to release the mag.

I don’t know if there’s much I can say about this gun that hasn’t already been said about the P30 series. Overall, the ergonomics are excellent, except that it could use a little more grip texture, especially on the upper part of the frame where the support hand makes contact. I don’t think the paddle-style mag release is the deal-breaker that some people make it out to be. However, I do have to shift my grip to reach it. That’s is something I very rarely have to do with other handguns.

The original P30 has a reputation for quality and durability that is almost unmatched among other modern polymer-framed handguns. Some consider it the pinnacle of hammer-fired duty pistol design and engineering. I don’t believe the SK has been as thoroughly vetted as the full size P30. But it’s essentially the same design with a shorter grip and a shorter slide and barrel, so I would expect similar long-term performance.

The P30SK is also one of just a handful of hammer-fired subcompact 9mms in current production. You guys know I would love to see more small hammer-fired pistols — either DA/SA or DAO, or even LEM. But by today’s standards, the P30SK is really not all that small. Chopping the grip and the barrel only gets you so far in terms of making the gun easier to conceal. We now have very slim 9mm pistols that sacrifice nothing in terms of ammo capacity and very little in terms of shootability versus a double stack. And they come from the factory with slide-mounted optic cuts. 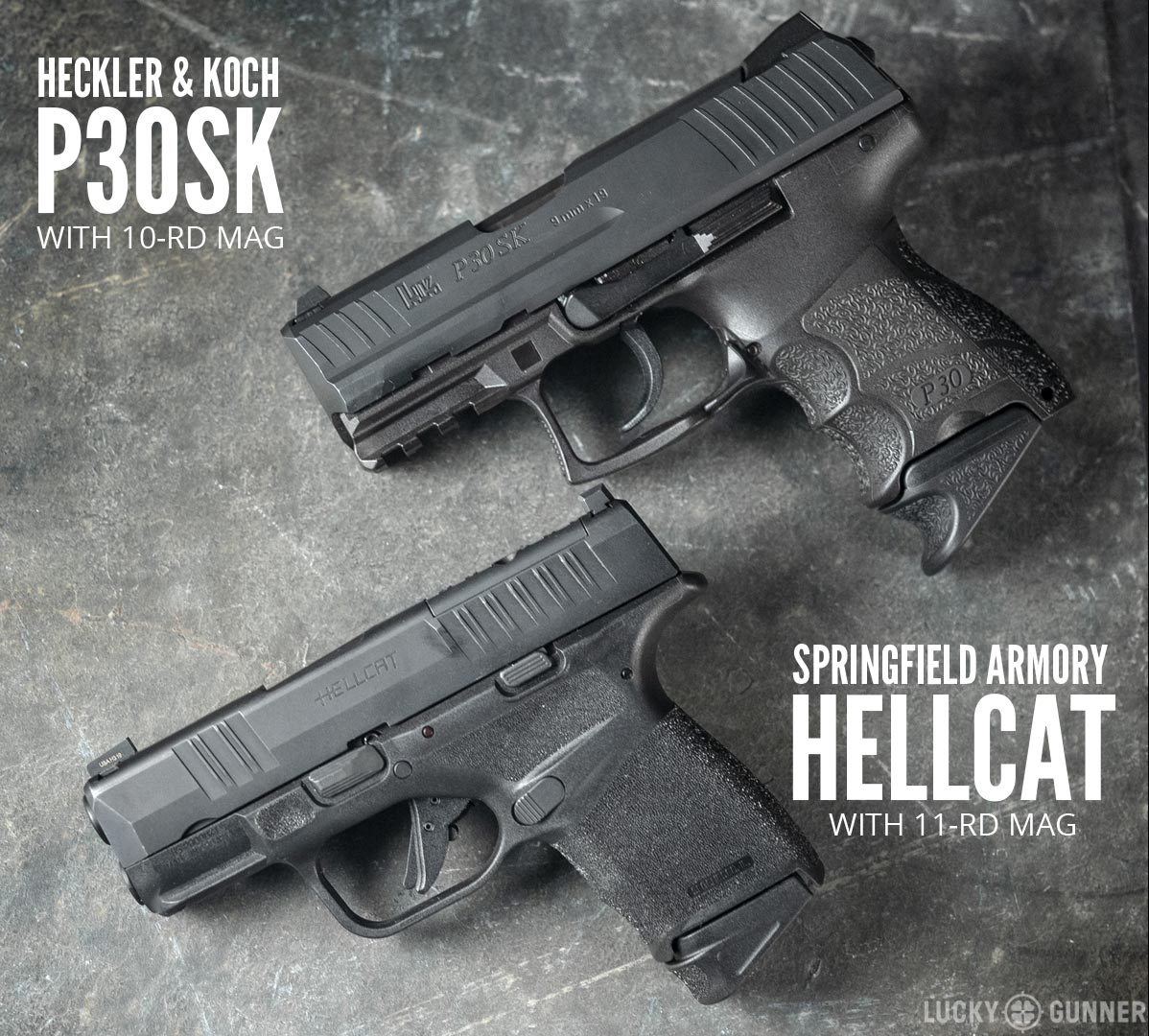 So, the P30SK is a really nice pistol. For some of you, it might be the perfect size — it’s just what you’re looking for. But considering what else is on the market for 9mm carry guns, it feels about 10 years behind the curve. That’s really no surprise since the American civilian market has never been a top priority for HK. But we’ve seen a few hints in recent years that that might be changing. I’m not holding my breath for a slim, optics-ready, LEM P30. But if they ever get around to it, I’ll be first in line to try one out.

Okay guys, that’s all I’ve got to say for now about the LEM system and the P30SK. If you found any of that helpful, hit that thumbs up button, leave us a friendly comment, or you can buy some ammo from us with lightning fast shipping at LuckyGunner.com. 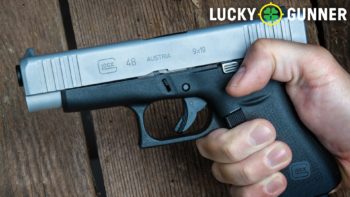 Why Blank Ammo Can Be Deadly

Today, we're looking at how blank ammunition works, why it's dangerous, and what part blanks played in three separate gun-related...