A few of years ago, I read a short blog post by Todd Green entitled “Feelings”. It was about how it’s easy to trick ourselves into believing that one particular technique or piece of gear is effective based on how it “feels” to us. Todd used the example of adding a GripForce Adapter to his Glock. The grip didn’t feel as good in his hands as the unmodified Glock, but his range performance was measurably better with it than without it. The point was that without objective methods of measurement like timers and targets, our feelings lie.

This article has really stuck with me and I’ve noticed the same bias in myself and other shooters. The grip example is not the only area where the “feelings lie” mantra applies, but it’s a common one in the shooting world. As a community, we tend to place a lot of emphasis on the way a particular handgun “feels” in our hands. That’s because if we can’t actually shoot the gun, or can’t/don’t measure and track our performance objectively, the feel of a pistol when it meets our firing hand is one of the only indications we have of whether we like the gun or not.

I appreciate that “melts into your hand” feeling of an ergonomically sound handgun grip as much as anyone, and it’s not a bad thing in itself. However, since being clued into this phenomenon, I’ve learned to downplay the importance of how a grip feels. When I first started shooting M&P pistols on a regular basis, I really thought the grip fit my hands perfectly when using the smallest of the three backstrap inserts that come with the gun. Then I tried adding a Crimson Trace Laser Grip. It felt huge in comparison, and I hated it at first. But timing some drills at the range showed virtually no change in speed or accuracy in daylight hours and, thanks to the laser, a huge improvement in dim lighting. The correlation between a grip that feels “perfect” and optimal performance on the range is inconsistent at best.

I’ve also had to alter the way I respond to people who ask my advice when shopping for a handgun. After getting an idea of the person’s situation, I used to offer a handful of suggestions and tell them to “try to handle as many as possible and just pick whichever one feels best in your hands.” But if I can’t tell whether a grip that “feels right” is actually going to work for me, how is a complete novice shooter supposed to figure it out in a gun store?

Fortunately, there are some red flags to look out for when checking out handgun grips that don’t require you to measure your performance at the range in order to rule them out. Your feelings can lead you astray, but if the gun actually prevents you from achieving a proper firing grip, then something will have to be changed, or you’ll need to try a different model. Here are a few common grip problems that can prevent you from shooting a handgun well.

It’s not just folks with small hands who have to watch out for this, though. If you have large, or even medium-sized hands, some of the controls on the smaller semi-autos can be tough to reach. It’s not uncommon for the safety lever to be placed in an awkard to reach position. You might be able to work around these issues with some practice, but in some cases, the position of the controls might be almost impossible to access if you have a good firing grip on the gun. As a personal example, I have a really hard time finding a place for my support hand on the Sig P238 where my thumb doesn’t interfere with the slide stop lever.

If you’ve had any kind of basic handgun training at all, you’ve probably seen an image like this: 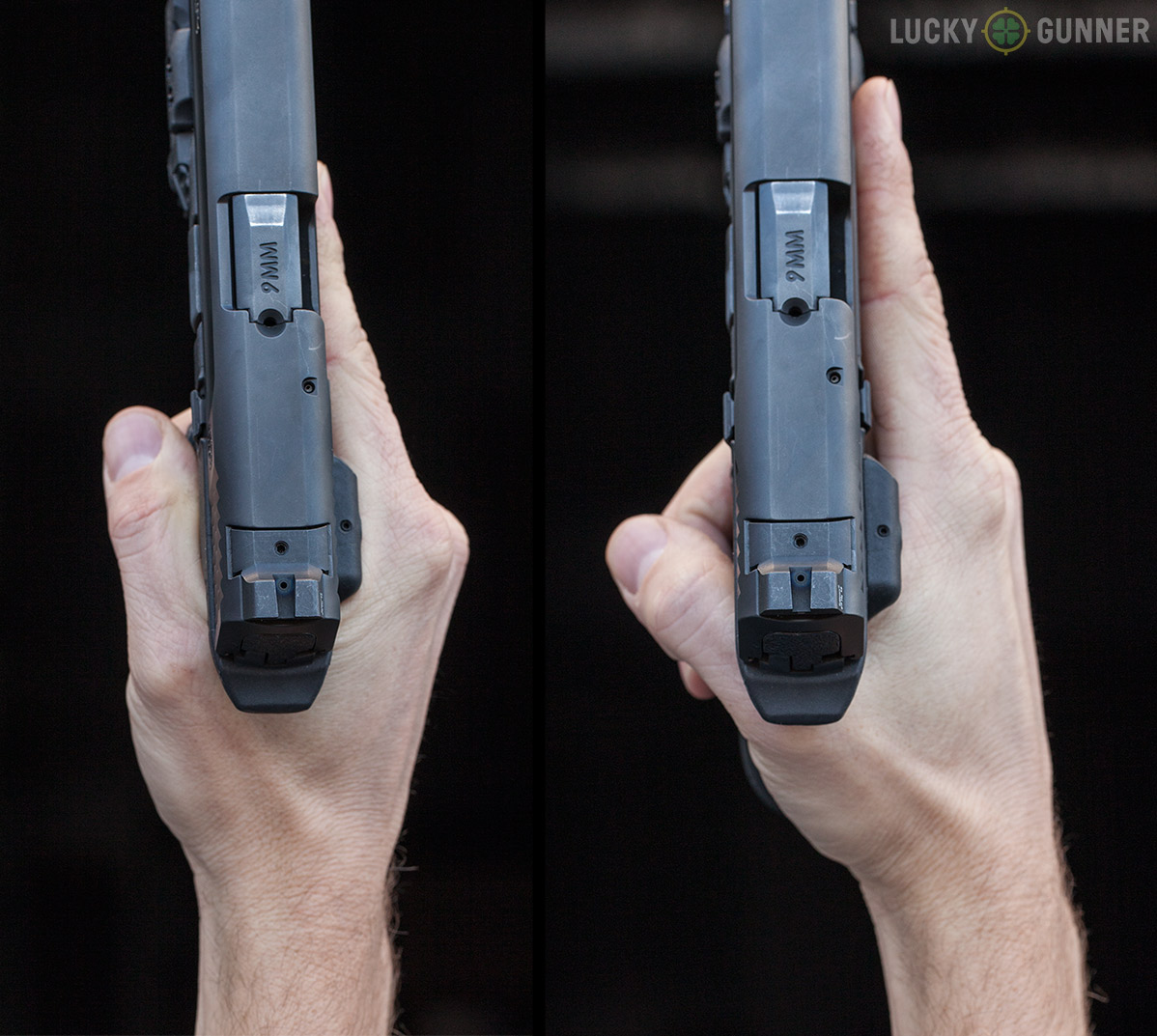 Your forearm should be in a straight line with the gun, like the image on the left. This allows the recoil to be absorbed by your arm and into your body. If the grip is too wide, you’ll be forced to shift your hand over like the image in the right. Then, gun isn’t aligned with your forearm and the recoil will go into your thumb and hand instead. Not only does this prevent adequate control, it can also be very painful. Sometimes a grip like this is simply the result of improper technique, but if the grip is too large for your hands, it will be impossible to correct without physically altering the gun or trying a different handgun model altogether.

This one usually goes along with the grip thickness issue. Sometimes the grip might not feel too large, but if you can’t get sufficient leverage on the trigger, you’ll end up shifting your grip like in the above example in an attempt to compensate.

This is an especially common problem with heavier double action triggers like revolvers and traditional double action semi-autos. In fact, I think trigger reach is one of the reasons people seem to have such a “love it or hate it” attitude toward the Beretta 92FS, which has a somewhat long trigger reach in its stock form.

For some reason, gun manufacturers love to install finger grooves on handgun grips, but serious shooters tend to shy away from them. They’re found in the form of the subtle grooves on the gen 3 and gen 4 Glocks all the way up to the massive canyon-sized grooves on the ubiquitous Hogue revolver monogrips.

Anyone can grab one of these grips and place their fingers inside the pre-formed recesses, and it might even feel pretty comfortable. But that doesn’t mean you’ll have a correct firing grip. For many people, placing their fingers in the grooves will force the hand to be too low on the grip to have sufficient control of the gun under recoil. Conversely, placing the hand in the correct position might necessitate that the fingers wrap around the ridges on the front of the grip, rather than inside the grooves. If the grooves are subtle enough, the shooter might be able to ignore this minor discomfort, but it can also cause pain or loss of control under recoil.

The effect of grip length on shooting performance can vary a lot from one gun to the next, so this one might actually require some trial and error more than the others. With semi-auto pocket guns and small revolvers equipped with short “boot grips” it’s very common for the pinky to have trouble finding a home on the grip. If the gun doesn’t recoil much, this might not be a deal breaker. The middle and ring finger are doing most of the work anyway.

That said, I still wouldn’t recommend a gun that requires this kind of grip for an inexperienced shooter. And even if you have solid technique, some of the small autos have stiff enough recoil that you’ll want as many fingers on the grip as you can get. Fortunately, magazine grip extenders and longer revolver grips are available for almost every small handgun model in current production, so it’s an easy fix.