Earlier this week, we posted the photo below on our Facebook page — that’s me holding a heavily modified Korean War-era M1 Garand. The reception was a bit more dramatic that we had expected, with dozens of comments ranging from “I want one” to those accusing me of sacrilege. These reactions reflect the wider debate over the M1 “Tanker” style Garands; a classic rifle variant with a history that’s often misunderstood. 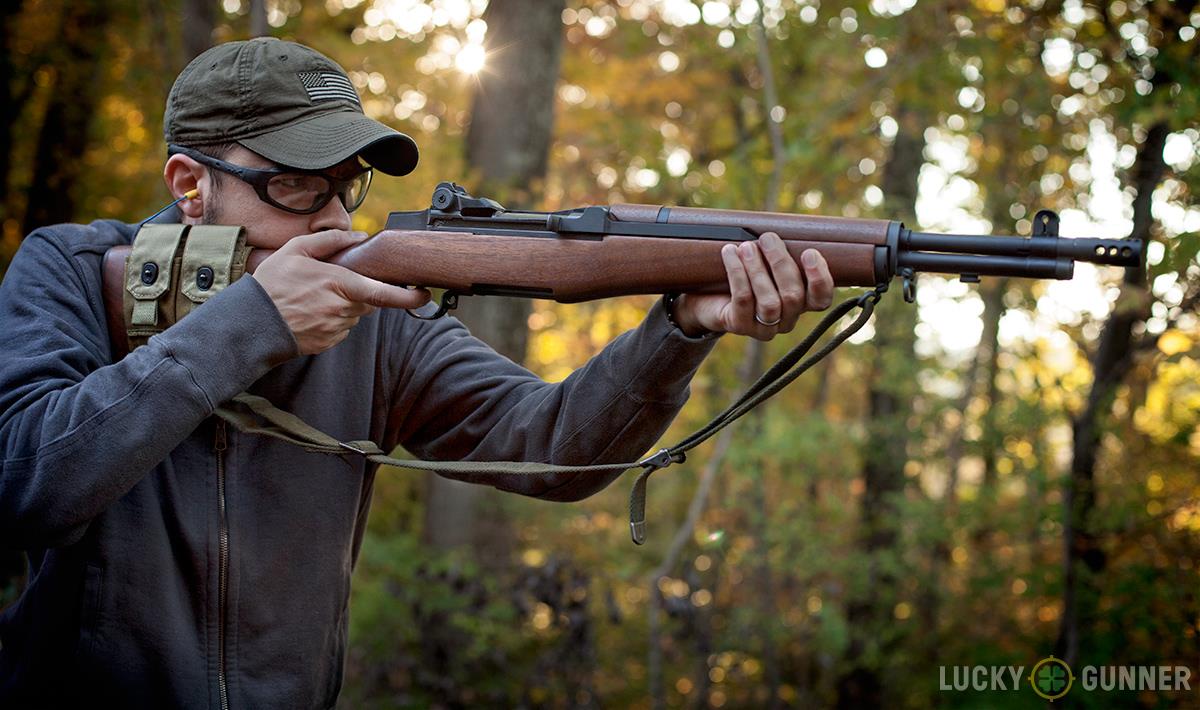 What is a Tanker Garand?

To get you up to speed if you’re not in a mood to slog through the Facebook comments, the rifle in the photo is an original Springfield Armory M1 Garand that’s been worked over by Tim Shufflin of Shuff’s Parkerizing. The original 24-inch .30-06 barrel has been replaced with a 16-inch .308 Win barrel, eliminating the need for a front handguard and dropping the overall weight from 9.5 pounds to a much handier 7.7 pounds. The end result is what Tim has dubbed the “Mini-G”, but depending on who you ask, it may or may not be accurate to also label it as a “Tanker” Garand.

Traditionally, M1s dubbed as Tankers have an 18-inch barrel, and leave two inches of the front handguard intact like the top rifle in the photo above. But labeling the slightly shorter Mini-G a as a Tanker wouldn’t necessarily be wrong since there never was a “real” or official M1 Tanker, and the term was invented purely for marketing purposes. However, the idea of a shortened version of the M1 was certainly being batted around in the latter days of WWII, and that’s where we have to look for the origins of the carbine-Garand variant we know today.

The original M1 Garand was technologically more advanced than its battlefield competitors in WWII, but it was still long, heavy, and cumbersome. This was particularly detrimental to both paratroopers as well as soldiers fighting in the jungles of the South Pacific.

The shorter, lighter, and significantly less powerful M1 Carbine was never intended for front-line assault troops, but was often pressed into that role because of its superior handling characteristics. There was a clear need for a rifle that would combine the firepower of the M1 Garand with the maneuverability of the M1 Carbine, but tanks had nothing to do with it.

In 1944, engineers at Springfield Armory set to work on the M1E5 — a Garand with a shortened barrel and a folding metal stock like the one found on the paratrooper version of the M1 Carbine. The results were disappointing. Due in part to the slow burning powders used in the standard .30-06 ball ammo of the time, the noise and muzzle flash generated was considered excessive, and accuracy was greatly reduced.

Oblivious of the M1E5 experiments, a general in the Pacific Warfare Board put in a request for 15,000 carbine-length Garands. He had the Phillipine-based Ordnance division of the 6th Army hack together 150 shortened Garands as proof of concept. A couple of these field-improvised M1s were sent back to Springfield Armory to be used as a starting point for the larger order.

There was a clear need for a rifle that would combine the firepower of the M1 Garand with the maneuverability of the M1 Carbine, but tanks had nothing to do with it.

Right away, the guys at Springfield recognized the sample rifles as nearly identical to the M1E5 they had tested the year before. They worked up a fresh prototype, this time with a standard wood stock, and dubbed it the T26. The subsequent tests with the T26 didn’t go any better than those conducted with the earlier metal-stock M1E5. In addition to the loud and flashy muzzle blast, the shorter action caused premature wear on parts, unreliable function, and excessive fouling in the gas system.

By this time, Germany had surrendered, ending the war in Europe, and victory in the Pacific was near. The effort required to address the problems with the T26 was considered too great and the project was scrapped.

Birth of the Tanker

The only T26 test rifle ever built at Springfield was damaged during testing and was either discarded or salvaged for parts. A similar fate likely befell the 150 experimental Garands that were field-modified in the Pacific. The sole remaining sample of the original modified Garands is one of the prototypes that was sent to Springfield in 1955, which made its way to the Springfield Armory Museum where it remains today.

In the early 1960s, this museum piece was spotted by Robert E. Penney, Jr., who thought the shortened Garand would be a handy weapon for tank crews. Through his company National Ordnance (and later Alpine), Penney was in the business of selling remanufactured M1 Garands made from the re-welded receivers of surplus rifles that had been cut and sold as scrap. Penney took his new idea and had some of his sketchy Garands cut down to be sold as “tanker” models. Soon after, the Tanker Garand was being advertised in gun magazines alongside the more authentic military surplus rifles.

Other companies later followed the trend, and none of them added their own markings to the receivers. Since only the original wartime serial numbers and manufacturers appear on these commercially modified rifles, many gun enthusiasts over the years have mistakenly assumed that the Tanker Garand was an authentic military variant of the M1.

Considering the somewhat questionable origins of the commercial Tanker Garand, it’s understandable that some M1 fans would consider the modification to be “sacrilegious”. I look at it a little differently, though. Remember, the concept of a Garand carbine was born out of battlefield necessity. If WWII had lasted an extra couple of years, it’s at least a possibility that a shorter M1 rifle would have made its way into the hands of American GIs. I like to think of a well-done Tanker modification as the realization of what many soldiers of the era actually wanted their M1s to be.

Fortunately, Tanker modifications are not limited to those made from crudely re-welded (and dangerous) surplus receivers. Many gunsmiths over the years have offered to perform the Tanker conversion on intact, good condition M1 rifles. In the past, a few companies have even made Tankers from their own newly-manufactured receivers, including Springfield Armory, Inc (not to be confused with the now-defunct military plant of the same name).

Today, some of the best Tanker style Garands come from Fulton Armory, who builds their “T26” rifles from original USGI receivers. And of course, there’s also the aforementioned Mini-G from Shuff’s Parkerizing, which I would personally recommend if you already own a Garand and want to have it modified. With quality parts and a knowledgeable gunsmith, the Tanker Garand is a handy rifle with excellent balance that’s fun to shoot and is, in many ways, far more practical than its full size counterpart.