Mechanical offset is something every rifle owner should know about, especially if you’re using an AR-15 or other modern semi-auto carbine. Mechanical offset (or sight height over bore) is the reason your rifle seems to shoot low at closer distance. Today we’re looking at why that matters and how to compensate for it. Details in the video below, or scroll down for the full transcript.

I was at the range earlier today to confirm the zero on my AR-15 and I thought it would be a good opportunity to talk about something that I think every rifle owner should know about. It’s called mechanical offset and it affects all firearms to some degree, but it’s especially an issue with ARs and other modern semi-automatic rifles where the sights or optic are positioned a couple of inches above the bore.

So here’s what that means: I’ve got this AR zeroed for 50 yards. I just confirmed that with a 5 shot group. I aimed for the center of the bull and that’s where my rounds are going – my point of aim is the same as my point of impact. Now let’s see what happens if I try to do the same thing at three yards. Same rifle, same ammo, same optic. I’m using the black paster for my aiming point and all my rounds are hitting consistently about 2 and a half inches low. That is simply because my optic is physically higher than the barrel and that’s what is referred to as mechanical offset or height over bore.

I repeated that exercise with the paster at 5, 7, 10, 15, and 25 yards and you can see that the further out I go, the less that mechanical offset affects my point of impact. It doesn’t really change much between 3 and 10 yards. At 15 yards, it’s still an inch and a half, and at 25, it’s down to half an inch, which for all practical purposes is nothing to worry about. These exact numbers will change depending on the rifle, the ammo, and the zero, but you’ll probably see similar results, especially within about 10 or 15 yards. 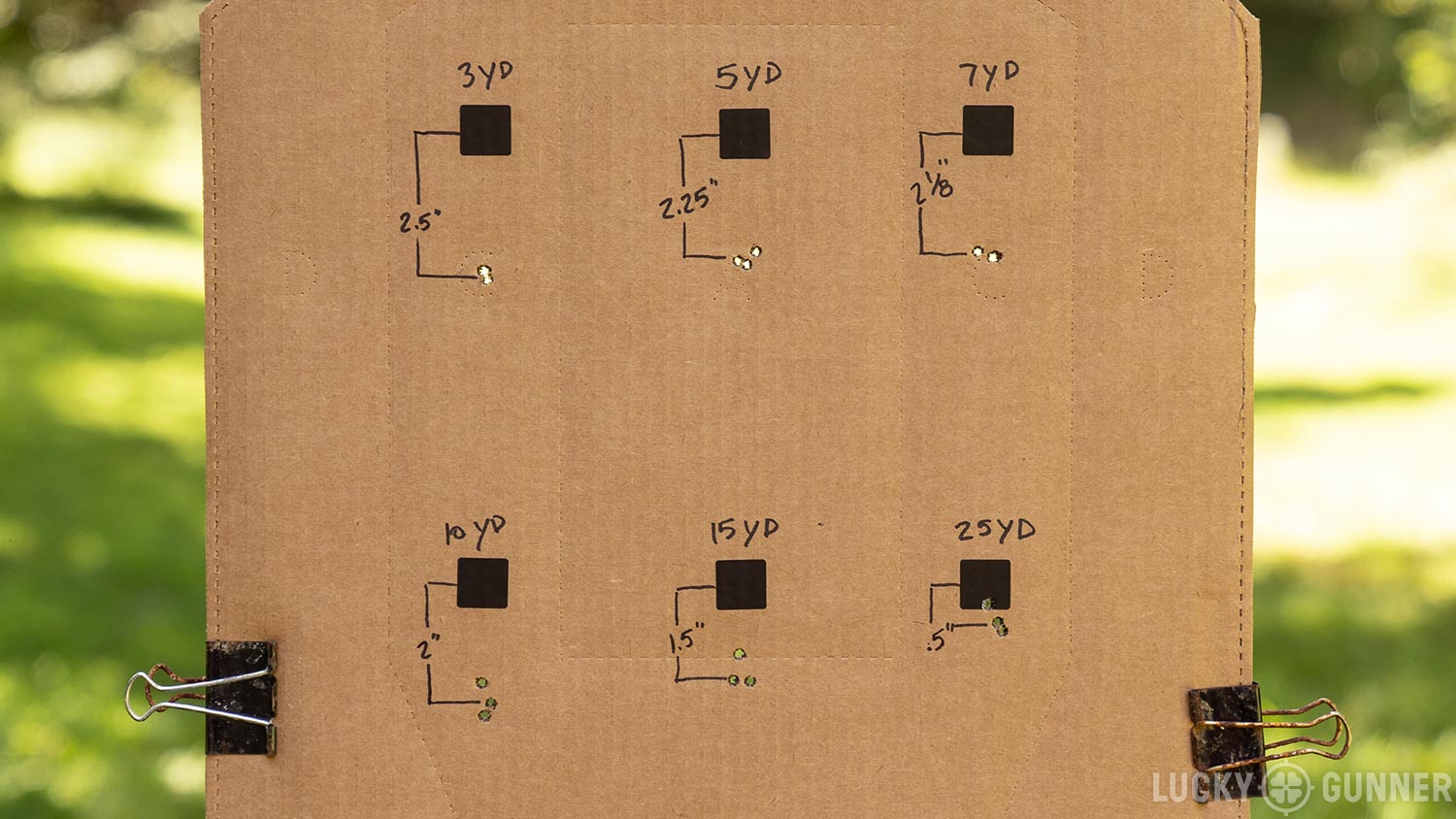 This is not specific to magnified optics. Mechanical offset still has to be taken into account if you’re running a red dot or iron sights. The only time it’s not going to be noticeable is if you’ve got sights really close to the bore like you’d see with iron sights on a shotgun, a lever action, or a bolt action. But if you take that same bolt action and put a big 3-9x scope on it, your height over bore is going to be two inches or more and then mechanical offset becomes an issue at close range.

When Does Mechanical Offset Matter?

Whether that offset is actually something that will make any real difference you kind of depends on what you’re using your rifle for. It’s a common topic in the context of training for combat or home protection. If you’re trying to make a headshot or you’ve got a threat that’s partially obscured and you need to hit a small target at close range, you really have to know what your offset is and compensate for it.

But mechanical offset has a lot of relevance outside of that context. It will come up in action shooting competition like three gun matches where you might have rifle targets at 200 yards or 5 yards. Hunters certainly need to have a good understanding of it. I don’t do a ton of hunting myself, but I’ve done enough to know that the animal doesn’t always appear “out there” where you expect. Sometimes they pop up just a few feet away. Having your round impact two inches low might have a serious effect on how that animal responds to being shot.

“This is not specific to magnified optics. Mechanical offset still has to be taken into account if you’re running a red dot or iron sights.”

Another big way that mechanical offset is really important is shooting around potential obstacles. So whether that’s sandbags on a bench rest or shooting around cover or from inside a deer blind, you have to remember that just because you have a clear line of sight to your target through your optic or your sights, that doesn’t mean your muzzle is clear of obstructions.

I saw a video just yesterday where a guy is shooting in a training class or a match or something, and he’s seated inside a car, and he fires his AR out of the open driver’s side window, and then he swings over to shoot another one and you can see he’s got a clear line of sight, but right in front of his muzzle is the side view mirror which promptly explodes in his face when he fires. And I’m sure a lot of you are familiar with the gentleman on YouTube a few years ago who was using the front of his truck as a rifle rest and he ends up putting a round through his hood because he forgot about the offset.

And that brings me to my next point. It’s not enough to just know the offset of your rifle, it has to be something you practice until compensating for it is second nature. I am sure that both of those guys I just mentioned were well aware of the concept of mechanical offset, but in the heat of the moment, they just forgot about it. If we’re going to be shooting around obstacles or engaging targets at close range, usually we’re talking about situations where time is a critical factor, so we can’t plan on having the luxury of actively thinking about offset. It has to be baked into our subconscious, and the only way to get that is through a lot of repetitions at the range and with dry fire.

Now, I know someone is going to ask, “if I’ve got a rifle and it’s mainly for home defense and I don’t have a shot anywhere in my house that’s longer than, let’s say 10 yards, why don’t I just zero my rifle for 10 yards and forget about mechanical offset?”

There are a few reasons that’s probably not a great idea. First, your sights or your optic might not be mechanically capable of zeroing that close. I’ve never actually tried it myself, but I would imagine it’s not going to always work. Even if it’s possible, you’re still going to have to deal with offset at closer range, like inside of five yards. There’s no getting around the fact that there is physical distance between the optic and the bore, so you can’t eliminate offset just with a close zero. 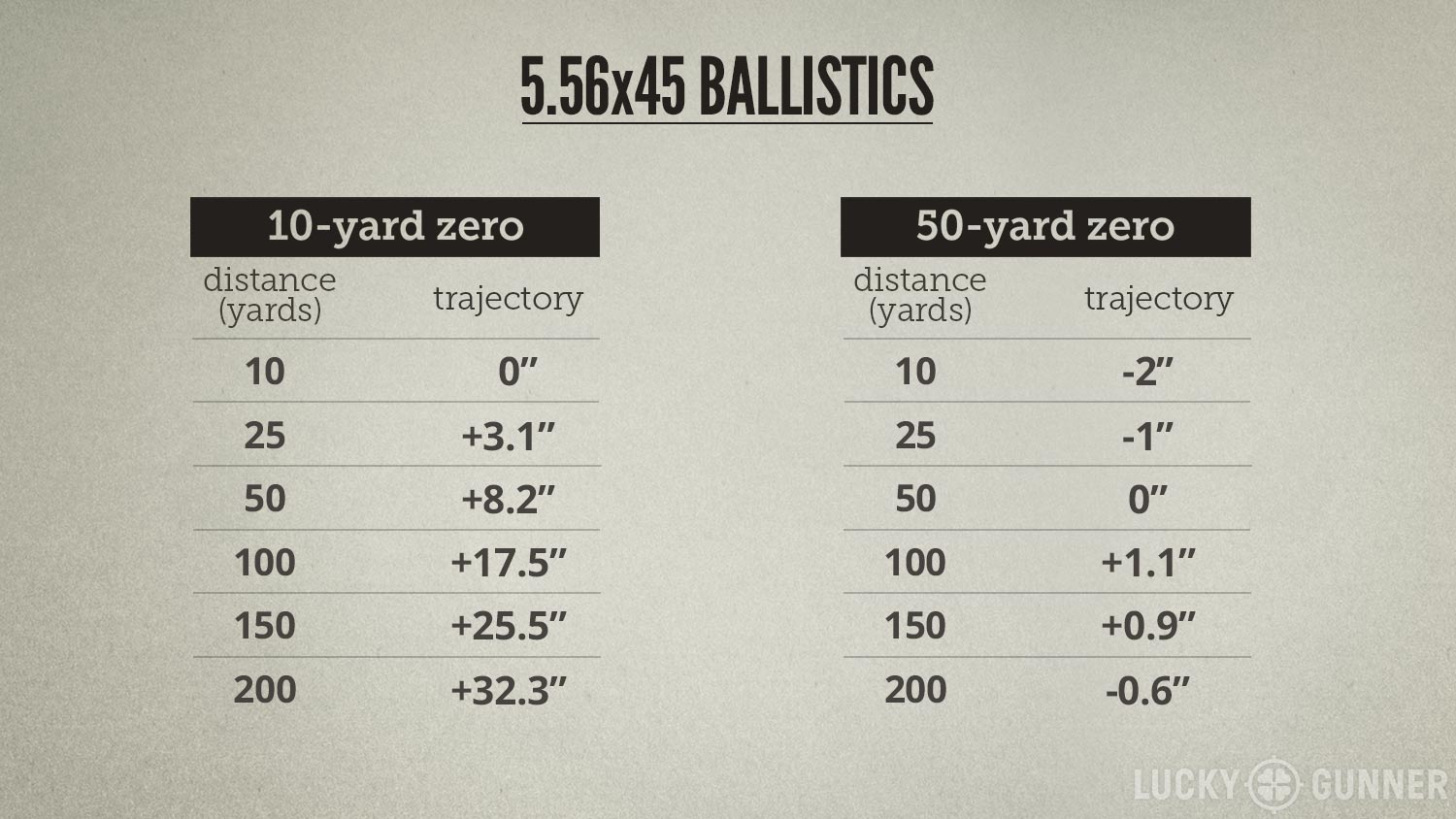 The other problem is that a 10 yard zero basically makes the rifle unusable for any distance beyond 10 yards. If I take the specs and ammo for the rifle that I’ve got zeroed at 50 yards and plug that into a ballistic calculator, with a 10 yard zero, I would be hitting 3 inches high at 25 yards, 8 inches high at 50 yards, a foot and a half high at 100, and more than two and a half feet high at 200. Compare that to a 50 yard zero where my rounds are going to hit within two inches of my point of aim at any range between about 10 yards and 200 yards. Or if you prefer a 100 yard zero or the traditional 25/300 meter battlesight zero, it’s the same kind of thing. Your rifle becomes much easier to use at longer ranges at the small expense of compensating for offset at close range. If you plan to ever use the rifle for anything other than that 10-yard home defense scenario, you probably don’t want to zero it for that distance.

So if you haven’t already, get out to the range and figure out the mechanical offset for your rifle and when you run out of ammo, be sure to get some more from us with lightning fast shipping at LuckyGunner.com.