And now for something completely different. For the next couple of weeks, I’m taking a break from the normal self-defense oriented topics (although there is an element of that here) to revisit a subject that’s an old favorite of mine: scout rifles. To be honest, I’ve never felt any particular need to own or build a “proper” scout rifle, but I am very much a fan of the spirit of the scout rifle concept. I really enjoy working with lightweight, handy bolt action and lever action rifles, especially when that means getting them off the bench and into the kind of field conditions that they were originally intended for. There’s certainly nothing wrong with bench rest shooting or long range precision rifle shooting, but I’ve never found much use for those pursuits beyond pure sport. However, the compact bolt action as a potential answer to the search for a general purpose practical rifle is an idea I can get behind. Details in the video with transcript following.

This is a Tikka T3x Lite Compact. It’s chambered in .308 Winchester and feeds from detachable magazines. With a Leupold VX-R Patrol scope and a Wilderness Tactical Rhodesian Sling, it weighs just 7.5 pounds loaded. This is not a scout rifle. Even though it’s a handy, lightweight, general purpose rifle, it’s missing a few of the key criteria that define a true Scout rifle. But is that such a bad thing?

Jeff Cooper’s Scout rifle concept is more popular now than it’s ever been. In the last few years, there has been a lot of discussion about scout rifles, and most of that has revolved around how we define the scout and whether the scout really is the ideal general purpose rifle. I even wrote an article along those lines myself a couple of years ago.

But instead of getting all wrapped up in critiquing and defining the Scout rifle, what if we just borrowed the best of Cooper’s ideas and used them as a starting point to put together rifles that worked for whatever our needs happen to be?

For example, a lot of people will tell you that a Scout rifle has to have ghost ring style backup iron sights, and there are some pretty compelling reasons to pursue that option. Maybe you’re out somewhere and you drop the rifle and damage the scope, or a screw comes loose and you lose your zero. If you have quick detach rings, you can just remove the scope right there and use your iron sights for the rest of the trip.

But if you decide that’s a feature you have to have, you are going to be limited to just a handful of bolt actions that come from the factory with ghost ring sights. You can have a gunsmith add iron sights to a rifle that doesn’t come with them, but that typically costs several hundred dollars. On top of that, depending on how the rear sight is installed, you might not be left with many options for where you can install a scope.

What if, instead of iron sights, you spent that money on a compact red dot optic that you carry in your backpack? If anything goes wrong with your primary scope, you just pop it off, stick the red dot on there, and you’re ready to go again with an optic that’s superior to iron sights in almost every way and it doesn’t require any costly modifications to your rifle. That solution might not work for everybody, but it’s just one example of how setting aside that preoccupation with the scout definition might allow us to consider some practical options that we would have otherwise been forced to dismiss.

There is nothing new about taking a more pragmatic approach to setting up a general purpose rifle, even among people who were once students and colleagues of Jeff Cooper himself. The scout rifle is closely related to a broader classification that some people refer to as “practical rifles”. Unlike the scout rifle, there is no official definition of the practical rifle, and I couldn’t tell you who coined the term for this specific application. But today, it is closely associated with the shooting instructor and former Gunsite staff member Randy Cain. 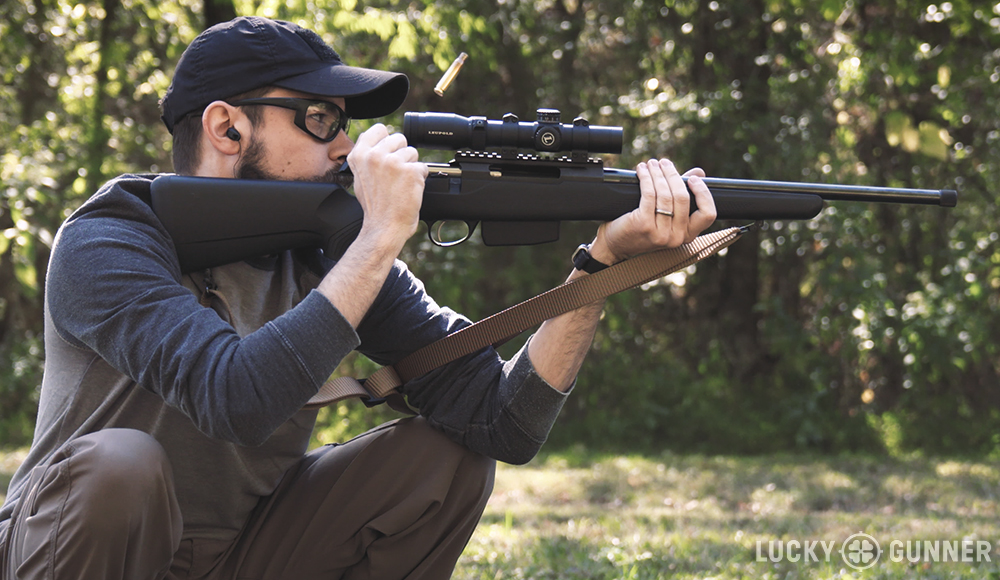 Randy describes the practical rifle as light and quick-handling and useful at arms reach out to 3 or 400 yards. They are usually bolt actions but can also be lever actions. They can be chambered in just about any rifle cartridge depending on the intended use, but the default choice is .308 Winchester. The preferred optics are low power variable scopes like a 1-4 or 1-6 power, or they might have non-magnified red dot sights, or iron sights.

The practical rifle is essentially the humble traditional deer rifle with special attention paid to a couple of key features to make it a slightly more flexible general purpose tool.

I should probably clarify what I mean by “general purpose” because this is another topic that comes up all the time with the Scout rifles — what “general purposes” are they actually good for besides hunting?

Well, there’s also pest control, or depending on where you live, protection from dangerous animals. The prepper community has also really embraced the idea of a low maintenance, manually operated general purpose rifle. I don’t want to speculate too much about politics or potential changes in firearm laws and I’m not going to ask you to envision some kind of post-apocalyptic Red Dawn scenario. I’ll just say this: a practical rifle can travel with you in places where an AR-15 or other semi-automatic rifle is not legal or where it might draw unwanted attention. I would not want to rely on a bolt-action rifle for home defense, but if that’s what you have available, they can be very effective for personal protection, even at close range if you have practiced that skill.

Short range engagement is one of the skills Randy Cain teaches in his Practical Rifle class. I had a chance to take this course a couple of years ago, and it was really eye-opening to learn what a quick-handling bolt gun is really capable of when you try to run it through the kind of exercises that are normally reserved for a semi-auto carbine.

And that brings me to another aspect of these discussions about scout rifles that I think demonstrates how a lot of people are completely missing the point. It’s uncommon to hear anyone talk about actually building skills with a scout rifle. It’s as if the physical characteristics of a rifle and preparing to use that rifle for any real world application are two completely separate conversations.

But obviously, those two issues are very closely related. We can guess what a particular rifle or accessory might be good for but that has limited value if we aren’t getting out there and using them. And to use them properly, we need some marksmanship and rifle handling skills — the things that make up what you might call “riflecraft.” So that is what we’re going to talk about next time.