My favorite kind of reviews to do for Lucky Gunner are the ones where I have a vested personal interest in the product that’s being evaluated. There are plenty of guns for which I could offer an honest assessment after trying them out for a few weeks, but it’s not often that the outcome of that process ends up having an immediate impact on what I actually decide to put in my holster when the review is done. However, this review is not a typical review for me.

When I made the decision to switch over to double action/single action pistols for self-defense and concealed carry, it didn’t happen overnight. I had been toying with the idea for several months before I took the step of actually shopping for DA/SA pistols. That’s when I picked up the Beretta PX4 Compact based on a recommendation (the details of which are in the video below). It wasn’t so much a matter of “I think I want to carry this gun” as much as “let me see if I can even shoot a compact DA/SA pistol well enough to seriously consider making this switch.”

I’m not necessarily thrilled with every aspect of this pistol, but I quickly grew to like it enough to confirm that switching to DA/SA was the right move for me. After that, the question became, “do I like the PX4 enough to stick with it, or is there a DA/SA that would work better for me?” So the video below is the first of a two-part review outlining my impressions of the PX4 after working with it for several months, and don’t be surprised if you see some other “challengers” reviewed in the near future.

After you watch this one, be sure to check out part 2 here.

There is a very good chance that you don’t care about the Beretta PX4 Compact. Because if you’re in the market for a modern compact 9mm pistol, odds are, you’ve probably been lead to believe traditional double actions are obsolete. But if you are among the growing ranks of shooters who are becoming disillusioned with the propaganda of striker-fired “perfection”, the PX4 Compact is easily one of the best alternatives on the market.

This is not a new pistol. It actually came out back in 2011 and  the full-size version was first introduced in 2004, which means the design actually pre-dates a lot of today’s more popular polymer handguns like the Smith & Wesson M&P. But unlike the M&P, the PX4 hasn’t really gained a whole lot of notoriety. It hasn’t seen much use by law enforcement or military, you don’t see it a whole lot in high levels of competition, and the self-defense training community is still having a love affair with the Glock 19.

And there’s a reason the Glock 19 is so popular among people who are serious about concealed carry. It’s reliable, it’s got excellent aftermarket support, and it hits that sweet spot for size where it’s light and compact enough to carry, but still large enough for you to get a solid firing grip and shoot close to your full potential. So when I first considered switching over to double actions for all my self-defense guns, one of my initial concerns was that there aren’t a whole lot of options that are in that Glock 19 size category.

Fortunately, right around that same time I came across a forum thread that was started by Ernest Langdon called “The PX4 Compact might be my DA/SA Glock 19.” Ernest is a highly-regarded firearms instructor with an impressive resume that includes multiple IDPA and USPSA championship wins using Beretta and Sig double action pistols. So even though Ernest is a big advocate of double actions and the PX4 Compact has been out for a while, he hadn’t paid much attention to it, and really, neither had anybody else. But last year, after talking to some of the guys at Beretta, Ernest decided to give it a shot, and now he’s an avid fan of the PX4 Compact, and because of his experience, a lot of other people have decided to try it out, myself included. 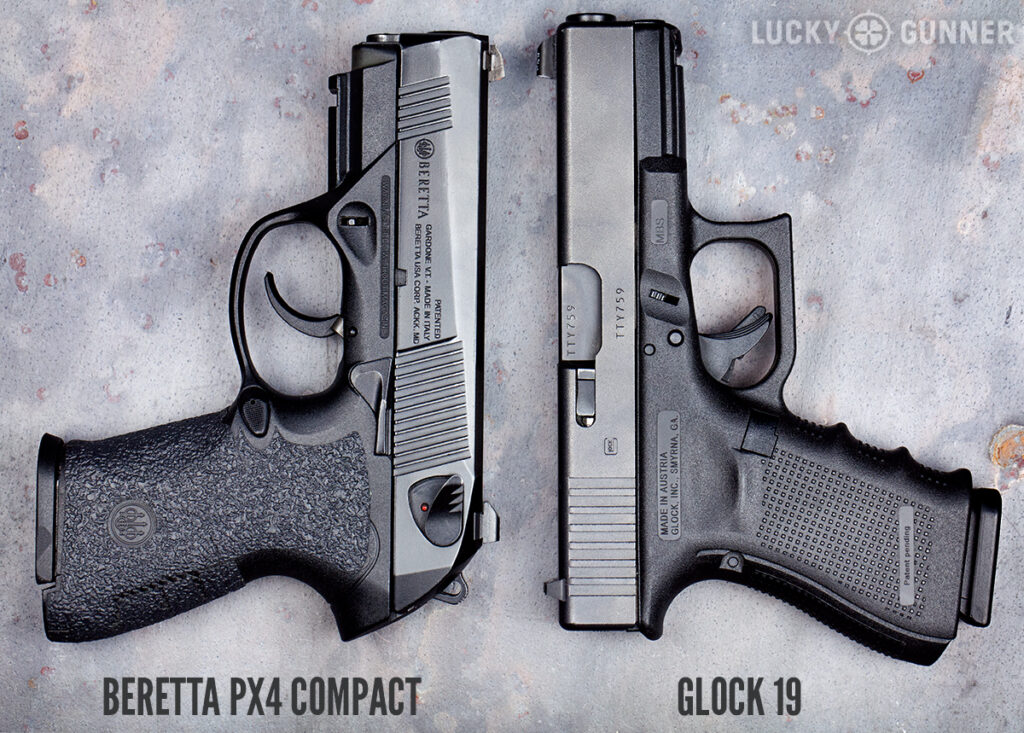 The Beretta PX4 Storm Compact weighs almost 24 ounces empty and 33.4 ounces when fully loaded with 16 rounds of 9mm. The barrel is 3.27 inches long, which is on the short side relative to its overall height of 5 inches.

As it comes out of the box, the PX4 Compact has white three-dot sights, an ambidextrous safety decock lever, an ambidextrous slide release, interchangeable large, medium, and small backstrap inserts, and a mag release that can be reversed for left-handed shooters.

But I’ve made a few changes to this PX4. I’ve converted the safety/decocker to a decock-only lever, and I’ve swapped out a bunch of the original parts for aftermarket ones. One of the most important advantages of this model is the amount of aftermarket support Beretta has put behind it to make it a really flexible platform for shooters with different needs and preferences. So even though I’ve made a bunch of changes, with the exception of the Talon grip tape, this gun still has 100% Beretta parts in it.

I’ve done a lot more with the PX4 Compact than just tinker with it. In the last 6 months, I’ve shot it in one of Ernest Langdon’s handgun classes, and I used it at the Rangemaster Tactical Conference in Memphis back in March. In total, I’ve carried this pistol for about six months and I’ve put just over 3400 rounds through it. In that time, it has malfunctioned only twice. Both were classic stovepipe failures to eject and both happened within 100 rounds of each other after the gun had not been lubricated for about 1500 rounds. 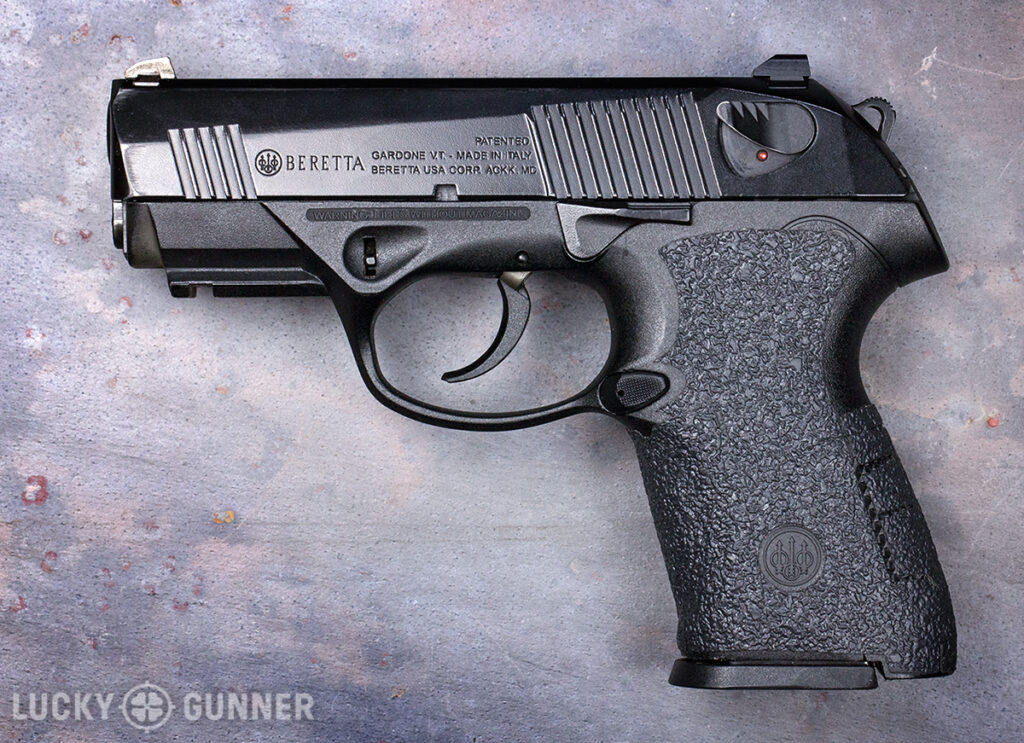 So it’s been very reliable so far, which I consider to be the number one priority in a self-defense handgun, but it’s also just been overall easy to use. The slide is really easy to rack, which I know is a big concern for some people. I also think the ergonomics are fantastic —  and I know that’s kind of subjective, but I think most shooters will find the trigger reach is a big improvement over the Beretta 92 series, and that’s really critical for running that double action trigger. The slide-mounted decocker is also much easier to reach than any other slide mounted lever I’ve used.

The double action trigger is not especially light, but it’s really smooth. The single action is nice and crisp and it breaks at exactly the same point in the trigger’s travel as the double action stroke.

Another big highlight of the PX4 Compact is the soft recoil. I mean, it’s a compact 9mm, so there’s not a ton of recoil to begin with, but when you start running strings of rapid fire, that front sight really just seems to pop right back on target. Beretta would probably tell you this is because of their proprietary rotating barrel design. I don’t know if that’s got anything to do with it or not but I think if you’re used to shooting any other compact polymer handgun, you will notice a difference.

Making an objective evaluation of this pistol’s range performance is actually kind of tricky for me. My normal approach for a concealed carry gun is to just compare it to the gun that I would usually carry every day which, for the last few years has been a Smith & Wesson M&P Compact. But since I decided to switch to double actions, I haven’t been shooting the M&P. It’s taken some time for me to learn how to shoot a traditional double action gun at the same level I was shooting a custom striker fired pistol. But doing that work has made me a better shooter overall, and now I can shoot quicker and more consistently with the PX4 than I ever could with the M&P. But I can’t say that’s because the PX4 is objectively better or easier to shoot than the M&P or any other compact 9mm. 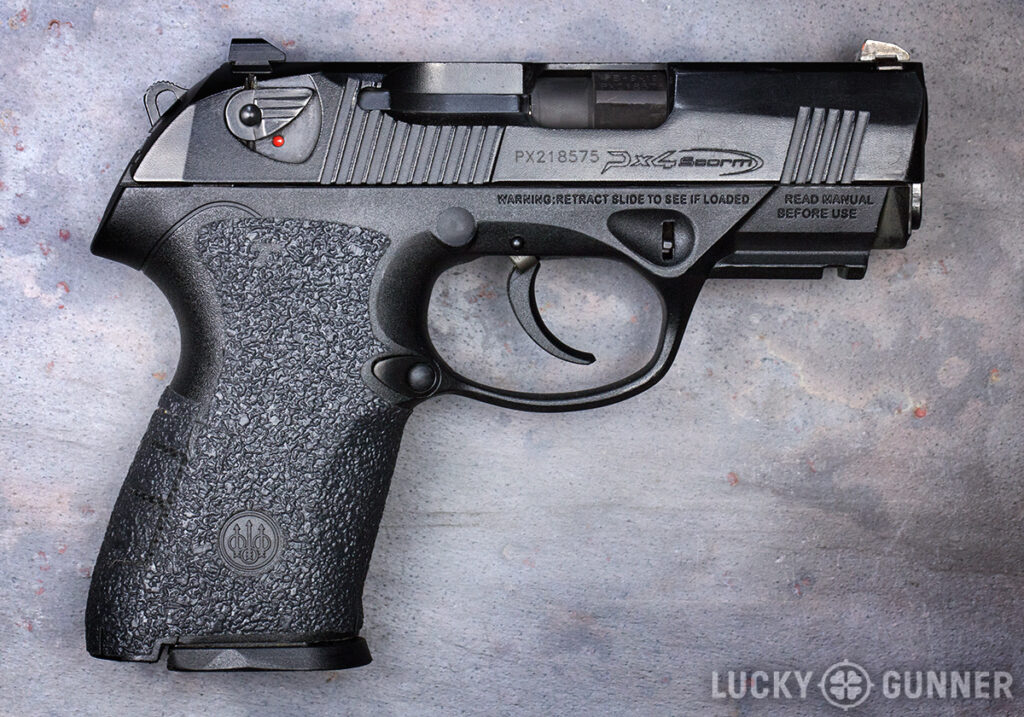 It might make more sense to compare the PX4 to another gun I’ve been shooting a lot recently, and that’s my full-size Beretta 92G. This gun is also a traditional double action, but it has a much longer sight radius, a professionally tuned action, it’s more mechanically accurate, and it’s heavier so theoretically, it should be much easier to shoot. But targets and shot timers don’t lie, and inside of 10 yards, there’s not much difference in what I can do with these two pistols. I’m still getting used to the single action trigger on the PX4 — it’s a little stiffer than I’d like it to be. And beyond 10 yards, there’s a definite edge with using the 92, but I can carry the PX4 Compact every day, and basically get 90% of the capability I would have with a custom full-size service pistol.

I’m still in the process of evaluating a couple of other double action carry pistols, so I’m not ready to say the PX4 Compact is definitely the gun I’m going to be carrying long term, but I can say that I’ve been really impressed with it and I wouldn’t be at all disappointed if it was the only option I had.

Next week, I’ll talk more about the specific parts I’ve changed out on my PX4, I’ll go over the results of our accuracy testing, and I’ll also share a couple of complaints that I have with the pistol.

Continue to Part 2 of our Beretta PX4 Compact Review.