It’s Wheel Gun Wednesday! Today’s review is part of our series of articles focusing on the role of the revolver for modern self-defense.

Throughout the series, I’ve talked about techniques, gear, and the viability of carrying a revolver in today’s world of affordable and reliable semi-automatics. But one popular subject I haven’t given much attention to is that of lightweight compact snubnose revolvers.

That’s not an accident. Even though featherweight snubbies are the most popular breed of the wheel gun today, they are also largely responsible for the negative impression that many shooters have of revolvers. They’re difficult to control and shoot accurately. In defensive calibers, they deliver harsh recoil, and almost without exception, they have terrible sights. I’d much rather focus on the revolvers that have a bit more size and heft to them that are both fun to shoot and easy to shoot well. 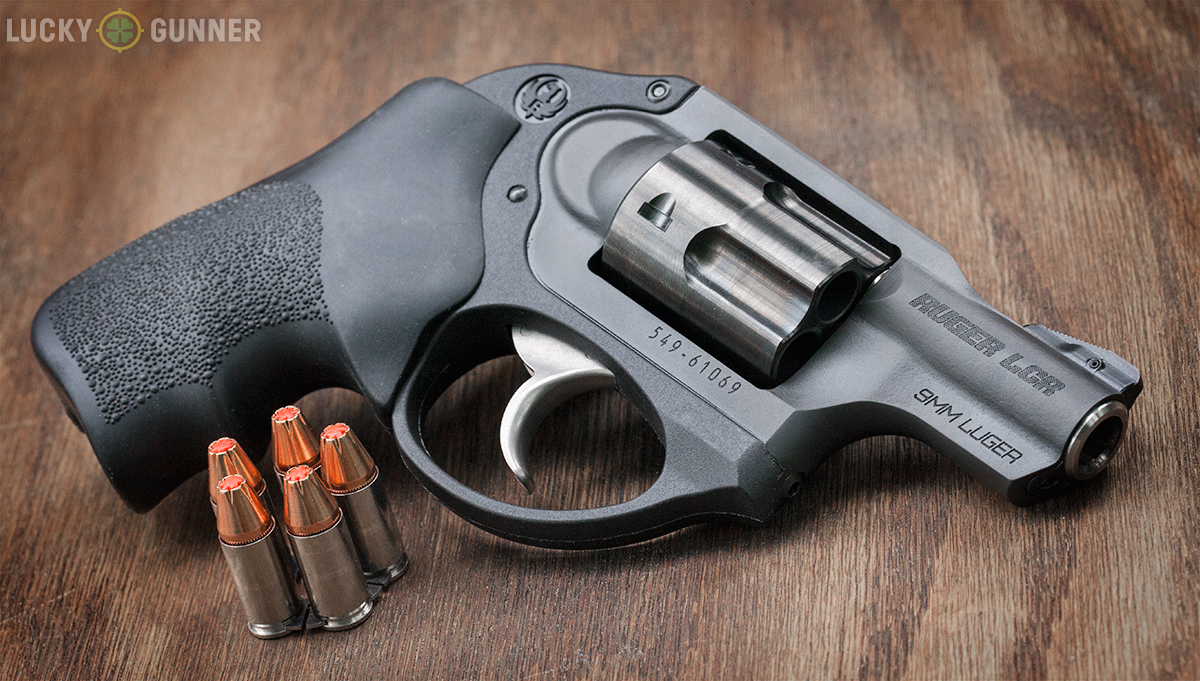 But if there’s an exception to the rule of user unfriendliness in the lightweight snubnose category, it’s the Ruger LCR series. When the original .38 special version was released a few years back, I actually wasn’t overly impressed, initially. The trigger was certainly a big improvement over the ubiquitous Smith & Wesson J-frame, but the harsh recoil was not significantly better than other lightweight revolvers. Some people are okay with carrying a gun they don’t shoot much at the range, but for me, that kind of defeats the purpose of practice. If the recoil from a handgun is uncomfortable enough that I don’t want to shoot more than 50 rounds at a time, then I will find a different gun to carry — one that I’ll enjoy practicing with.

Fortunately, Ruger followed up the original LCR with a slightly heavier version chambered for .357 magnum. You’d have to be a glutton for punishment to actually fire magnum loads out of that thing, but the extra four ounces of weight on the .357 LCR make a major difference when firing .38 special ammo, bringing the recoil from “barely tolerable” down to just “mildly irritating”. The addition of a .22 LR version of the LCR, which I reviewed last year, brought even more appeal to the line, since you could then have a trainer snubby with the exact same size, shape, and feel as its centerfire brothers.

And that brings us to the subject of today’s review – the new 9mm LCR. It’s built on the same frame as the .357 version, so the upper half is steel with a polymer lower half. And like the .38 special and .357 versions, the 9mm cylinder holds 5 shots. In fact, besides the caliber, the only major difference of the 9mm version is that it uses moon clips.

You might be wondering if a 9mm revolver is a solution in search of a problem. With the scores of available loads in .38 special and .357 magnum, what’s the point of chambering a revolver in 9mm, especially since it requires fussing around with moon clips in order to work properly?

If the simplicity of the revolver is what appeals to you, then the .38 or .357 versions of the LCR probably make more sense, but there are some compelling reasons to consider the 9mm version.

First, there’s the advantage that moon clips offer for reloads. Both ejecting spent cartridges and loading up new cartridges are quicker with 9mm in moon clips than with rimmed revolver cartridges and speed loaders. The shorter length of the 9mm cartridge makes stuck cases less likely, and generally speeds up the process of reloading.

But, as I’ve mentioned in the past, the likelihood of pulling off a revolver reload in a real world emergency situation is slim, at best. There are, however, some less exciting, but nevertheless practical advantages of a 9mm revolver. Cost of ammo is a big one. Ammo prices are constantly changing, but I can’t remember a time when 9mm range ammo was more expensive than .38 special. Sharing common ammo with your semi-auto pistols is another perk. Even if you don’t envision some end-of-the-world-nuclear-wasteland ammo scrounging scenario, it can be a major convenience to minimize the number of calibers you keep in your personal stockpile.

Most importantly however, the performance of the ammo is probably the biggest advantage of the 9mm revolver. Neither .38 special nor .357 magnum are known for living up to their potential when fired from short barrels. There are a couple of decent self-defense loads out there designed specifically to address this issue, but 9mm loads typically demonstrate better ballistic properties in short barreled guns. You might find ballistics test that will show superior penetration or expansion from a .357 when compared to the 9mm, but that will be at the expense of severely punishing recoil.

None of these advantages really mean much if the 9mm LCR doesn’t fare as well on the range as the other chamberings. I’ve owned the .357 magnum LCR for a few years now, and I’ve put in a fair amount of range time with it this year since starting the Wheel Gun Wednesday series. I’ve been pretty happy with the performance I’ve been able to get out of the .357 version, so how does the 9mm LCR measure up?

Despite the less than ideal sights, slow fire accuracy was respectable. Using Hornady Critical Duty 135 grain 9mm ammo, I shot a 2.25″ 5-round group at 15 yards. With Blazer Brass 115 grain, the group opened up to 4″. Nothing to write home about, but accuracy on par with other small revolvers.

The trigger on the LCR 9mm is as good as any out of the box revolver trigger you’re likely to find. The pull weight measured 9 pounds on my trigger scale, which is about one pound lighter than my .357 LCR. But more important than the weight, it’s also smooth and consistent. Traditionally, stiff triggers are one of the worst aspects of shooting small revolvers, but Ruger has totally reversed that trend with the LCR series.

On the range, the moon clips worked as advertised. I didn’t have any issues with them binding in the cylinder, and reloads were definitely much easier than using speed loaders. Unfortunately, the overall experience of shooting the LCR 9mm did not live up to what I’ve come to appreciate from its .357 counterpart.

It all comes down to physics. Sure, 9mm ammo has better ballistic performance than .38 special, and it has less recoil than .357 magnum. But don’t expect the recoil to feel like a small 9mm semi-auto like the Ruger LC9 or S&W Shield. Without the reciprocating slide of a semi-auto to distribute and soften the perception of recoil, the snap from a small 9mm revolver is no picnic.

Running some drills with the shot timer, my actual performance was not much different between the two revolvers. But after shooting some American Eagle 130 grain .38 special through the .357 LCR, I was ready for more. After three cylinders of the somewhat mild Blazer Brass in the LCR 9mm, I had to give my had a break for a few minutes.

For me, the slight ballistic advantage offered by the 9mm ammo isn’t worth the trade-off in recoil. Others might find the 9mm LCR to be more enjoyable to shoot than I did, but I would suggest that less experienced shooters avoid this one. Even with the smooth trigger, shooting a gun this snappy is an almost sure way to develop a nasty flinch reflex unless you already practice with heavy recoiling guns regularly. On the other hand, the .357 LCR loaded with some light recoiling full wadcutter ammo might be just about the best way to ease into the challenges of a lightweight snubnose. I like the 9mm revolver concept in theory, and I have no complaints with Ruger’s execution of it, but the .357 LCR will remain my favored light compact revolver.