For the next couple of weeks on Wheel Gun Wednesday, we’re taking a break from the Quest for the Ideal Carry Revolver to talk about reloads. Today’s post is all about speed loaders and next time we’ll get into the various revolver reloading techniques.

As we’ve discussed several times before on Wheel Gun Wednesday, one of the biggest disadvantages of revolvers is the slow reload. Compared to swapping magazines in a semi-auto, a revolver reload is complicated and time consuming. There’s not really any way to even the playing field completely, but there are loading devices available that significantly speed up the process of loading a revolver. Moon clip revolvers are probably the quickest, but they only work in revolvers specifically designed to use them which are most often those that fire rimless semi-auto cartridges like 9mm and .45 ACP. Today, I’m looking at the more universal loading devices; speed loaders and speed strips.

There are a handful of different companies currently making revolver speed loaders, but unlike semi-auto magazines, each brand of speed loader functions a little differently. Some are easier or faster to use than others, and the one that’s right for you will depend on what you plan to do with your revolver, and which models are available for your gun. Here are a few of the most popular speed loaders today… 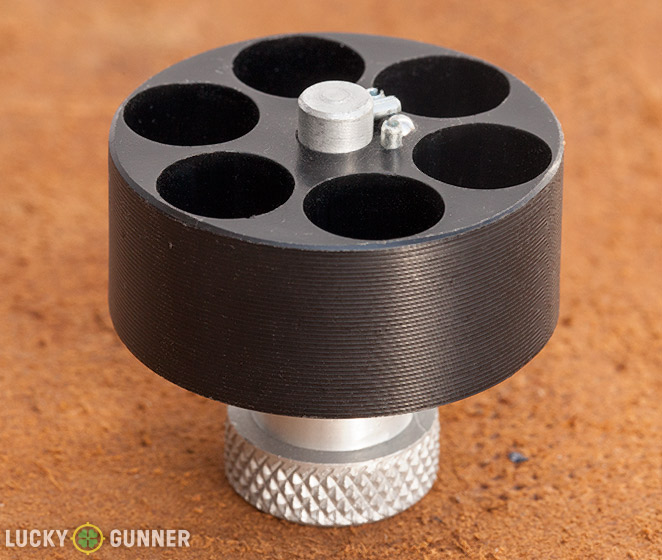 The speed loaders from HKS are probably the most common, largely due to their wide availability and affordable price. They’re simple to use, and hold the cartridges fairly securely, but they’re also slower to operate than some of the other models.

The HKS and 5 Star brand loaders both require the user to twist a knob in order to release the cartridges. But this release knob shouldn’t be used to hold the speed loader or the cartridges could be released prematurely and end up on the ground. So the user has to grab the body of the loader, insert the cartridges into the cylinder, and then let go of the body of the loader in order to twist the release knob. This process makes these loaders slower than the “push” style loaders I’ll cover below. 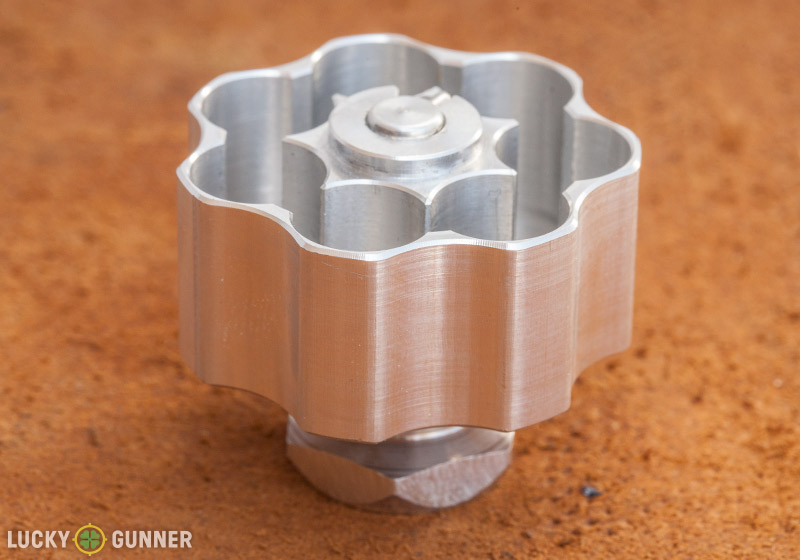 5 Star Firearms is a fairly new company. Their speed loaders function nearly identically to the HKS loaders, but feature an aluminum body instead of plastic. They’re not necessarily any faster than the HKS speed loaders, but 5 Star does make loaders for a wider variety of revolvers.

Safariland Comp I and II 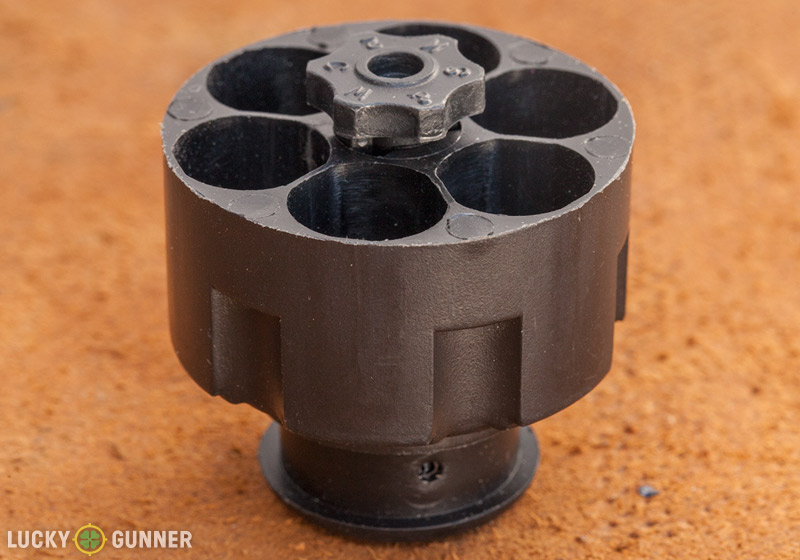 After HKS, Safariland probably makes the most common speed loaders on the market, and their products dominate the competition world. The Comp I and II models are very similar with the primary difference being the larger locking knob on the back of the Comp II. These loaders are among the most compact models as well as the most intuitive, which make them a popular choice to accompany concealed carry revolvers. Unfortunately, the selection of revolvers that are compatible with the Safariland Loaders is fairly small, limited to only 5 and 6-shot .38/.357 models, and a few .44 magnum revolvers. 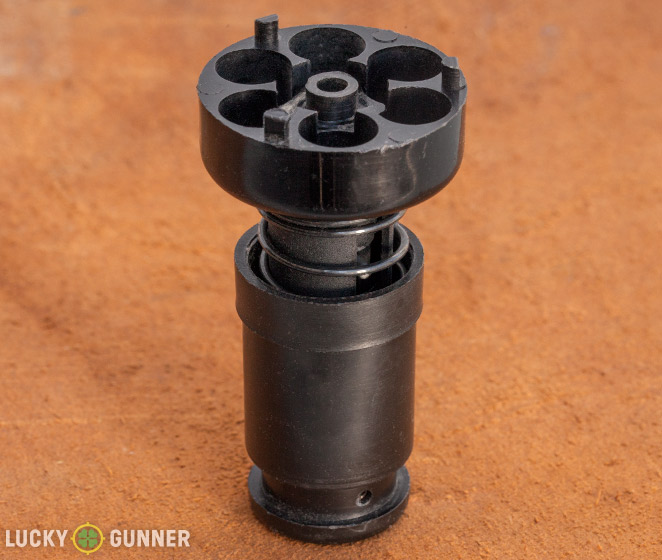 The Safariland Comp III is most often used by competition shooters, but works fine for self-defense purposes if you don’t mind its large size. They are very quick, and the oversized handle does make them easy to manipulate without fumbling. In the Comp II demo, I showed an alternative method for loading the cartridges into the speed loader, but note that this method does not work with the Comp III. 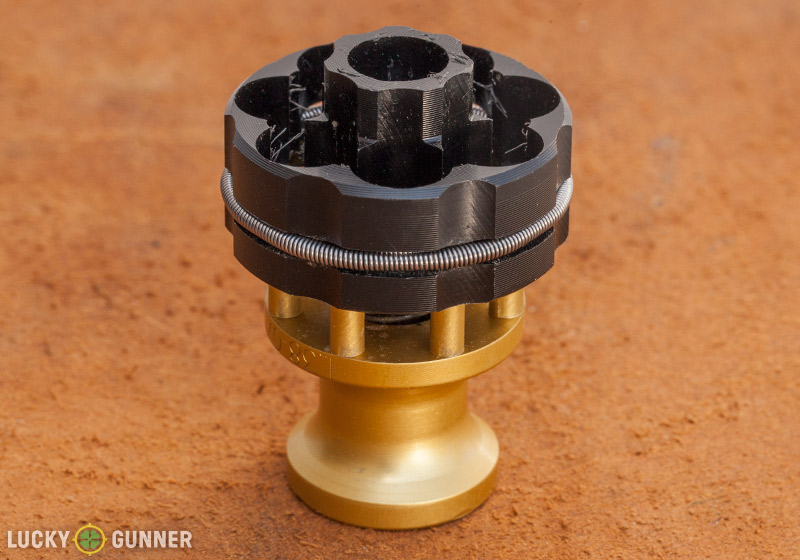 Speed Beez is a newer brand with an impressively broad line of speed loaders. They make the only current production “push” style speed loaders for 7 and 8-shot revolvers, as well as .32/.327 guns and several rimfire models. While not as large as the Comp III, they are pretty bulky for carrying in a pocket, and I get the impression that their primary target market is competition shooters.

The models I demonstrated for this post aren’t the only speed loaders out there. The S.L. Variant loaders are considered by some to be the absolute best, but they’re made overseas, and are rarely imported. Currently, availability is scarce.

Dade was once a popular brand of speed loader with functionality similar to the Speed Beez loaders, but they haven’t been produced in years.

Jetloaders are a brand still being produced today. They bear a strong resemblance to the Safariland Comp III and are often used by competition shooters.

Maxfire speed loaders are also in current production and work somewhat like speed strips but in a round speed loader configuration. I can’t comment from personal experience on any of these brands, but I should mention that master revolver-smith Grant Cunningham has seen multiple revolvers with bent cranes from the excessive side pressure exerted when using the Maxfire loaders.

Despite the name, speed strips are not nearly as fast as any of the above speed loaders. However, their flat profile gives them the advantage of being much easier to carry in a pocket, and reloading from speed strips is still much quicker and less fumble prone than loose cartridges or a dump pouch. Technically, the name “Speed Strip” is a trademark of Safariland/Bianchi, but there are similar products that serve the same function which are often generically referred to as speed strips. The device pictured above is a Tuff Products Quickstrip.

The middle of the week is here and that means it's time for... Wheel Gun Wednesday! This series of posts...