In the competition world, revolver divisions are completely dominated by Smith and Wesson and have been for a long time. The new GP100 Match Champion is Ruger’s first direct attempt at challenging that dominance.

At SHOT Show, we talked to Kurt Hindle, the product manager for the Match Champion. We asked him to tell us in 30 seconds or less why we should consider the new Ruger in a field where S&W is the standard.

You can read the full interview with Kurt after our first impressions section below.

Right now, the most popular action shooting sport for handguns is IDPA (International Defensive Pistol Association), which has two divisions for revolvers. One is designated for wheel guns firing .45 ACP with moon clips. The other division, “Stock Service Revolver,” was set up with the good ol’ fashioned .38 special six shooter in mind, and this is the division for which the Match Champion is tailored. 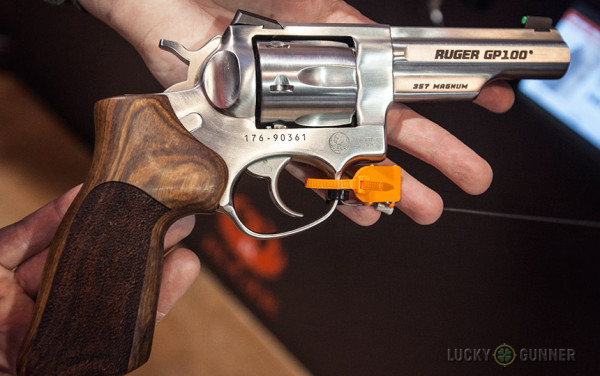 In our Q&A (full text below), Ruger’s product manager for this revolver refers to the Match Champion as a “custom gun” and I believe that’s not just marketing. There’s really no comparing it to a standard GP100. My guess is that if you had an expert gunsmith perform all of the tweaks necessary to turn a stock GP into one similar to a Match Champion, you’d be looking at a price tag easily double what Ruger’s new revolver is retailing for.

I only fired a few rounds from the Match Champion during our range day at SHOT, but I was quickly impressed. It’s incredibly well balanced and the double action trigger was smooth and light. In fact, it felt a whole lot like shooting my S&W 686 SSR. Astute readers will notice the “SSR” in the Smith’s model name — yes, it stands for “Stock Service Revolver” and it’s S&W’s IDPA-themed revolver; a direct counterpart to the Match Champion. Smith & Wesson has been producing the 686 SSR for a few years now, and while it’s a great revolver, it’s honestly not dramatically different from the standard 686. That’s not necessarily a bad thing since the S&W 686 is just better suited to competition use right out of the box than a stock GP100. But with this effort, Ruger has really gone out of their way to give the Match Champion some competition-oriented features (see the above list for details). 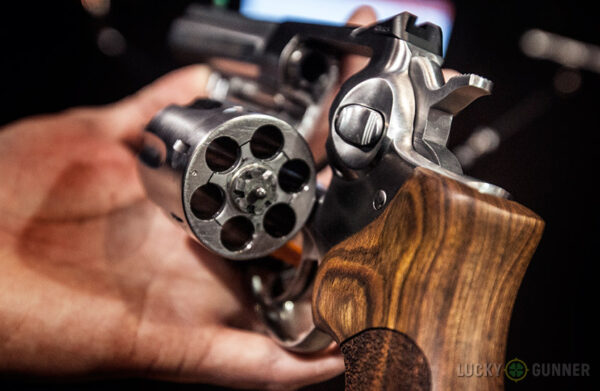 As popular as IDPA is, however, most of us are not competitive revolver shooters. But that’s okay, because the things that make the Ruger GP100 Match Champion a good IDPA revolver also make it a great revolver for just about any other kind of shooting. Smooth action and trigger, great sights, and excellent balance — everybody can appreciate that, right? The one downside to the changes made for the Match Champion is that it’s not quite as pleasant to shoot .357 magnums as the standard GP100. On paper, there’s only a difference of 2 oz between the two, but the heavy underlug of the standard GP100 really goes a long way to tame the magnum loads. Firing magnums is still not a terrible experience with the Match Champion, but I’ve always viewed the mitigating effect of the GP100’s underlug to be one of the more attractive selling points for the Ruger.

If you’re a wheel gun fan but you’ve been overlooking Ruger for some reason, be sure to handle the Match Champion the next time you get a chance. I think a lot of S&W fans will be pleasantly surprised, and a few might end up being converts.

Lucky Gunner: So it sounds like you guys have done a lot to make this GP100 different. This is a lot more than you could do with a standard GP at your kitchen table with a dremel, right?

Kurt Hindle: Yeah. This really is — even though it’s coming out of our factory — a custom gun. It’s a lot more than just a standard GP100 and a lot of thought and a lot of care and detail went into the way this was set up and built.

LG: I got a chance to shoot a couple of cylinders through this at the range the other day and the first thing that struck me was just how light it is compared to the standard GP100. Where did you guys shave the weight off?

KH: We took weight off the top strap, both on the frame and on the barrel and then slabbed the sides of the barrel and went to a half lug. All of that takes the center of gravity and brings it back farther toward the shooters hands and just balances it better. Because it’s not front heavy, it also makes it feel lighter.

LG: But you haven’t sacrificed any of the ruggedness or the longevity of firearm in doing that, right?

KH: It’s still a Ruger. It’s built to be a rugged, reliable firearm, and it does do that. It’s well put together and it will handle hot .357 loads and you can shoot .38 specials out of it. It’s able to withstand a lot of abuse and a lot of shooting.

LG: Is this dovetail for the rear sight a standard size in case you want to put a different rear sight in there?

KH: It is a standard dovetail. It’s similar to what we use on our 1911 — it’s basically the same dovetail.