If you’ve ever had to take a state-mandated shooting qualification test to get a handgun carry permit, you may have found it to be… not particularly challenging. But was it easy enough to pass while blindfolded? John and I tried it out using the test issued by the state of Texas, which is considered among the most difficult state-level tests (not that that’s saying much). Then we talk about the problems with easy-to-pass permit tests and why they probably shouldn’t exist at all. Details in the video below, or scroll down for the full transcript.

CHRIS: Hey everybody, Chris and John here for another episode of “Stuff John and Chris Wanna Know.” John, what is it we want to know today?

JOHN: I just want to go on record as saying this was your idea.

CHRIS: It was my idea. I’ll fess up. And in my defense, John was 110% onboard when I mentioned it.

JOHN: I absolutely was. But I just want to be clear because I get blamed–

CHRIS: Tell them what it was.

JOHN: We want to know if we could take one of the harder, if not the hardest — so, we couldn’t really figure out what the hardest one was — but if it would be possible to take a state level CHL or CCW (or whatever acronym your state uses) live fire qualification and pass it blindfolded.

CHRIS: Right. Because this is something that, you know, anyone who’s remotely accomplished as a shooter looks back at their concealed carry class like, “man, that was easy. I probably could have passed that blindfolded.” So we decided to see if we could actually do it.

We chose the Texas handgun qualification, which, I won’t give you the whole course of fire, but it’s basically timed strings of fire at three, seven, and fifteen yards, fifty shots total. Fairly simple, even with the fairly generous time restraints. We shot it sighted and both cleaned it, 100%, no problem. Then we did it blindfolded. John passed it on the first try with some minor coaching from me. And then — the state of Texas gives you three tries to pass it — it took me all three tries but I did pass it on my third try with a lot of coaching from John but was able to get there. 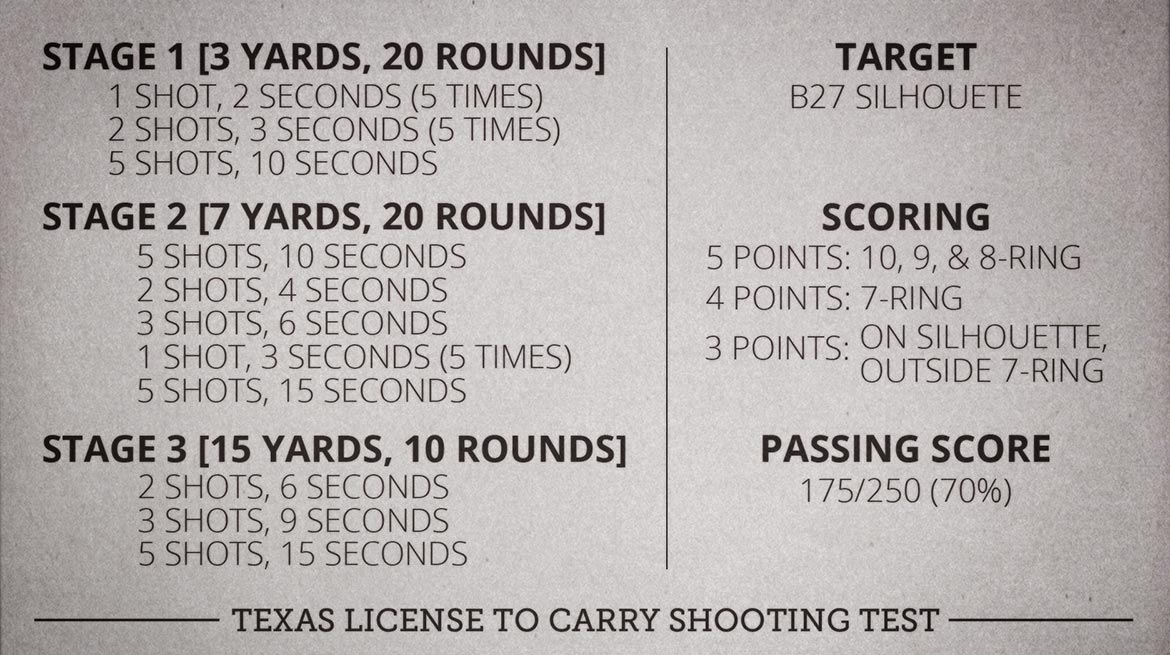 JOHN: Yeah. And I firmly believe, had I been in a traditional shooting range where I’ve got a bench in front of me and a lane that I’m in, something to just sort of be able to kind of true myself to–

CHRIS: Some kind of physical index…

JOHN: Yeah, it would have been even easier. What makes this one so easy, if you know what you’re doing, is the target that they’re using and the time standards are very generous. The entire purpose behind this is not to take away from people that had a hard time passing this and worked up to passing it. That’s a great accomplishment. Any time that you start one place and improve yourself to another place — I’m 100% for that. 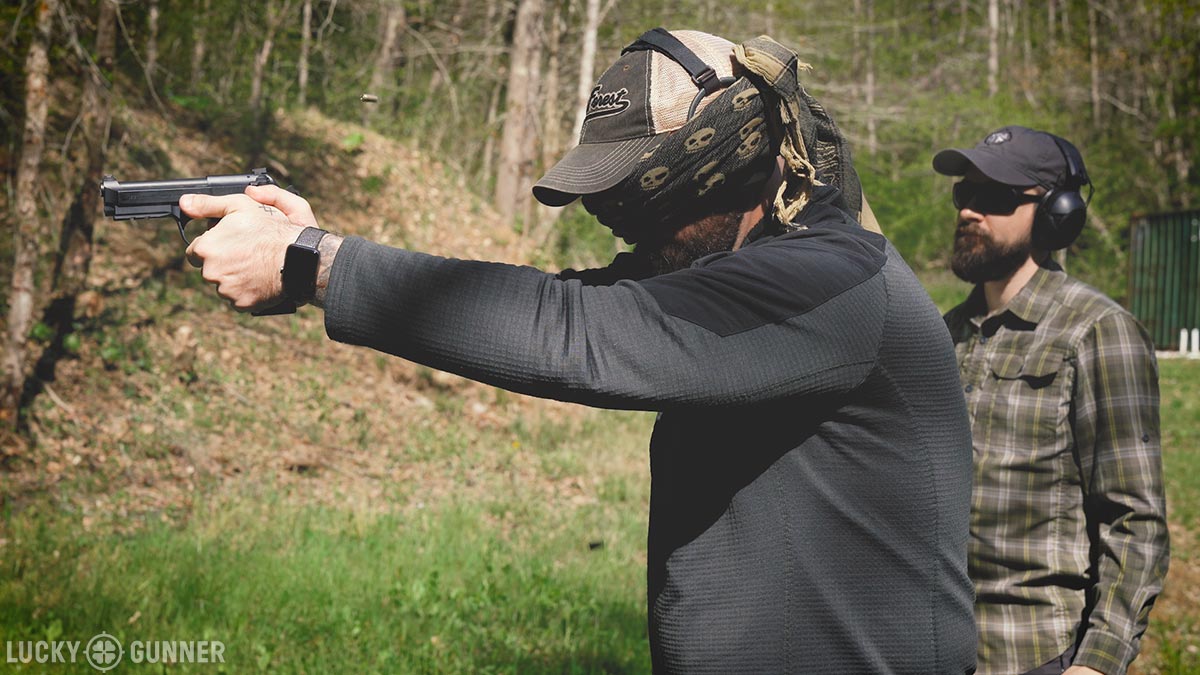 CHRIS: It’s supposed to be a demonstration that you are proficient with a handgun.

JOHN: Yeah, proficient enough to carry a handgun and, I don’t know, Chris, what do you think about the state being involved in that process?

CHRIS: All right, guys, so we are dangerously close to getting into political territory here which is something that we try to avoid at all costs because we welcome people from all parts of the political spectrum. But whether or not you believe the state has any business telling me what I am and am not qualified to do, the state is obviously not very good at it. So they’re not really qualified to tell me whether I’m proficient because the state test is not a good measure of technical proficiency with a handgun, nor is it a good measure of whether you’re competent to carry a handgun, which are two separate things. 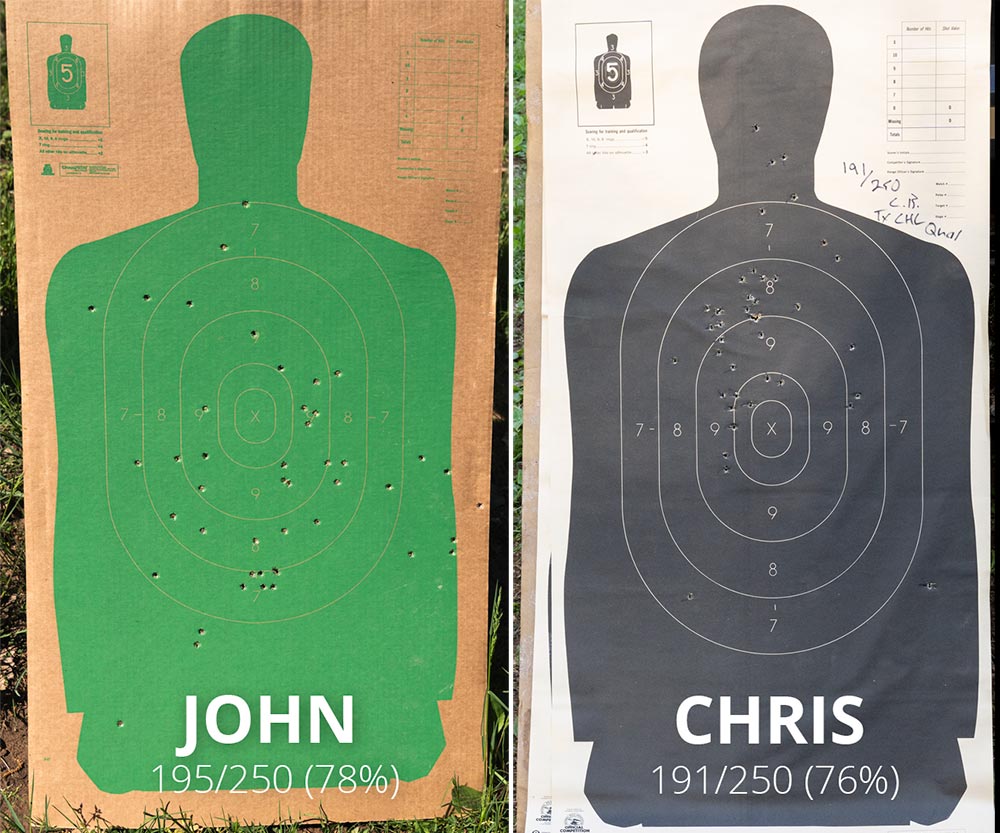 CHRIS: And again, political philosophy aside, this test, if someone takes it and passes it, the problem is that it gives them — it could give them a false sense of security. “Oh, I passed the test. The state says I’m qualified,” when you clearly are not and you need more training, you need more understanding of the broader spectrum of things that need to happen in order to make you competent and safe with a handgun. The test doesn’t really do that.

We are not saying the test should be more difficult. Honestly, if anything, there should be no test because again, political philosophy aside, if there is no test, at least the person can’t think, “oh, I’m qualified because someone said I’m qualified” and maybe then they will go out and seek some training versus the person who has the worst possible “qualification” and has a false sense of security.

JOHN: Well, and the other thing, too is you can look at the numbers from the states that don’t require any live fire training and, frankly, there’s not blood in the streets, there’s not chaos. 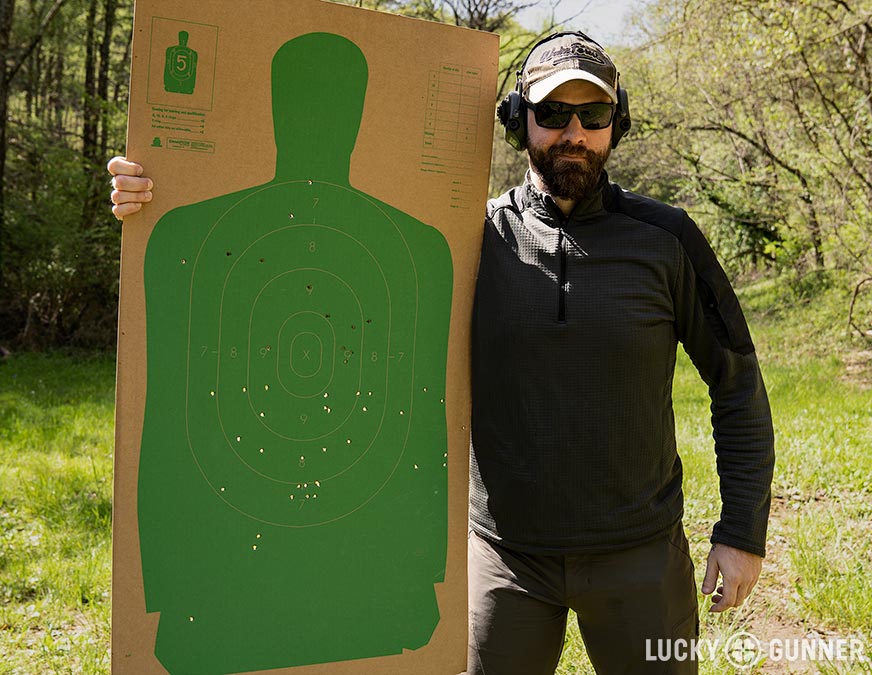 CHRIS: You can’t point to any significant difference.

JOHN: You can’t, even a little bit. And I will get semi-barely kind of a tiny bit little tiny kind of political and say that it’s a right. It’s a right. There isn’t a test to exercise a right and if there was then, before everyone hops in the comments and says whatever they’re going to say (and I’m sure it will be constructive and we will appreciate it very much), there should be a test before they’re able to do that. But there isn’t because that’s not how it’s supposed to work.

CHRIS: Mandatory, state-mandated training. So, there you go.

Today, we're talking to a couple of actual ammo experts (not just a pretend internet expert like myself). I recently...