According to The Internet, the way I hold non-pistol grip long guns is strange and confusing. Spitting in the face of millennia of human evolution, I choose to ignore the gift of the opposable thumb and let my fifth digit simply hang limp on the side of the stock like some kind of savage. But there is a reason I use this “thumb-forward” technique. Four reasons, actually. I counted them. See, I’m not so primitive after all!

Hey everybody, Chris Baker here from LuckyGunner.com. It is, once again, time for a Q&A video. Today’s question is one that’s been asked by several viewers. It has to do with a specific shooting technique I use. Whenever I’m shooting a shotgun or a rifle that does not have a pistol grip, I rest my right thumb along the side of the stock rather than gripping it around the tang. Any time I post a video that shows me doing that, at least a couple of people will ask if there’s a specific reason I grip the gun that way.

Sometimes they’ll suggest that I might have more control over the gun if I were to wrap my thumb over the top. One gentleman went as far as to call that technique “politically correct BS.” I cannot begin to imagine what kind of conspiracy theory led him to that conclusion. That said, most people asking seem to be genuinely curious about the technique, so I am happy to explain it. 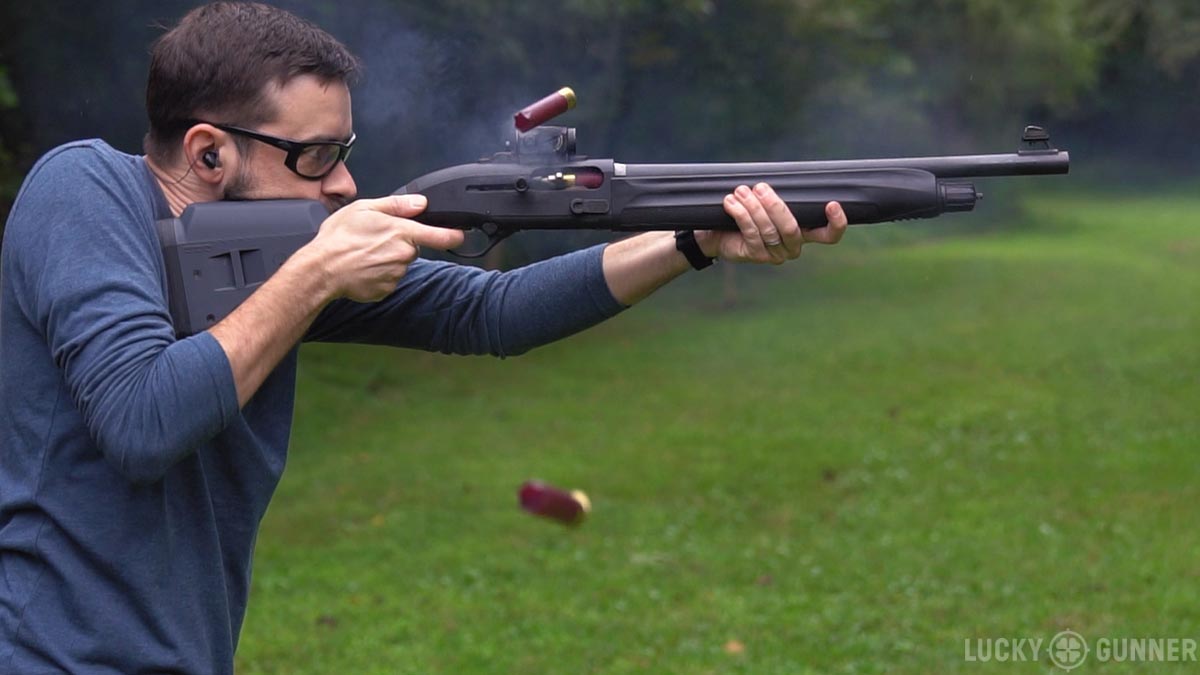 I do not use this technique on long guns that have a pistol grip. For those, I use a conventional technique with my thumb wrapped around the grip. For almost all other long guns, I typically rest the thumb in a forward position.

This is not my technique. A lot of people grip long guns with the shooting-hand thumb forward. It is certainly nothing new, it’s just not how most people do it. I don’t know if it has an official name. For now, I’ll just call it the thumb-forward grip. Technically, there are several different ways you can grip a long gun that involve a thumb-forward position, so there’s really not just one thumb-forward grip.

I’ve seen different instructors teach a thumb-forward position for different reasons depending on the context and the type of gun. I don’t believe this is an issue of correct versus incorrect technique. Plenty of people shoot really well with both thumb positions. But it’s probably something worth trying out to see if it offers any advantages for you.

In my case, I have found four major benefits to shooting long guns with the thumb forward.

The first one is that it prevents me from getting smacked in the nose by my own thumb when the gun recoils. This mostly applies to shotguns, but can also be an issue with lightweight or large caliber rifles.

If you have a good stance and mount the gun properly with a stock that’s the correct length for you, this really shouldn’t be an issue most of the time. The gun shouldn’t move enough for you to get popped in the nose with your thumb. But if I’m helping out someone who’s new to shotguns, I’ll suggest they keep that thumb straight because I know there’s a good chance at some point over the course of that range session, they will have an imperfect mount or stance. If they use the thumb forward technique, they can still get a bruised shoulder, but they won’t have a bloody nose to go with it.

Even for an experienced shooter, if you ever get into some more advanced training exercises or something like 3-gun competition, you might find yourself shooting from awkward and unconventional positions. Or you might be shooting under intense time pressure. Your stock might get hung up on a heavy jacket when you’re trying to mount it in a hurry. You can’t always guarantee that you’ll get a perfect mount. The thumb forward technique doesn’t fix any of that, but it mitigates some of the consequences of taking a shot under less than ideal circumstances. Nobody likes to punch their own self in the face and this is a good way to avoid that.

The second benefit I’ve found to a thumb-forward grip is that it allows smoother operation of bolt action and lever action rifles. Notice that I said “smoother” and not “faster.” I cannot guarantee that I can cycle a bolt or lever any faster with my thumb forward. I have seen cowboy action shooters run lever actions with their thumb forward, and they’re incredibly quick. If you’ve ever seen someone do the mad minute with a bolt action Enfield, they use an unusual technique where they leave the thumb and forefinger on the bolt and pull the trigger with their middle finger. I guess that’s kind of a version of the thumb forward technique.

But I don’t do it because I think it’s faster. I do think it’s smoother. When I am trying to cycle the action quickly, the thumb forward does seem to help prevent fumbling. It’s a more efficient motion with the thumb forward. It’s less movement and there’s less opportunity for me to mess up and do something weird with my thumb that will cause me to short stroke the action or make some other mistake. 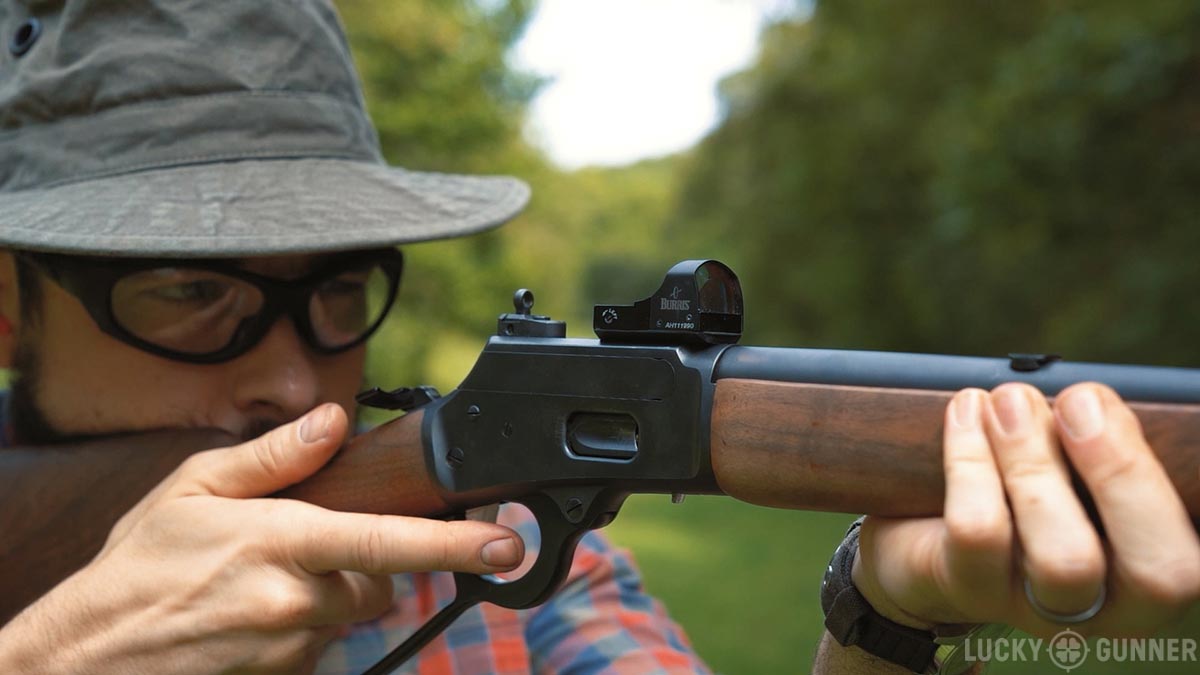 It also allows me a little more freedom in how I have my hand and wrist positioned. That’s especially helpful with a lever gun because I can sometimes get a better angle on the lever to cycle it more reliably.

Another aspect of smoother operation is manipulation of the safety. This applies mostly to bolt actions. The majority of modern bolt actions have a safety positioned somewhere just behind the bolt handle. A thumb forward grip puts my thumb in the perfect position to flip that safety on and off. And I always know what position the safety is in because I can feel it. A slightly modified thumb-forward position also works pretty well for guns with a safety on the back of the tang like the Ruger American and Mossberg 500 series shotguns.

The third major advantage of a thumb-forward grip, for me, is trigger control. For rifles and shotguns, I like to press the trigger using just the pad of my index finger. Depending on the shape of the stock, that’s not always easy to do if I have my thumb around the tang. For my hands, the trigger reach tends to be too short. I end up with my trigger finger bent in an awkward way, or I have to use my first joint to pull the trigger. That’s not really a big deal if I’m just hosing targets up close. But if I need any kind of precision, I prefer to use less finger on the trigger. 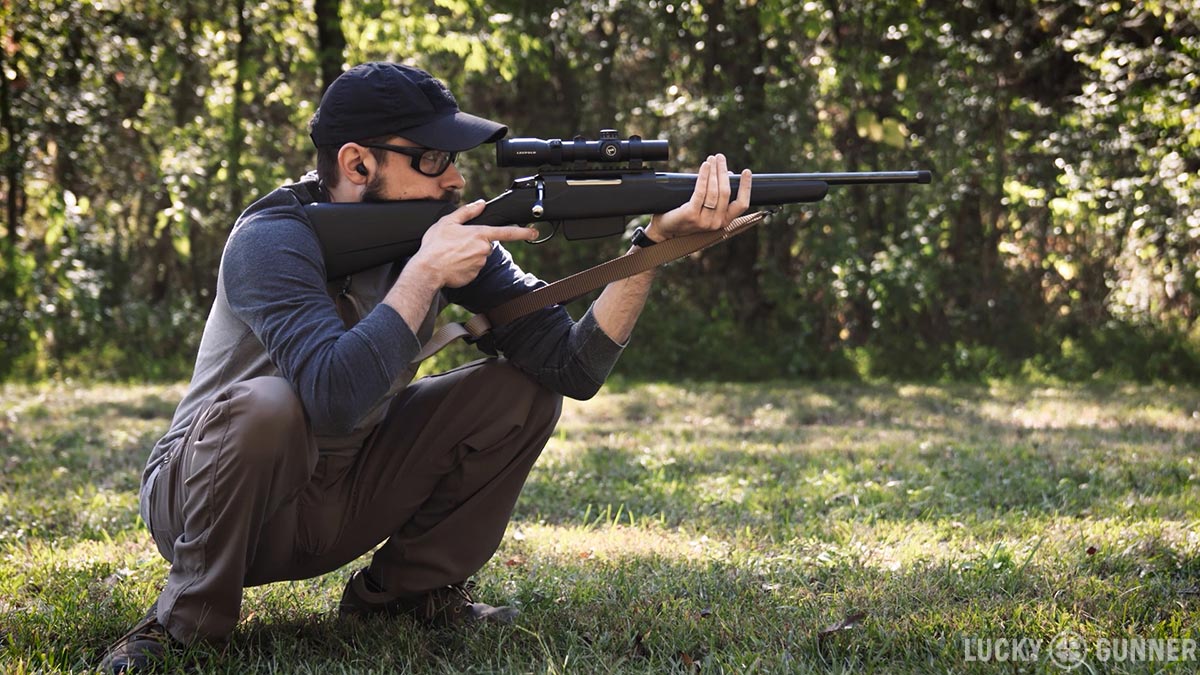 With my thumb forward, I can shift my whole hand to the rear, away from the trigger. That way, I can get just the pad of my finger in contact with the trigger with the rest of my index finger relatively straight. For me, that makes it a lot easier to get a clean trigger press straight to the rear without disturbing my sight picture. That’s a solution to an issue that’s very specific to my hand size and shape, which is just one reason why I don’t expect this technique to be right for everybody.

And speaking of benefits that don’t necessarily apply to everyone, the fourth and final reason I like a thumb-forward technique is that I just find it to be more comfortable. The wrist angle I get with my thumb forward feels better to me. It’s far more comfortable when I’m shooting from a bench or a prone position. I really don’t do either of those things a whole lot, but it is convenient to have just one way to grip the rifle regardless of what position I’m in.

Gun Control (But Not That Kind)

As far as I can tell, the main objection or concern people seem to have about this technique is that it might result in less control over the gun.

To be completely honest, I’m not sure what, specifically, people mean by “control.” If they’re talking about recoil control or recoil management, it’s a non-issue. I don’t manage recoil with my thumb. I use the push-pull method for that. Just before I fire, I push forward on the forend with my support hand. With my firing hand, I pull the stock into my body. That’s done with the bottom three fingers of my firing hand. The thumb doesn’t help me there.

If people are concerned with control in the sense of supporting the weight of the gun, again, the thumb doesn’t help. At least not when I’m in a firing position. If I need to hold the gun with just my firing hand, then I will wrap my thumb around the back of the tang. When I’m shooting, it doesn’t really do anything for me, though.

Here’s a clip from a couple of weeks ago when I was experimenting with reloading techniques on the M1 Carbine. Without consciously thinking about it, any time my support hand came off the rifle to grab a fresh magazine, my firing hand thumb just shifted to the back of the tang to help manipulate the rifle. 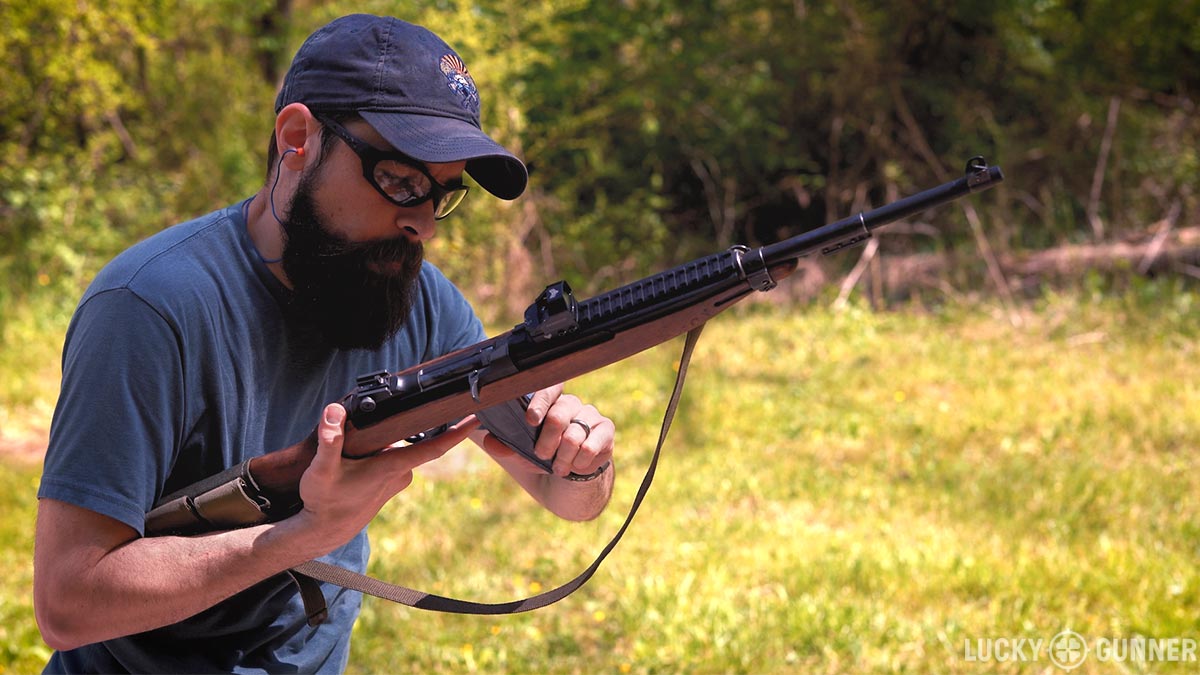 There is one sense, that I can think of, in which a thumb-forward grip would give you less control over the gun. That would be in the case of some kind of gun grab situation. If I had the gun mounted and someone took me by surprise and tried to yank it out of my hand, then yeah, I would probably stand a better chance of hanging onto that gun if I had my thumb around the tang. But considering the likelihood of that event and all the other advantages I get from using a thumb forward technique, that’s a risk I’m willing to take.

Whether or not you decide this technique is for you, I hope you guys found some of that to be helpful. If so, do me a favor and subscribe to the Lounge newsletter. And, of course, if you have any questions you want me to tackle here, send me an email through our contact form.

A few weeks ago, we looked at whether red dot sights are a good idea for a concealed carry pistol....