Start Shooting Better is back! After numerous requests, John and I have filmed a few more videos outlining shooting drills and tests for you to try at the range. This one involves hitting 8-inch bullseyes and one-inch squares, but it’s only from five yards away. Should be easy, right? Try it out and let us know what you think. Details are in the video below, or you can scroll down and read the full transcript.

CHRIS: Hey guys, Chris here from LuckyGunner.com with John Johnston from Citizens Defense Research and this is Start Shooting Better. We’re back by popular demand. You guys have asked for more of the drills and tests we’ve been talking about so we’re going to do another one today and this one is one that John himself came up with called The Test With No Name. John, tell us about it.

JOHN: Well, the first thing people generally ask is “why is it called The Test With No Name?” Because I wanted to call it something else — a popular actor who may have starred in quite a few movies…

JOHN: Yes. Is that… I don’t think that rhymes.

Oh, the other thing, this is meant to be shot from concealment. So if you’re running it from an open-top holster that does not have retention, [add .5 seconds to your total time.]

“But John, what if my gun doesn’t hold 12 rounds?” There’s a 10-round version where, instead of firing five rounds on the bullseyes, you fire four and that adds a .5 penalty.

“But John, what if my gun doesn’t hold 10 rounds?” You need to get into this millennium, at least. 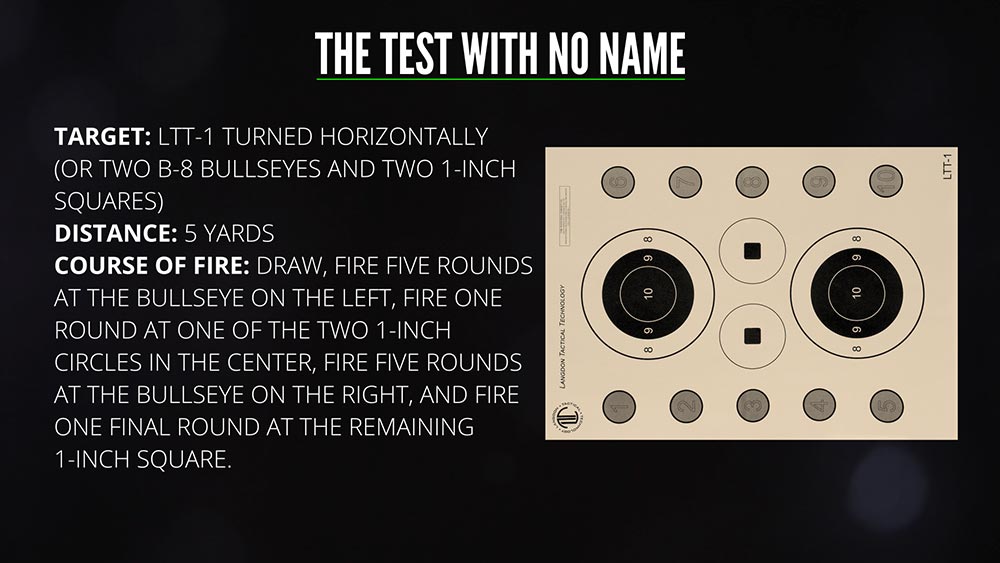 CHRIS: I’m gonna shoot it with my J-frame.

JOHN: You can do that…

JOHN: There you go. That’s how we’ll do that. So anyway, the way scoring is handled is anything inside of the black of the bullseyes…

Just for tracking purposes, if you miss it, I’ll add plus one second to the time just so I can track over time what my scores look like. And the same thing if you launch a round out of the B-8, out of the 8-ring, each one of those will be now a plus one second. And that’s just for performance tracking. It doesn’t matter in the class because if you DQ, you DQ. 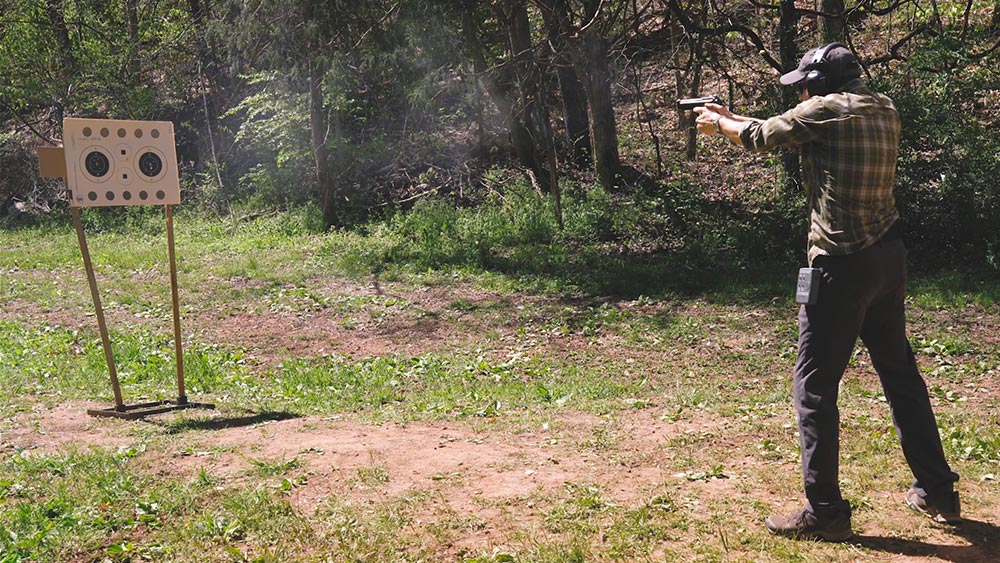 When I run it in class, the scoring is just simply whoever does it the quickest, clean, wins. It’s meant to be run twice. If you disqualify in the first run then you get to try it again.

If you’re going to run this at home, what I would do is run it twice and either way, if you DQ or don’t DQ and just kind of see where you’re at.

CHRIS: I really like this drill and one of the big reasons why is because of the changing gears aspect of it. I think it’s a really important skill to have because, you know, once you develop some proficiency, drawing and burning five rounds into a B-8 should be pretty much something you’re accustomed to doing but then, changing gears to hit that one inch and then fast again and back to the– So, it’s quickly, carefully, quickly, carefully. It really requires a lot of restraint and discipline.

JOHN: Yeah, emotional control, which is one of the points of what I’m trying to get people to be able to do.

CHRIS: And just to give you guys an idea of the difficulty, when we shot it yesterday, we each shot it just twice and…

CHRIS: DQed four times. And I had– my last one, I was really excited about it and the last shot, I pulled it. The second the bullet left the gun, I knew it was low and it was– I probably screamed on camera, I’m not sure. It’s really frustrating. 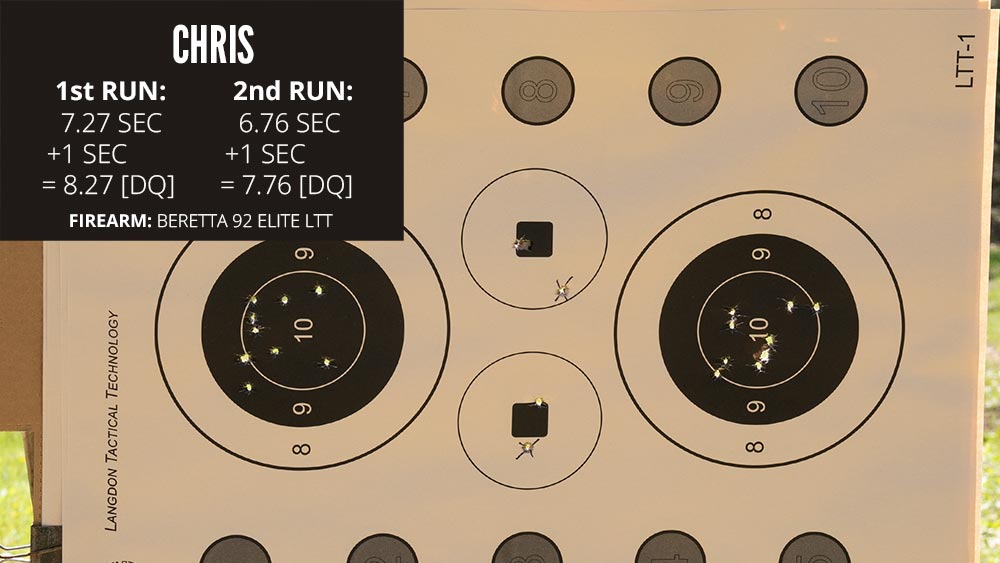 JOHN: I think you did. So there are some par times with this. The one that I’m going for and the one that’s important in the class (and there’s an award associated with it), the score standard for that is if you can shoot it clean under six seconds twice, you will be awarded this… thing that has not yet been created yet but I know it’s going to be created and it will be numbered. The funny thing is, I haven’t been able to do it in class either. It’s a difficult, difficult standard.

CHRIS: But I should say, it’s also doable. Having done it, I can see — you know, I’m not saying I’m going to get it anytime soon, but it’s definitely within the realm of reason. I think you could do it, it’s just, to do it two times in a row, those one-inch squares will really mess with you.

Before you’re going for times, you should be going for clean because, frankly, it’s not easy to shoot clean. The thing that it should not turn into is something like a Dot Torture thing where, “Oh, if I shoot this in 60 seconds, I can shoot it.” Nuh uh. 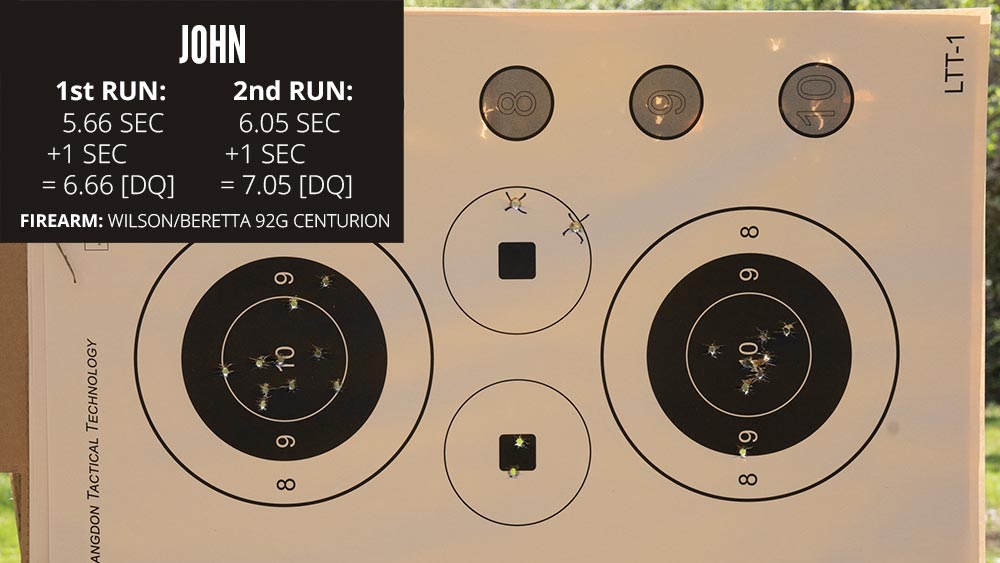 And one of the things that we’re working on here is — [in addition to] getting the grip right out of the holster, getting the presentation right, getting the transitions right — not looking at the sighting system for too long. So, I’m not saying not to be focused on the sighting system. I want people to “aware” on the sighting system, but I don’t want them to over-confirm it. To do well at this you need to pretty much, as soon as you are aware that you have seen what you need to see to hit the one-inch square, you press the trigger and move on to the next thing. That’s where people fall down. The number of people I see that will have the gun up in front of them and they’re sighting on the one-inch square and just sitting there trying to figure it out and then they finally say, “okay, I should shoot now!” and they don’t hit it. If you see what you need to see, it’s not going to get any better the longer you look at it. It will probably get worse. And that was one of the big teaching points from the class and one of the reasons why this is now a thing in existence.

This is something where, if you’re wanting to really shake down your gun, I think this is a pretty good way to do that. This is not something where it magically gets easier the more you do it. I mean, it gets somewhat easier the more you do it, but it’s still a tight target pretty quick, no matter what. If you can get good at hitting tight targets really quick, you’re good at a lot of things.

CHRIS: So that’s The Test With No Name. You can shoot that on the Langdon targets or we’ve got a printable target you can use. It’s got a single B-8 on it, you just use that for both the B-8s. Give it a shot and let us know how it goes.