Five yards. Four strings of fire. Ten rounds total. This quick and challenging shooting exercise is a great way to test your handgun skills. Watch the video for the details and to see our demos of the drill. As always, you can also scroll down and read the full transcript, instead.

Download and print your own B-8 bullseye target for this drill here (PDF).

CHRIS: Hey guys, Chris here from LuckyGunner.com. I’m here with John Johnston from Ballistic Radio and Citizens Defense Research. We’re doing another episode of our Start Shooting Better series. Today we’re doing the Five-Yard Roundup. This is a drill that both John and I got to do at the recent Rangemaster Tactical Conference. It’s a fun little short drill, but really challenging. John, why don’t you give us the outline of what that looks like. 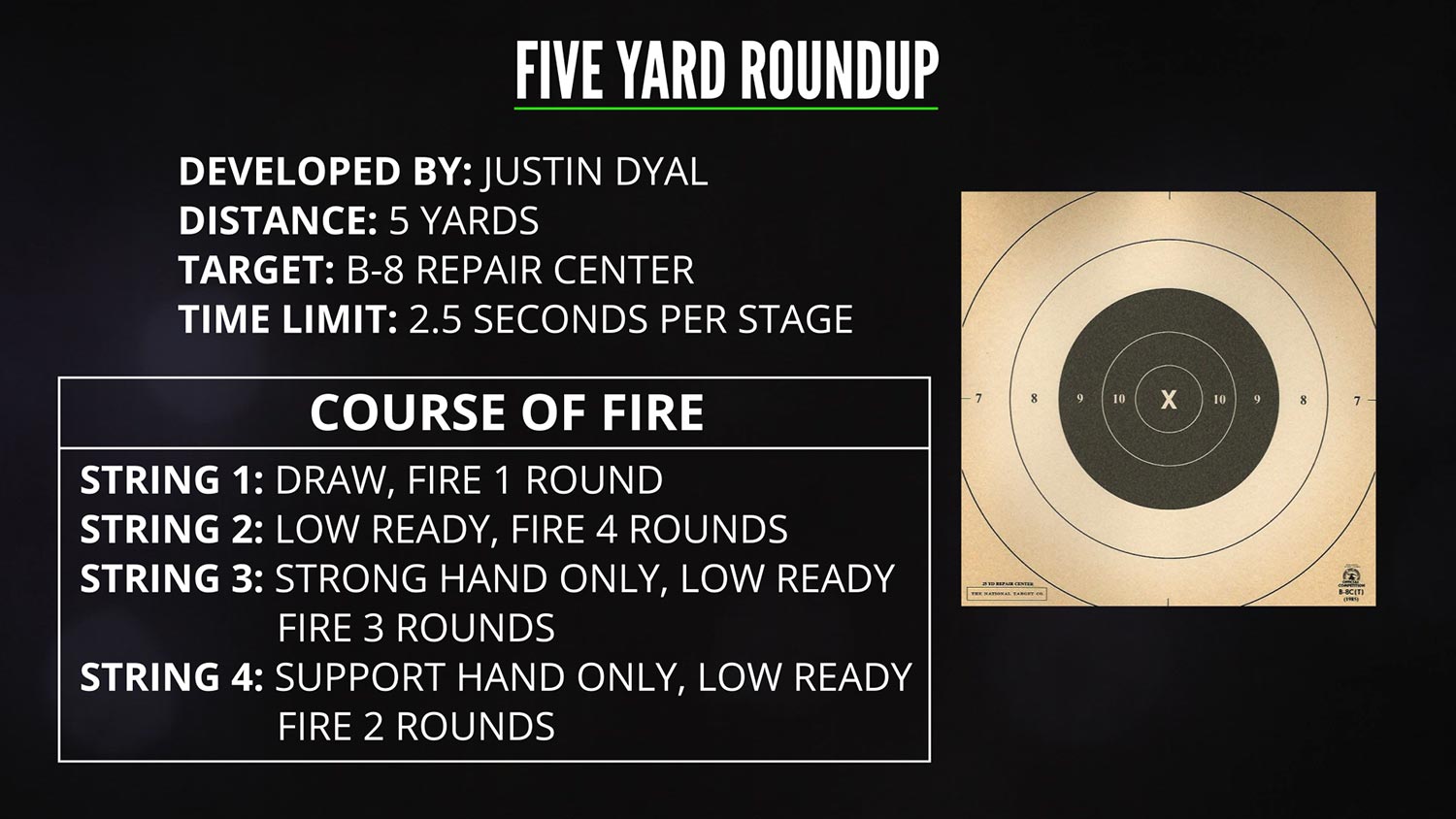 CHRIS: And when we did it at the Rangemaster conference, they were using turning targets, so you can’t actually see the bullseye until you’re allowed to shoot it, so that adds an extra element to it. But you can do it with just a timer.

JOHN: Yeah, you can do it just with a timer. I had actually not shot that before, so the first time I had ever seen it or shot it was Rangemaster… cold. And I’m like “Ahhh!” So it was really fun, I’m glad we decided to do it today, too. 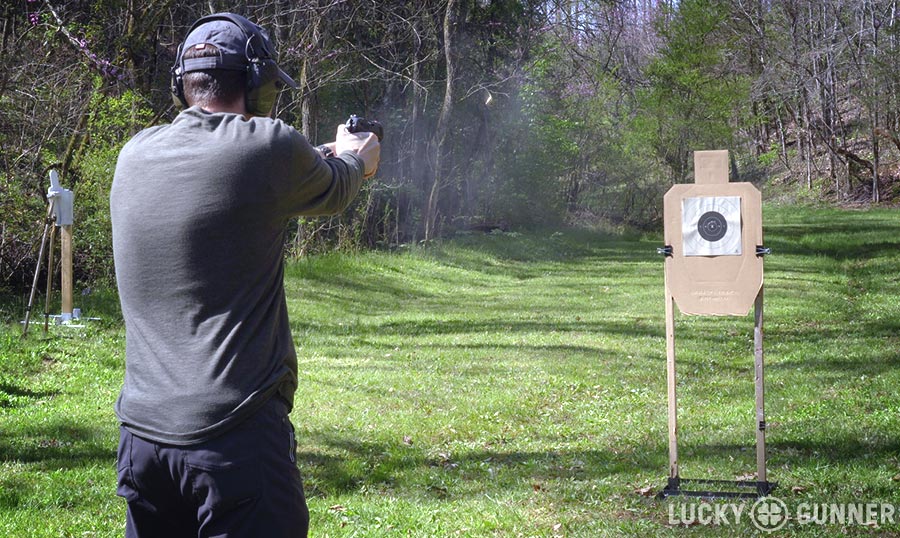 CHRIS: It’s kinda brutal becuase it’s only ten rounds, so if you throw one shot, your whole score is tanked. And that’s why they used it, I think. It was part of the match they had there, and it was to narrow it down to the top few shooters who would compete in the last leg of the match.

JOHN: Right. Justin Dyal came up with this and I was reading over his description of it that was published and he noted that a lot of people are either practicing at longer distances or giving themselves very generous time frames and that does not reflect the reality of what we’re seeing in encounters off of closed circuit TV and body cameras and stuff like that. It’s a lot harder than it seems and it’s very important that you stay aggressive on the gun the entire time, only see what you need to see, but you still need to get your hits.

The way it works is you have 2.5 seconds and a imperfect hit in 2.49 is better than a better hit in 2.5 because the way the drill is scored, every round you fire after the 2.5 second time limit, you get 5 points off. It’s an incredibly useful tool for figuring out where the line is between “I’m going as fast as I can” and “I’m still getting my hits.” The entire purpose of that is so if people find themselves in a close range encounter, they’re dominating that encounter from the very beginning instead of trying to catch up afterwards. 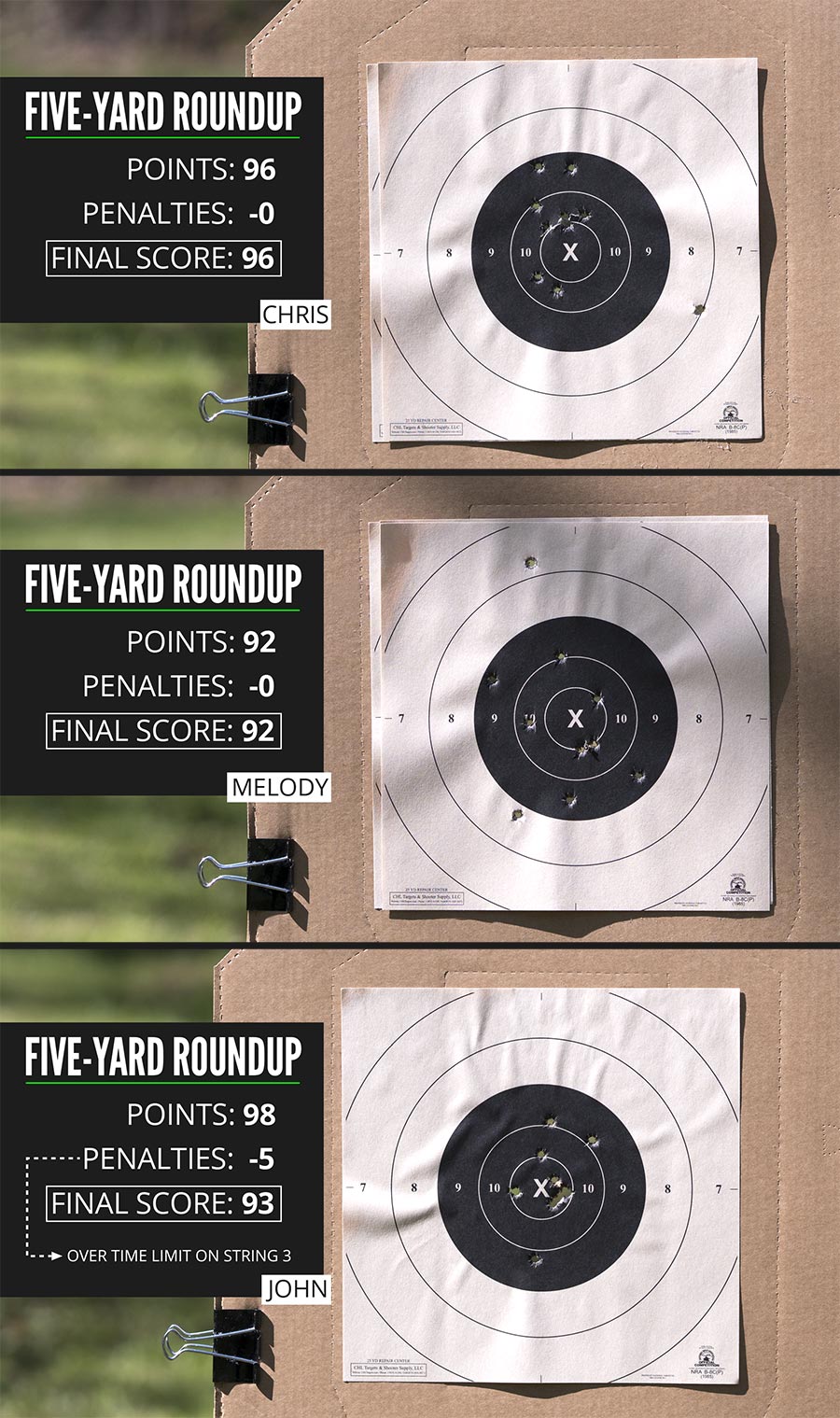 CHRIS: Let’s talk about one little technical aspect: low ready. There seems to be some confusion about what low ready is — some people have different interpretations of that. I interpret low ready as, basically, you start [at full extension] with the gun pointed below whatever your target is.

JOHN: Right, there are a couple of different variations of that depending on what you’re doing and where you’re doing it. The traditional one is that [your muzzle is pointed] just down at the base of the target. In a real world context, you want to be able to see the belt and hands — the waistline of whoever your pointing the gun at. You can run whatever variation you want to run, just make sure you’re not aimed in at the target when you start.

CHRIS: Alright, well that is the five yard roundup. Get out there, give it a try, and let us know how you do.

How does your score on the Five-Yard Roundup measure up to a pro shooter’s? Karl Rehn breaks it down in this post on his blog.

In the final installment of our mini-series on appendix carry (AIWB), we're taking a look at some of the common...